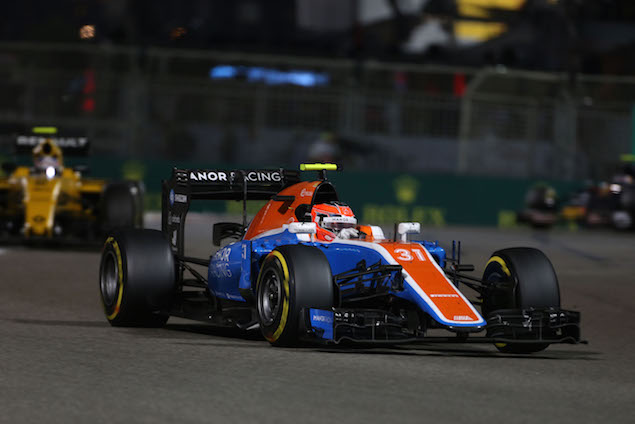 Esteban Ocon
“I’m really pleased. It was no secret that I was really frustrated after qualifying yesterday, so I was really fed up to be on the 10th row of the grid. Then I got a really good start and made up three places on the opening lap. I was running as high as 11th during the race and we were looking really good versus the Saubers. I had the pace to get past Nasr but we touched and actually I lost my front wing end plate. I pitted for a second time and was able to catch right up with my team-mate before I eventually got by. Nevertheless, we got both cars home in strong positions to end the season on a strong note. It wasn’t enough to make up for Brazil but I think we can say that we did the best job possible over the past two weeks, so I’m happy.

“I can’t thank Manor Racing enough for giving me this incredible opportunity to begin my F1 career. It has been a real pleasure and I have learned so much in every area that will be important experience for the rest of my career, so I will always be grateful for that. Although I will be racing elsewhere, I will always be rooting for Manor as the team has so much potential. Maybe one day soon we can have a friendly fight together on-track.”

Pascal Wehrlein
“It was really great to end the season with another strong race performance. I had a difficult first pit stop and I was quite far back after that, so it was pretty frustrating after a great qualifying and starting from 16th on the grid. I fought hard to come back from that and we even gained a few places along the way. I was on a different strategy so it wasn’t possible to prevent my teammate from passing me at the end because I was on really old softy tyres, but at least we finished ahead of Sauber one final time. It was a fantastic race to end the season and my thanks to the whole team for the way we have fought together right to the end.”

“I had a really, really great first season in Formula 1, thanks to everyone at Manor Racing. I guess it makes me sad that we held onto our point for so long but lost 10th in the Championship. It was really unlucky for us but I think we will always remember that day in Austria and celebrating together. My thanks to everyone in the team for all the hard work and pushing so hard so we can make some real progress together.

Dave Ryan, Racing Director
“Well, it’s hard to believe that the 2016 season is finally over but I think I speak for everyone when I say a few weeks at home without the pressure of preparing for the next race will be very welcome indeed.

“First and foremost, huge congratulations to the entire team both here and back at Banbury for the effort that has gone into this season. It hasn’t been easy but when you look at just how far we’ve come in the space of 12 months, our improvement is incredible and something to be really proud of. Having said that, we know we still have big strides to make, but it’s a challenge we are all looking forward to as we strive to move Manor up the grid in 2017.

“I would also like to express our gratitude to our technical partners, Mercedes AMG High Performance Powertrains and Williams Advanced Engineering, and all our Team Partners, for their fantastic support during our 2016 campaign.

“Finally, special thanks to Pascal and Esteban. Another great race today and no less than we have come to expect from the two of them.”