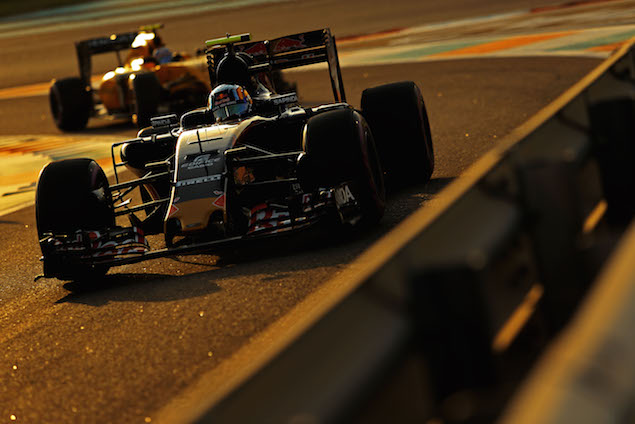 Carlos Sainz
“I think it was a positive race up until the accident: I was racing in P14 after staring from P21, overtaking the Manors, Saubers and Renaults… So it was being a good, clean race, but it’s just a big shame that Palmer hit me from behind! I was really enjoying myself and I’m also happy with the fact that we managed to recover well after what’s been a very challenging weekend. It’s just a pity that we were not able to finish the season seeing the checkered flag, but it’s been an amazing 2016 and I’m very happy and proud of my season overall. I take home 46 points, a number I would’ve never said at the start of the year! So I think we can all be very pleased. I’m now very much looking forward to 2017! I’d like to thank the whole team for all the effort and hard work, it’s been an unforgettable year and we couldn’t have done it without each other!”

Daniil Kvyat
“It’s a shame we had to retire, as the race wasn’t looking that bad after only having completed five laps in the practice sessions… We were fighting with Haas and Renault and I had a lot of fun, recovering many places at the start and overtaking a few more later on. It’s unfortunate that we had a gearbox issue which meant I had to stop the car, retire from the race… So I decided to go for a stroll on a push bike! … It’s like my whole season has been summed up in one race weekend! J. I’m now really looking forward to 2017, but first it’s time to rest a bit, spend some time with friends and family before training very hard over the winter in order to come back stronger than ever next season. I’m feeling confident, which is a good way to end the season and this is what I will take into the new year. Finally, I’d like to thank the team for supporting me during this year full of ups and downs – I’ve felt they’ve always been there for me and that we’ve kept growing together until reaching a point where I feel very comfortable, like at home. This is something very valuable for me and it will definitely help me next year, when we will push again all together.”

Franz Tost, team principal
“First of all, I’d like to say that it was an exciting race and I congratulate Nico Rosberg for winning his first Formula 1 World Championship! Regarding our race today, it wasn’t the result that we were expecting here in Abu Dhabi, because not finishing with both cars is quite disappointing. Daniil, who was really well placed and driving a strong race, suffered a gearbox problem and therefore had to stop the car. Until then, he showed a really good performance. Unfortunately, Carlos’ race also ended prematurely because of Palmer crashing into him. The gearbox got damaged and he therefore couldn’t continue racing. This was definitely not our weekend – we already had problems on Friday with what seems like being a rear suspension issue. We still need to investigate this, even if next year it will look completely different, we need to know why this happened. We will now work very hard over the winter in order to be prepared in the best possible way for 2017.”