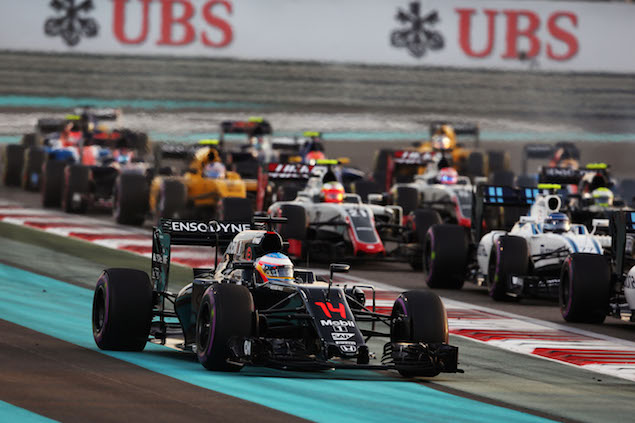 Fernando Alonso
“The race was good; fun, but difficult as well.

“There wasn’t really much I could do against the Force Indias and the Williams, but I fought until the last lap and got quite close, so I’m happy with the point we scored today, and pleased that we secured our positions in the constructors’ and drivers’ championships.

“Overall, this season has been positive: we’ve shown big progress compared to 2015, but we want to win the world championship – and there’s still a long way to go before we can achieve that. Still, we have a long winter ahead of us, and we’ll make a huge effort in order to arrive in Australia with a more competitive package.

“It’s a shame that Jenson’s final race came to an early end, but he’ll still be around next year, and he’ll be a huge asset for us in his new role.

“Finally, I’m very happy for Nico [Rosberg]. He’s had a fantastic season and he deserved to be champion. He always believed in his possibilities and he managed his advantage perfectly. Both he and Lewis did a great job but it was time for Nico to win this year, as Lewis has three titles already!”

Jenson Button
“A suspension component failed on the car – which very rarely happens to us. I had a failure on the right-front – and I’m just glad I was able to figure it out before I hit the brakes [for Turn 11]. It’s always been a massive strength of our team that components so rarely fail, but today – of all days – something did, which is just unlucky.

“My race was short, but I loved everything else. I was really emotional before I got in the car – it was such a special atmosphere to have the whole team and all my friends and family cheer me on my way into the garage. I’m just glad I was wearing my sunglasses at that moment...

“I’m very content with all I’ve achieved in my career. Now, it’s done. I live in the moment, though, and tonight’s going to be a helluva lot of fun!”

Eric Boullier, racing director
“Fernando drove faultlessly to 10th place today, earning us a single world championship point; but, without wishing to detract from yet another strong drive from him, today was all about Jenson as far as we were concerned.

“I’m sad and sorry that his race ended in suspension failure – but, having said that, the minor placing he thereby lost will mean little to him in what I gather from my British colleagues is called the grand scheme of things.

“His McLaren record speaks for itself: eight Grand Prix wins, some of them utterly superb, and seven great years in which he won the hearts of McLaren’s staff and fans alike. On behalf of us all, JB, I salute you.

“Next year, of course, he’ll still be around, assisting us in many ways, but racing our cars will be Fernando, arguably the greatest racing driver in the world today, and Stoffel [Vandoorne], whose potential is almost limitless. If you regard a balance of proven experience and youthful promise as the optimal blend in a Formula 1 driver line-up, and many people do, then I challenge you to name a better pairing than our 2017 duo.

“As the curtain goes down on 2016, I want to praise Honda for the impressive progress they’ve made during the course of the past season, and I’d like to thank our sponsor-partners also for their crucial ongoing support. Our staff deserve a big collective pat on the back too: in difficult circumstances they’ve played a blinder – as our mechanics tell me a job well done is best described.

“And, last but very far from least, I want to pay tribute to our fans, the best in the world. Your faith and loyalty are a constant inspiration to us, and I thank you for your unstinting devotion to the cause encompassed pithily in the well-worn hashtag #BelieveInMcLarenHonda.

“And finally, may I offer the congratulations of all of us to Nico [Rosberg], who crowned a fine season with world championship glory here in Abu Dhabi this evening. Nico has never driven for McLaren but of course we know him well, having first welcomed him to our paddock motorhome when he was a kid, introduced to us by his famous father Keke, who drove for McLaren 30 years ago. Congrats to them both.”

Yusuke Hasegawa, Honda R&D head of F1 project
“First of all, I would like to thank each and every one of the McLaren-Honda team members for a job well done throughout the long 2016 F1 season. I am very proud of the achievements we have made together, in what has been another challenging year.

“The Abu Dhabi GP was bittersweet in that Jenson had to retire early on, but he drove a good race and fought well for the short time he had on track, which was what he was hoping to do. Fernando drove superbly, showing his fighting spirit to push hard until the chequered flag. It was a difficult race, so I am glad we were able to finish with a championship point, so in that aspect I am happy for the team.

“From tomorrow onwards, we push our development for 2017 to full power, and hope to step up our game over the winter months.

“Last but not least, thank you Jenson for being our friend, colleague and hero driver. It will be very sad not to see you at every race next year, but my bet is that you will miss us too much, and we will see you again very soon!”