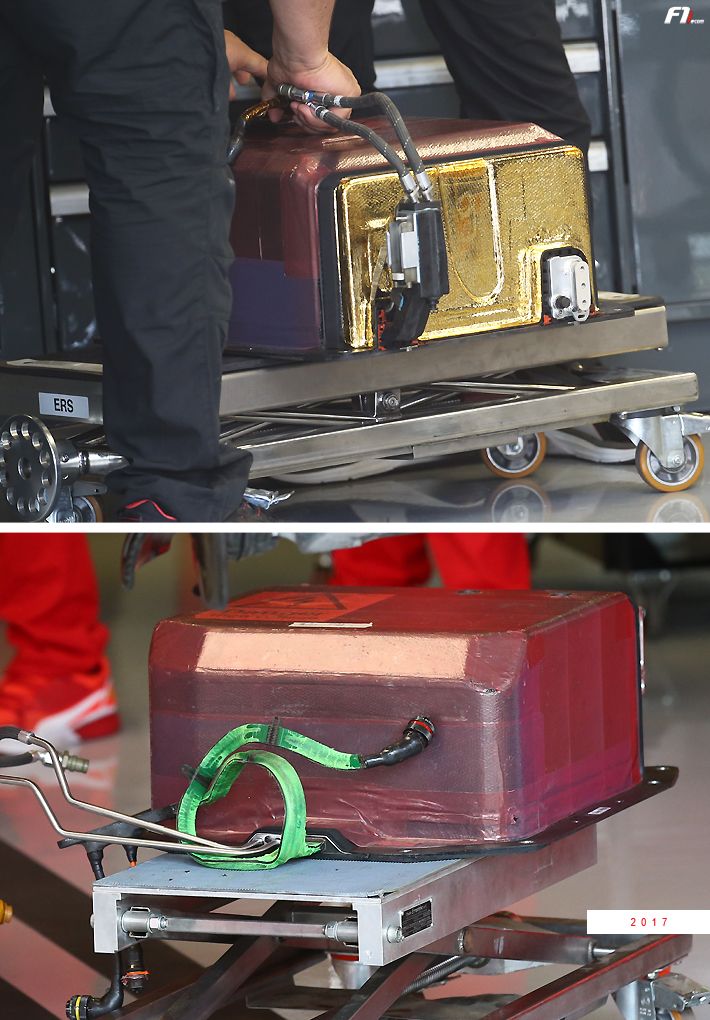 The Canadian Grand Prix was also the opportunity to see the famous battery of the Ferrari powertrain. This element has been closely monitored by the FIA since a possible fraud was reported by a former Maranello engine engineer –­ Lorenzo Sassi ­– who joined Mercedes six months ago.

As is well known, the battery - also known as energy store (ES) - can feed up to 4MJ/lap to the MGU-K, which then transfers a maximum power of 120kW (or 160bhp for some 30 seconds) to the engine (actually the drivetrain).

Mercedes suspects the Scuderia’s battery is delivering more than the 4 MJ allowed. In Monaco, race director Charlie Whiting said that this was not the case after conducting a laborious investigation (started in China) and following long exchanges with the Italian engineers. Ferrari modified their software in Spain to facilitate access to data that the FIA wanted to check (or, according to some, to return to the right path…) In Montreal, Whiting had additional sensors added on the battery to simplify future checks – a sign that perhaps not all doubts have been dispelled.

The difficulties encountered by the FIA during its investigation can be explained by the unusual configuration of the Italian battery. According to Whiting, the other engine manufacturers treat their battery as one whole. At Ferrari, on the contrary, the casing contains two batteries, managed separately. One can imagine (this is a hypothesis) that one of the batteries is linked to the MGU-K and that the other is connected to the MGU-H.

By running the two batteries in parallel, the Scuderia would be able to bypass the limit of 4 MJ per lap. To be sure, the FIA has placed additional sensors on the SF71-H in Montreal to understand “exactly what the differences between the two halves of the battery are”, in the words of Whiting in Monaco. The FIA did not make any further comments on the subject in Canada.