Lewis Hamilton was beaming after securing his easiest win of the 2017 season in Canada this weekend.

"There wasn't really any trouble today. It was a beautiful Sunday drive," he said. "Just feeling relaxed and excited. I'm happy. Super happy!

"It's been an amazing weekend, so I just feel very grateful. The day is done now - I'm probably going to jump in the lake later!"

After a tough time in the last outing in Monaco, he felt that the first Mercedes 1-2 of the season showed that the team was once again back on course. For the first time, their rivals Ferrari weren't able to keep up.

"We've really solidified our strength," he told Sky Sports F1 after the race. "Got a better understanding of the car, and hopefully that we can put it in the same spot in the following races.

"After the last race, we know now where to develop this car moving forward, which is going to make such a difference in winning this championship.

"I think Ferrari had the edge this weekend," he added. "But we gave them a lap yesterday they couldn't answer to, and then today I think they just had a bit of a messier race.

"They're still very, very quick. They've been so consistent all year. This is the only weekend they've had not the greatest result - but they've not a seventh or something like we've had.

After an early setback, Sebastien Vettel clawed back fourth place in Montreal. As a result, Hamilton's victory means that the gap between them in the championship standings has been halved.

"I saw he was in sixth and I was like, 'that's great.' Then he was fifth I was like 'oh, I hope he stays there.' Then he got to fourth I thought 'I hope he doesn't get any higher than that'!

"Our first one-two as the team [in 2017] is a really proud moment for us. Everyone here works so hard, back in the factory - the energy and spirit in this team is at the highest it's ever been."

Ocon: 'I had the pace by far to attack Ricciardo' 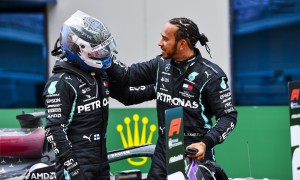 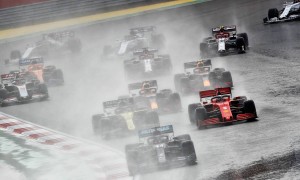