Ferrari's Sebastian Vettel soaked up intense pressure to take a narrow victory in the 2018 Bahrain Grand Prix ahead of Mercedes' Valtteri Bottas.

Lewis Hamilton recovered from a grid penalty to join the pair on the podium. Kimi Raikkonen had been confident of a top four finish when his race ended abruptly with a team mistake during his second pit stop.

Pierre Gasly claimed a brilliant fourth place for Toro Rosso. But it was a disastrous day for the senior Red Bull squad, with both Daniel Ricciardo and Max Verstappen retiring from the race in the opening laps.

With the floodlights blazing overhead, Sebastian Vettel started his 200th Grand Prix with a successful launch from pole position when the race lights went out. He was able to successfully hold on to the lead into the first corner, but his Ferrari team mate Kimi Raikkonen lost out to Valtteri Bottas.

Daniel Ricciardo initially held on to fourth place. However on lap 2 his Red Bull suddenly turned itself off with an electrical failure. He was forced to coast and pull over at the side of the track. It soon turned into a double disaster for the team when Max Verstappen and Lewis Hamilton tangled into turn 1, and the front wing of the Mercedes left the RB14 with a shredded left rear tyre.

Ricciardo was out of the race, but at least the virtual safety car his retirement triggered helped Verstappen limp back to pit lane and rejoin the race on new tyres. However moments later he, too, was ordered to pull over and park by the side of the track, completing an absolute disaster in the desert for Red Bull.

Hamilton, who started from ninth place due to a gearbox penalty, had escaped unscathed from his clash with Verstappen. Despite being on soft tyres while those around him were sporting supersofts, he was soon on the march. He quickly passed Fernando Alonso, Nico Hulkenberg and Esteban Ocon in one move, and on lap 6 also got the jump on Kevin Magnussen's Haas for fifth. Two laps later, Toro Rosso's Pierre Gasly gave way with good grace and yielded fourth place to Hamilton. 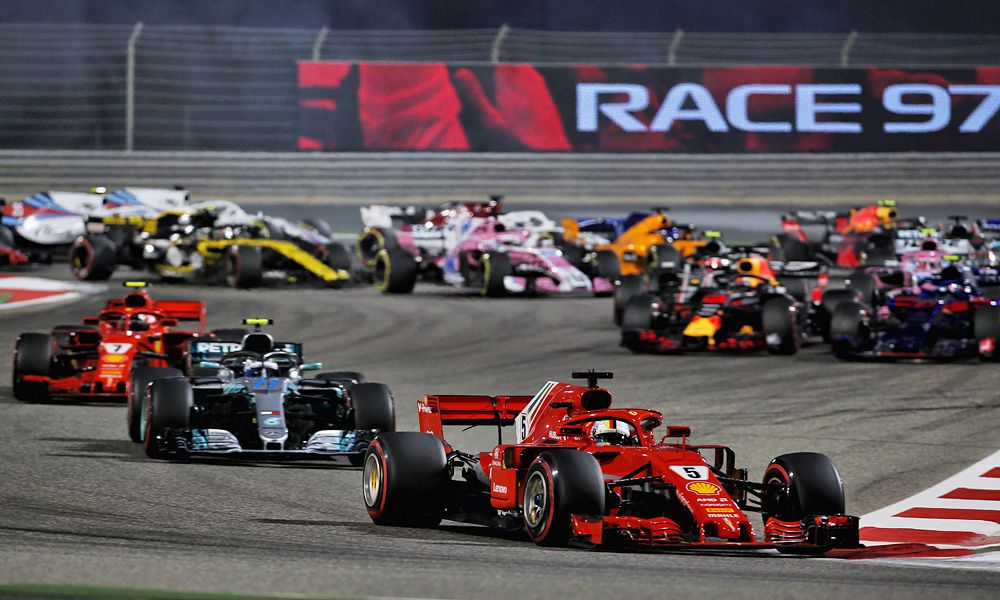 By this point Vettel had a three second lead over Bottas, who had a similar margin over Raikkonen in turn. Hamilton was a further nine seconds in arrears but was pulling rapidly away from Gasly.

While the leaders stayed out, the drivers behind were starting to make a move to pit lane. Lance Stroll was one of the first in on lap 11 in order to replace a damaged front wing on the Williams; Magnussen made a scheduled call for new tyres on lap 13 and Alonso responded two laps later. That triggered Gasly, Hulkenberg and Ocon to come in next time by.

Vettel was next to blink at the end of lap 18, surrendering the lead to Bottas. When he came back out, he slotted back in behind the Mercedes having changed to soft tyres. Raikkonen came in on the next lap, and Bottas held on for one more lap before following suit.

Crucially, Mercedes had fitted their man with medium tyres with an eye to running him to the end of the race without a further stop. Now in the lead but yet to pit, Hamilton was similarly eyeing a one-stop strategy.

Behind the top four, Gasly was continuing to be the shining star of the desert night in fifth. That put him ahead of Magnussen, Hulkenberg, and Alonso and his McLaren team mate Stoffel Vandoorne.

Ocon rounded out the top ten just ahead of his Force India team Sergio Perez, who had lost time after being tipped into a spin by Brendon Hartley on the opening lap. The Kiwi had been handed a ten second penalty by the race stewards for causing a collision and now found himself circulating in 16th place ahead of the two Williams of Stroll and Sergey Sirotkin.

A massive cheer went up in the grandstands when Vettel used his fresher tyres to catch and blast past Hamilton for the lead on lap 26. Mercedes used that as the trigger to call in Hamilton for his single stop and switch to medium tyres, rejoining in fourth place behind Raikkonen. Now it all depended on whether the two Ferraris could pull out sufficient gaps to fit in their remaining single pit stop apiece without losing positions to the Silver Arrows.

Haas had already initiated its second round of pit stops, briefly dropping Magnussen out of the top ten on lap 28. However the Dane was able to make quick passes on both Force Indias, which were looking oddly sluggish. He was back in the points even before Hulkenberg and Alonso made their own second stops. 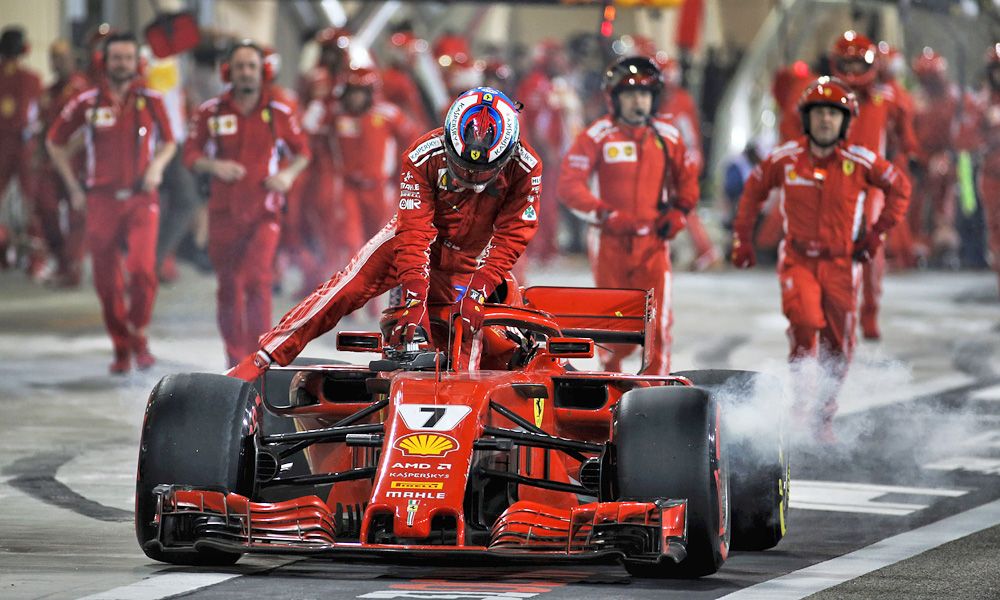 Ferrari triggered its own response by calling Raikkonen in on lap 36 - but it went horribly wrong. Not only was the left rear tyre not changed by the time the SF71H was ushered away, the confusion led to a mechanic being hit as the car pulled away. Raikkonen was ordered to stop immediately. Medical teams rushed to the Ferrari pit stall to attend the stricken crew member, who was subsequently taken to a local hospital for evaluation and treatment.

The team's hopes now rested with Vettel. Both Mercedes were now gradually whittling away the gap to the race leader, but Hamilton was audibly fretting over the team radio about what he needed to do to gain the upper hand. The events of Melbourne's strategy mistake were clearly still very much on his mind during a series of increasingly testy and garbled communications with the pit wall.

Amidst the turmoil, Ferrari had been forced to switch Vettel to a one stop strategy - even if that meant a risky 39-lap stint on the soft compound. Bottas drew within six seconds of the Ferrari, while a frustrated Hamilton professed himself bewildered by what was required of him 12s further back in third place.

After that it became a race against time for the leaders. Vettel was visibly slower, and Bottas eventually succeeded in getting within DRS range. However, he ran out of laps before he could capitalise on the situation. The wily Vettel retained track position and crossed the line in front to clinch his second victory of the season.

Hamilton was six seconds behind the pair. He was followed by Gasly in a magnificent fourth place for Toro Rosso and its jubilant engine partners Honda. Magnussen, Hulkenberg, Alonso and Vandoorne were next to take the chequered flag, with Marcus Ericsson finally scoring points for Sauber in ninth ahead of Ocon.