Red Bull put their recent troubles behind them, with Daniel Ricciardo clinching a stunning surprise victory in the Chinese Grand Prix. It's the Australian's sixth career win.

A mid-race safety car had given Ricciardo the opportunity to take on fresh tyres at a crucial moment. It allowed him to overtake his way to the lead ahead of Mercedes' Valtteri Bottas and Ferrari's Kimi Raikkonen.

An out-of-sorts Lewis Hamilton struggled his way to fourth place. However he still finished ahead of his title rival, after Sebastian Vettel was involved in a collision with Max Verstappen which meant he finished in eighth place.

The sun had finally decided to make an appearance in Shanghai, instantly raising the track temperatures. Ferrari and Mercedes had planned for this with their strategy of starting the race on soft tyres, while the rest of the top ten would have to manage on the faster but shorter-lived ultrasofts.

When the lights went out, a clean start saw polesitter Sebastian Vettel move across to stop his Ferrari team mate Kimi Raikkonen from stealing a march down the inside. It worked, and Vettel retained the lead into the first corner. However Raikkonen - and Lewis Hamilton behind him - both lost momentum as a consequence.

That allowed Valtteri Bottas to swoop in and claim second place, with Max Verstappen following him through for third. Behind them, Daniel Ricciardo held on to sixth place ahead of the sparring Renaults of Nico Hulkenberg and Carlos Sainz, with a similar duel between Haas drivers Kevin Magnussen and Romain Grosjean rounding out the top ten. The Frenchman soon had Fernando Alonso nipping at his wing mirrors in the McLaren. 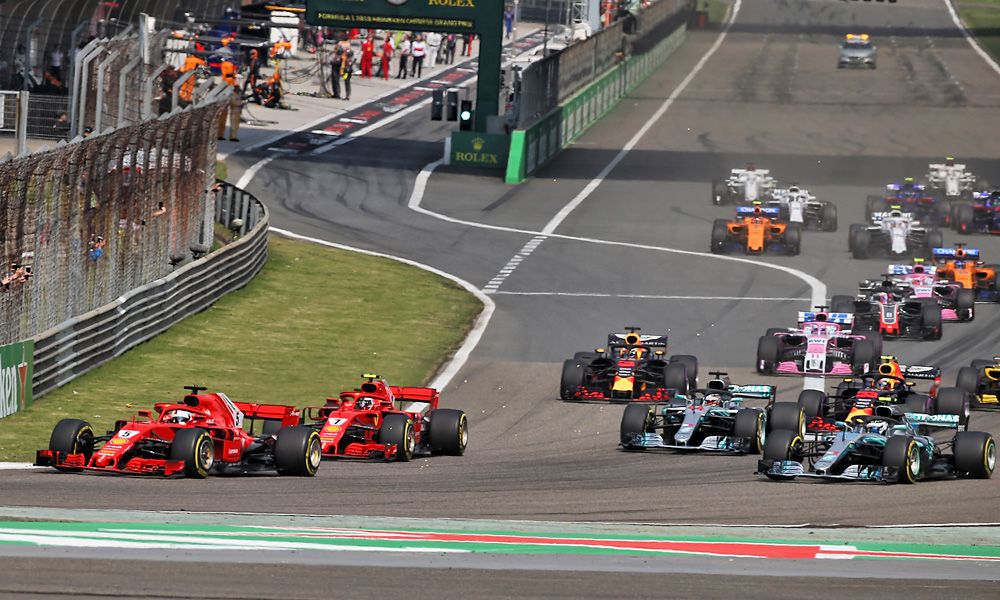 Vettel soon got down to work and quickly ensured Bottas was out of DRS range. Verstappen was also in consolidation mode, having been warned by the Red Bull pit wall not to get too greedy after his flying start.

Toro Rosso's Brendon Hartley was the first man to abandon the ultrasofts on lap 11, switching to the mediums. Sainz and Hulkenberg soon followed suit. Force India responded by calling in Esteban Ocon and Sergio Perez, but in their case the call was to run the next stint on softs. Although this dropped them to the back of the field, their fresh rubber soon had them picking off backmarkers to regain lost ground.

Red Bull made their ultrasofts last 18 laps, at which point the team called in both Verstappen and Ricciardo at the same time for a synchronised switch to mediums. Mercedes immediately responded by bringing Hamilton in next time by, and Bottas on lap 20.

Ferrari initially held their nerve, only belatedly realising the significant danger of the undercut. When Vettel pitted on lap 21, it was already too late. He lost position to Bottas as he exited pit lane, after an understandably tentative pit stop following last week's disaster.

Having failed with Vettel, Ferrari had to decide what to do with Raikkonen's pit stop strategy. Although the Finn was currently leading the race, a pit stop now would drop him back to sixth place. All they could do was keep him out and hope for something to happen - and effectively use him to back Bottas into the clutches of Vettel.

By lap 27, the strategy had put the top three within a few tenths of each other on track. However, by now Raikkonen's tyres were shot and he was finally picked off by Bottas, with Vettel following him through. Raikkonen - his race seemingly now sacrificed to team strategy - immediately dived into the pits, coming back out behind Ricciardo. Meanwhile Vettel was doing everything he could to find his way around the Mercedes, but Bottas was proving steadfast in the lead.

After the heights of Pierre Gasly's success in Bahrain, Shanghai proved a day to forget for both him and Toro Rosso. Gasly made an ill-advised lunge down the inside of his team mate into the hairpin on lap 31, the collision spinning Brendon Hartley around. Despite damage, both cars were able to continue after being checked over and patched up on pit lane. However Gasly was handed a 10 second penalty for causing the accident.

The bodywork debris left on track by clashing Toro Rossos triggered a safety car. It was perfect timing for Red Bull, who immediately responded by double stacking their drivers for a second time. Renault responded similarly. But it was not so opportune for the rest of the leaders, with Bottas, Vettel, Hamilton and Raikkonen all staying out.

When the race resumed, Ricciardo made quick work of passing Raikkonen for fifth place on lap 38. Verstappen also tried leaning on Hamilton, only to be pressured wide in turn 8 which allowed Ricciardo to make up another spot at his team mate's expense. This actually proved bad news for Hamilton as well, with Ricciardo once again proving himself Formula 1's modern king of late-braking overtaking into the hairpin on lap 41 to wrest third from the Mercedes. 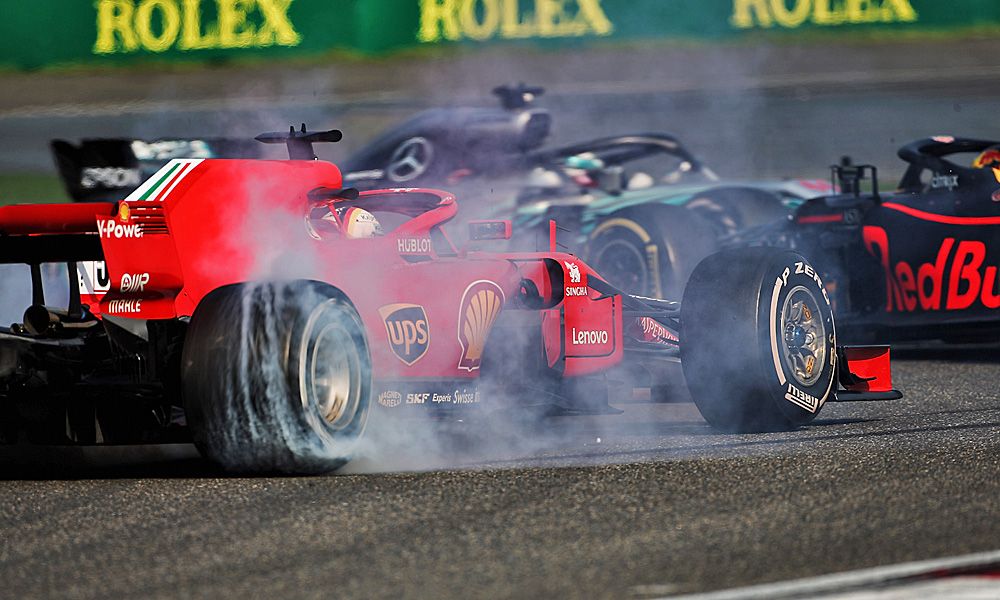 Moments later Ricciardo had an even easier time flying past Vettel for second, while Hamilton's depression deepened further when Verstappen similarly got the jump on him for fourth place. Raikkonen was next to line the Mercedes up for a pass, when ahead of them there was a clash between Vettel and Verstappen that left both cars spinning at the hairpin. Hamilton avoided running into the stationary pair, but lost the place to Raikkonen in the process.

Verstappen and Vettel both got going again. However Vettel lost a further place to Hulkenberg as he recovered, and race stewards handed Verstappen a ten second time penalty for causing the collision. Meanwhile, it was with a sense of triumphant inevitability that Ricciardo completed another swashbuckling pass on Bottas to take control of the race on lap 46.

Like his team mate before him, Verstappen was able to pass Hamilton on track. However he was labouring under the penalty which meant he was still classified in fifth place. Hulkenberg was secure in sixth ahead of Vettel, who eventually succumbed to a move from Alonso in the closing laps. That dropped him to eighth place ahead of Sainz and Magnussen.

The Force India cars of Ocon and Perez once again hovered just outside the points, with Stoffel Vandoorne finishing ahead of the two Williams cars of Lance Stroll and Sergey Sirotkin. Marcus Ericsson finished the race in 16th, three places ahead of his Sauber team mate Charles Leclerc who had suffered a brief off-track excursion into the gravel on lap 29.

Gasly limped home in 18th in his wounded Toro Rosso, with Hartley classified as the sole DNF of the day. Having run in the top ten early in the race, Romain Grosjean fell to 17th for Haas by the chequered flag. 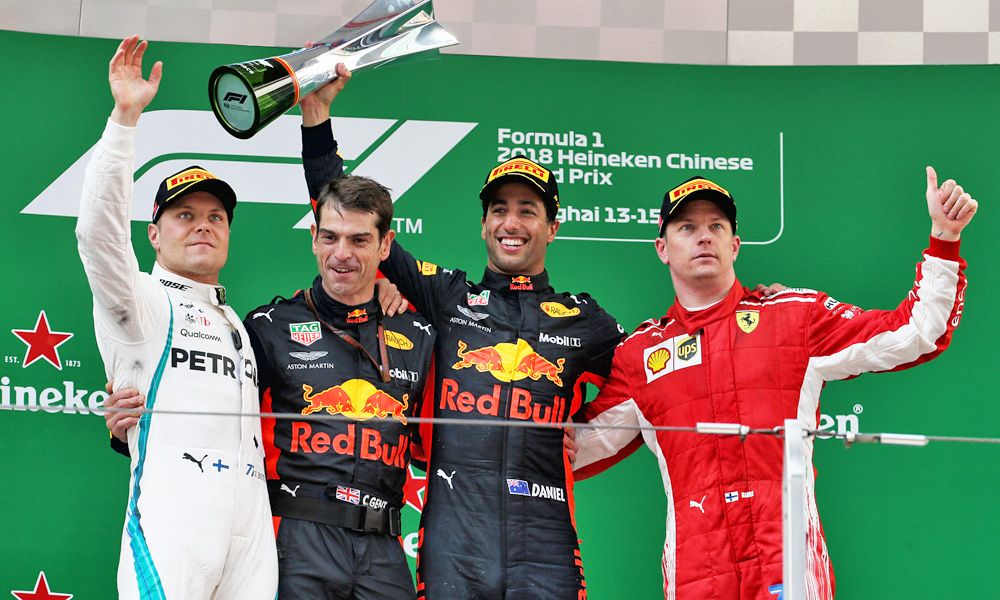 Magnussen has stability at Haas, and hopes to keep it for 2019

Verstappen owns up to China GP foul-up with Vettel