Lewis Hamilton claimed the first win of 2018 for Mercedes after emerging victorious in another highly eventful Azerbaijan Grand Prix on Sunday in Baku.

Ferrari's Kimi Raikkonen recovered from a first-lap crash to take second place ahead of Force India's Sergio Perez. Sebastian Vettel had led for the first half of the race, but ended up in fourth after running off in a late restart.

Valtteri Bottas had looked set to clinch victory before suffering a puncture from a piece of debris on the track. And both Red Bulls failed to finish after Max Verstappen and Daniel Ricciardo wiped each other out on lap 41.

The gusting winds that had strengthened considerably overnight had already made a firm impression on the drivers. Several cars had even found themselves blown off course on their way to the grid for pre-race formalities. It was therefore with some relief that all 20 made it to the grid in time for lights out and the start of the race.

Polesitter Sebastian Vettel got off to a good start and kept the lead from the two Mercedes cars of Lewis Hamilton and Valtteri Bottas. Also successfully maintaining position were the Red Bulls of Daniel Ricciardo and Max Verstappen.

However, Kimi Raikkonen was immediately under attack from Esteban Ocon. The Force India got in front going into turn 2 and turned in across the Ferrari, but there wasn't enough room. Ocon was punted hard into the barrier, showering the track with debris. As the pursuing cars packed together there was a follow-up collision between Sergey Sirotkin and Fernando Alonso, which put the Williams out of the race and the McLaren limping back to pit lane with a puncture and suspected floor damage. 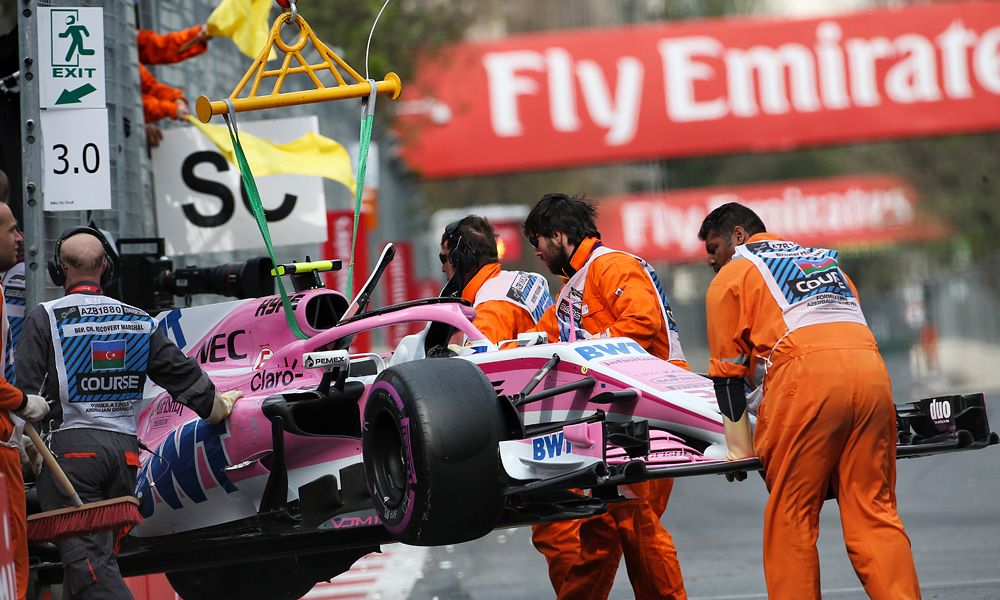 Ocon's team mate Sergio Perez had also sustained minor damage from contact with Lance Stroll. He pitted for repairs under the inevitable safety car which had been deployed to allow marshalls to clean the debris from the track. Sauber's Marcus Ericsson also came in for a new set of soft tyres before the restart on lap 6.

Vettel backed up the field and held off getting on the throttle until the last minute, practically daring Hamilton to drive into him. In the end it was a clear restart, but not a good one for Ricciardo who lost two spots in quick succession - first to his team mate Verstappen, and then another to Renault's Carlos Sainz.

Sainz had started the race on ultrasoft tyres, giving him an advantage on the supersoft-shod Verstappen. After a thrilling back-and-forth battle over multiple laps, Sainz was finally able to blast his way past on lap 9. There was a similar tyre imbalance between Stroll and Nico Hulkenberg and Pierre Gasly; the Williams swiftly lost out to both.

Hulkenberg then made his way past Ricciardo for fifth place, but the success was short-lived. Two laps later and the rear of the Renault slid into the wall at turn 4, leaving the R.S.18 with a puncture that forced him into retirement.

That put the Red Bulls together on track, and there were no team orders as the pair tussled for position. Verstappen marginally held the upper hand, ruthlessly fending off any moves from Ricciardo to get past. Both appeared to be struggling with battery recharging issues leaving them frustrated despite placatory reassurances from the pit wall.

Another unhappy driver was Raikkonen, who was complaining about late DRS activation in turns 2 and 3. Race control soon confirmed that the detection point had malfunctioned for everyone and that manual operation was now permitted. The workaround didn't seem a significant problem for the Finn when he used DRS to pass Stroll for eighth place. His next victim was Charles Leclerc, who had been driving out of his racing socks in the Sauber.

By comparison, Leclerc's team mate Marcus Ericsson was running at the back after locking up and running off at turn 3 on lap 18. It forced him to make a pit stop for change his flat-spotted tyres, and to add insult to injury the Swede was handed a ten-second penalty for causing a collision with Haas' Kevin Magnussen at the start.

Sainz's ultras had reached end-of-life status after 15 laps, forcing him to pit from fourth place for a set of softs. He returned to the track in 13th place, promoting Verstappen to fourth - albeit 20 seconds behind the top three. Gasly also pitted, while Stoffel Vandoorne had been forced into an earlier stop than planned by McLaren after flat-spotting his first set of tyres. 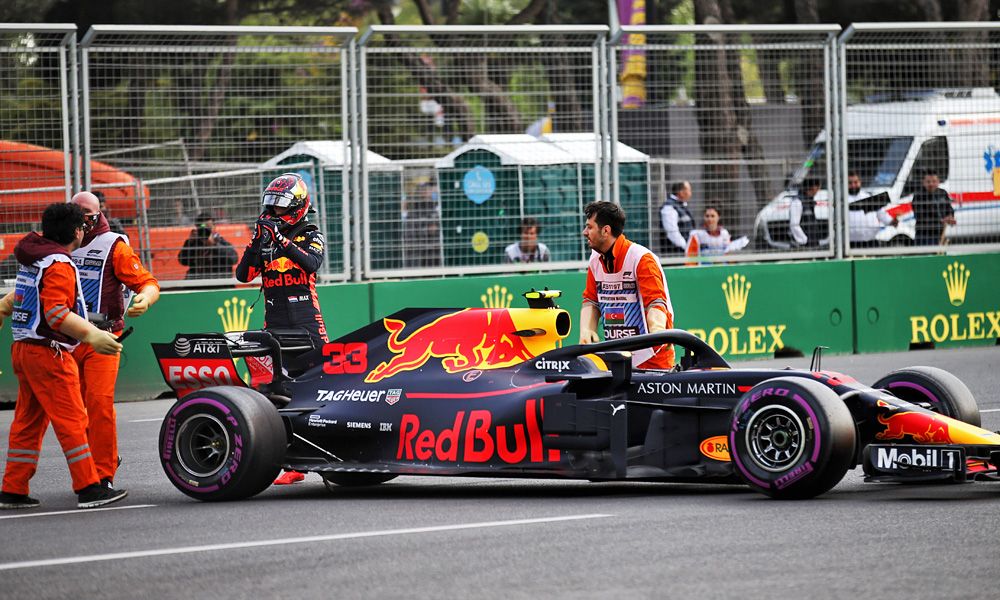 In similar fashion, Hamilton also suffered a major lock-up into turn 1 at the start of lap 22. "Something's happened, I don't know what," he told his race engineer. "These tyres are done." Mercedes responded immediately by pitting him next time by for soft tyres, earlier than the team had been hoping. He narrowly held on to third place ahead of the Red Bulls, while Vettel and Bottas continued to circulate at the front.

Despite running on fresher tyres, Hamilton made up little time on the frontrunners. Vettel finally pulled the pin to make his own stop on lap 31, but there was no response from Bottas who moved into the lead. Red Bull also held fire, with Ricciardo finally forcing his way past Verstappen for fourth place going into turn 1 on lap 35.

Three laps later, Red Bull finally showed their hand and called Ricciardo. With just 13 laps remaining, the plan was to finish the race with a burst of speed on the ultrasoft tyres. However a poor out-lap left Ricciardo vulnerable, and sure enough Verstappen's stop next time by saw him emerge from pit lane back in front of the Aussie.

This did not go down well with Ricciardo who threw everything possible into overtaking the younger man. Disaster loomed - and then materialised down the main straight. Verstappen refusal to yield position met with Ricciardo's superior speed into turn 1, and the pair ran into each other. Two RB14s slid into the run-off, their race done: back on the pit wall, technical chief Adrian Newey picked up his notes and stormed away to the depths of the garage.

The ensuring safety car allowed Bottas to make his own stop for ultrasofts. With nothing to lose, Vettel and Hamilton followed suit before the restart, which was significantly delayed by a curious accident in which Romain Grosjean's Haas suddenly speared into the wall while warming its tyres.

Once the safety car came in, the Grand Prix concluded with a four lap sprint race to the chequered flag. Bottas controlled the restart well, but Vettel attempted a run down the inside only to lock up and take to the run-off area. Raikkonen and Perez were able to pass for position while he struggled to recover. 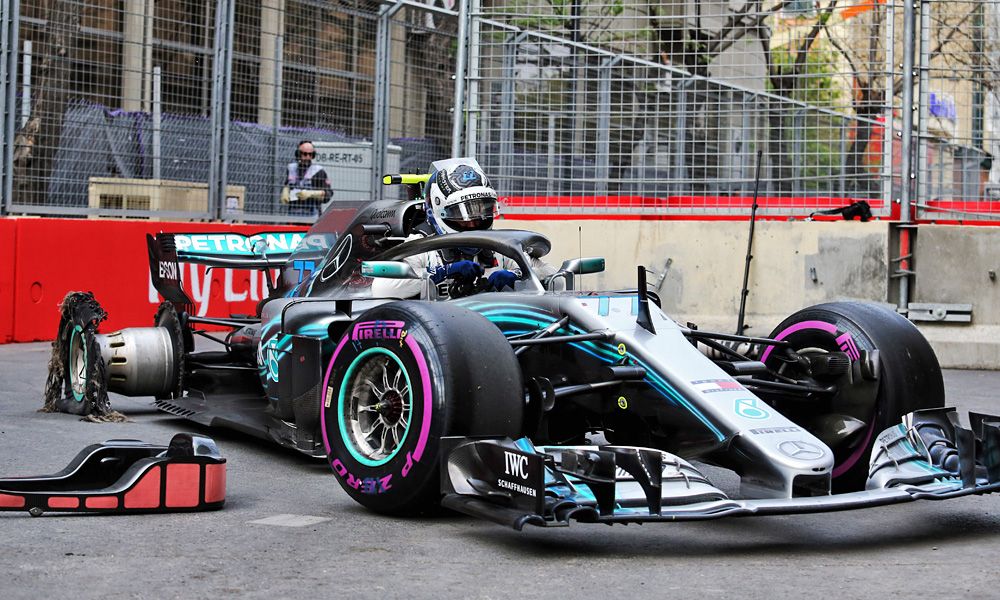 It looked like Bottas was set for victory, but he suffered a sudden right rear puncture after running over a piece of debris, which left him pulling over to the side of the track. Hamilton inherited the lead with Raikkonen finding himself unexpectedly in second place ahead of Perez, who had served a five second penalty for jumping the restart after the first safety car.

Vettel had to make do with fourth ahead of Sainz, with Leclerc clinching a hugely impressive sixth ahead of Alonso, Stroll, Vandoorne and Hartley. Ericsson just missed out on points in 11th ahead of Gasly and Magnussen.

Ocon lashes out at Raikkonen for opening lap clash!

Verstappen: 'Racing was fair with Daniel but crash was unnecessary'