Sergio Perez said that the final laps of the 2018 Azerbaijan Grand Prix ranked as the best of his entire Formula 1 career.

The Force India driver got the opportunity to pass Ferrari's Sebastian Vettel for a podium place at the final restart. But he was on supersoft tyres while everyone else around him was on the faster ultrasoft compound. It meant he had the fight of his life on his hands.

"It was such a roller coaster," he said after the race. "We had everything out there. A really difficult run, damage front win so we had to box. Then we had the penalty we had to serve.

"But where I found my race really interesting was at the end of the race, at the restart. I was on the supersoft tyres and everyone else was on the ultra. It wasn't that the team got it wrong or something, it was the only compound we had.

"Warming them up was extremely difficult," he explained. "I was happy to keep my pace there at the restart. But then I saw that everyone else ahead of me was struggling even more. Sebastian had a little flat spot, so I saw an opportunity and went for it.

"[After that] I had to keep a very strong rhythm, trying to keep close to Raikkonen to make sure that Sebastian didn't get close enough.

"But then the last two laps, when Sebastian recovered, were unbelievable. I was on the supersoft tyres and I did the two laps on the end - I think the two best laps of my career."

Perez had to visit the race stewards after the race for a possible DRS infringement during the race that could threaten his podium place. But assuming he retains it, it will be his eighth podium in Formula 1. That's more than any other Force India or Mexican driver in the sport's history.

"It means a lot, personally," he told Sky Sports F1 after the race. "And for the history of Mexico - now I get to be the most successful Mexican driver in Formula 1 so that means a lot to me. Also for my family, my country, and for my team as well.

"It's been hard. Up to now we only had one point in the pocket. This podium definitely gives us a lot of boost. Although we won't be fighting in the next races for podiums, we're going to be quite strong in the mid-field group and getting closer."

"It means a huge amount. It's been a tough old start to the season," agreed deputy team principal Bob Fernley.

"I thought after the first lap we were in trouble again," he added, after both drivers were involved in first lap incidents. 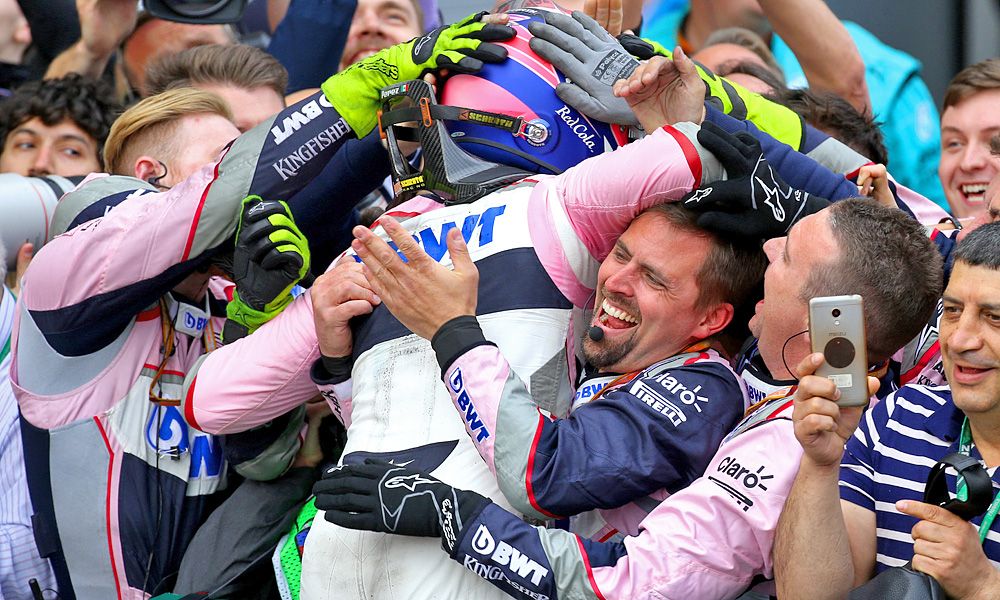 "We just moved it through nicely, positioned him nicely. And then the safety car worked for us quite well. So, everything perfect.

"I think this track suits us. And it probably to a certain degree being realistic papers over a few cracks that we still have," he added.

"We've still got a bit of work to do. But not to take anything away, that was an incredible team effort.

"Back to basics tomorrow," he said. "Get ourselves ready for Barcelona. We've still got some work to do to get us onto those aero circuits.

"But battle on, and that fourth place [in the constructors championship] is still going to be ours.