Red Bull continued to prove itself the master of the tight and twisty Monaco street circuit, with Daniel Ricciardo and Max Verstappen staying fastest in second practice on Thursday afternoon.

Having topped the times earlier in the day, Ricciardo was once again unbeatable after lunch with a time of 1:11.841s. That put him 0.194s ahead of his team mate, with Ferrari's Sebastian Vettel almost four tenths further back.

The session saw no significant incidents, although 15 minutes were lost while track workers welded down two errant drain covers under a red flag.

When the iconic street track opened for business after lunch, Sauber's Charles Leclerc opened proceedings with a time of 1:15.795s. That put him ahead of the two Haas cars, with both Romain Grosjean and Kevin Magnussen out early to make up for time lost in FP1.

Sebastian Vettel soon improved on that, and the Ferrari was swiftly demoted from the top spot by a flier from Toro Rosso's Brendon Hartley which clocked in at 1:13.709s.

Vettel didn't think much of that. He was soon back out in front by the time that the Mercedes garage stirred into life and ushered Lewis Hamilton and Valtteri Bottas into action.

However the session was interrupted by a red flag 25 minutes in, when two drain covers came lose on the exit of Casino Square between turns 4 and 5. Repairs took a little over 15 minutes - with the clock continuing to count down - before cars were allowed back out.

Before the red flag, Max Verstappen had been fastest with a time of 1:12.071s, putting the hypersoft-shod Red Bull over a second clear of Vettel. Daniel Ricciardo had been the last of the drivers to come out for a flying lap, duly jumping up to third ahead of Bottas and Hartley before the stoppage.

Hartley pushed hard at the restart but connected with the outside barrier at turn 1 with his left-front wheel. Kimi Raikkonen's run was more successful, putting him him to second place on hypersoft tyres half a second behind Verstappen. However, the Finn was unhappy with Sergey Sirotkin getting under his feet in the Williams.

Verstappen pulled off a small improvement on his run before making light contact with Grosjean at the hairpin in what appeared to be a general misunderstanding. Meanwhile other drivers were closing the gap to the Dutchman: eventually it was his own team mate who deposed him from the top of the time sheets, Ricciardo almost two tenths faster to dip into the 1:11s.

After that, attention turned away from qualifying laps to focus on race simulations and checking on tyre durations. In the process, Hartley demonstrated tha the STR13 was able to run 25 laps on the 'short-lived' hypersofts. On the other hand, Hamilton's trial of the supersofts proved to be less successful as he reported that "it just feels unsafe on this tyre, man."

The lack of any faster times meant Vettel held on to third place, with Hamilton having popped into fourth place on the timesheets ahead of Raikkonen and Bottas. Renault's Nico Hulkenberg ended up as the best of the rest in seventh ahead of the two McLarens of Stoffel Vandoorne and Fernando Alonso.

Rounding out the top ten when the chequered flag came out was Carlos Sainz in the second R.S.18, the Spaniard having also clipped the wall at Tabac late in the session. 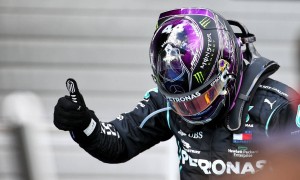 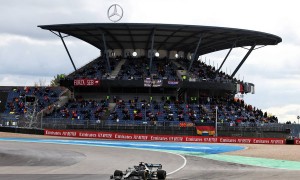