Verstappen set the best time of the day with a lap of 1:12.198s on hypersofts, over a tenth ahead of Ferrari's Kimi Raikkonen. Daniel Ricciardo put in a late flier to go third on the timing screens after the team tackled an engine issue on the RB14.

Lewis Hamilton was some way back in fourth as Mercedes continued to eschew the pink compound. Sebastian Vettel lost time with a lengthy set-up change and was only fifth fastest.

Renault's Carlos Sainz triggered the second red-flag of the day when he spun into the wall at turn 7. Stoffel Vandoorne also made contact with the barriers, resulting in a premature end to the session for the McLaren driver.

With the sunshine beating down on the Circuit Gilles Villeneuve from a clear blue sky, air and track temperatures had significantly picked up over the lunch break.

Kimi Raikkonen was the first to go out, eventually posting a time of 1:14.382s before Mercedes belatedly joined the fray and Lewis Hamilton set a new top time of 1:13.031s on supersofts. Valtteri Bottas went second quickest albeit half a second off his team mate, with Red Bull's Max Verstappen soon slipping into third place ahead of Raikkonen, Renault's Carlos Sainz and McLaren's Fernando Alonso.

However Verstappen's team mate Daniel Ricciardo was struggling to keep up with the pace and retreated to the garage where engineers worked on the back of his RB14. "The engine wasn't running cleanly in the first session and it hasn't cleaned up," reported team boss Christian Horner.

Meanwhile Nico Hulkenberg had finally emerged on track after Renault finished repairs following his gearbox issues in FP1 to set his first proper lap time of the day, albeit some three seconds off Hamilton's pace. That left Sebastian Vettel as the only driver yet to make an appearance in the first half hour as Ferrari worked on a lengthy set-up change on the SFH71.

Before Vettel could get out, the session was red-flagged. Sainz had lost the back-end of the R.S.18 through the turn 7/8 chicane, and the left-rear thumped the concrete barrier. Sainz was left to radio the pit wall with the bad news: "I touched the wall. I'm going to try to make it back, but there's damage."

Once the debris was cleared up, Vettel finally joined the rest of the field on track and was soon up to fourth place. Most drivers had used the stoppage to switch to hypersoft tyres, and Raikkonen duly went top with a time of 1:12.328s. That was half a second faster than Hamilton, although the Briton remained on the slower ultras. 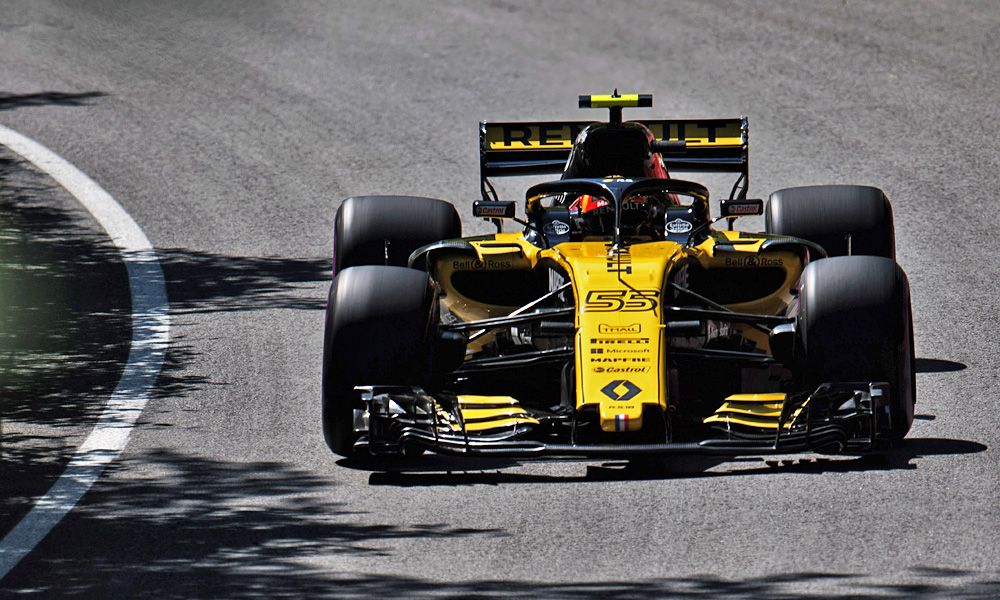 Verstappen found still more time to take away the top honours from Raikkonen before attention turned to race pace simulations. Ricciardo managed to return to the track before the end of the session after his engine issues, and after initial frustration with traffic managed to put in a time good enough for third on the timing screens.

That left Hamilton demoted to fourth ahead of Vettel, Bottas, Haas' Romain Grosjean and Force India duo Esteban Ocon and Sergio Perez. Rounding out the top ten was Alonso.

Just as he had in the morning session, Williams' Lance Stroll continued to flirt with disaster throughout the session; however, unlike FP1 he kept it off the wall. Even so, his engineer sounded anxious: "Last corner you were still too quick on entry. You are carrying too much speed and you nearly crashed again."

A number of drivers including Sauber team mates Charles Leclerc and Marcus Ericsson, Haas' Kevin Magnussen and Toro Rosso's Brendon Hartley overshot turn 1 and took to the run-off during the 90-minute session.

Stoffel Vandoorne triggered a Virtual Safety Car when his McLaren drifted into a sparky impact with the wall on the exit of turn 9; it caused significant damage to the MCL33's suspension. He was obliged to pull over and park on the grass verge to await the marshalls, his day done.