Sebastian Vettel will start the 2018 German Grand Prix from pole position after setting a new track record time of 1:11.212s at the Hockenheimring. It's Vettel's 55th career pole, but only the second time the Ferrari driver has claimed the top spot in his home race.

Valtteri Bottas will start alongside him on the front row. However his Mercedes team mate Lewis Hamilton suffered a hydraulic failure at the end of Q1 and was able to take no further part in qualifying, meaning he will start from no better than 14th place on Sunday.

That helped Kimi Raikkonen to claim third place on the grid alongside Red Bull's Max Verstappen, whose own team mate Daniel Ricciardo will start from the back of the grid because of power unit penalties.

After a wet final practice earlier in the day, the rain had stopped and the track was rapidly drying by the time that the drivers headed out on track for the start of qualifying. However the cool and humid conditions came with a threat of further showers and possibly even thunderstorms, which was keeping everyone on their toes as the session got underway

Williams' Sergey Sirotkin was first out on track and straight on to the ultrasoft compound to set a time of 1:15.771s. That was quickly bettered by morning pace setter Charles Leclerc, the Sauber going half a second quicker.

Romain Grosjean confirmed Haas' impressive Friday practice pace by slashing the target time to 1:13.959s. Nico Hulkenberg briefly put Renault at the front before Leclerc's latest run returned him to the top of the pile with a 1:13.562s.

The top teams now deemed the track to be offering a sufficiently dry line, and Ferrari duly sent out their drivers to take charge of the session. Sebastian Vettel's 1:12.538s was narrowly ahead of his team mate Kimi Raikkonen, but the Finn responded and found the extra time he needed to go top by three hundredths of a second.

The Silver Arrows also opened their account, with Valtteri Bottas finding a slight edge on a somewhat ragged Lewis Hamilton to take up residence in third place. Hamilton was subsequently demoted to fifth by a new fast lap from Grosjean.

Last to set times were the Red Bulls. Having been fastest on Friday, Max Verstappen's first effort was ultimately only enough for eighth place, with Daniel Ricciardo behind him in ninth. However the Australian's motivation for the session was admittedly not high, as grid penalties mean he will start Sunday's race from the back row regardless.

Stoffel Vandoorne's miserable weekend continued with more shifting issues for the MCL33. He was then ordered to help McLaren team mate Fernando Alonso out with a tow, and when the chequered flag it was no surprise that he was at the bottom of the timesheets and duly eliminated from the rest of qualifying. Also not making it through to the second round were Force India's Esteban Ocon, Toro Rosso pair Pierre Gasly and Brandon Hartley, and Williams' Lance Stroll.

But the real shock came as the chequered flag came out, with Hamilton going off the track and bouncing heavily over the kerbing at turn 1. Immediately afterwards he informed the Mercedes pit wall that his "gears won't change", and the team confirmed it was a hydraulic problem. He was ordered to immediately stop the car rather than risk damage to the power unit. Hamilton climbed out and tried to push the stricken W09 back toward the pit entrance, but without success. 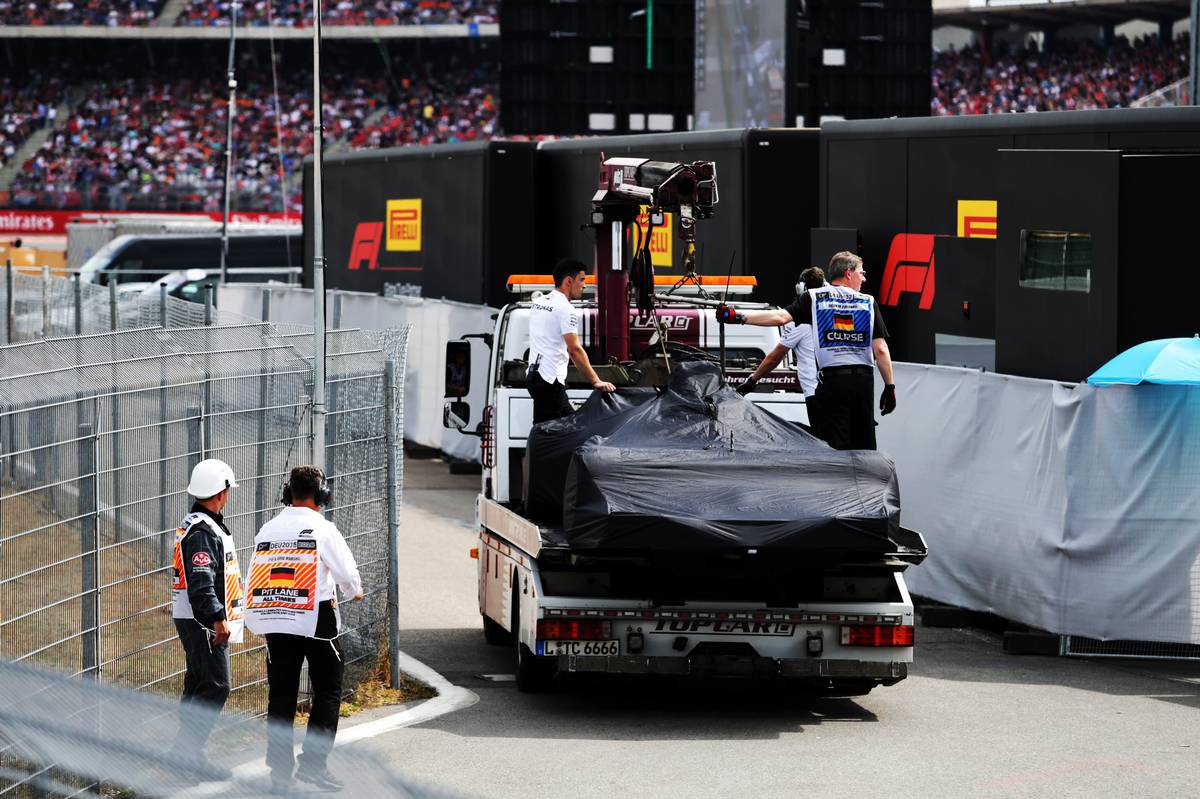 Q2: Bottas fastest in red-flagged round

Grosjean was immediately out on track at the start of Q2, setting the initial benchmark of 1:12.722s. That was soon bettered by his team mate Kevin Magnussen, and then by Bottas who was able to set the latest track record time of 1:12.152s in the remaining Mercedes.

Leclerc had just gone fourth fastest when his team mate Marcus Ericsson went off in the stadium section at turn 13. He was able to keep the engine going and picked his way back to the track, but scattered gravel onto the racing line as he did so.

Raikkonen and Vettel were able to complete their flying laps to go second and third fastest respectively before the session was red flagged to allow marshalls to clean up the track. It came at a bad time for Verstappen, who was on a flying lap on soft tyres at the time.

There was just under seven minutes remaining on the clock when the session eventually resumed. The top six felt secure enough to stay in the garagem but Verstappen was straight back out. The interruption had forced the team send him out on ultras to ensure his progression to the final round, which he did by setting the second-fastest time just 0.036s behind Bottas.

Carlos Sainz also had to dig deep to find the speed to go eighth, which was immediately bettered by Leclerc's final run. Perez also managed to make it through to Q3 when Alonso's final effort came up short, leaving the McLaren in 11th place and out of qualifying.

With Hamilton already out of the session, and Ricciardo opting not to run in Q2 given his inevitable back row start, the other two drivers eliminated at the end of the second round were Sirotkin and Ericsson. 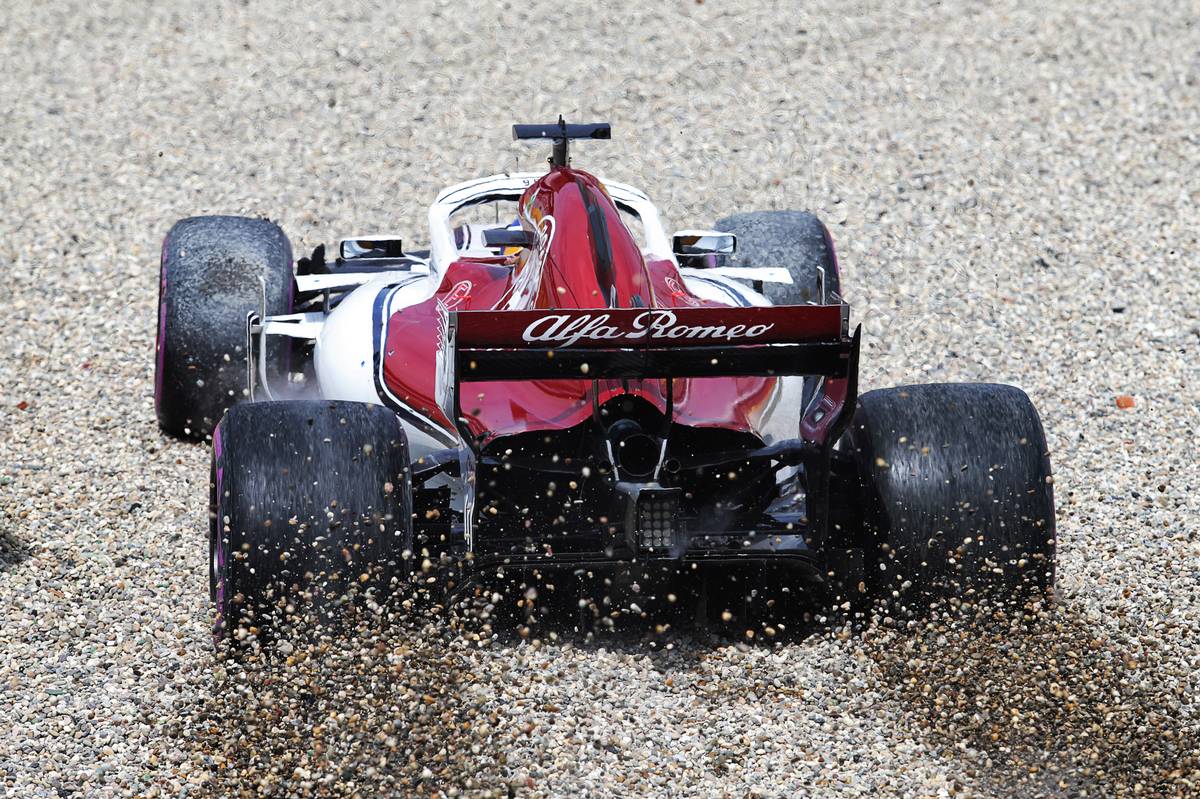 Q3: Vettel stays ahead of Bottas to clinch home pole

Dark clouds were looming over Hockemheim as the final round began, but fortunately the rain held off long enough for qualifying to be completed without interruption.

Raikkonen was first to complete a flying lap, but his effort was immediately bettered by first Bottas and then by Vettel, all three of them posting times under 1:12s. for the first time.

Verstappen couldn't match that pace and was only fourth fastest, with Grosjean best of the rest ahead of Hulkenberg, Magnussen, Leclerc and Sainz. Perez was the only driver not to make an initial run, Force India holding him back for one big push at the end of the session.

On this last run, a scintillating final sector enabled Raikkonen to move up to second place, but an even better performance from Bottas put his fellow Finn into provisional pole. However Mercedes' jubilation was quickly extinguished by Vettel's response which was two tenths faster still to claim the top spot.

In the final seconds, Magnussen found some extra pace to slip ahead of Grosjean, and Sainz likewise found the time he needed to claim eighth from Leclerc, while Perez confirmed tenth place.

Hydraulic failure in qualifying sends Hamilton down the order