Ferrari were unable to master the rain to the same degree as their rivals, with Kimi Raikkonen pipping his team mate Sebastian Vettel to third place on Sunday's grid.

It was a disappointing day for Red bull with Max Verstappen only able to clinch seventh. Daniel Ricciardo had earlier caught out by the onset of more rain in Q2 and will start from 12th position.

After what had already been a tumultuous 24 hours for Force India, Esteban Ocon and Sergio Perez found themselves eliminated at the end of the first round.

Q1: Vettel fastest in wet and wild first round

The rain that had swept through half an hour before the start of qualifying added a certain frisson to proceedings as cars headed out onto the damp but drying Hungaroring. Teams were forced onto intermediate tyres for their initial laps, and more dark clouds overhead suggested that conditions would likely only get worse.

Valtteri Bottas opened proceedings with 1:27.245s which was immediately bettered by his team mate Lewis Hamilton and then by the two Ferraris of Kimi Raikkonen and Sebastian Vettel. Daniel Ricciardo was only 11th fastest, while a delay getting his team mate out of the garage meant Max Verstappen was the last man to set a time, slotting into sixth place behind Bottas.

Ricciardo improved to third and Verstappen to fourth on their next runs. Vettel told the Ferrari pit wall that he felt it was time to switch to slicks as he set a new top time of 1:25.176s, but the team was reticent given lightning and thunder now closing in all around the circuit.

Several drivers further back with less to lose made the change to ultrasofts, including Renault's Carlos Sainz and the two Williams of Lance Stroll and Sergey Sirotkin. Sainz duly went 2.4s faster at the top, triggering a wholesale scramble to pit lane to change of tyres as the timing screens started to resemble slot machines.

Romain Grosjean went top for Haas on 1:21.431s ahead of Renault's Nico Hulkenberg and the McLarens of Stoffel Vandoorne and Fernando Alonso. Raikkonen was able to put in a new flier to go top with 1:18.474s ahead of the latest runs from Verstappen, Bottas and Hamilton.

With the rain briefly picking up again, Ricciardo found himself in the danger zone having opted to go out on soft tyres rather than ultras. A new push put him up to 12th place with three minutes remaining, but everyone was finding more speed with each passing lap and Ricciardo soon found himself being backed up toward the elimination zone meaning he had to keep pushing.

No one had time to return to pit lane for new tyres before the chequered flag. When the dust finally settled on the session, Vettel was top of the pile with a 1:16.666s ahead of Verstappen, Bottas, Hamilton, Raikkonen and Sainz, with Grosjean ending up in seventh ahead of Hulkenberg, Alonso and Kevin Magnussen.

Ricciardo managed to scrape through with his final run putting him 12th. But on the wrong side of the cut line was Vandoorne along with Sauber's Charles Leclerc, the rookie finding wet conditions not to his liking much as had been the case last time out in Germany. Also out were both Force Indias of Sergio Perez and Esteban Ocon, together with Sirotkin. 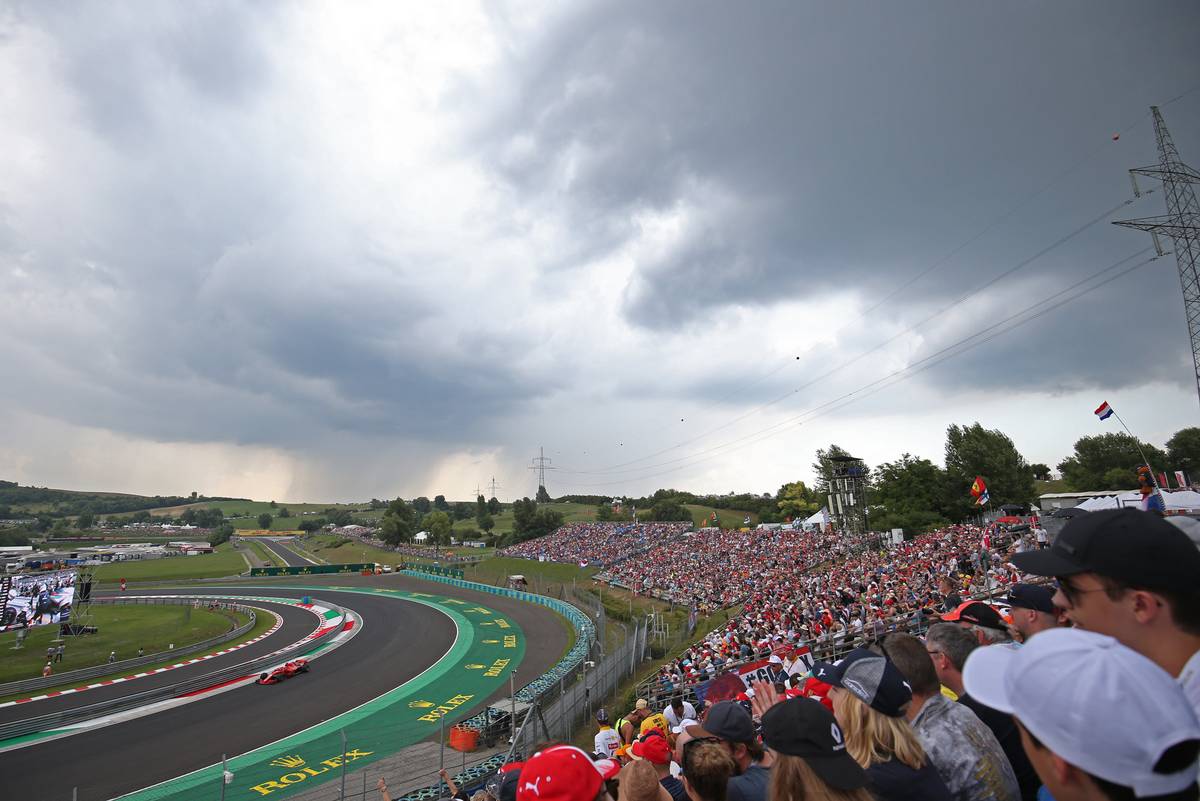 Conditions remained tricky as the second round got underway, with the radar showing more storm clouds threatening. Cars headed out on slick tyres with the exception of Vettel, and as heavy rain started to pick up again in the final sector it was clear that the Ferrari driver might have made the right call.

Vettel went on to post the first time of the round with 1:28.636s. Meanwhile the rest of the field all dived back onto pit lane to change to the inters, after having seen Pierre Gasly's Toro Rosso understeer off at turn 13.

With conditions deteriorating fast, Sainz was a full two seconds slower in second place ahead of Verstappen, Hamilton, Gasly and Bottas. Toro Rosso's Brendon Hartley had picked up seventh ahead Raikkonen, with Magnussen and Grosjean also provisionally through to Q3. Raikkonen subsequently spun at turn 7, while Stroll aquaplaned around at turn 13 and nerfed the nose of the Williams on the barrier to demonstrate how treacherous things were getting.

Badly caught out by the latest rain, Ricciardo continued to slog around the circuit. His early lap was only good enough for 13th but he was able to pick up one more place before the chequered flag, despite race control declaring DRS out of bounds for the duration. Even so, it meant he had missed the cut for Q3.

Intermediates were no longer enough, and Ericsson went as far as gambling on a switch to full wet weather tyres. Even so, the Swede found himself straying off track at turn 5 and failed tim improve his time leaving him stuck in the drop zone along with Alonso, Ricciardo, Hulkenberg and Stroll.

The rain continued to fall and everyone was forced onto full wets for the start of the final top ten pole shoot-out round. Verstappen set the first time of 1:37.923s despite going through turn 4 sideways, but he was quickly outpaced by the Mercedes cars of Hamilton and Bottas.

Raikkonen squirmed his way up to third place, while Vettel's first run was only enough for sixth behind Sainz. His next run was able to boost that up to third but he was still a second slower than Hamilton who had now posted an impressive 1:36.648s.

With the rain easing and the wet tyres leaving a vaguely drier line on the track, Raikkonen's next run put him half a second clear at the top while Sainz managed to jump up to third place between the two Silver Arrows.

The front runners dashed into pit lane for fresh wet tyres for one final run, and it helped Vettel improve to second place ahead of Raikkonen who was unable to find anything extra. However the Mercedes pair had timed their final runs to perfection and got the best possible conditions, Hamilton clinching pole with a 1:35.658s and Bottas just 0.260s back in second.

Raikkonen and Vettel had to settle for the second row, with Sainz and Gasly impressive in fifth and sixth place ahead of Verstappen. In his first Q3 appearance, Hartley secured eighth place for Toro Rosso ahead of the all-Haas pairing of Magnussen and Grosjean. 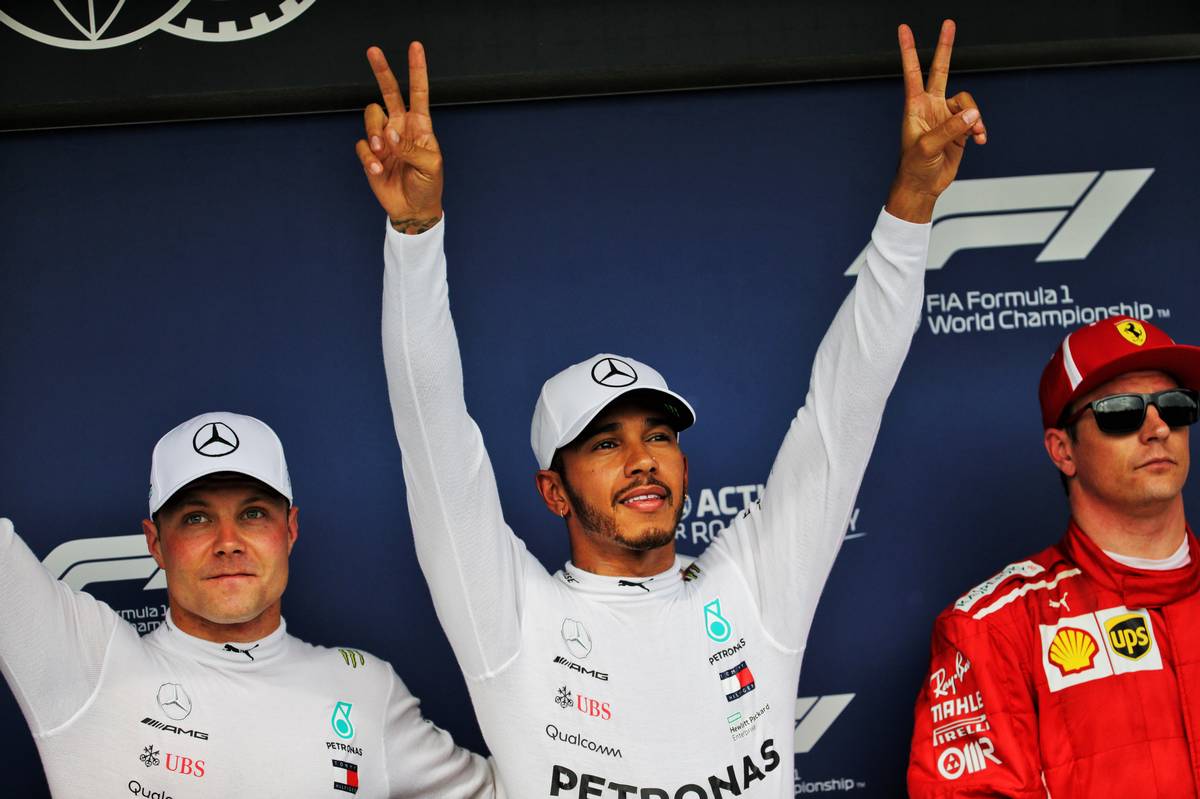 Sir Frank to Claire Williams: 'It's shitty times but keep on pushing!'

'We couldn't have expected this' says Hamilton of Hungary pole