Singapore has for so long been known as the Mercedes team's 'bogey' circuit that the idea that Lewis Hamilton could take pole position this weekend barely crossed anyone's mind before Saturday's qualifying session.

When Hamilton opened Q3 with a new track record time of 1:36.015s, there was a palpable ripple of shock around the Marina Bay Street Circuit, as it slowly dawned on everyone that no one was going to be able to match it.

In the end Hamilton was over three tenths faster than Red Bull's Max Verstappen - and double that to his title rival Sebastian Vettel, who had been favourite to take the top spot for Sunday's race.

Not even Hamilton's boss, Mercedes team principal Toto Wolff, could quite believe what he had just seen. "I can’t explain what happened on that lap," he said afterwards. "It’s stardust."

And Hamilton himself was just as stunned by the shock outcome to the session.

"That lap felt like magic. I don't know where it came from but it all came together," he said. "Today I just managed for that one lap just to get it right.

"Honestly I don’t think there was a moment in the lap that was wide or with any problems. It was just perfectly to the limit. It felt like one of the best laps that I remember feeling."

"99.9 per cent of the time it doesn't go right, but that lap - honestly, I didn't have any wheel spin, I didn't have a snap anywhere, the car was just underneath me and I managed to maximise in pretty much every corner. I can't think of anything that I could do more.

"The second lap I tried to go that little bit more - just half a meter braking later, but it was just too much and the car wasn't going to have it. I really do feel I got absolutely everything possible in that first lap."

Even so, Hamilton admitted that he didn't know for sure whether his time had been enough to clinch his 79th career pole.

"I was definitely nervous when I came in at the end, because naturally you want to deliver each time you have an opportunity."

Today's achievement was even more startling because the day hadn't got off to a great start for Mercedes in the final free practice session.

"Yesterday was looking really good for us and we came in today and made a few changes and we didn't have a good session," he admitted. "Everyone was starting on the hypersofts and they were getting the experience and we started on the softs which is a huge difference compared to the hyper.

"I was a bit nervous going into qualifying because I didn't think we had the pace. We were half a second behind these guys and I was thinking there was no way I'm going to be able to find half a second."

And indeed it looked like Hamilton's championship campaign was in peril when he came close to being eliminated at the end of Q1.

"As we went through the qualifying session again, it was a real challenge in Q1 on the ultra," he acknowledged. "Then we got into that last session, and it was just about pulling all the bits that you found over free practice and try and see if you can put it into a perfect puzzle. 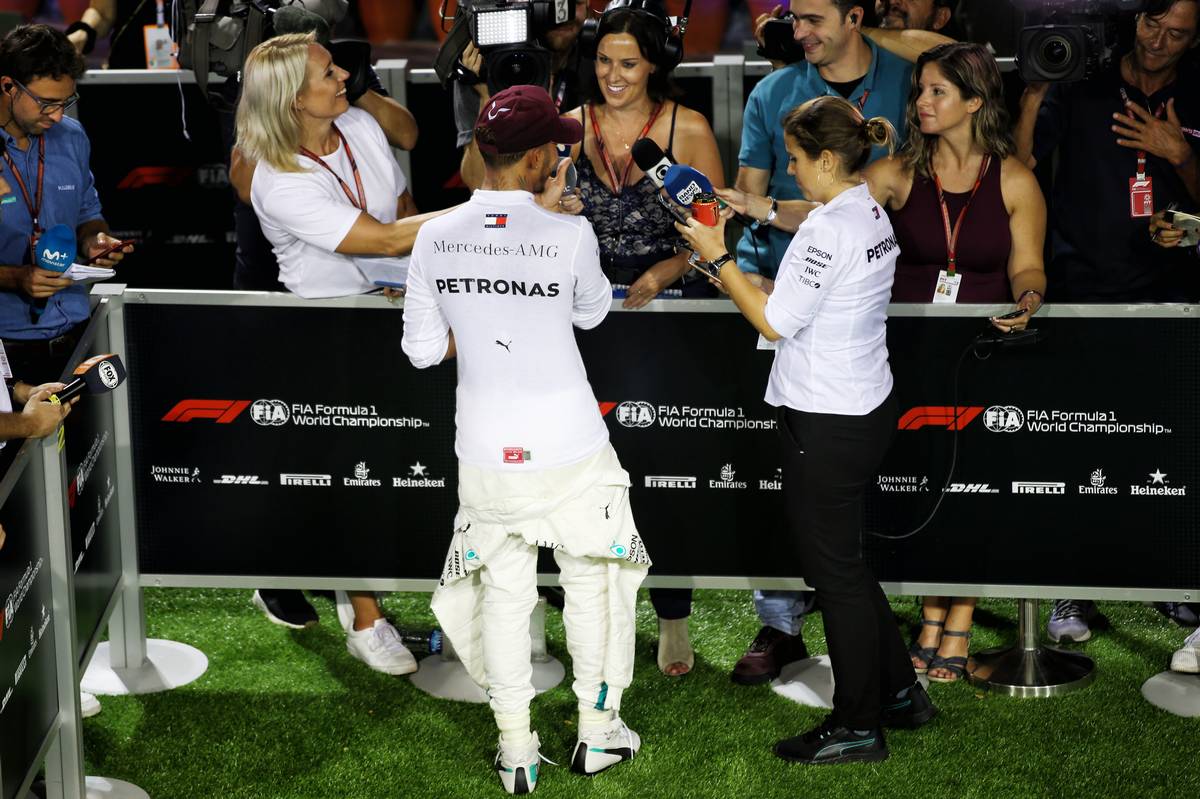 "This track is epic," he added. "It's so difficult, this track - it's the most challenging circuit I think for us of the year. It's Monaco on steroids really, even though it's longer and a lot more corners.

"It's so physical here, so naturally afterwards you're shaking, your heart's racing," he said. "Honestly I am super overwhelmed. My heart is racing. I might have an anxiety attack in a second!

"I'm just so grateful. The team has been working so hard. I'm sure everyone's team has, but the guys have just been flat out trying to see if they can bring little bits here and there.

"We knew coming into this race that the Ferraris particularly but also the Red Bulls would be hard to beat, so this is an incredible moment for us to be on pole here considering the circumstances."

Ricciardo dazed and confused by progressive drop-off in pace