Having clinched pole position for the 2018 Singapore Grand Prix in dramatic fashion on Saturday, Lewis Hamilton put that advantage to perfect use with an assured and polished run to victory for Mercedes at Marina Bay Street Circuit.

Hamilton's 69th career win puts him 40 points ahead in the drivers championship, with six races remaining.

Red Bull's Max Verstappen initially lost second place to Ferrari's Sebastian Vettel, but he was subsequently able to regain it during the single round of pit stops.

It was an unfortunate and pointless outing for Force India, with Esteban Ocon crashing out on the first lap after tangling with his team mate. Sergio Perez was also penalised for a bad-tempered clash with Williams' Sergey Sirotkin. 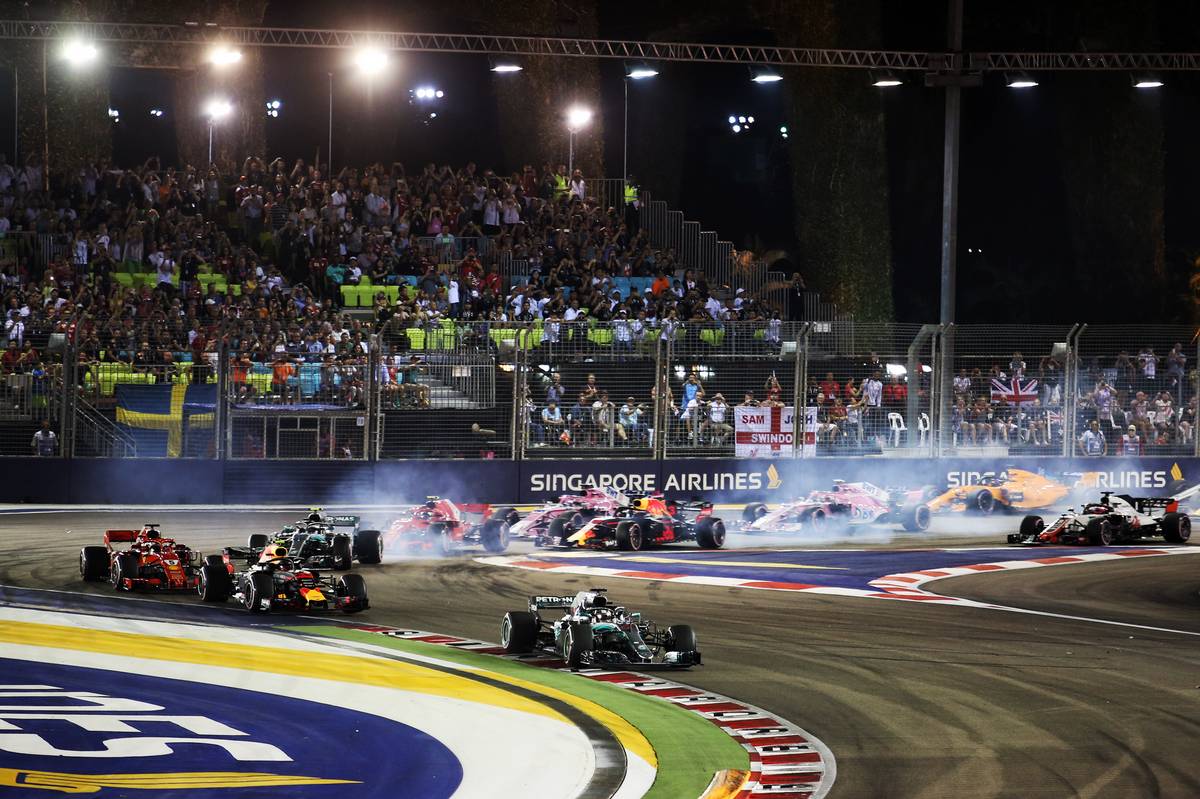 When the race got underway, Lewis Hamilton achieved a smooth launch from pole and easily made it into the first corner in the lead. Behind the Mercedes, Sebastian Vettel got alongside Max Verstappen for second place but then decided discretion was the better part of a title campaign and backed off, temporarily conceding the position to the Dutch driver. However it was just a few seconds before the superior power of the Ferrari engine made itself felt with an easy pass in turn 7.

Vettel was fortunate to complete the move before the safety car was scrambled, Esteban Ocon having smashed into the wall at turn 3. He had been squeezed wide by his Force India team mate Sergio Perez. The Mexican driver said he hadn't even been aware that Ocon had been trying a half-hearted move around the outside: "Sorry guys, there was no room, I basically did not even see him."

The clean-up of Ocon's wrecked car took five laps, with only Sergey Sirotkin using the opportunity to pit and change tyres, and then mainly because the team needed to extract some debris lodged at the front of the Williams. A cagey Hamilton then successfully managed the restart ahead of Vettel, Verstappen, Valtteri Bottas, Kimi Raikkonen and Daniel Ricciardo, with Perez still running in seventh ahead of Romain Grosjean, Fernando Alonso and Carlos Sainz. 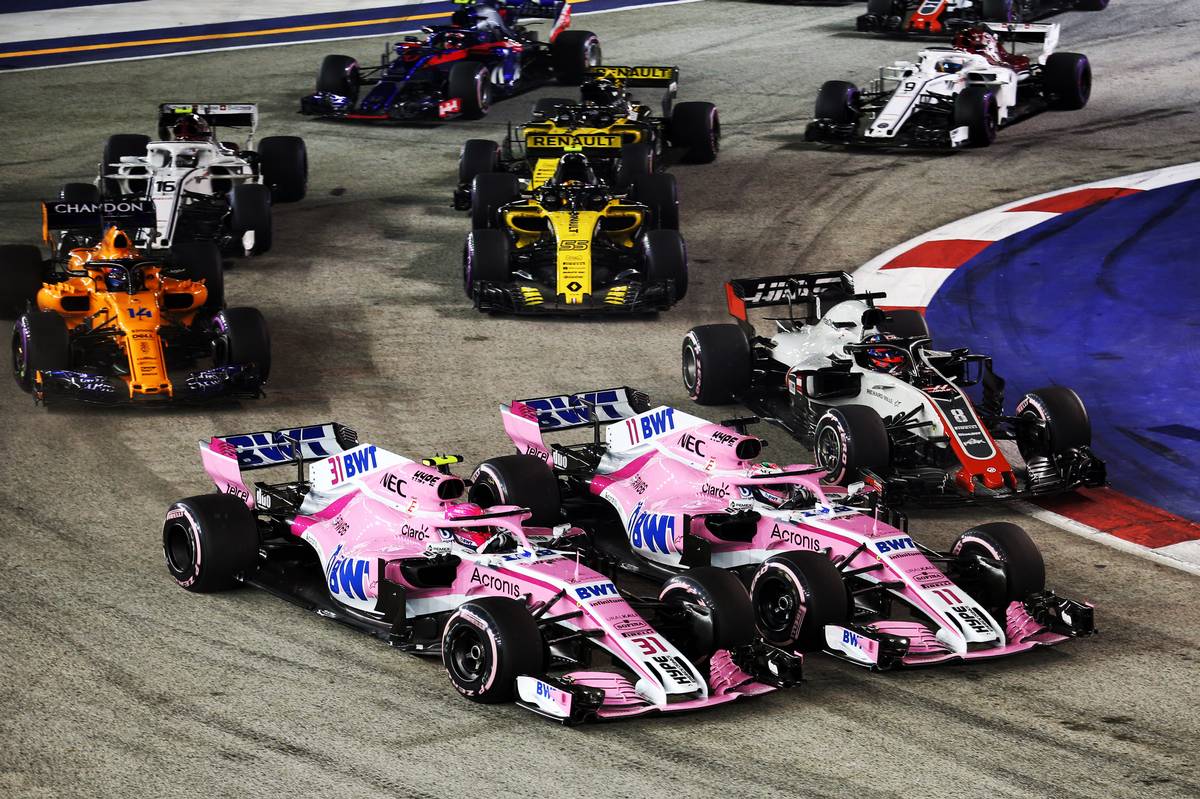 There was no change in the running order in the top ten, and Hamilton was soon around a second ahead of Vettel, putting him out of DRS range of Vettel. The leaders were all looking somewhat cautious, going surprisingly slowly in order to take extra care of their qualifying hypersoft tyres rather than have to pit early and drop behind those cars starting further back on the longer-life ultras.

Alonso had been the highest-placed driver to start on the purple tyres, and ten laps in to the race the McLaren was starting to nip at Grosjean's heels ahead of him just as a few spots of rain were felt in the air. As if in response to the unfolding situation, Hamilton suddenly picked up the pace at the front and the cars finally started to spread out.

Ferrari spied a chance to bring Vettel in at the end of lap 15 and get him back out in seventh place on ultras ahead of the Grosjean/Alonso spat. Mercedes had to react immediately and Hamilton was duly in a lap later, the team opting to fit him with a set of the soft tyres to ensure he could make it to the end of the race without another stop; despite a slow stop, Hamilton was able to get back out on track in fifth ahead of Perez and Vettel.

It took Vettel two laps to dispatch the Force India, and the delay cost him dearly when Verstappen pitted from the lead on lap 18 and came back out side-by-side with the Ferrari. This time it was Verstappen who was able to keep his foot down and take the track position despite still suffering from engine glitches that had plagued him ever since Friday free practice.

Raikkonen and Ricciardo now found themselves at the front but yet to make their pit stops. Hamilton was back up to third ahead of Verstappen and Vettel, with Bottas picking up sixth after his own visit to pit lane and ahead of Alonso, Sainz, Toro Rosso's Pierre Gasly and the two Saubers of Charles Leclerc and Marcus Ericsson. Perez and Grosjean had also made their stops, dropping well out of the top ten as a result and now mired in traffic for their pains.

Raikkonen finally pitted on lap 23 for soft tyres, coming back out just behind Bottas. With little to lose, Ricciardo stayed out in the lead in the hope that the hint of rain turned into something more significant while Hamilton hunted him down. He finally pitted on lap 27 for a switch to ultras, safely resuming in sixth place. Although he was now ten seconds behind Raikkonen, the Australian was on the faster compound for the remainder of the race.

Elsewhere, anyone still running on their original hypersoft tyres was hitting real problems. Gasly locked up twice, making himself easy prey for Leclerc who pulled off a smart move on the Toro Rosso through turn 13 on lap 27 to pick up ninth place. A resigned Gasly pitted moments later for new ultras to get him through the rest of the evening, putting him down to 18th place. 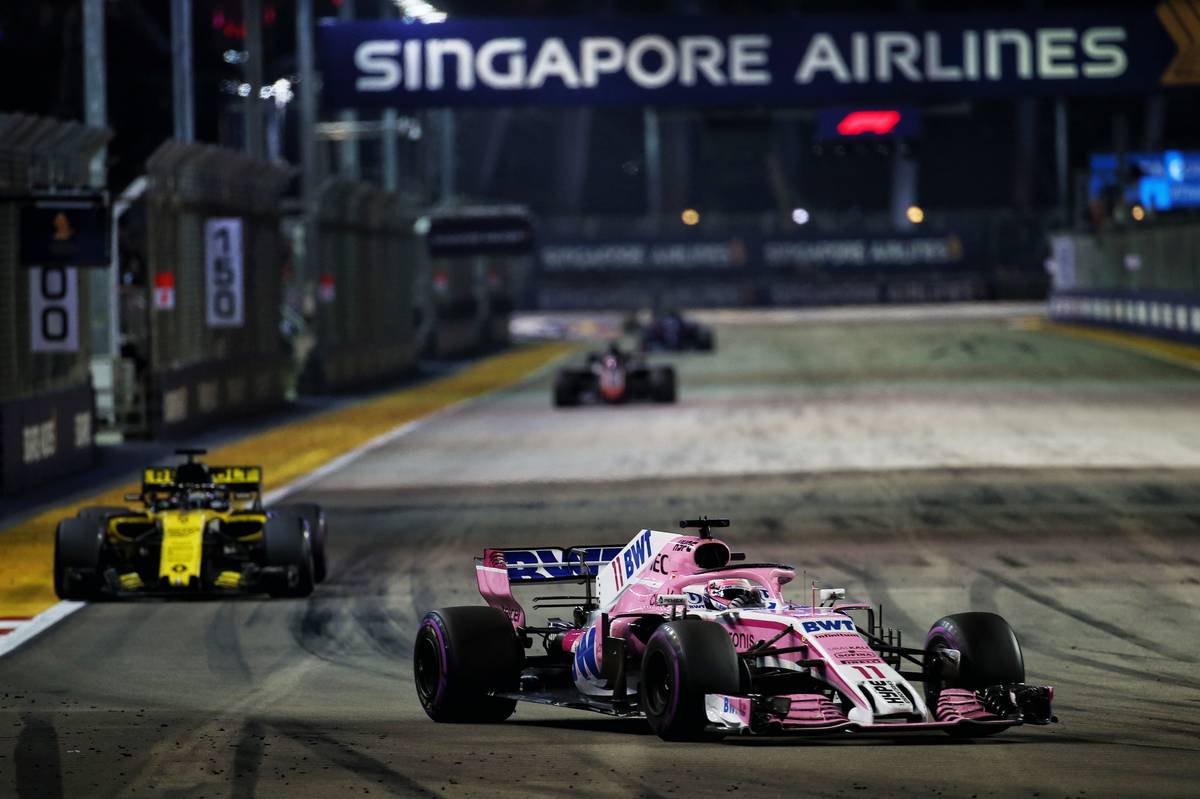 Not that it was smooth sailing for those who had pitted, either. Perez was growing increasingly unhappy with staring at the back of Sirotkin, complaining over the team radio that the Williams was moving under braking. His patience finally snapped on lap 34 and he made a determined lunge that put the two of them side-by-side, and contact was painfully inevitable. Perez was forced to pit for a puncture and floor damage putting him a lap down, and with a drive-thru penalty for causing the collision. Sirotkin continued but was now ailing, easily passed by Renault's Nico Hulkenberg for 13th place.

The backmarkers were also causing problems for the leaders as they came round to lap the slower cars. Hamilton came up on Grosjean just as the Haas was in a fierce battle for position with Sirotkin. The delay was fraught with danger for the race leader, and allowed Verstappen to close right up on the back of the Mercedes. However once the blockage was circumnavigated - with Grosjean getting a penalty for ignoring blue flags - the gap between the top two soon opened back up to over three seconds meaning that Hamilton was able to breath easy once more. 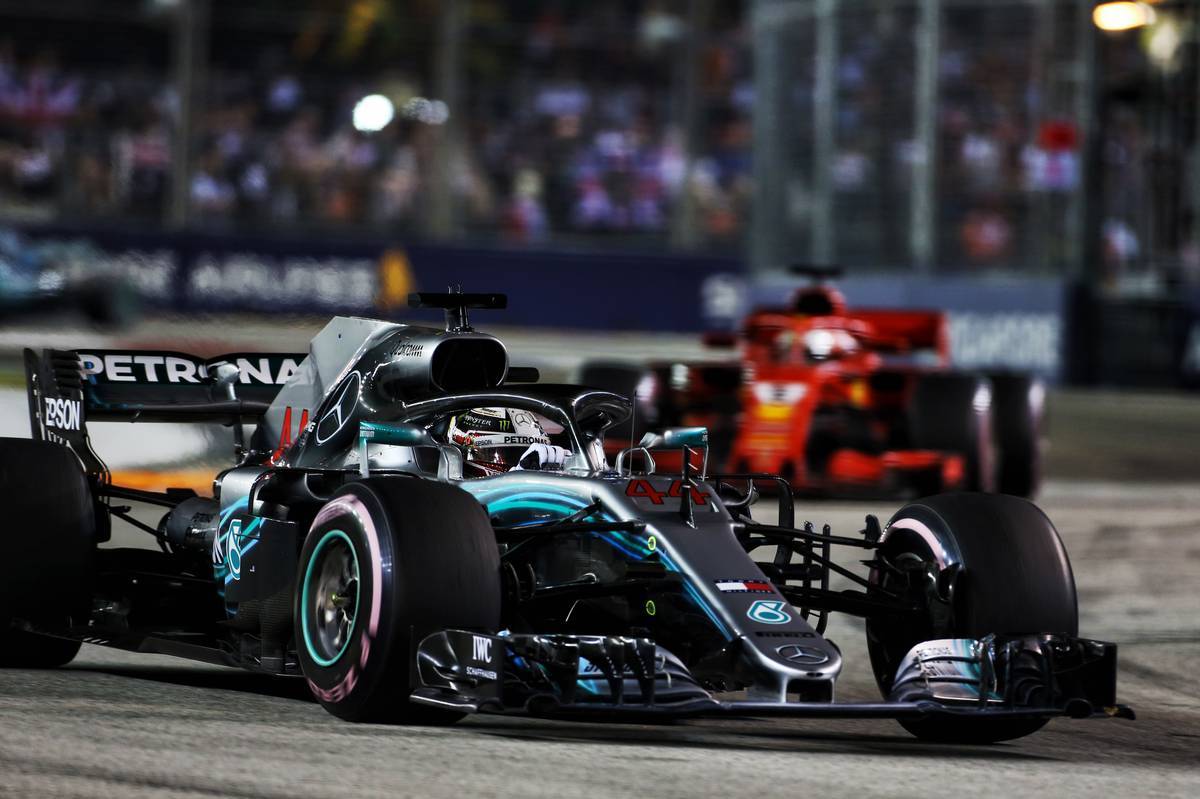 By lap 45 the top six were in a race of their own, all running within 20 seconds of each other. By the finish that had stretched out to 40 seconds as tyre wear took its toll on many drivers. Most at risk in the closing laps was Vettel, who had made the earliest pit stop of the leaders and who was pushing his ultrasoft tyres to the absolute limit. However he seemed to be able to maintain his pace without any dramas, and then the chequered flag came out he was able to join Hamilton and Verstappen on the podium ahead of Bottas, Raikkonen and Ricciardo.

Alonso was the only other driver to stay on the lead lap as he took seventh place for McLaren ahead of Sainz, Leclerc and Hulkenberg. Missing out on points this week but making it to the end of the race were Marcus Ericsson, Stoffel Vandoorne, Romain Grosjean, Pierre Gasly, Lance Stroll, Sergio Perez, Brendon Hartley and Kevin Magnussen.

Finishing last was Sergey Sirotkin, who went two laps down after being given a stop-go penalty on lap 45 for forcing Hartley off the track in turn 14. Esteban Ocon was the only retirement of the Grand Prix after his first lap accident with perez. 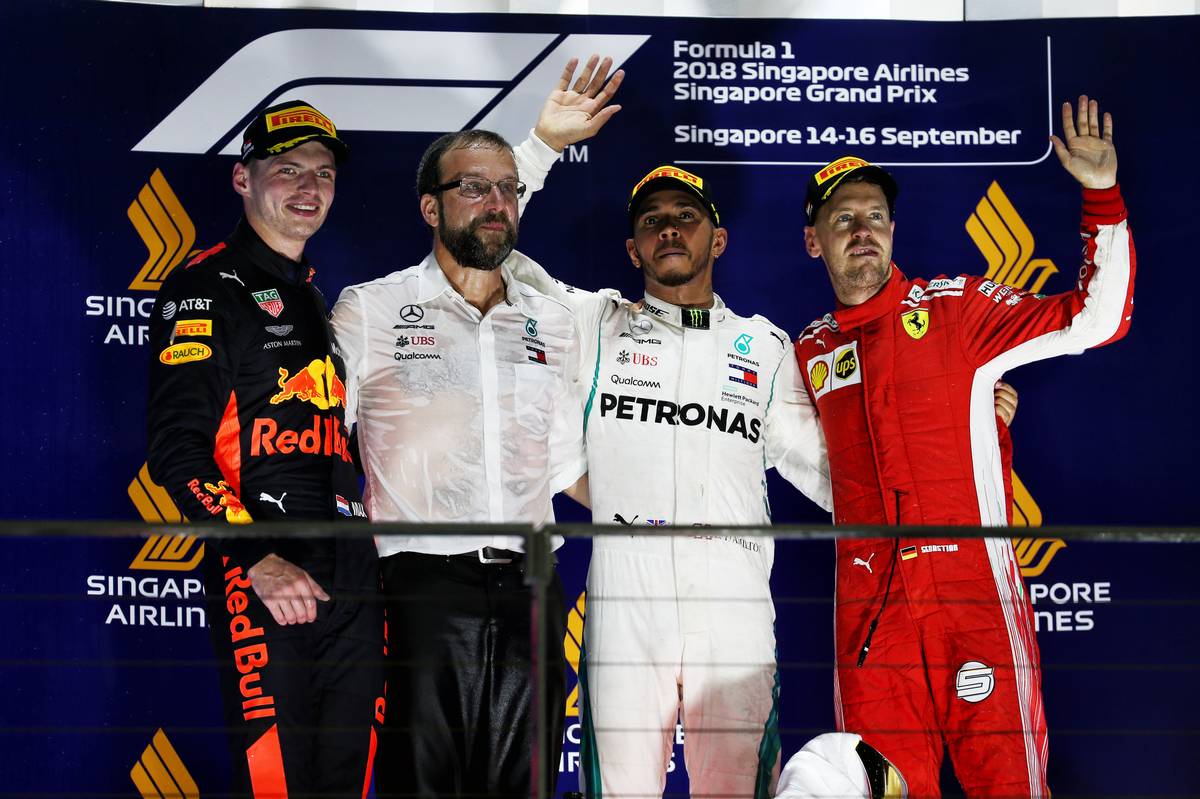