Valtteri Bottas is doing a good job "getting under Lewis Hamilton's skin" says 2016 world champion Nico Rosberg, the man who was replaced by the Finn in the plum Mercedes team.

After a disappointing 2018 campaign in which he failed to win a race or challenge his team mate, Bottas hit the ground running in Melbourne, outpacing Hamilton and achieving a dominant lights-to-flag win.

As someone who knows what it takes to defeat Hamilton, Rosberg is impressed with what he's seen so far this year from the Australian Grand Prix winner.

"Valtteri is really trying to get under Lewis’ skin at the moment. He’s giving everything, and I think he’s doing a good job," Rosberg told Sky Sports F1.

"It’s always small steps at a time, and you’ve got to pull Lewis down from his high-flying confidence.

"He’s doing it, and then you start to see Lewis getting a few doubts and things like that. That’s the way to go for him."

Bottas underwent a reset over the winter, insisting he's approaching the 2019 season with a different mindset.

"I think he’s done a very good job over the winter to reset," added Rosberg.

"He sent a few messages with the beard, over the radio in Melbourne, a rather strong message, the race start, an awesome start - all these things add up.

"It just gives you this momentum and self-confidence that you need." 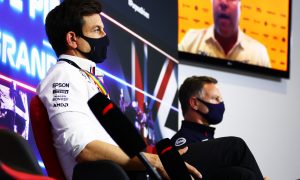