Mercedes succeeded in taking their third front-row lockout of the 2019 season after Valtteri Bottas pipped his team mate Lewis Hamilton to pole in today's qualifying for the Azerbaijan Grand Prix in Baku.

"Valtteri did an exceptional job," said Hamilton, who had been on provisional pole until the final seconds of the session when a last push from the Finn secured the top spot by just 0.059s.

It was something of an upset, after new upgrades has appeared to give Ferrari a huge advantage over Mercedes and the rest of the field in practice.

"It's been so close all weekend, Ferrari have looked incredibly quick" Hamilton acknowledged in a post-qualifying interview with Sky Sports F1's Paul di Resta. "We came here without an upgrade, the Ferraris looked particularly quick.

"For us to lock out the front row in the circumstances I'm really grateful for, and puts us in a fighting position tomorrow.

"Pace-wise we are slightly closer in race trim than it seemed in qualifying. Valtteri is always quick here and I've had my work cut out this weekend."

As for Bottas, he admitted in typically understated fashion that it was "a nice feeling" to pip Hamilton to the top spot on the final lap of a disrupted qualifying session.

"As a team, we did a really good job after such a difficult practice," said the Finn, who was also on pole in Shanghai two weeks ago.

"It's all about small margins and I got a good tow on the last lap," he added. "The corners I had to drive as well, but it's fine details and I hit the sweet spot."

Ferrari's challenge seemed to be compromised by two prolonged red flag periods during the session - including one foe Charles Leclerc - which meant qualifying ran much deeper into the cooler evening conditions than had been expecting. 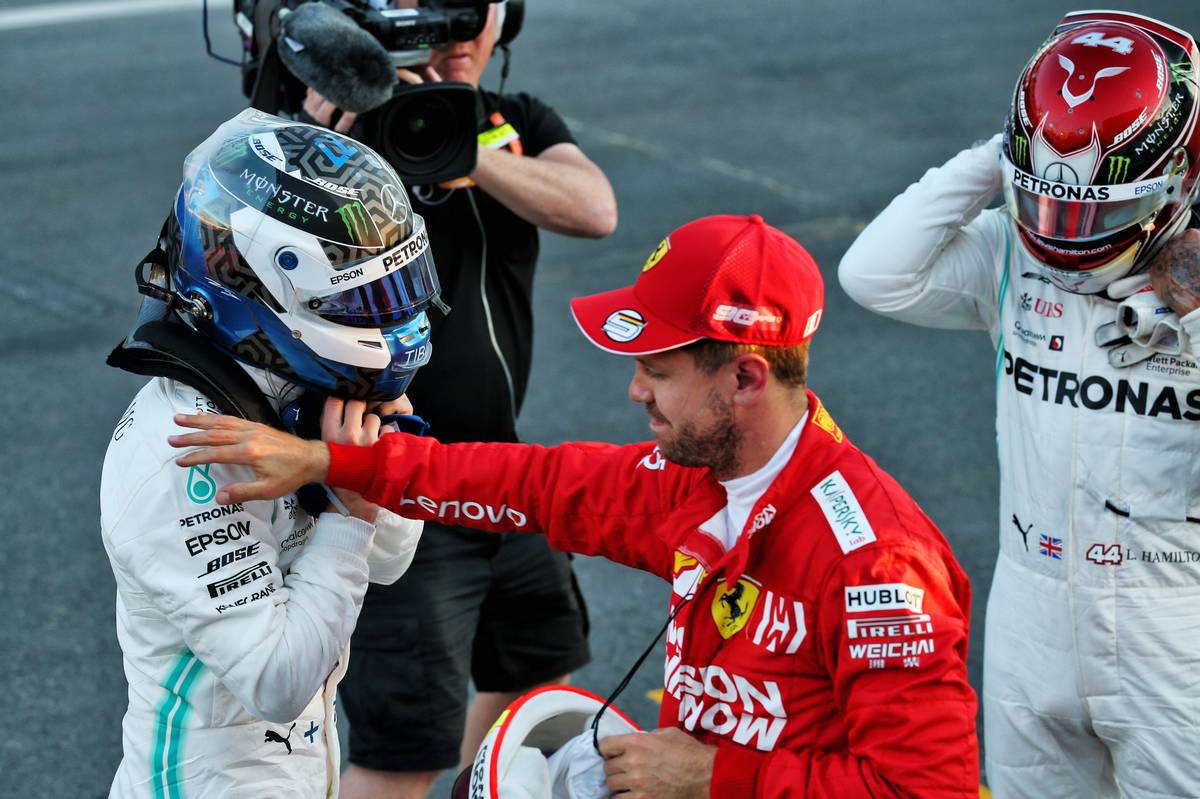 The colder temperatures appeared to 'level the playing field' to a degree and even up the performances of Ferrari and Mercedes from practice earlier in the way when the track had been much warmer.

That was the only reason that Toto Wolff could find to explain the outcome of qualifying, which was the last thing that the Mercedes team principal had been expecting on Saturday.

"The longer qualie went, the better we went," he told Ted Kravitz after the end of the session. "With those temperatures and getting the tyre into the right window it was really tricky, and we were never there.

"Then suddenly the temperatures dropped another few degrees, and the grip was much better," he said. "It was a very glad combination."

However Wolff said that if Leclerc hadn't crashed out in Q2 then the Ferrari driver would still have been the favourite for pole.

"Charles should have been on pole today and I think if he would have made it to Q3 then he probably would have been. But it's how things work out in Formula 1."

But Wolff wanted to take nothing away from the achievements of his own drivers today, and in particular the pole winner Valtteri Bottas.

"He's deserved it, to be on pole against Lewis is strong," he said.

Leclerc owns up: 'I deserve what happened today'