Valtteri Bottas put in a textbook performance to clinch his second race victory of the season in the 2019 Azerbaijan Grand Prix.

The Finn looked composed and comfortable throughout a surprisingly incident-free race on Baku City Circuit, his Mercedes team mate Lewis Hamilton having to settle for second after an initial furious wheel-to-wheel battle between the pair at the start.

Despite being considered to have the much faster car this weekend, Ferrari seemed unable to match the Silver Arrows for race pace. Sebastian Vettel ultimately finished in third ahead of Max Verstappen and Charles Leclerc, who pulled off a nice bit of damage limitation after his crash in qualifying the previous day. 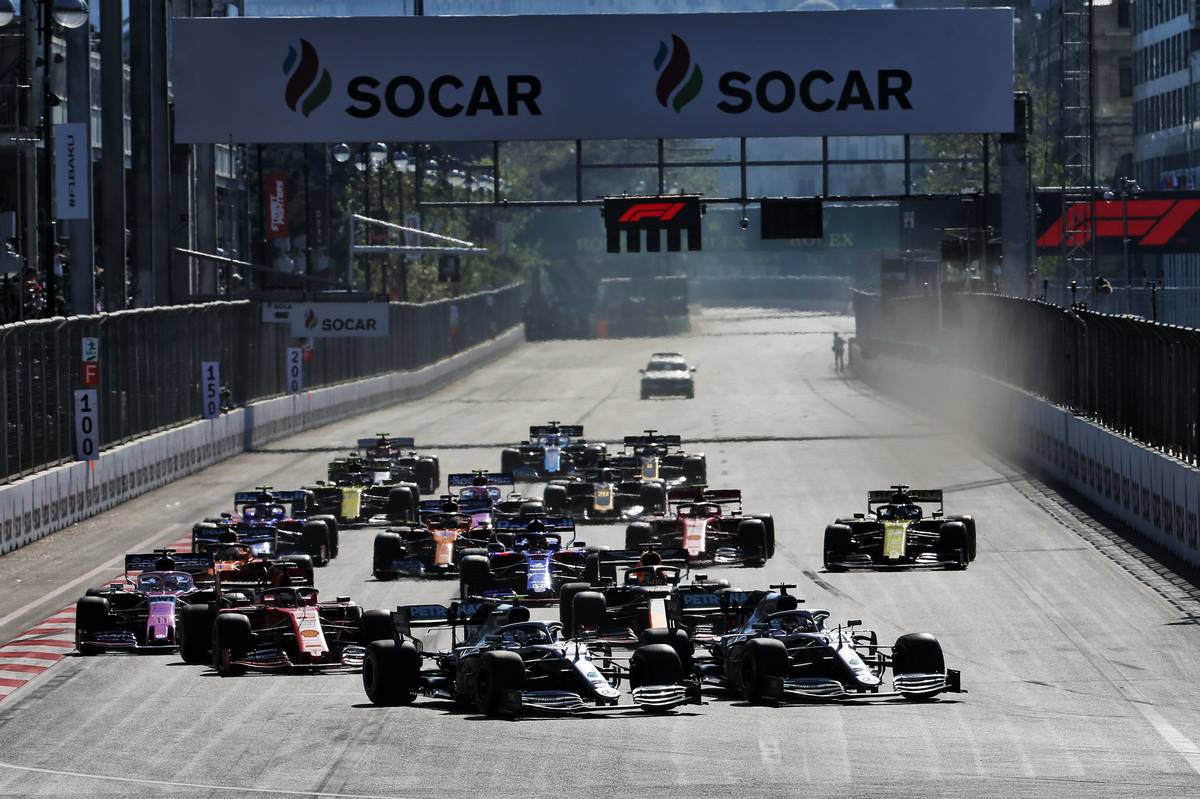 With three cars required to start the race from pit lane - Robert Kubica, Kimi Raikkonen and Pierre Gasly all sent to the naughty step for various rules infractions over the course of the weekend - it was a somewhat depleted grid of just 17 cars that lined up in the afternoon sunshine of Baku, headed by the two Mercedes cars of Valtteri Bottas and Lewis Hamilton.

When the lights went out, a great start from Hamilton meant that the two Silver Arrows battled wheel-to-wheel through the first two corners before Bottas finally consolidated his pole position, forcing Hamilton to settle for second. Behind them, Sebastian Vettel maintained third place in the Ferrari, but Max Verstappen had dropped fourth place to Sergio Perez.

There was a good start to the race for Lando Norris, the McLaren getting past Toro Rosso's Daniil Kvyat and immediately sniping at the back of the Red Bull. Carlos Sainz and Daniel Ricciardo also picked up places at the start, at the expense of Charles Leclerc whose medium tyre-shod Ferrari was slow off the line compared to those on soft tyres around him, the car having been substantially rebuilt overnight following his qualifying accident.

Leclerc was soon back up to speed, successfully challenging Ricciardo for ninth. The Renault was also put to the sword by Lance Stroll, who was showing that Racing Point's strong form this weekend was by no means limited to Perez. On the other side of the equation, Kvyat was struggling on his worn soft compound tyres in the open laps and in full reverse mode. He rapidly dropped out of the top ten after a succession of passes by the likes of Sainz, Leclerc, Stroll, Ricciardo and Alexander Albon before finally submitting to the inevitable and pitting on lap 6 for a new set of longer-lasting mediums.

Perez was also on the wane, losing fourth place to Verstappen and then another to Leclerc next time around. Verstappen himself was complaining about problems with engine braking, and it was no surprise when Leclerc blasted past him down the main straight with the help of DRS and the slipstream on lap 10 to take up fourth place. He was soon making deep cuts into the gap to his team mate ahead.

The two Alfa Romeos had been early visitors to pit lane for a change of tyres, and both Renaults were not long in following suit. Vettel became the first of the leaders to come in on lap 12, perhaps partly to bypass the need for team orders with Leclerc fast approaching, and he came back out in fifth place. Bottas responded by coming in next time by, maintaining his track advantage over the Ferrari when he came back out. 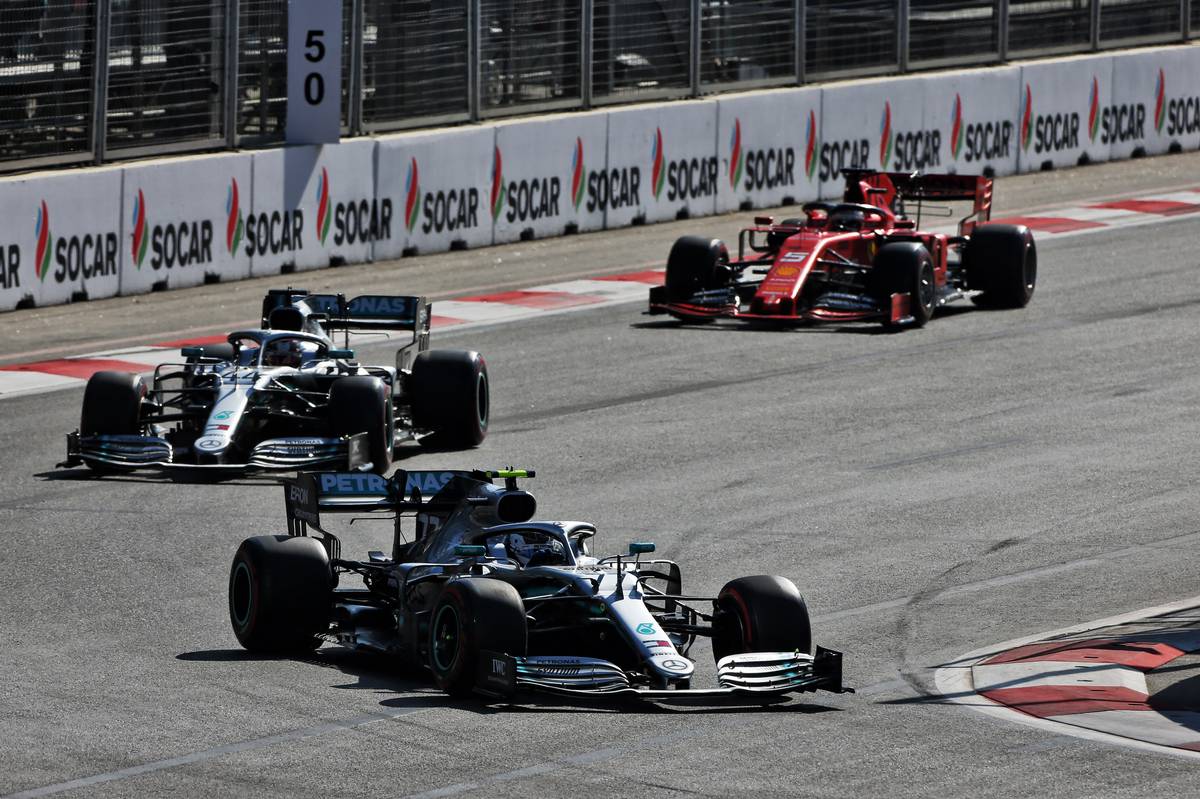 Hamilton was next to come in with similar efficacy, Verstappen pitting on the following lap. The early stops promoted Leclerc to the lead on his much longer planned first stint, followed by Bottas, Hamilton and Vettel, with Verstappen dropping to sixth. That put him behind his team mate Pierre Gasly, who like Leclerc had started the race on mediums and still had a long ways to go before even thinking about troubling the Red Bull pit crew for a service. Unsurprisingly therefore, team strategy quickly put the Dutch driver on fresher tyres ahead of the Frenchman.

With 18 laps in the books, Perez had dropped 15 seconds behind the Red Bulls and was in seventh place, followed by the McLarens of Norris and Sainz who were showing surprisingly solid form in race trim after their slump in Shanghai. Kvyat rounded out the top ten after he was able to get back up to speed after his early plummet down the running order. Now the question was whether the medium tyres would carry them the remaining race distance or whether anyone would be forced into a second pit stop. It was a question complicated by the possibility of a safety car, even though it had proved to be a remarkably incident-free first half to the race.

The focus on preserving tyres meant that the field started to close up again rather than stretch out, and soon Leclerc's lead was down to just over a second from Bottas with a similar margin back to Hamilton and then to Vettel. If Ferrari's plan was to use Leclerc to back the Silver Arrows into Vettel's clutches, then the bubble burst on lap 32 when Bottas blasted by Leclerc to retake the lead, Hamilton following suit next time by. Leclerc gave no resistance to his team mate before finally pitting on lap 35 for his own long-awaited set of soft tyres. Returning to the track he was immediately pitched into a battle for fifth place with Gasly, which was finally resolved in the Monegasque's favour albeit not without some serious effort. 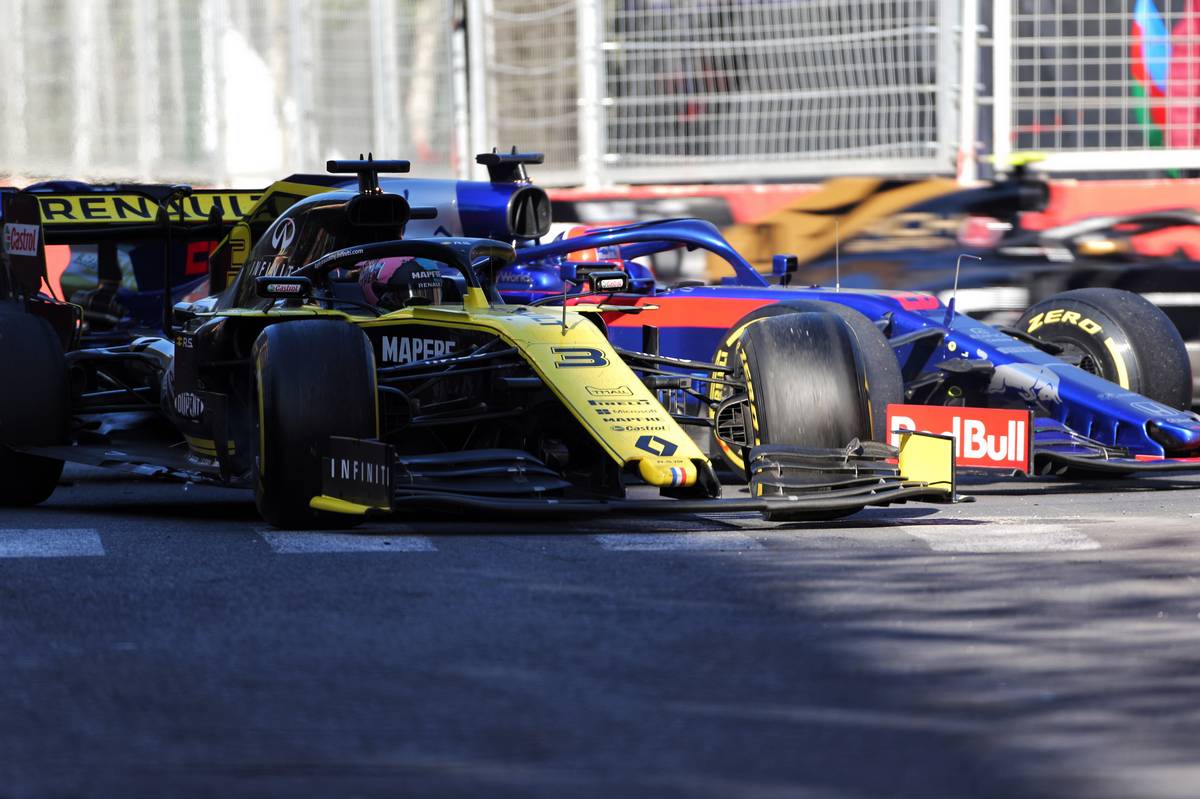 Despite Baku's bruising reputation, the first retirement of the race didn't materialise until lap 31 of 51 when Ricciardo and Kvyat both ran into the run-off area at turn 3. Although no initial contact had been made, Ricciardo committed a rather embarrassing blunder when he then reversed into the still-stationary Toro Rosso in his haste to get back out on track. Although a very low-speed incident, it nonetheless resulted in both Ricciardo and Kvyat limping back to pit lane to retire.

Next out of the race was Gasly, with the RB15 suddenly losing power and forcing him to pull into one of the escape roads, triggering a Virtual Safety Car on lap 39. Almost at the same time, Romain Grosjean made a low-key exit from the race when he pulled into the Haas garage due to brake issues with the VF-19.

Although there were the usual grumbles from the drivers about VSC restart procedures, the race resumed on lap 41 without any significant changes to the order or relative gaps of the top four. However the cooling conditions weren't suiting Leclerc's soft compound tyres, and he fell a long way back from Verstappen. He ended up opting for an extra pit stop in pursuit of the bonus point for fastest lap instead, which he duly picked up.

Not was the race at the front entirely over yet, with Hamilton inching his way into DRS range of Bottas and lining up his team mate for an overtaking attempt. In the end a minor mistake by Hamilton at the end of the penultimate lap meant that he didn't then have the chance to pounce in the time remaining, and Bottas duly picked up victory at the head of Mercedes' fourth 1-2 of 2019 to put himself back at the top of the drivers championship. 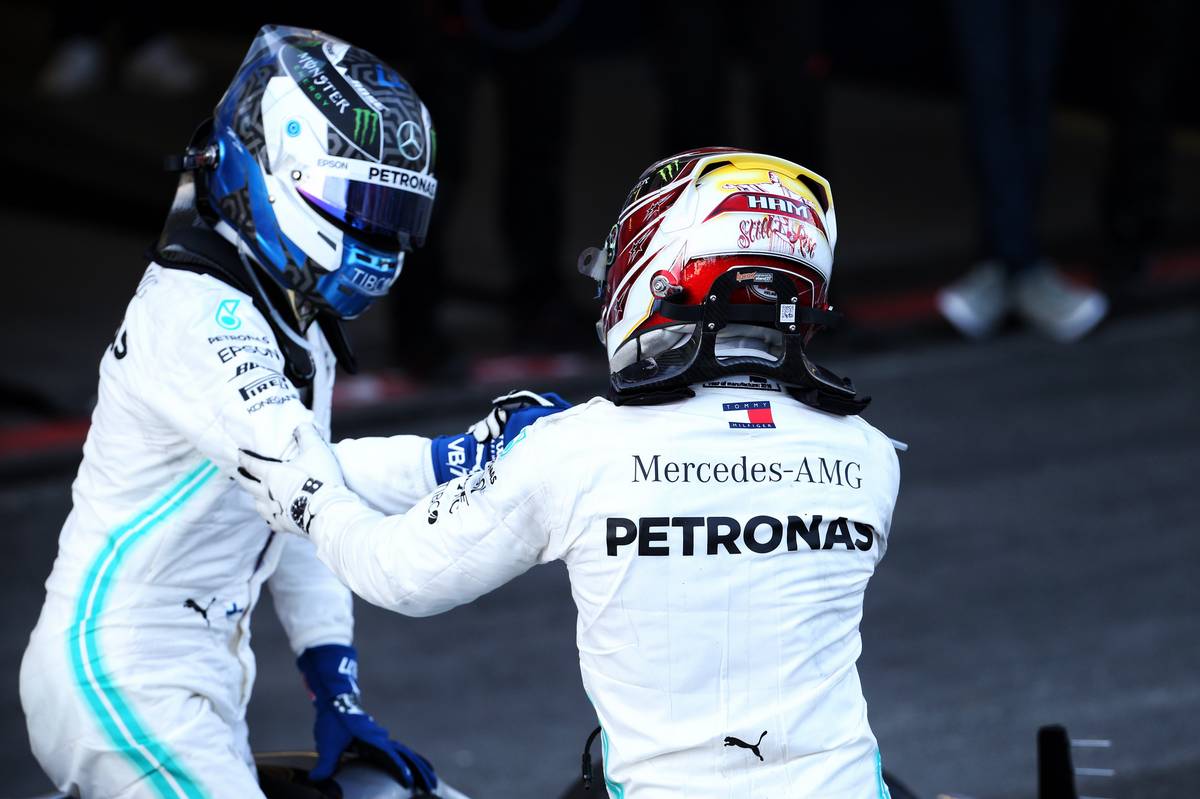 Vettel was almost ten seconds off the pace of the winning pair, followed by Verstappen, Leclerc, Perez, Sainz, Norris, Stroll and Kimi Raikkonen, who was a full lap down by the finish. Missing out on points in Baku were Alexander Albon, Antonio Giovinazzi, Kevin Magnussen, Nico Hulkenberg and George Russell.

The last man still on track at the chequered flag was Williams' Robert Kubica. To add to his enforced pit lane start following an accident in qualifying, the Pole also suffered a drive-through penalty after the team ushered him out of the garage prematurely before the start of the race.