It’s the most iconic and challenging track in Grand Prix racing, with as many pitfalls as it has corners, one of which is the slowest in F1.

But who said that Monaco was slow?

Certainly not Charles Leclerc who, for all of Ferrari's comedy of errors that deprived the local hero from a spot in Q3, still clocked in at the start of qualifying with a dazzling 325 km/h top speed!

The Ferrari driver's blast through the speed trap and the tunnel was nearly matched by team mate Sebastian Vettel, but also by Daniel Ricciardo whose performance indicates that Renault is once again running its engines at full capacity.

Everyone runs high downforce levels at Monaco, a fact that also underlines the health of the Ferrari and Renault units.

Looking towards the bottom of the readings, Max Verstappen's 316.4 km/h performance points once again to the efficiency of Red Bull's RB15 chassis.

If there's one man who can pull off an upset this afternoon and break the Mercs' supremacy, it's Max! 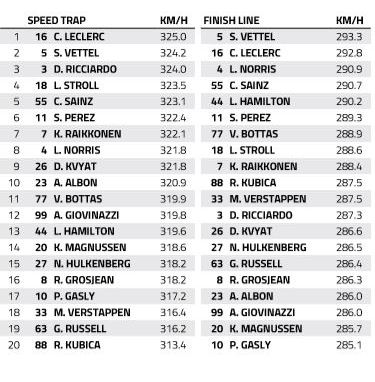 Hamilton: 'I'd be a one-time world champion without Niki'

Perez says no rain will mean 'great pain' at Monaco