Sebastian Vettel might have crossed the line in first place at the Circuit Gilles-Villeneuve, but victory in the 2019 Canadian Grand Prix actually went to Mercedes' Lewis Hamilton.

That's because the Ferrari driver was handed a dramatic five second penalty for going off-track during a pitched battle between the pair, and then returning in an unsafe manner.

Charles Leclerc finished in third place, with Valtteri Bottas fourth after a late pit stop for fresh tyres enabling the Finn to pick up the bonus point for fastest lap.

Montreal had served up some gorgeous summer weather for race day, with 19 cars baking under the beating sun as they lined up on the grid for the start, plus a 20th consigned to getting underway from pit road following Kevin Magnussen's big accident in the Haas during qualifying.

This time there was the unusual sight of having a car other than a Mercedes starting at the front, Ferrari's Sebastian Vettel having taken a scorching pole on Saturday. Meanwhile there was uncharacteristic anxiety in the Silver Arrows camp, after they spent the morning fixing a hydraulic leak on Lewis Hamilton's car which was due to start alongside Vettel on the front row. Problems persisted with a stuttering start to the formation lap: had the issues been fully resolved, or was the Briton's race compromised from the get-go? 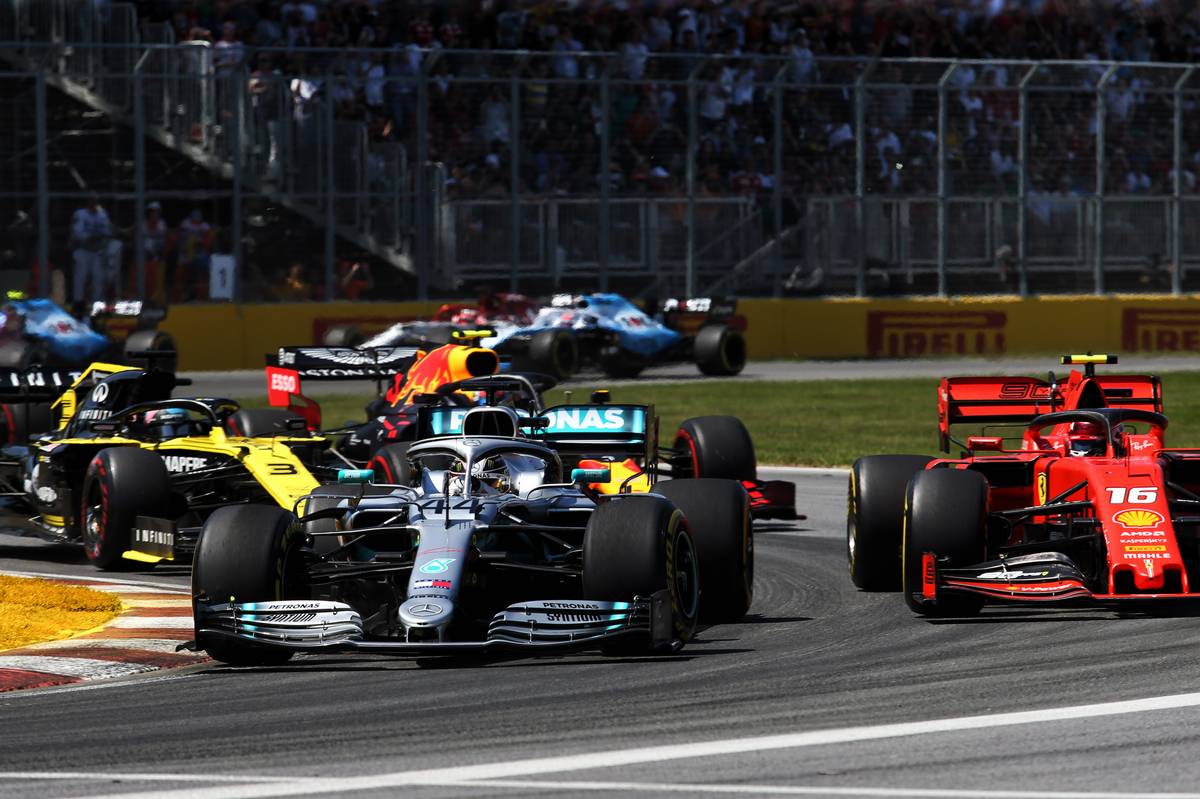 When the lights went out, Vettel confidently took the lead into the first corner while Hamilton's more modest start allowed him to fend off an early attack from Charles Leclerc. Daniel Ricciardo maintained fourth place in the Renault ahead of Pierre Gasly, but there was bad news for Valtteri Bottas who lost a place to Nico Hulkenberg on the first lap. It was almost as frustrating a start for Max Verstappen, who was unable to make an early move on Lando Norris stick in part due to the McLaren starting on the soft compound while the Red Bull was on the hard tyres.

Daniil Kvyat was running up in the top ten, but his Toro Rosso team mate Alexander Albon had been in the wars further back and damaged his front wing jostling in traffic which forced him to make a very early stop, where he also took the opportunity to make the switch to hard tyres in a bid to make it all the way to the finish.

Seeking a similar tyre strategy, next in for service was Carlos Sainz on lap 4, Gasly then pitting from fifth on lap 7 and Ricciardo responding next time round from fourth. Despite also starting on the soft tyres, his team mate stayed out ten laps longer; but by then Hulkenberg's waning pace had allowed the top three to pull out a 20 second lead before the Renault finally came in on lap 17 and released Bottas and Verstappen to take up the chase. When he came back out in seventh place, Hulkenberg was notably off the pace compared to Ricciardo and anxious about gearbox issues. 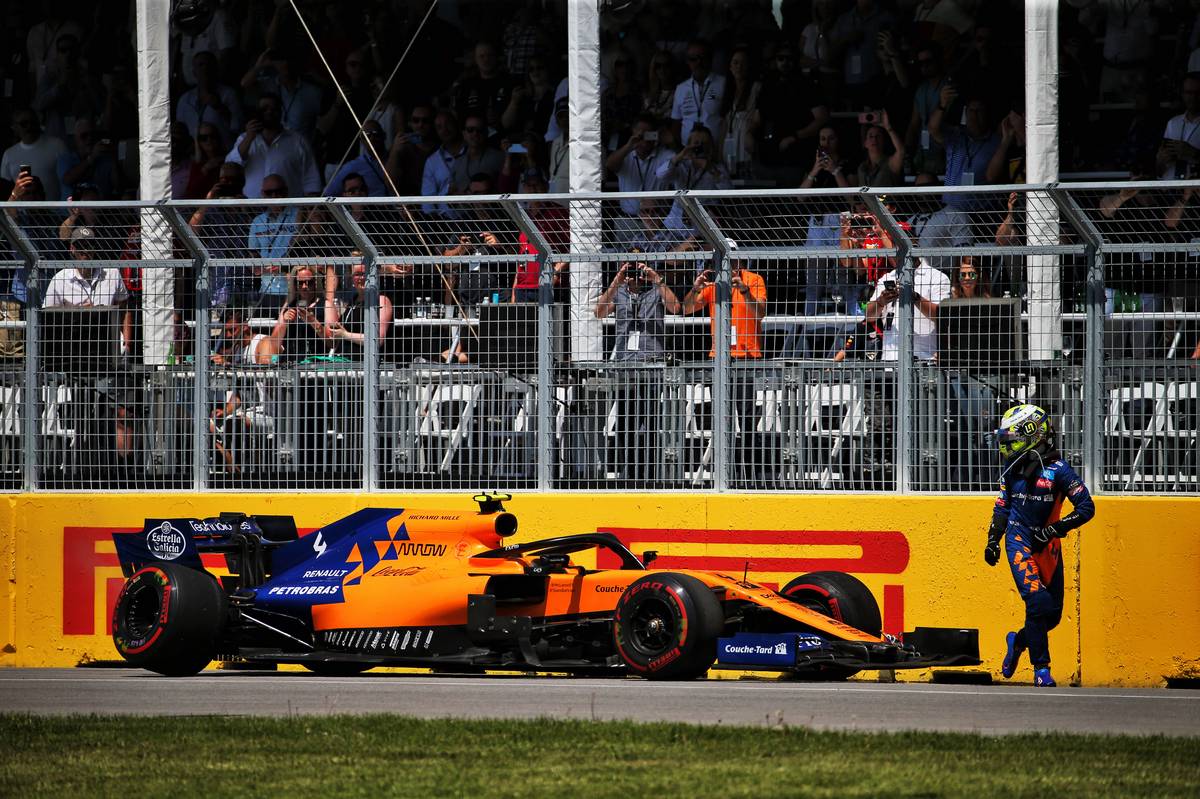 Although two seconds in arrears of Vettel, Hamilton was showing no signs of any ongoing effects from his pre-race technical issues. Instead, it proved to be Lando Norris who became the first retirement on lap 10, and in somewhat unusual circumstances. His right rear brakes appeared to catch fire and and melt the suspension, forcing him to pull over at pit exit where he jumped out and left the stricken MCL34 to the marshals to clean up under extended local waved yellows.

By lap 27 the front runners were starting to struggle on their first set of mediums, and Vettel was the first to blink. He was able to get back out on track ahead of Bottas in fourth, while Hamilton had to put in an extra two lap to ensure he would also maintain relative track position. When Bottas pitted on lap 31 he was less fortunate and dropped to sixth place, where he was sandwiched between Ricciardo and Hulkenberg.

Leclerc had inherited the lead but he haemorrhaged time on his well worn tyres before finally being called in on lap 34, which meant he dropped behind the yet-to-stop Verstappen. Fortunately for Leclerc, the difference in tyre wear made it easy for the Ferrari to pass the Red Bull at the final corner on lap 36. However Bottas found it a lot harder to get around Ricciardo, the Finn thwarted time and again in the DRS run down to the final chicane before finally pulling it off on lap 39.

The race had become a two-horse affair, and Hamilton seemed to have the edge as he ate into Vettel's lead to get within DRS range only to lock up into the hairpin and fall back again. Behind them, the rest of the top six consisting of Leclerc, Verstappen, Bottas and Ricciardo were running around with gaps of around ten seconds between them after 45 laps. Rounding out the top ten were Hulkenberg, a yet-to-stop Lance Stroll, then Gasly and Sainz with Kvyat the last man on the lead lap in 11th. When Stroll did stop a few minutes later, he was still able to hold on to tenth place when he came back out. 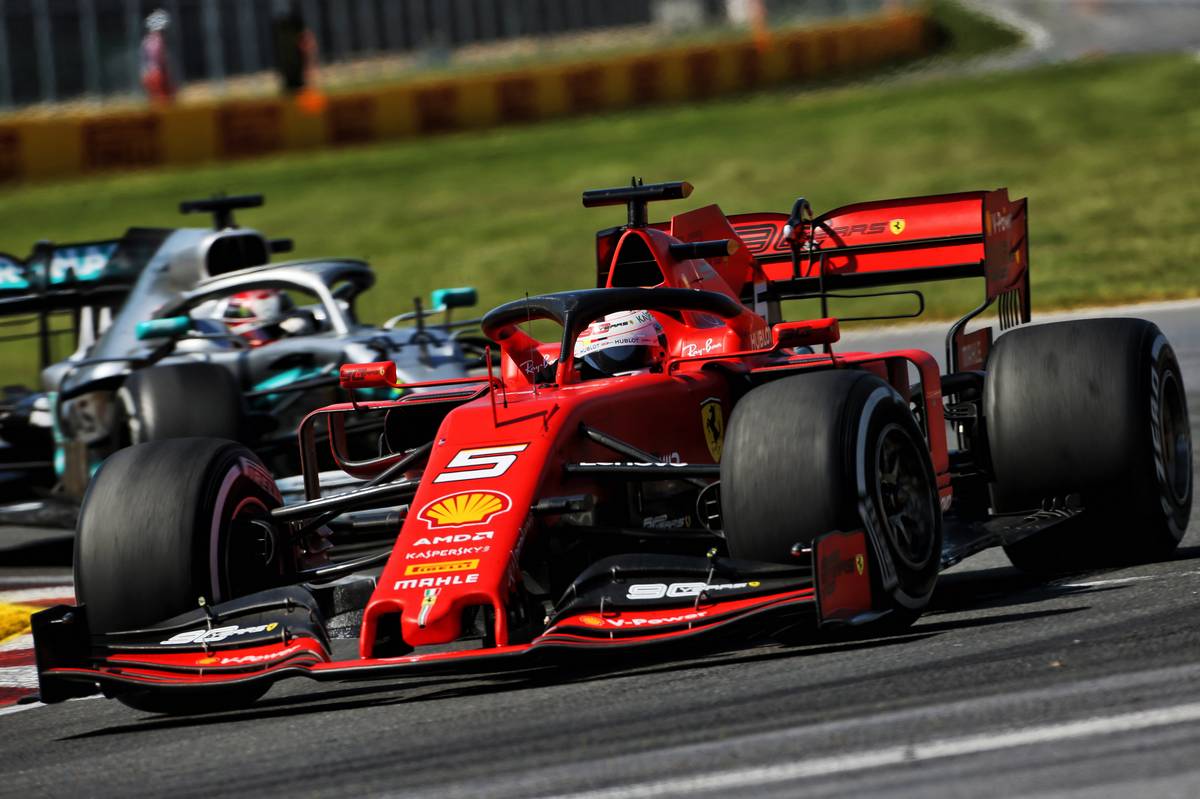 Hamilton once again started to apply pressure to the leader, and on lap 48 the Ferrari lost rear grip at turn 3 and overshot the chicane, giving Hamilton half a chance of squeezing past before he thought better of it after getting pushed up close to the outside wall. Vettel was placed under investigation for an unsafe return to the track and forcing another driver (Hamilton) off the track; after deliberation the stewards handed him a controversial five second time penalty. "They are stealing the race from us!" cried a furious Vettel over the team radio.

Vettel had little chance to pull out the necessary lead over Hamilton in the time remaining to negate the penalty; indeed, Hamilton seemed determined to pass Vettel on track to put the matter beyond all doubt. In the end that wasn't proved possible and Hamilton continued the Silver Arrows winning streak despite crossing the line in second place.

Leclerc ran a lonely third well ahead of Bottas, with Verstappen dropping back to fifth after making his super-late pit stop on lap 49. Ricciardo secured sixth and Hulkenberg defied his gearbox concerns to cross the line right behind him in seventh followed by Gasly, Stroll and Kvyat. 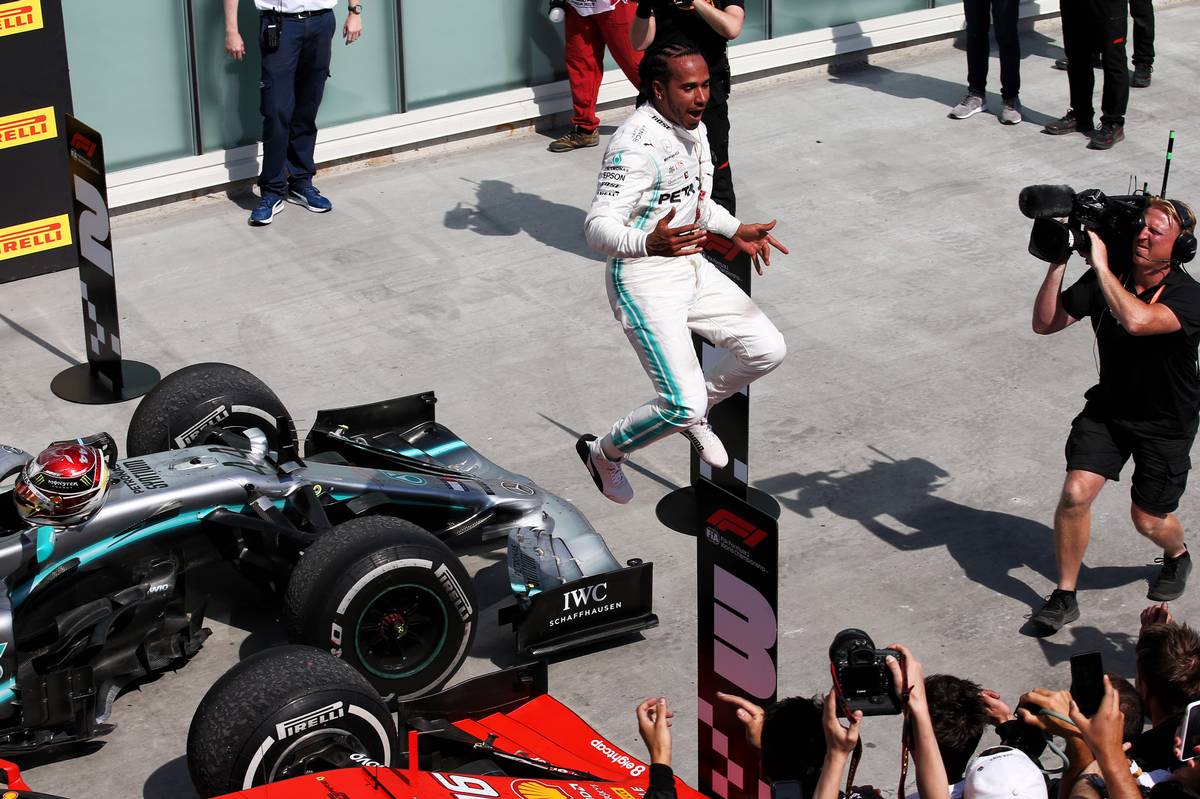 Outside the points were Sainz, Sergio Perez and Antonio Giovinazzi, who had survived a wild mid-race spin across the turn 2 chicane. Romain Grosjean was 14th for Haas ahead of Raikkonen, while George Russell crossed the line ahead of Kevin Magnussen who called his rebuilt VF-19 the worst car he had ever driven. Robert Kubica was the last man still running, with Albon a late retirement in pit lane with 11 laps to go.