Lewis Hamilton took pole position for the 2019 German Grand Prix on Saturday afternoon, fending off threats from Red Bull's Max Verstappen and from his own Mercedes team mate Valtteri Bottas.

However Ferrari's Sebastian Vettel will start from the back of the grid, after suffering a suspected turbo issue on his first outlap meaning that he failed to set a time in the session.

His team mate Charles Leclerc was also hit by fuel system issues in Q3, leaving him unable to take to the track for the final round which leaves him to start Sunday's race from tenth place. 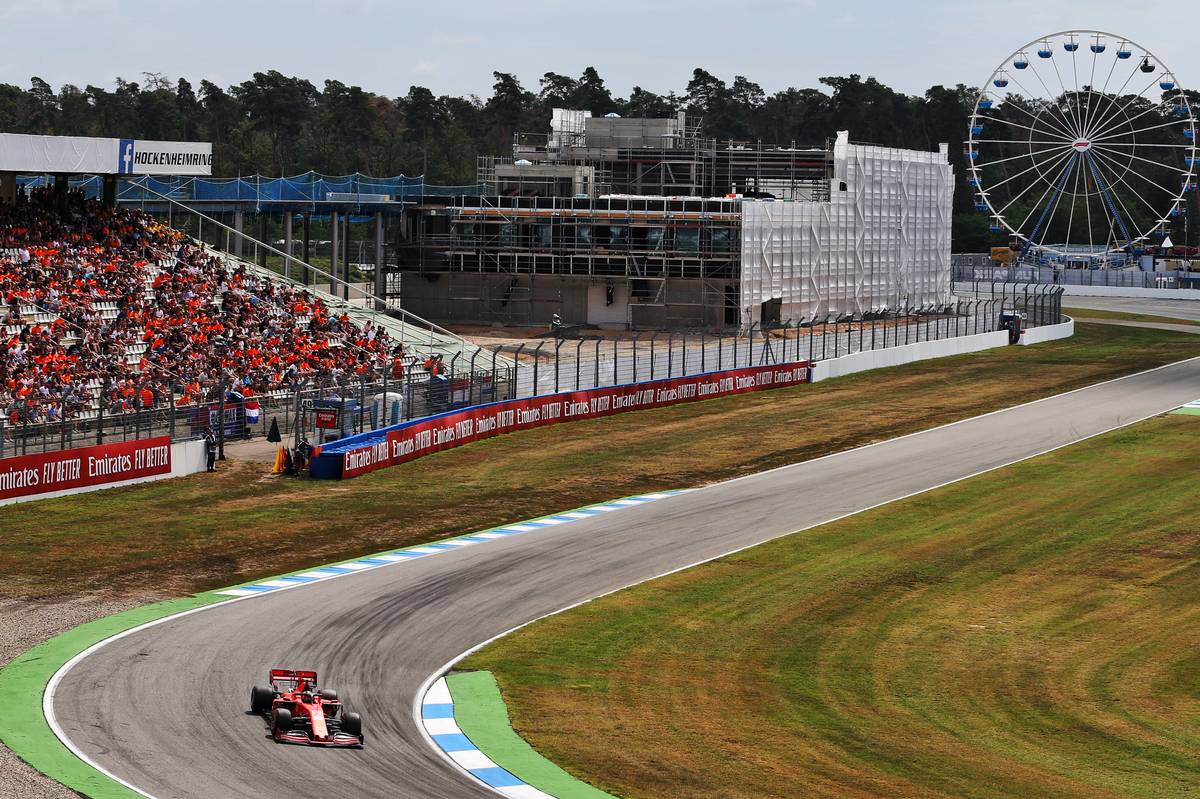 Conditions for qualifying at Hockenheim might have been significantly cooler than they had been 24 hours earlier for Friday's practice, but the expected rain had failed to materialise. The sun was even managing to successfully make inroads in breaking up the cloud cover over over the circuit, as the cars took to the track for the start of the session.

First out was Robert Kubica followed by his rookie team mate George Russell, Williams hopeful that their first significant upgrade of the season would help them start to cut the deficit to the rest of the field. Russell set the early pace with a time of 1:15.682s, over four tenths quicker than the Pole who subsequently became the first man of the afternoon to have a lap time deleted for exceeding track limits.

Racing Point's Lance Stroll immediately slashed two seconds off that benchmark with his first run of the afternoon, hoping to put an end to a run of 14 consecutive qualifying sessions in which he had been eliminated at the end of Q1.

Kimi Raikkonen went top with a time of 1:13.066s in the Alfa Romeo before the big dogs reported for duty. However it was not the most auspicious starts for local hero Sebastian Vettel, whose Ferrari suffered a loss of power on its out lap forcing him to return to pit lane before he could make a proper run where the engineers scrambled to find and fix the issue. It was soon clear that the suspected turbo issue issue was too deeply buried within the guts of the SF90, and Vettel eventually climbed out of the car without setting a time. 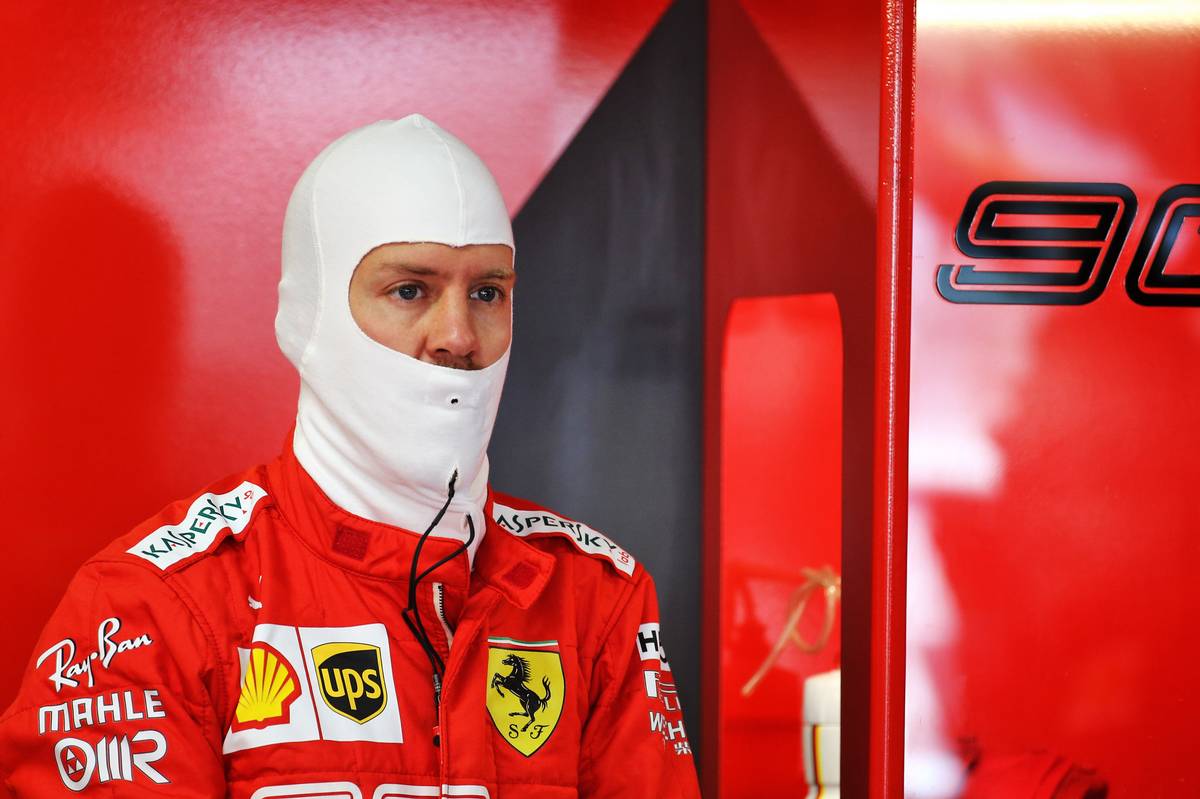 It was a more successful time for Vettel's team mate Charles Leclerc. He took up where he had left off in practice, going top with a time of 1:12.229s which was 0.364s off Red Bull's Max Verstappen. Mercedes' Valtteri Bottas was only able to go fourth fastest with his first push lap, while Lewis Hamilton ran wide in the first sector and abandoned his first run leaving him in danger of elimination. Keeping his cool, Hamilton's next push saw him up to third place, with Pierre Gasly also finding extra pace to put him up to fifth ahead of the two Finns.

With Vettel already consigned to one of the five elimination spots, and the two Williams car inevitably occupying two more, attention turned to who would be joining them in an early finish to the session. Surprisingly, McLaren's usually swift Lando Norris was at risk along with Toro Rosso's Alexander Albon and Antonio Giovinazzi in the second Alfa. In the end it was Giovinazzi who found the required pace to vault him to safety, while Albon's final effort was thwarted when he encountered came up behind Norris with the McLaren driver potentially facing a trip to the stewards for impeding. 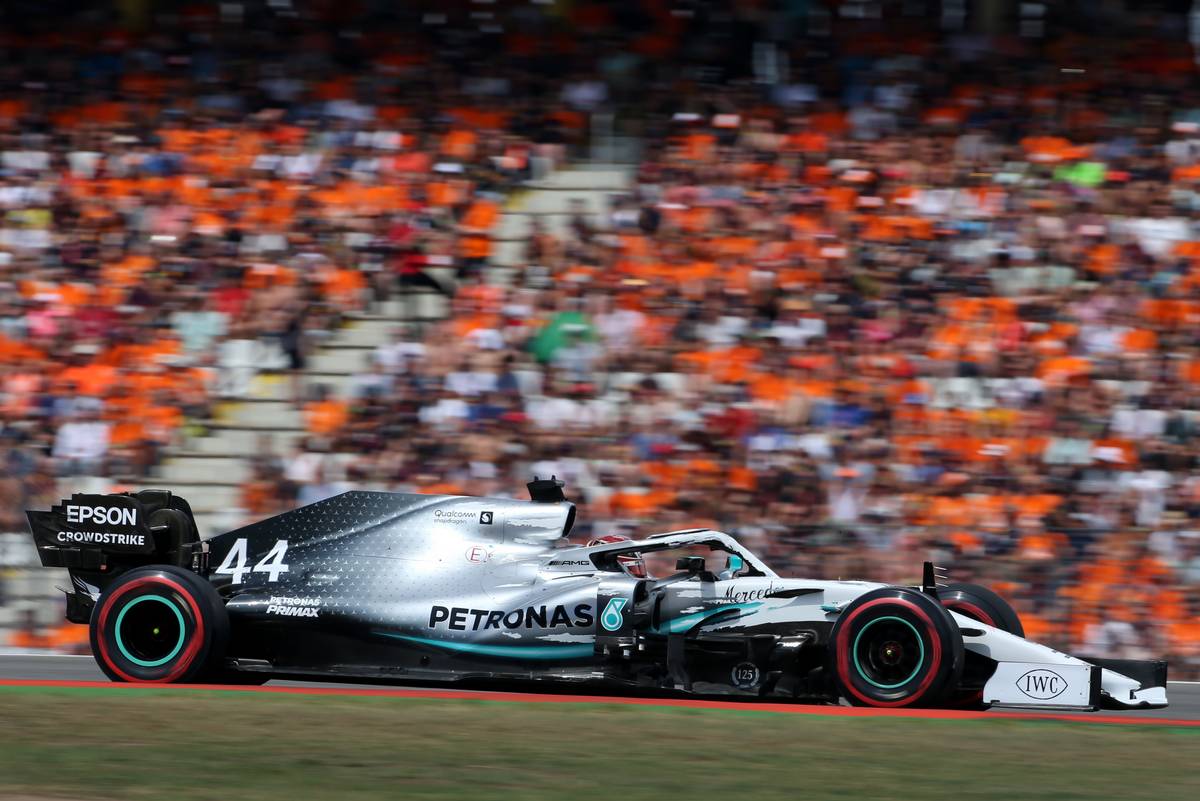 Hamilton and Bottas were first out for the second round, opting for medium tyres in a clear statement about which compound the team wanted to start Sunday's race on. Leclerc also made an early move, and the same tyre call.

Hamilton opened his account with a time of 1:12.149s which was 0.338s quicker than Bottas, while this time it was Leclerc who was forced to back off after running wide in the first sector. His second run saw him up to second place and comfortably assured of a place in the final top ten pole shoot-out round.

Verstappen was next up, but to the horror of his massed fans in the grandstands the Dutch driver reported a loss of power on the straight. It forced him to abandon the run and head for pit lane, in a worrying echo of Vettel's plight in the opening round.

In the interim, Gasly picked up the baton for Red Bull and went third fastest ahead of Bottas, McLaren's Carlos Sainz and the two Haas cars of Romain Grosjean and Kevin Magnussen, followed by Raikkonen, Giovinazzi and Racing Point's Sergio Perez.

After checking over the car, Red Bull ushered Verstappen out having opted for soft tyres in a safety-first strategy. Despite an ominously slow outlap and complaints about a turbo lag, the RB15 managed to pick up pace when it mattered and Verstappen reached safe ground in fourth place. That disposed Perez into the elimination zone along with his team mate Lance Stroll, the Renaults of Daniel Ricciardo and Nico Hulkenberg and Toro Rosso's Daniil Kvyat.

Raikkonen and Hulkenberg both found extra speed on their final run, while Perez also dug deep to recover tenth place. As a result, Giovinazzi and Magnussen were pushed out of progressing through to Q3, and instead forced to join Ricciardo, Kvyat and Stroll on the sidelines. 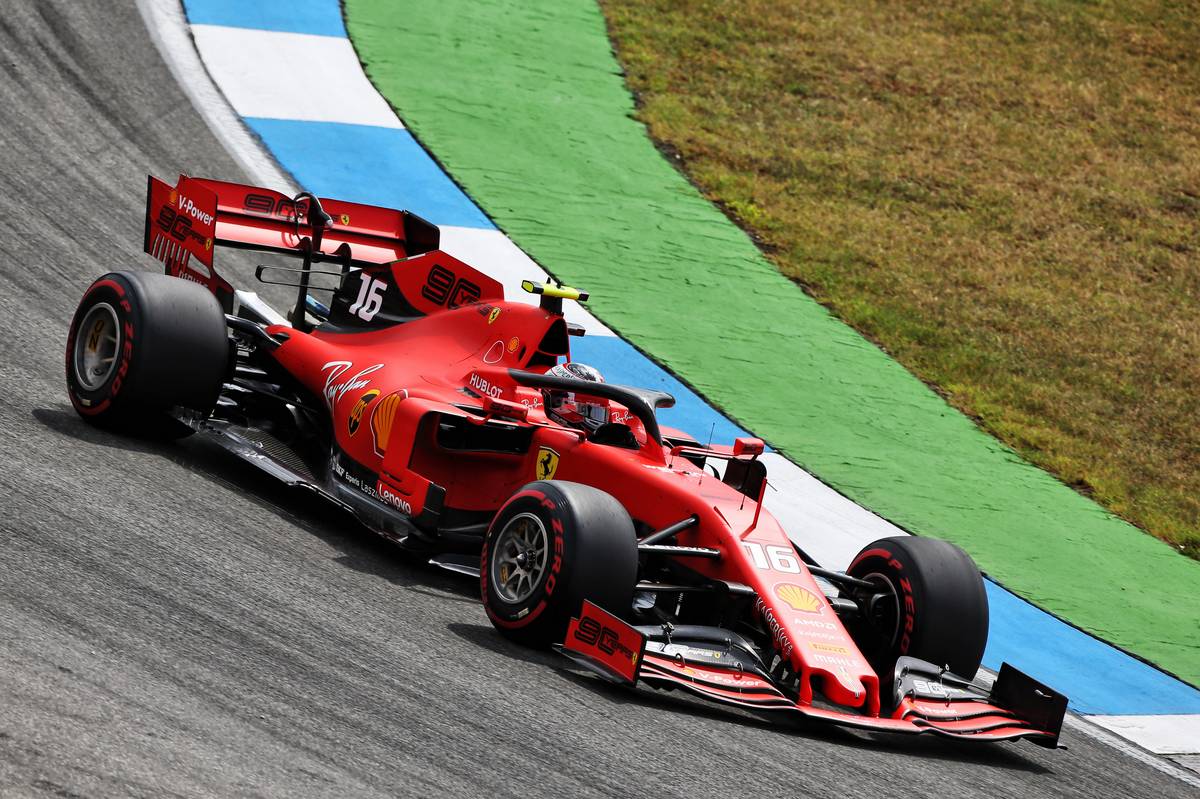 Q3: Hamilton hangs on to pole after more Ferrari woes for Leclerc

As teams started to stream out of pit lane for the start of Q3, there was more drama in the Ferrari garage when engineers were once again called to action, this time with a problem for Leclerc's car. Within minutes their worse fears were confirmed and the youngster was climbing out of the car without even turning a wheel in the final round, consigning him to a likely tenth place on the grid for the race.

That allowed Lewis Hamilton to set the pace with a lap of 1:11.767s, a third of a second faster than Verstappen. The Red Bull seemed to have rallied after its second round scare to go comfortably ahead of Bottas, Gasly, Grosjean, Perez and Sainz at the end of the first runs.

Gasly held on to fourth place despite having his fastest lap deleted for exceeding track limits, putting him ahead of Raikkonen, Grosjean, Sainz, Perez and Hulkenberg. 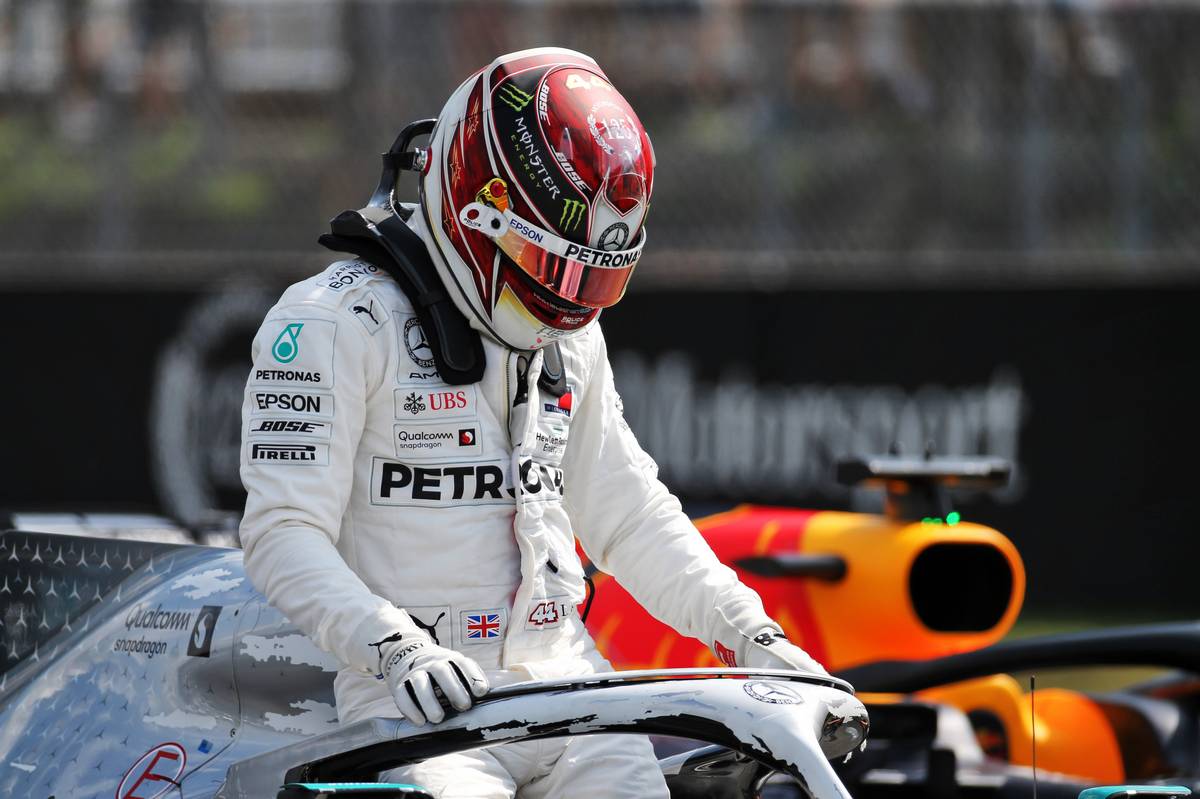