Sebastian Vettel pulled off one of his all-time best comeback drives, recovering from a back row start to finish in second place behind Max Verstappen.

The four-time world champion admitted that the wildly eventful and entertaining race had looked like it would never end at one point.

"It was a long race!" he told Sky Sports F1 co-commentator Martin Brindle after the finish.

"At some stage it felt never-ending. It was a lot of fun and it was very tough given the conditions, to read what was the smartest move. But I'm just happy."

Early in the race Vettel had appeared to be struggling, leading to fears that he was suffering from a recurrence of the turbo issue that had sidelined him from Saturday's qualifying session.

But Vettel said that hadn't been the case.

"It took a while," he explained. "I don't think it was a problem with [the turbo.]

"In the beginning with the intermediates I couldn't really get a handle on it. Eventually then I got going, so it was good that the afternoon took so long.

"Obviously I stayed tidy for most of the race. It was a long one, I don't think I can recap it all now!

"But congratulations to Max, I think he drove a great race."

It was quite late in the proceedings when Vettel realised that with a new set of intermediates, he had a chance to hunt down the cars in front and make a bid to get on the podium.

"Before the last safety I realised I was quite a bit quicker, and I was happy to pass people. It was quite straightforward and I could time it right.

"I saw a few people being cautious in the first corner while I was giving it everything.

"It worked to really to get into DRS and I had good moves down the back straight. But this race was so long!" 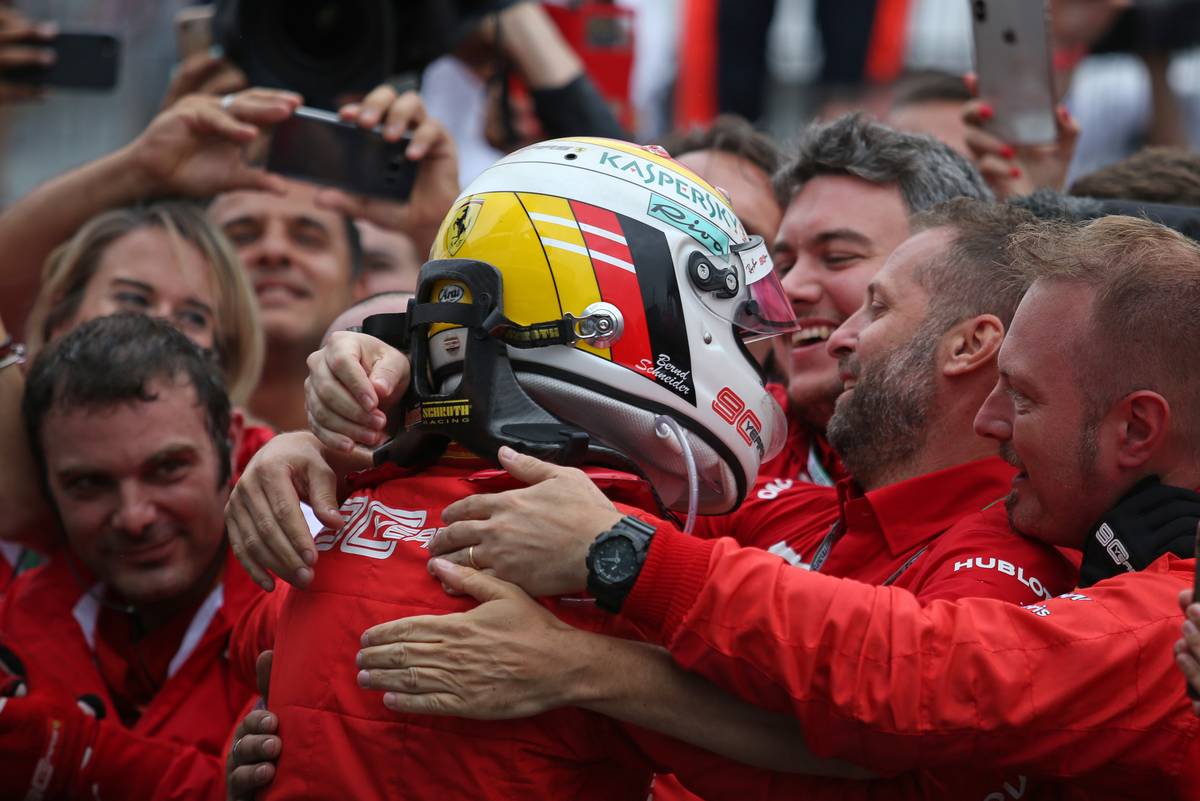 Today's race means that Vettel has caught up on title leader Lewis Hamilton by 18 points. But it's the psychological boost of his performance that will be even more important according to Ferrari team principal Mattia Binotto.

"We are very happy for Seb,” Binotto told Sky Sports F1. “I think it was important for him to have a good weekend here.

"It was very disappointing yesterday [in qualifying]. Starting from the back of the field, what he achieved, is certainly a good boost for him.

“He was happy on the podium. We are very happy for him, and I'm sure that will help him for the next races.”

Binotto acknowledged that today's success didn't diminish the need for the team to investigate the double failure they experiences with Vettel and Charles Leclerc in qualifying on Saturday.

“Certainly what happened for us, yesterday, was completely unexpected. So it was not problems we knew from past races.

“It's quite a shame when it is happening on a weekend when you know you can be strong," he added.

“On the positive, the car performed well on the track. The negative was the problem we had yesterday. We need to work on that.”

Kvyat: Run to podium was 'horror movie with black comedy'