At one point, Sunday's German Grand Prix looked like it might finally be the race in which Nico Hulkenberg could finally finish on the podium after 167 race starts. Unfortunately it wasn't to be for the 31-year-old local hero.

Hulkenberg was one of the few drivers not to succumb to the temptation of slick tyres at a key stage of the eventful race. Instead he remained on intermediates, and when the rain picked up again and everyone else dived back into pit lane it meant he found himself up in second place.

Although he was quickly overtaken by the two Mercedes cars of Valtteri Bottas and Lewis Hamilton, Hulkenberg still looked on course for at least a fourth place finish - until the R.S.19 went off the track in the final corner on lap 40.

"It's a tough one to take," the German driver admitted. "I'm upset for myself, the team and for Renault because they deserved an excellent result today.

"It's one of those days where you have to make it stick, and I'm just gutted with how it ended especially in front of the home crowd.

"The final corner was very tricky as it was damp," he explained. "I lost the rear a bit, went into a spin so I opened the steering and went onto the black tarmac. It was like ice there, and by that point I couldn't stop the car.

"We were doing a phenomenal job, strategy was very difficult so it hurts and it will hurt even more tomorrow."

His team mate Daniel Ricciardo had an even shorter day of it, retiring on lap 14 with an engine-related issue.

"We had an exhaust failure today, which caused the retirement the Australian explained later. "I could see a lot of smoke coming out from the back of the car and that was our day done.

"It's certainly a shame. I watched the rest of the race and it looked a lot of fun out there. I would have loved to have been racing as there were opportunities for big points.

"It's disappointing but we'll move on to next week. It's a tough overall result for the team, but hopefully Hungary will be better for us." 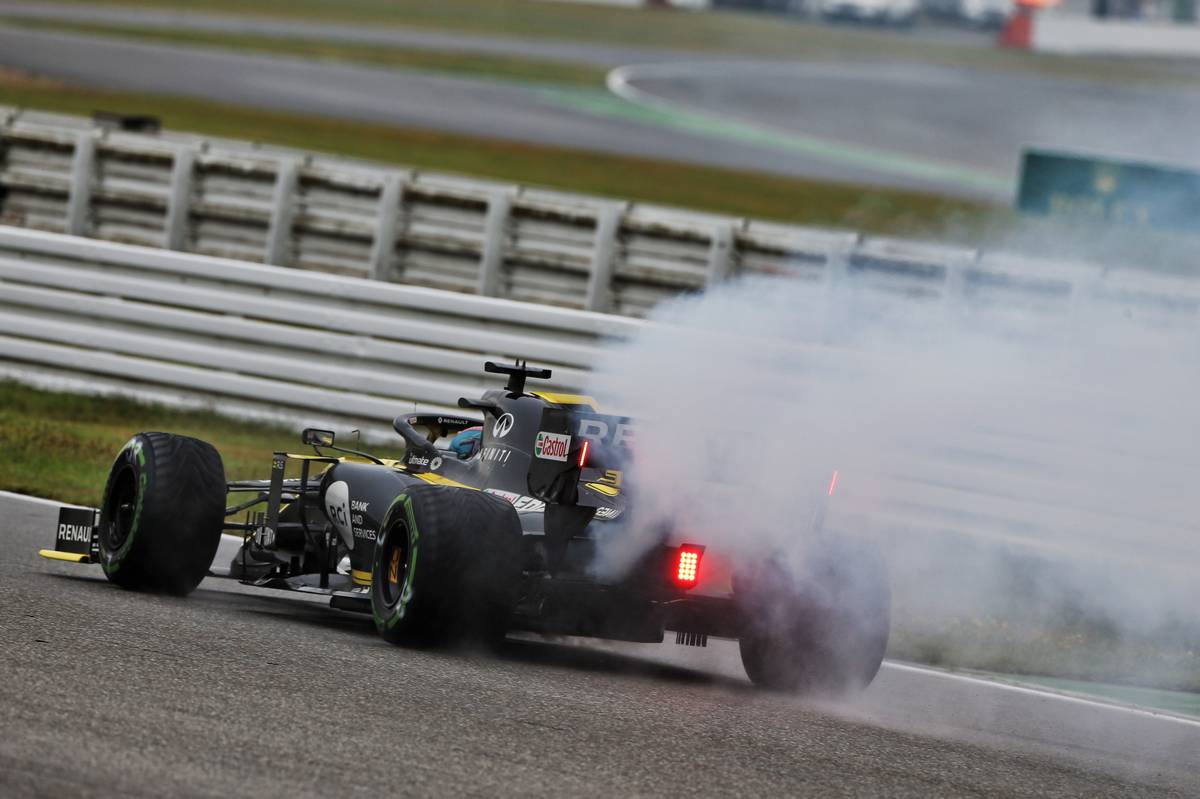 Team principal Cyril Abiteboul admitted that it had been a day of high emotions for everyone at Renault.

"It was an emotional rollercoaster today with highs and lows. Unfortunately, we're finishing on a low with two retirements.

"Daniel's was caused by an exhaust leak and we need to look into the problem, which is our first reliability glitch in a while.

"Nico had been driving an amazing race and was supported by decisions from the pit wall and good execution by the pit crew. We made the call not to put dry tyres on too early and made up a lot of positions to second.

"The final corner looked tricky all day and Nico could not save the car from the wall. It's difficult to take as it was an exciting race and we'd have liked to have been part of it until the end.

"We missed an opportunity for big points over our direct competitors, but there are certainly positives from the weekend," he insisted.

"We want to taste being higher on merit more regularly. It doesn't deter from our focus of pushing on and building a more competitive car."