Valtteri Bottas said that he tried everything he could to find a way past Charles Leclerc and secure victory for Mercedes in the closing laps of Sunday's Italian Grand Prix at Monza.

Bottas started the race from third place behind Leclerc and his own team mate Lewis Hamilton. He opted for a longer first stint on soft tyres which meant he inherited the lead on lap 20 when the others made their pit stops.

He was in front for eight laps before his own stop, meaning he had fresher tyres than either Leclerc or Hamilton for the second half of the race. It allowed him to catch and pass his team mate, but it was another matter when it came to dispatching the Ferrari.

“I think we had a good strategy," the Finn told Sky Sports F1 after the finish. "I could go pretty long in the first stint and that opened up some opportunities at the end, which was always the plan.

"Personally I was doing everything I could for the win," he continued. "I was trying to. It was possible, and it was the only thing I was aiming for today. Especially being in that position.

"The pace was good enough, especially in the second stint," he said. "But I just couldn't do anything. I tried everything I could. Always when I got close I struggled more in the corners.

"There was no way past. Always when I was getting close enough I started front locking because of the lack of downforce.

"Under braking for sure when you get really close you're starting to lose quite a bit of load from the front, from the axle," he explained.

"I was also getting issues with front brakes locking up, for getting so close to the car ahead so I was pushing hard.

"It's easy to have lock-ups and small mistakes here and there because you're sliding a bit more in the corners with the lack of downforce.

“It was really difficult. We tried everything we could, with the engine modes and everything, but not quite enough.

"The thing is when we had the DRS open then we are the same speed as them, so without the DRS there was no way to overtake."

It was suggested that the Ferrari was quicker out of the corners than the Mercedes all afternoon, but Bottas didn't think that this had been a particularly significant factor in how the race had turned out. 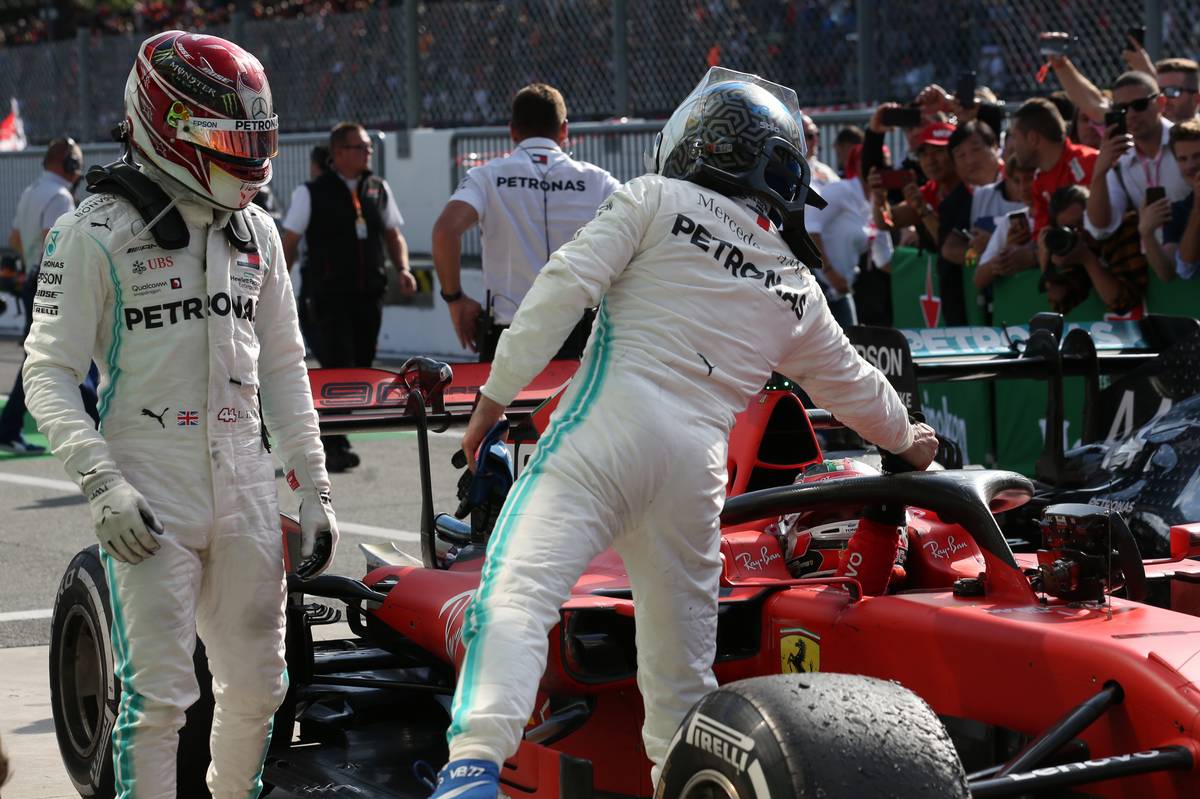 "Not sure that was really the biggest thing," he said. "Just straight line speed in general is the weakness for us in corners in general.

“I'm gutted," he added after missing out on his best chance of picking up a win since his victories in Australia and Baku earlier in the season.

"It’s annoying because it’s so close, finishing less than one second. But at least I tried everything I could.

"What can I say?," he sighed. "I was just not good enough. But otherwise it was a good race, good fun and I really enjoyed it, fighting for the win.

Bottas does have the small consolation of closing on his team mate Lewis Hamilton on the drivers championship. The pair are currently first and second with seven races remaining on the 2019 calendar.

But by finishing in second place Bottas has only reeled in Hamilton by a total of two points, with the Briton adding a bonus point for the fastest lap to the total he picked up for crossing the line in third place.

It means that Hamilton is now on a total of 284 points, 63 points more than Bottas who has consolidated his advantage over Red Bull's Max Verstappen this weekend.