Sebastian Vettel claimed his first win in over a year with victory in the 2019 Singapore Grand Prix, after an early pit stop enabled him to get the jump on his Ferrari team mate Charles Leclerc.

Leclerc - who had been on course for a hat-trick of wins - was audibly less than happy with the team strategy as he promised not to do "anything stupid" to upset the Ferrari 1-2 in the closing laps.

Williams lost its 100 per cent finishing record after George Russell was hustled into the wall by Haas' Romain Grosjean to trigger the first of three safety car periods during the race. 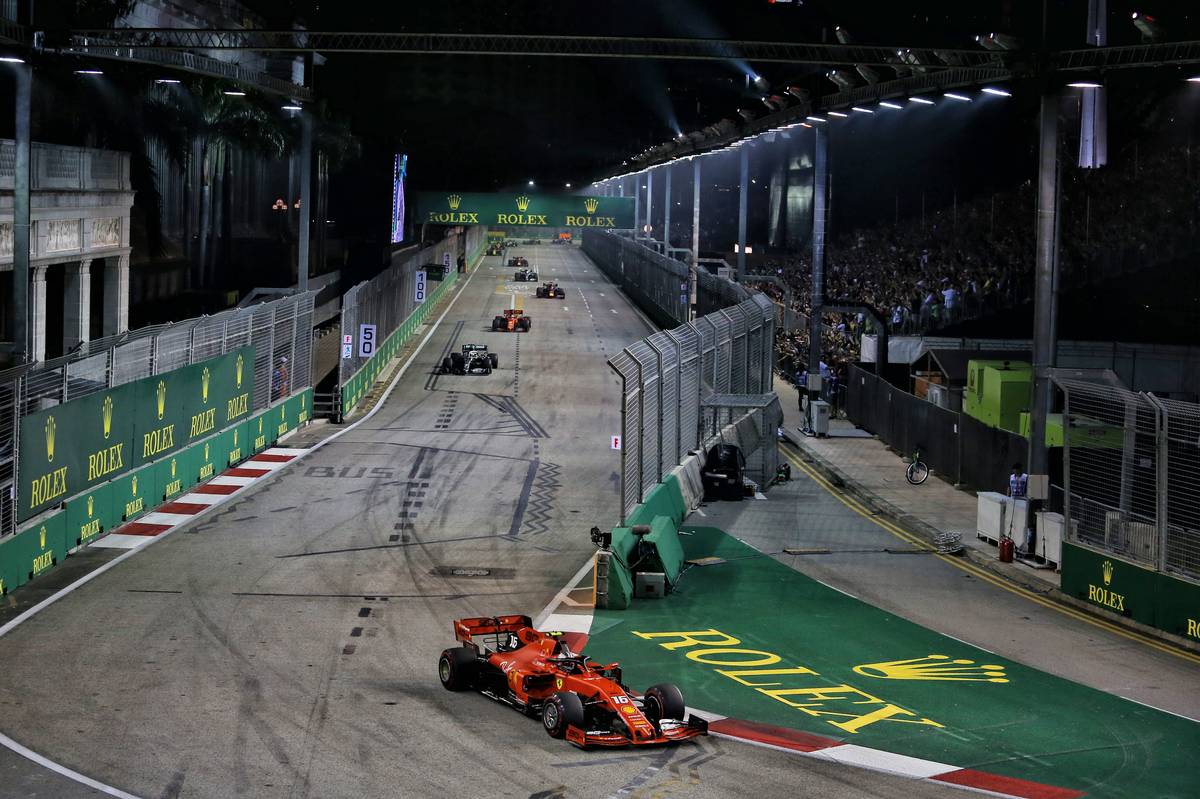 The Singapore spotlight was very much on Formula 1's newest superstar Charles Leclerc as he lined up on pole position for the third consecutive time in 2019, following his stunning lap in qualifying the previous day. Next to the Ferrari was Lewis Hamilton, with Sebastian Vettel and Max Verstappen taking up their places on the second row in time for the start of F1's only true night race.

Leclerc got off to a confident start, launching away from the grid and leaving Hamilton scrambling to fend off Vettel to cling on to second place. Verstappen was also able to hold off Valtteri Bottas for fourth as the leaders went through the opening turns without significant incident.

However there were problems further back, with Carlos Sainz making contact with Nico Hulkenberg forcing both drivers to make emergency pit stops. Dire problems with the right-rear of the MCL34 as the McLaren pit crew struggled to fit new hard tyres kept Sainz stationary for 70 seconds, and meant he was already a lap down by the time he rejoined the race. Also making an unscheduled early stop was George Russell, who needed a new front wing on the Williams after being squeezed between his team mate Robert Kubica and the out-of-place Renault of Daniel Ricciardo at the back of the field. 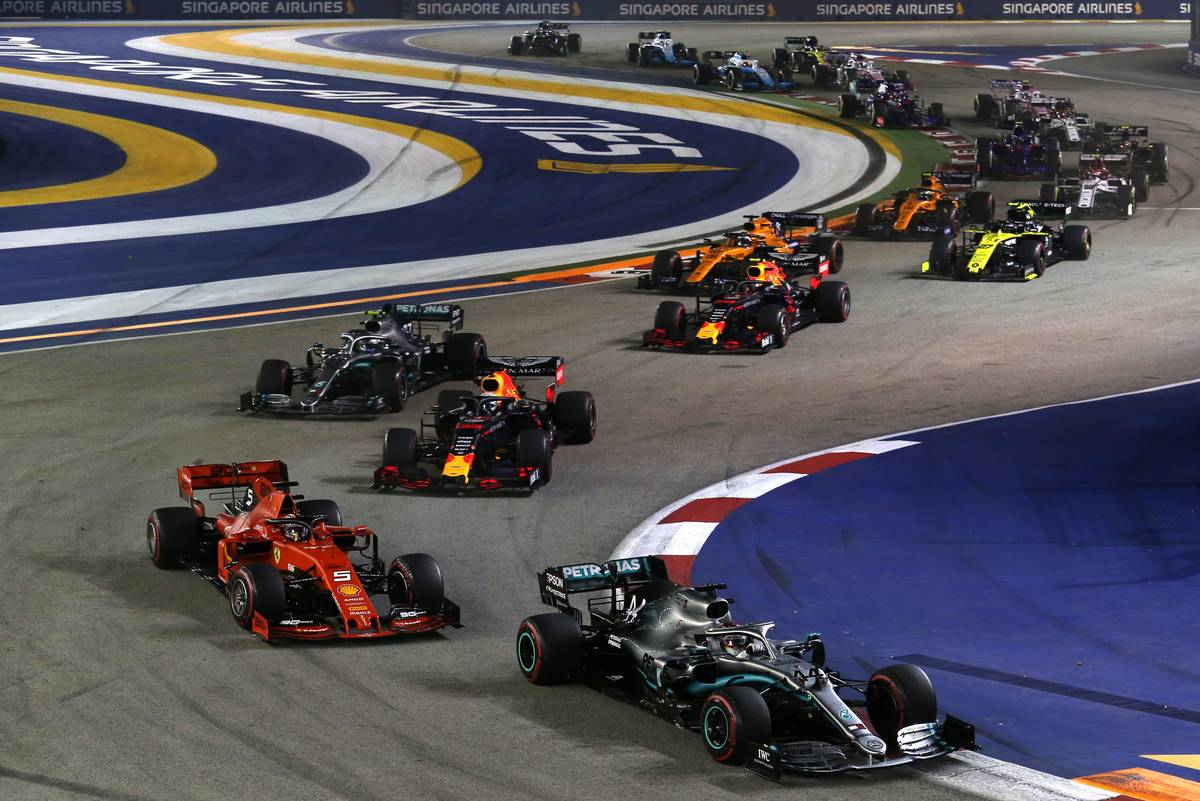 Crucially the incidents did not give rise to an early safety car, which is typically a factor at Singapore. Leclerc had initially threatened to scamper away at the front, but tyre management concerns on the soft compound now reigned him back in and allowed Hamilton to close up and remain within a second of the race leader. Vettel, Verstappen and Bottas were divided up by similar margins, followed by Alexander Albon in sixth ahead of Lando Norris, with just eight seconds covering the top seven. The remainder of the top ten was taken up by Alfa Romeo's Antonio Giovinazzi, Haas' Kevin Magnussen and Toro Rosso's Pierre Gasly.

The one driver not worrying about tyre wear was Ricciardo. Undaunted by his early clash with Russell, he was the man on the move in the opening laps. Having already dispatched the likes of Haas' Romain Grosjean and Racing Point pair Sergio Perez and Lance Stroll, on lap 10 he emphatically dispatched Toro Rosso's Daniil Kvyat for 12th place down the inside of turn 4. Stroll followed him through in the same move, and moments later Perez was also able to muscle his way past Kvyat in what had proved to be a rotten few laps for the Russian who had clipped the wall during his futile defence. Unsurprisingly in the circumstances, Kvyat immediately opted to make his pit stop to change to hard tyres, forcing Perez to do likewise on the next lap in response in order to cover off the chance of an undercut.

Lap 15 saw Leclerc cleared by the Ferrari pit wall to pick up speed again. He immediately went a second faster, with Hamilton attempting to go with him despite reporting that his tyres were starting to drop off in performance. Vettel, Verstappen, Bottas and Albon made no move to match the increased pace of the leading duo, preferring to nurse their tyres and wait for an opportunity to come their way later in the race. First among them on pit stops to blink was Vettel on lap 20, with Verstappen hot on his heels into pit lane. Both drivers switched to the hard tyre to see out the rest of the race, a superfast stop working well for Vettel who rejoined in tenth place while Verstappen was less fortunate and emerged in 12th just behind Hulkenberg. Next time round it was Leclerc who pitted from the lead, while Hamilton was told to 'box opposite' to the Ferrari - meaning that he stayed out. 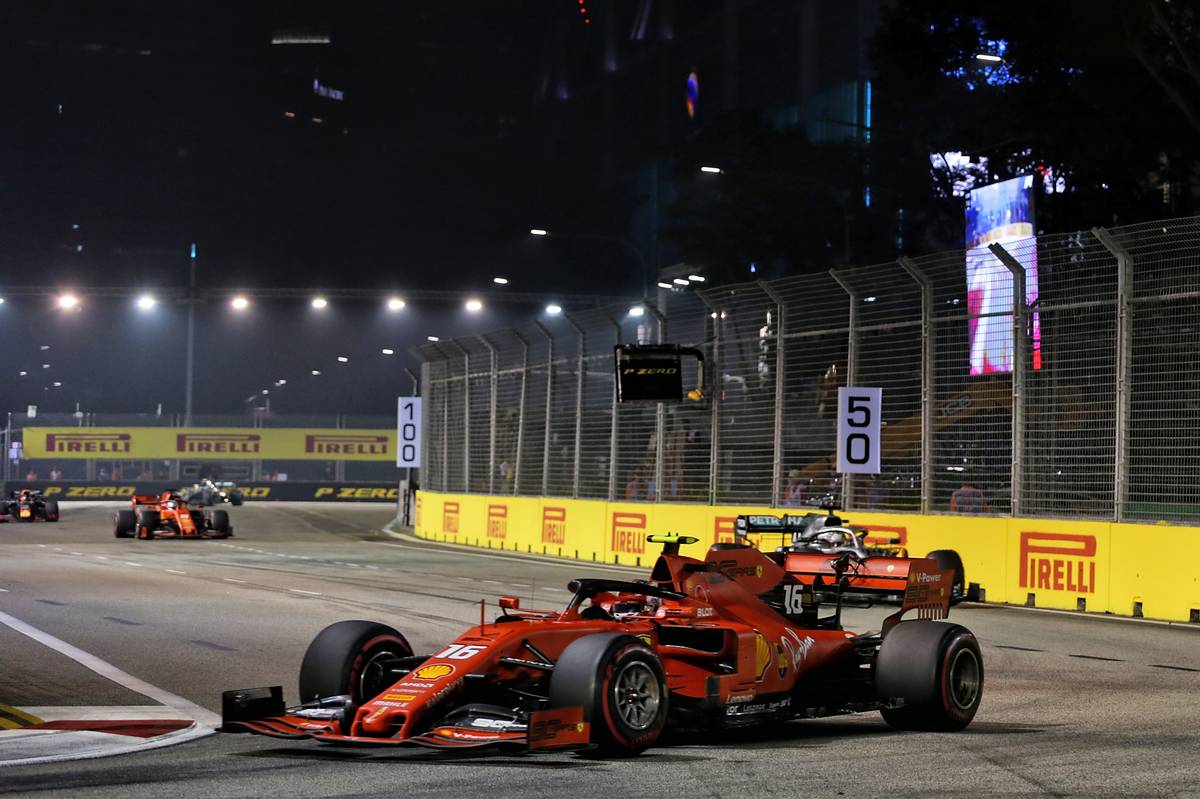 It partially backfired for Leclerc who came back out staring at the back of his team mate, causing him to exclaim "What the hell?" as it appeared Vettel had been given priority status in the strategy call. It turned out to be far worse for Hamilton: the rest of the front runners soon made their stops, but Mercedes decided to keep Hamilton out in the lead despite the fact that he was now running over a second slower than those who had already switched to fresh tyres. Mercedes then tried to use Bottas to create a gap for Hamilton to drop into, so that when he did finally stop on lap 26 he duly came back out just ahead of the Finn - but now in a net fourth place.

That didn't include the top four drivers on track who were Giovinazzi, Gasly, Ricciardo and Stroll, all of whom had started the race on hard tyres and were yet to make their stops. Mercedes were relying on this increasingly sluggish traffic holding up Vettel, Leclerc and Verstappen. It took some time but Vettel was eventually able to get around Stroll and Ricciardo, while his pass for second place on Gasly saw wheel-to-wheel contact at turn 7 that sent the Toro Rosso briefly off-track. Fortunately no damage was done to either car and the stewards decided there was no reason to investigate the clash.

There was no such drama when Vettel made his move on Giovinazzi down the straight to take the lead for the first time on lap 31, now holding a five second lead over Leclerc who was still threading his way through the traffic with Verstappen right on his rear wing. Hamilton and Bottas had made little progress and were still trailing Ricciardo, but Stroll and Gasly soon exited the picture to make their deferred pit stops. Ricciardo then sustained a puncture when trying to find a way past the waning Giovinazzi which cleared things up further, with Vettel now leading Leclerc and Verstappen while Hamilton was 14s behind followed by Bottas, Albon, Hulkenberg, Norris, Magnussen and Raikkonen. However without a safety car there seemed little left that Mercedes could do to salvage a deteriorating situation. 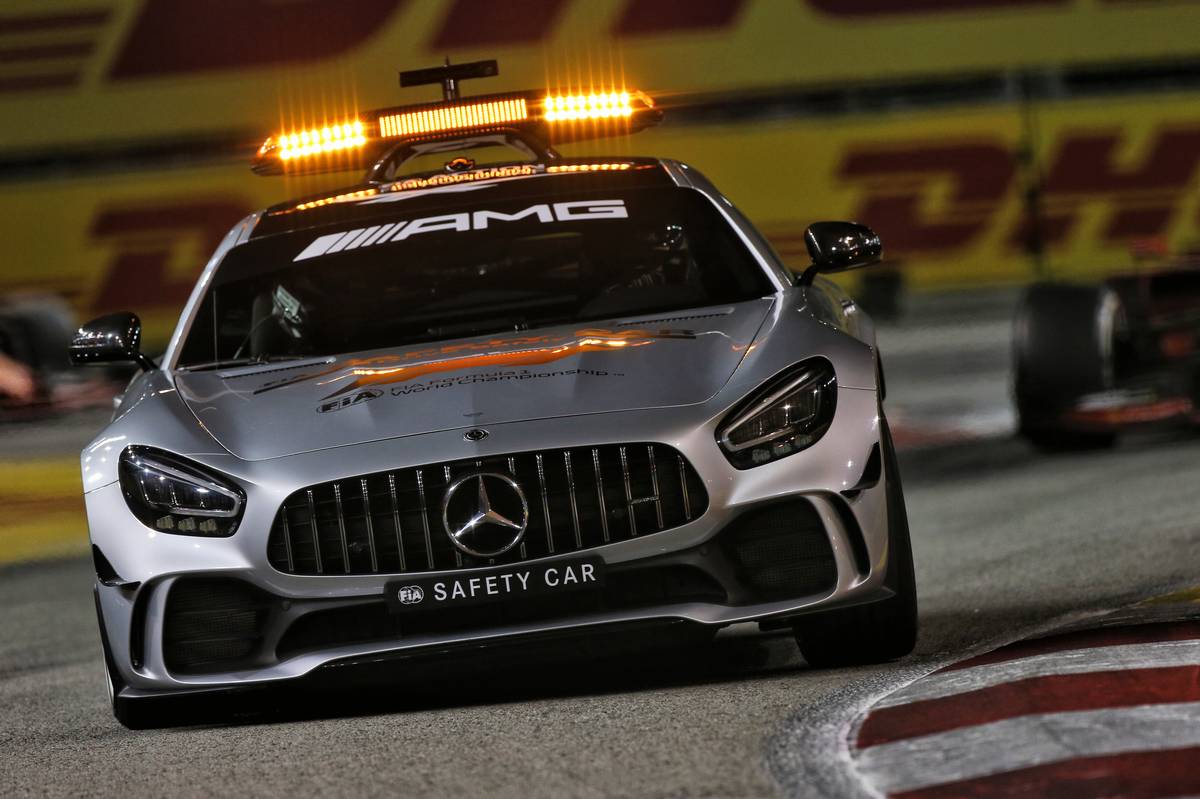 And then on lap 36, a safety car was indeed scrambled after Williams' George Russell went into the wall exiting turn 8 after tangling with Grosjean. Opting for track position over fresh tyres, the front runners passed up the opportunity to pit under the caution, but now everyone had closed up - and Hamilton was seemingly the driver with the advantage of fresher tyres as the race restarted on lap 41.

Vettel and Leclerc quickly broke away to safety at the front with Verstappen attempting to stay in touch, but the two Mercedes cars seemed unable to find the same pace. Further back, Stroll tangled with Gasly and then clipped the wall at turn 17 to puncture the left front of the Racing Point; two laps later his team mate Sergio Perez was also in trouble, crawling to a halt on the long straight into turn 14 with apparent mechanical issues. Recovery of the stricken RP19 necessitated a reprise appearance from the safety car on lap 44.

Before the restart on lap 48, Ferrari used the intermission to give Leclerc what amounted to team orders: "Charles, We need to manage the bring the car home," the pit wall decreed, adding "We need to manage the PU and bring the car home". Leclerc responded that "I won’t do anything stupid, it’s not my goal" but made his displeasure clear by stating: "I want us to finish one-two, I just think it’s not fair. This won’t change, I won’t be stupid."

Demonstrating the old mantra that cautions breed cautions, there was a further safety car on lap 50 after Kvyat pressed too hard seeking 12th place and ran into Raikkonen at the first corner, wrecking the Alfa's front suspension. Despite the additional delay to proceedings, the race was narrowly able to complete the full 61-lap race distance before the two hour time rule kicked in. 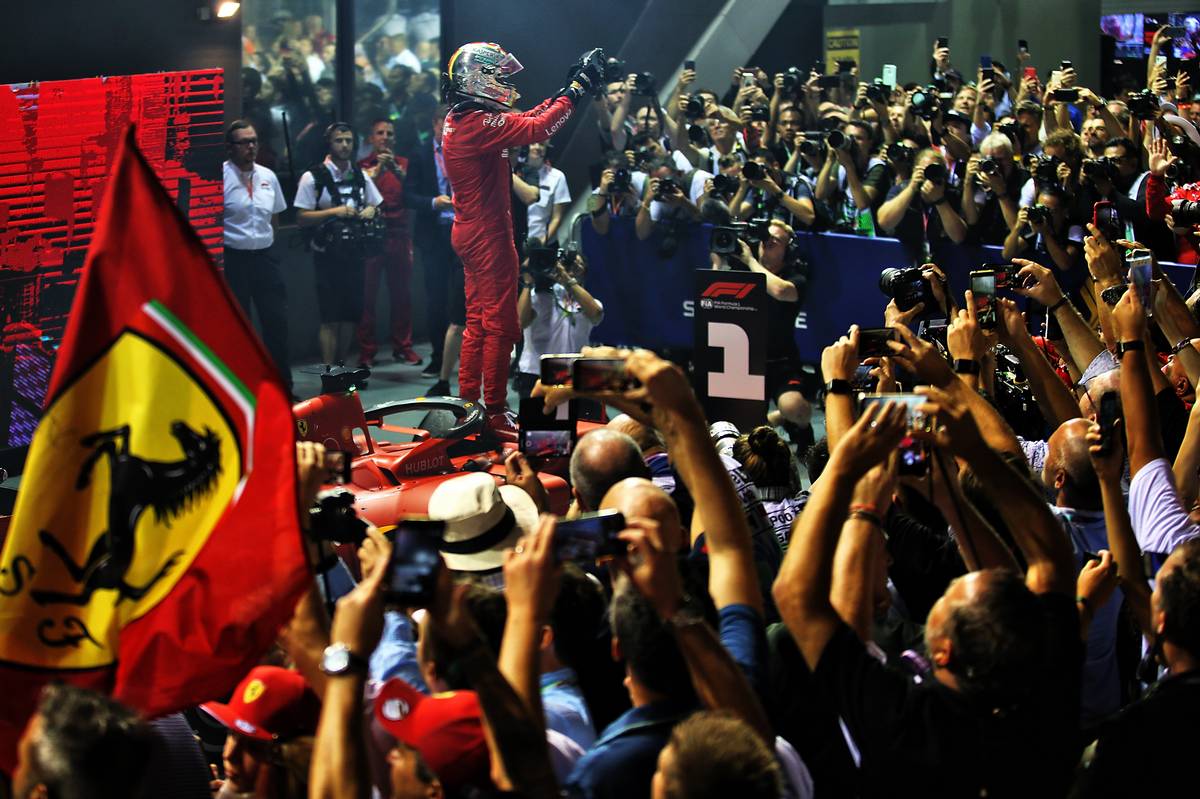 Vettel and Leclerc duly led to the finish, with Verstappen holding on to the final podium place ahead of Hamilton, Bottas, Albon and Norris. However there were a series of pitched battles further back now that everyone was running so closely, Gasly ultimately proving able to pick up eighth ahead of Hulkenberg and Giovinazzi.

Just missing out on points was Grosjean followed by Sainz, Stroll, Ricciardo, Kvyat and Kubica, with Kevin Magnussen the last man still running on track at the chequered flag after making an extra late pit stop.

Hamilton: 'We need to stop dragging our feet!'