Joining him on the front row of the grid this afternoon will be his Ferrari team mate Charles Leclerc, who was unable to extend his run of four back-to-back poles this weekend.

Mercedes missed out on the front row for the first time in the hybrid engine era. Valtteri Bottas will start from third place with Lewis Hamilton alongside him in fourth. 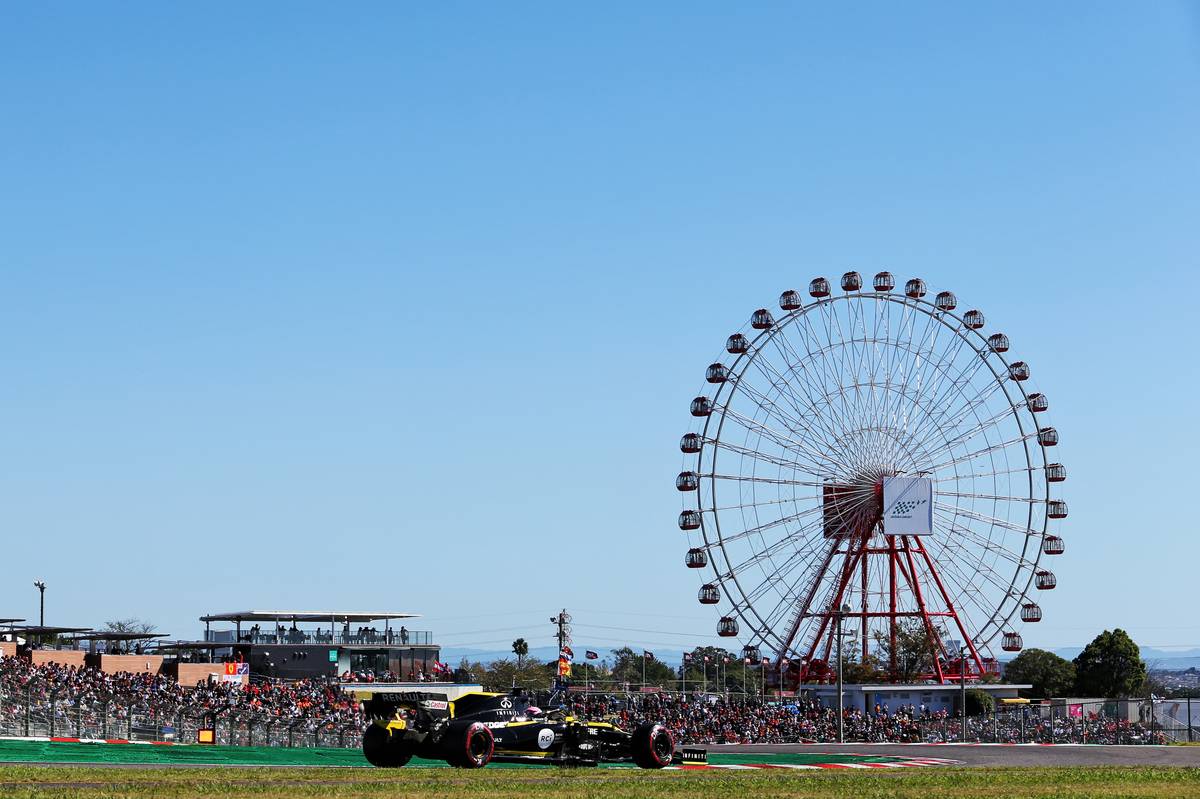 After the typhoon the previous day, Sunday at Suzuka turned out to be gloriously dry, bright and sunny - although the gusty high winds and the 'green' state of the thoroughly washed and rinsed track remained concerns for everyone as the teams reconvened.

Benevolent blue skies were presiding overhead as the teams prepared for only the fifth Sunday qualifying in the history of Formula 1, the fans having queued at the gates since 5am to be ready to see their heroes get to work after the enforced day off.

Q1: Ricciardo and Perez eliminated after red flags for Kubica and Magnussen

As if proving that this was no normal qualifying, the first cars to head out were not the two Williams as is usually the case, but rather the Ferrari pair of Charles Leclerc and Sebastian Vettel, followed by McLaren's Carlos Sainz. All were on hard tyres, indicating they were set for a shakedown tour rather than an immediate full-on qualifying effort. 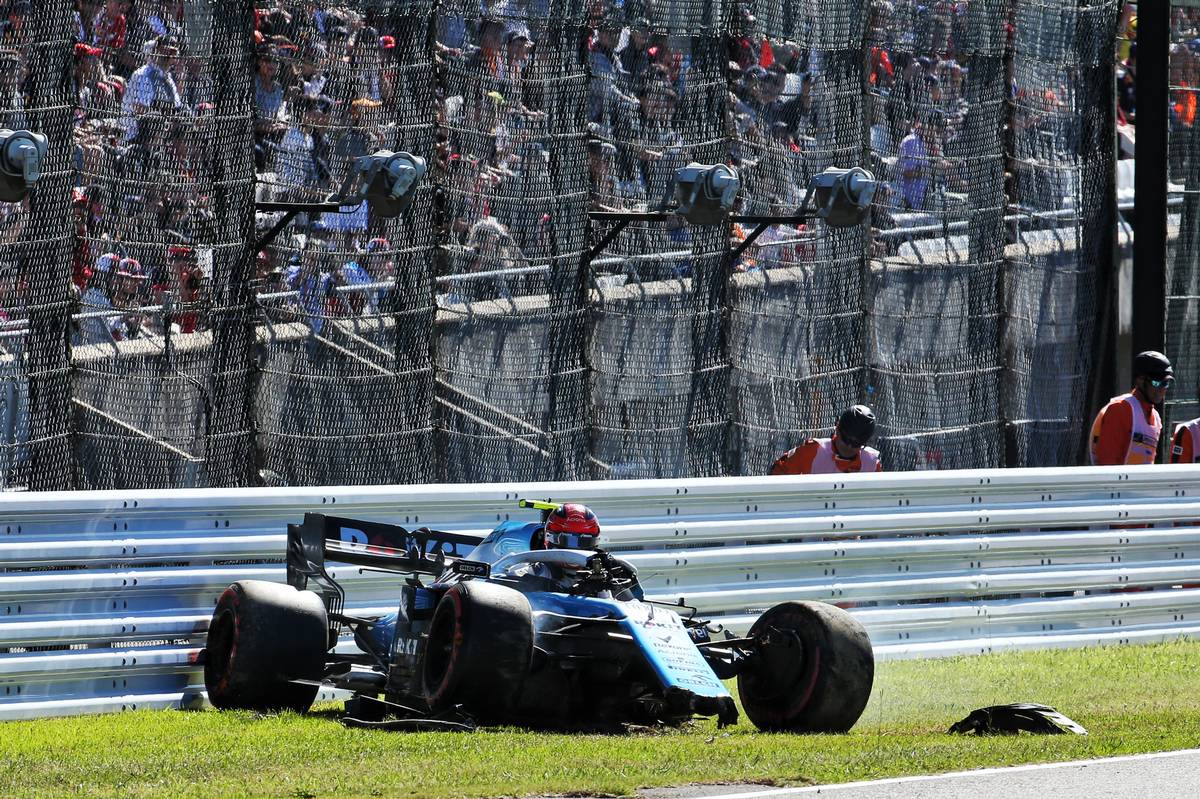 Williams' Robert Kubica soon joined them, but his involvement in the session was brief: he ran wide at the final corner, putting him onto the wet grass and into the tyre barrier. As well as triggering a red flag while the FW42 was recovered, it also gave the team mechanics the immediate headache of having very limited time to effect repairs to the crumpled car before the afternoon race.

The session resumed, with Alfa Romeo pair Kimi Raikkonen and Antonio Giovinazzi leading a pack of cars out as soon as the green light came on at the end of pit lane. Raikkonen duly logged the first time of the day but his 1:31.331s was substantially bettered by that his team mate by over three quarters of a second, before Toro Rosso pair Pierre Gasly and Daniil Kvyat took over at the top.

However the fun was once again curtailed, this time due to Kevin Magnussen spinning into the wall at a slightly earlier point than Kubica's earlier accident. The Dane was able to get the Haas back underway, although pieces of carbon fibre were dropping off the damaged VF-19 as he limped back to pit lane under a second red flag in order to give the team the maximum time available to assess the damage and begin repairs. 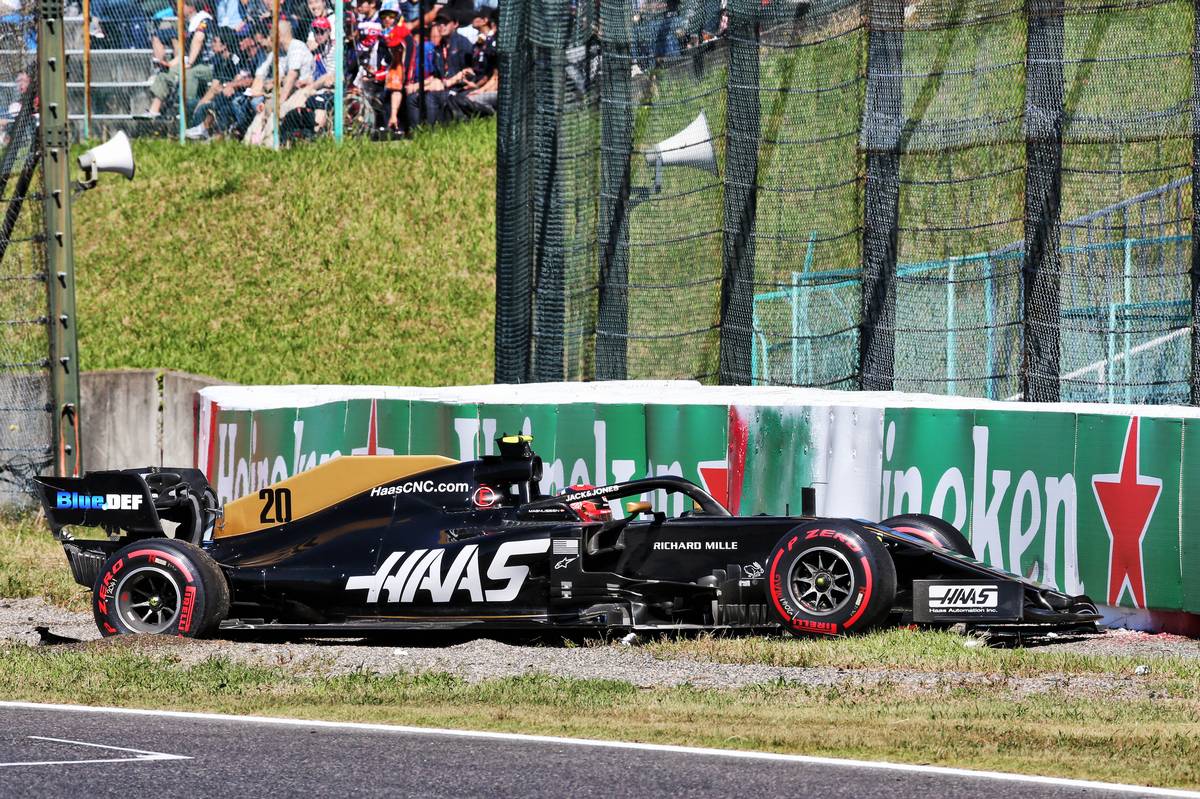 Only seven drivers had set times up to this point, with just under 12 minutes left on the clock as Q1 resumed. Almost all of the remaining 18 drivers were queuing in pit lane to get out with soft tyres the unanimous choice, but traffic was an immediate factor as the cars jockeyed for position to start their push laps.

Leclerc was the winner of this first duel of the day, going top with a time of 1:28.405s which put him three and a half tenths ahead of Red Bull's Max Verstappen. Vettel clocked in to third position ahead of Sainz, with Alexander Albon proving faster than both Valtteri Bottas and Lewis Hamilton. The track was clearly starting to 'rubber in' and get faster with each successive lap, Hamilton jumping to second with his follow-up lap and Bottas also soon safely up to fourth.

With Kubica and Magnussen already eliminated, the three drivers now at risk of missing the cut were Raikkonen, Lance Stroll, and George Russell in the sole remaining Williams. Raikkonen and Stroll were able to find much better times before the chequered flag, but their efforts ended up demoting Renault's Daniel Ricciardo and Stroll's Racing Point team mate Sergio Perez into the final drop zone alongside Russell. 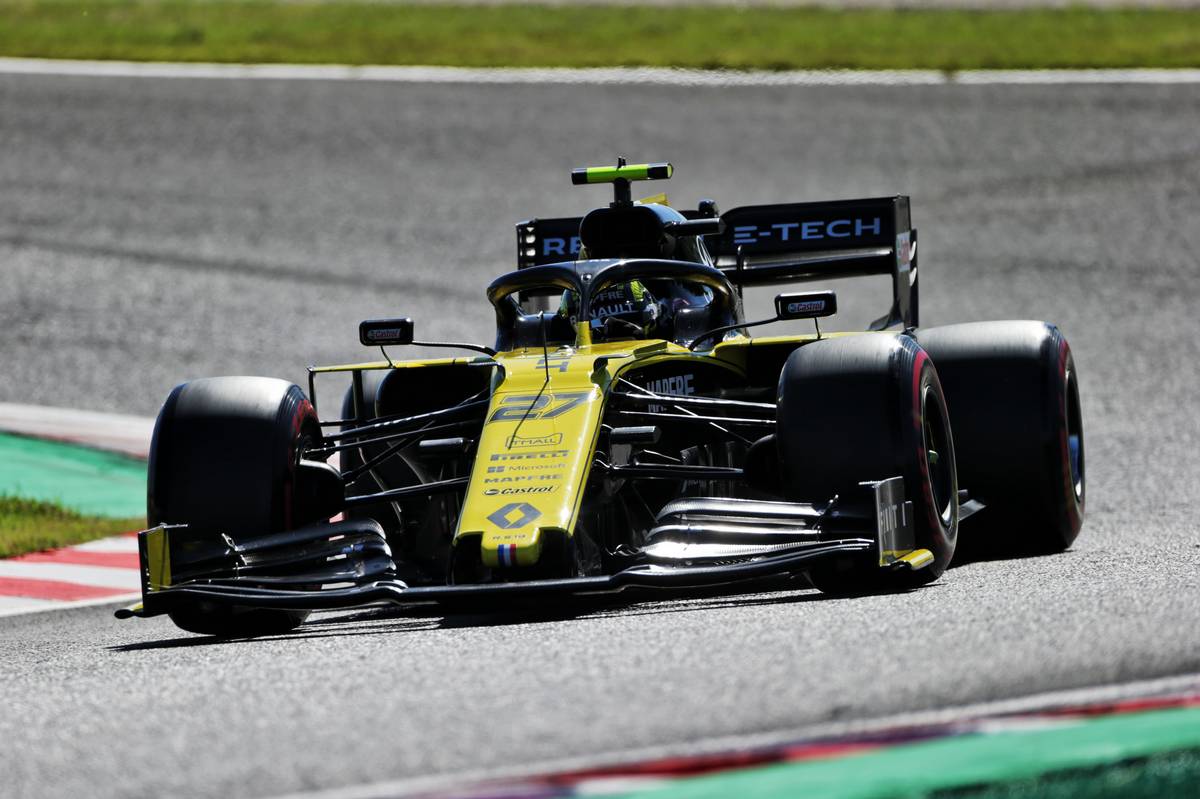 With the first test of the day out of the way, now attention turned to tyre choice for Q2, which - for the top ten at least - would determine their starting compound for the race itself. The two Ferraris were first out with everyone soon joining them, and it was immediately clear that the soft option was the unanimous choice for all concerned.

Despite complaining of cold tyres, Leclerc opened the times with a lap of 1:28.179s, but Vettel pipped him by five thousandths of a second to go top. Hamilton was better than both of them with a time of 1:27.826s, while Bottas was only fourth quickest which put him ahead of Verstappen, who had complained of a lack of power down the back straight in the Red Bull. His team mate Albon was just slower in sixth followed by Sainz, Raikkonen, Lando Norris and Romain Grosjean.

With the first Q2 runs completed without incident, teams quickly turned things around in pit lane and all the cars - with the exception of the two Ferraris - were soon back out for their second run. Grosjean was briefly demoted from the top ten by an improved lap from Stroll, but seconds later Grosjean was back in at the expense of Raikkonen.

Both Mercedes drivers returned to action, Bottas taking the Q2 honours with 1:27.688s ahead of Hamilton while Albon was able to nip ahead of Vettel and Leclerc with Verstappen sixth ahead of Norris and Sainz. Gasly also made the cut, along with Grosjean, but on the wrong side of the line were Giovinazzi, Stroll, Raikkonen and Kvyat.

Already slowest after the first flying laps, Nico Hulkenberg never got a chance to improve after his Renault suffered a "major problem" with a hydraulics pressure loss leaving him stuck in gear. He was immediately recalled to pit lane for urgent attention from the engineers, leaving him provisionally on the grid in 15th place provided that the problem is resolved before lights out. 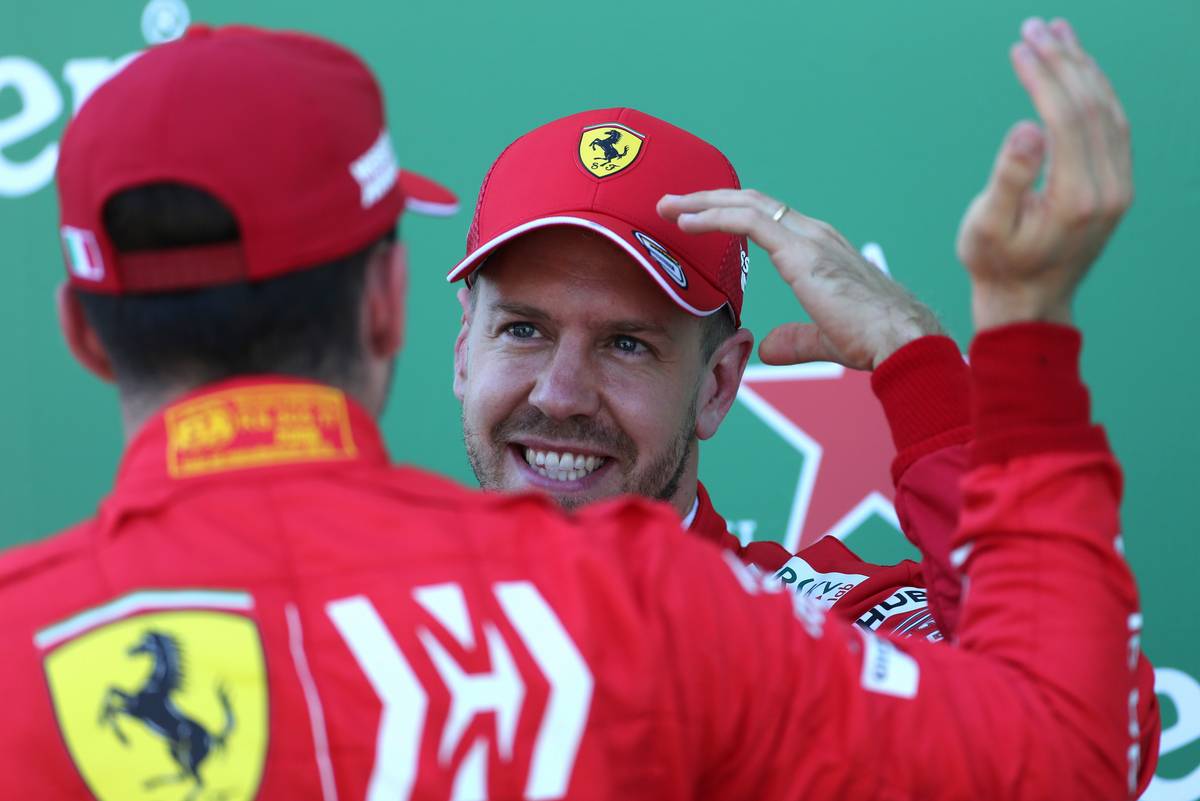 McLaren made an early move at the start of the final top ten pole shoot-out round, Norris briefly going top with a 1:29.248s which was a tenth faster than Sainz. Despite a lock-up along the way, Bottas then bossed him off provisional pole by a full second and a half, which proved to be too fast for Hamilton to match. However this time the two Ferraris rose to the challenge presented by the Silver Arrows, with Vettel punching in a 1:27.212s to edge out Leclerc by almost a third of a second.

Neither Red Bull was able to find that sort of pace, Verstappen and Albon slotting in ahead of the two McLarens while Gasly was three seconds off Vettel's top time in ninth. Grosjean stayed in the garage, opting to put all his qualifying eggs in one basket with just a single run to come toward the end of the session.

There was still time for one final push, and both Ferraris went quicker still through the opening sector. However, Leclerc was still four hundredths slower than his team mate at the line, even before Vettel shaved more time off with his final run. The Ferrari 1-2 duly broke Mercedes' stranglehold on the front row of the Suzuka grid in the hybrid era.

Bottas held on to third place ahead of Hamilton, with Verstappen and Albon on identical times on the third row of the grid. Sainz finished ahead of Norris, while Gasly maintained ninth position after Grosjean's sole run proved to be a tepid affair.