Lewis Hamilton overcame a first lap clash with Max Verstappen to claim victory over Sebastian Vettel in the 2019 Mexican Grand Prix on Sunday. It's Mercedes' 100th Grand Prix win as a Formula 1 constructor.

However Hamilton wasn't able to lock up his six world drivers championship, as his team mate Valtteri Bottas crossed the line in third place to keep him still mathematically in the race heading to the next race in Austin. 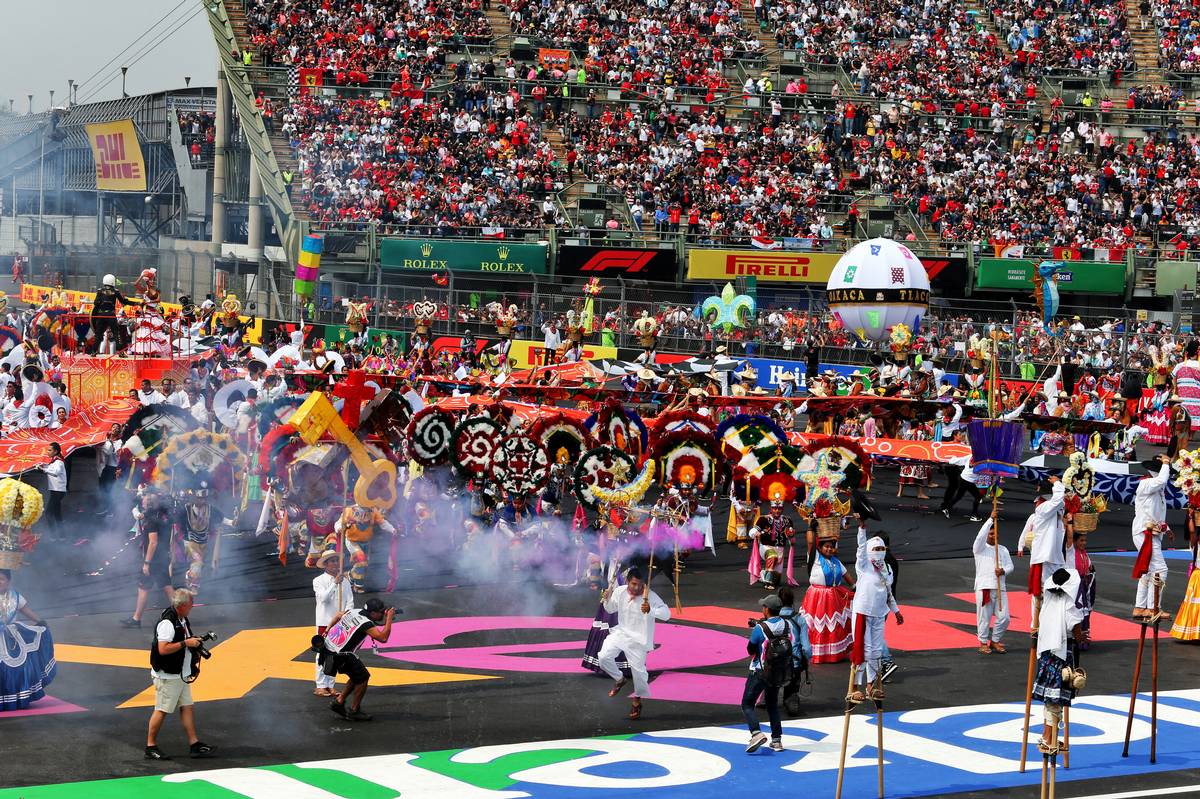 Always one of the most popular venues on the Formula 1 calendar, the Autódromo Hermanos Rodríguez had really excelled itself with a vibrant and colourful pre-race carnival by the time the cars headed for the grid. Naturally there was huge support for local favourite Sergio Perez starting from 11th, but the cheers were almost as deafening for the two Ferraris who now locked up the front row following Max Verstappen's overnight three-place penalty. It had cost the Ditch driver the pole he had won in qualifying, and left the Red Bull starting from fourth place on the second row alongside Mercedes' Lewis Hamilton, who was focussed on clinching a sixth world championship as the lights went out to get the 71-lap race underway.

Having inherited pole from Verstappen, Charles Leclerc's immediate task was to hold on to it through the long drag down to turn 1 and not allow his team mate Sebastian Vettel to get into the slipstream and seize the advantage. In fact it was Hamilton who seemed to get the initial tow, almost getting the better of Vettel for second until the Ferrari pinched him on to the grass and forced him to back off. As a result Hamilton went into the first chicane alongside Verstappen and the pair clashed, forcing both of them onto the grass as a consequence where they haemorrhaged positions.

Debris on the track triggered a virtual safety car which helped calm things down. Leclerc still held the lead despite slight initial contact with Vettel, with Alexander Albon and Carlos Sainz next up having made their way past Hamilton in the opening mêlée. Hamilton himself was down in fifth ahead of Lando Norris and Valtteri Bottas in the rebuilt Mercedes, and after that it was a Honda trio with Verstappen leading the Toro Rossos of Daniil Kvyat and Pierre Gasly. 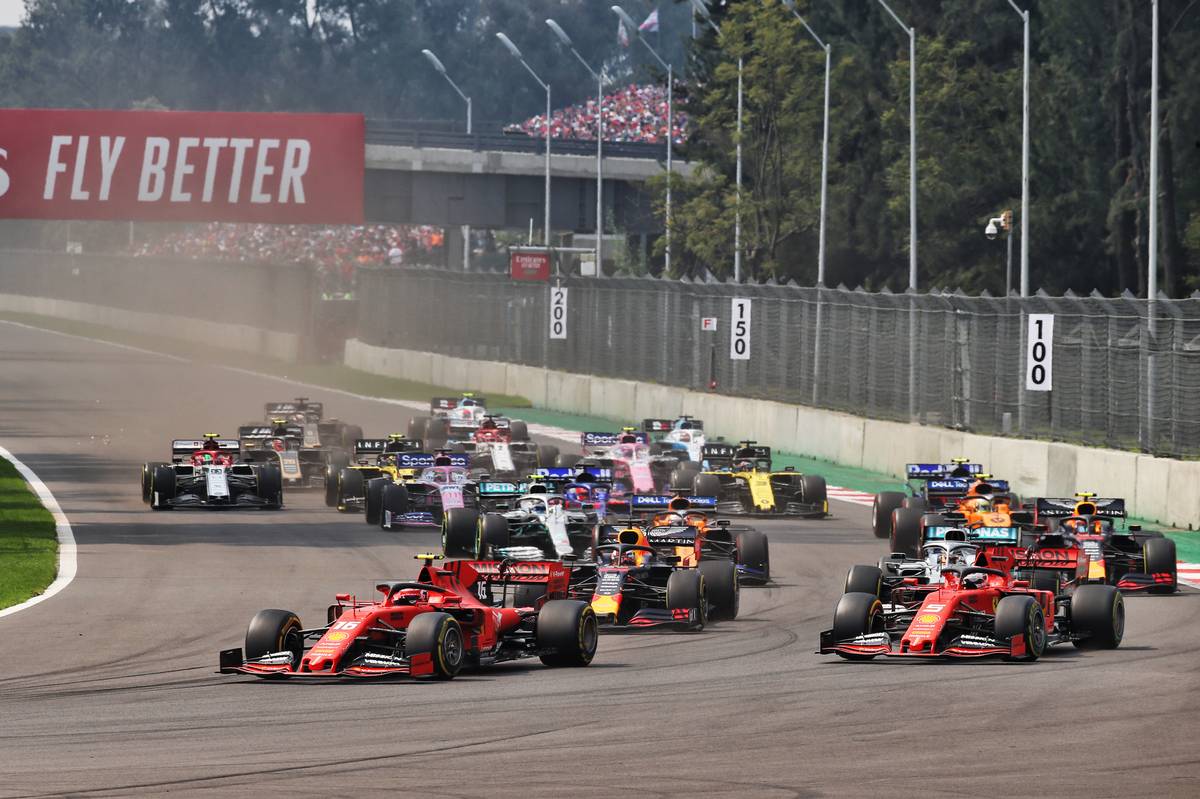 Hamilton made swift work of repassing Sainz for fourth place, while Verstappen was also determined to bounce back with a quick move on Bottas - only to hand the position back when Bottas gained DRS advantage. The battle left Verstappen with a rear right puncture that forced him to limp back to pit lane for an emergency service on lap 5 and an early switch to the hard compound, in a desperate bid to retrieve something from another rapidly unravelling campaign.

Verstappen's exit from the top ten promoted Perez into the points, and he was soon past Gasly for ninth place as the race settled down after a breathless opening eight laps. Leclerc had already pulled out a 1.6s lead over Vettel, while Albon was managing to keep himself out of DRS range of Hamilton in his bid to hold on to the final podium position. The top four were all on mediums, with Sainz in fifth the first on the soft compound tyres; however even with that advantage he wasn't able to hold off Bottas for long before the Mercedes finally swept past.

A huge roar erupted in the stadium section as Perez dispatched Kvyat for eighth place on lap 10. Kvyat pitted next time by, Gasly having already made his first stop of the afternoon for the switch to the hard compound. That meant that the two Renaults of Daniel Ricciardo and Nico Hulkenberg were promoted into the top ten, the Aussie having opted to start the race on the hard tyres. The pair both made up another position on lap 14 when Norris made his first stop, only for the McLaren's left front tyre to be improperly fitted. The Briton was able to stop before leaving pit lane, allowing the team pit crew to race to the scene and push the MCL34 back to the pit box where they could attach the errant tyre, albeit at huge cost in terms of lost time. 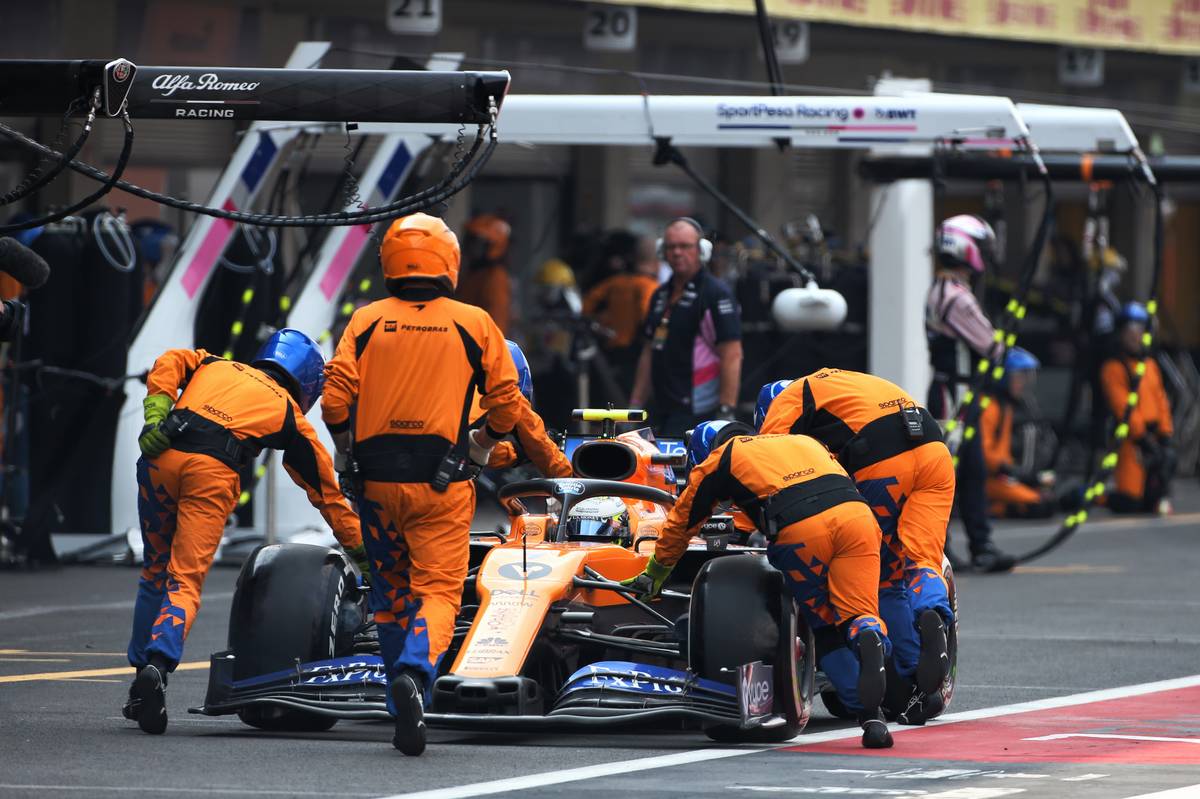 Albon was the next of the leaders to come in on lap 15, followed Sainz and then by race leader Leclerc on the next lap. Vettel was in no hurry to follow suit, describing his own starter set of tyres as 'peachy' giving him the chance of holding on for a single-stop strategy. Now up to second there was also no sign of an imminent stop for Hamilton, with Bottas running some seven seconds behind him ahead of Leclerc, Albon, Perez, Ricciardo, Hulkenberg, Lance Stroll and Antonio Giovinazzi.

There was more drama in pit lane with a badly fumbled pit stop for Giovinazzi costing the Alfa Romeo all that hard-won early gain. Fortunately it was better for home hero Perez who came in for a set of hard tyres on lap 21 and come back out in tenth place. The fresh rubber allowed for rapid overtaking moves on Sainz and Kvyat, and the Mexican was soon back up to eighth place again.

Hamilton was in on lap 23 to change the medium tyres for the hard compound, but Vettel stayed out in the lead. While the Ferrari was clearly struggling with a lack of grip from the well-worn tyres, his six second advantage over Bottas nonetheless remained constant. Leclerc was a further six seconds behind and seemingly unable to to anything about catching the cars ahead despite exhortations from the Ferrari pit wall, while Hamilton was sending increasingly anxious radio messages to his own stand-in race engineer complaining that the new set of tyres weren't performing and that the strategy might be about to blow up in their faces. The team reassured him that a win was still within reach, and Hamilton duly put his head down and got to work. 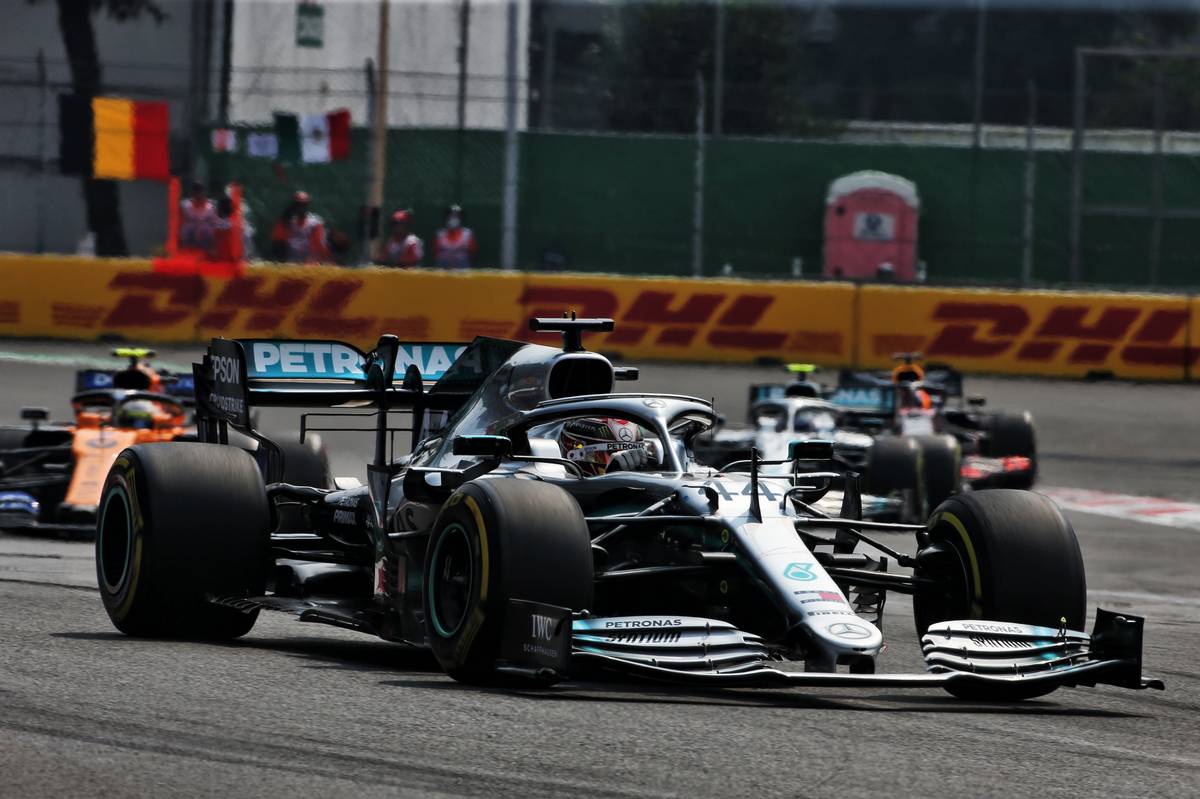 By mid-race distance, Verstappen had fought his way back to tenth place having survived a bad-tempered encounter with Haas' Kevin Magnussen along the way. Vettel also had a scare when he came up to lap the battle for 12th between Sainz and Gasly, almost losing his front wing on the back of the McLaren as he threaded his way through. Moments later Ferrari summoned Vettel into pit lane as the team quickly responded to Bottas finally making his own pit stop on lap 37.

Those moves restored Leclerc to the lead by eight seconds over Hamilton, with Albon in third ahead of Vettel and Bottas. Leclerc had a second stop to make which took place on lap 43, and there was yet another pit lane issue with the Ferrari mechanics struggling to attach the rear tyre costing Leclerc several seconds and dropping him behind Bottas. There were no such problems with Albon's own second stop next time by, but even so he wasn't close enough to use the opportunity to undercut Leclerc. 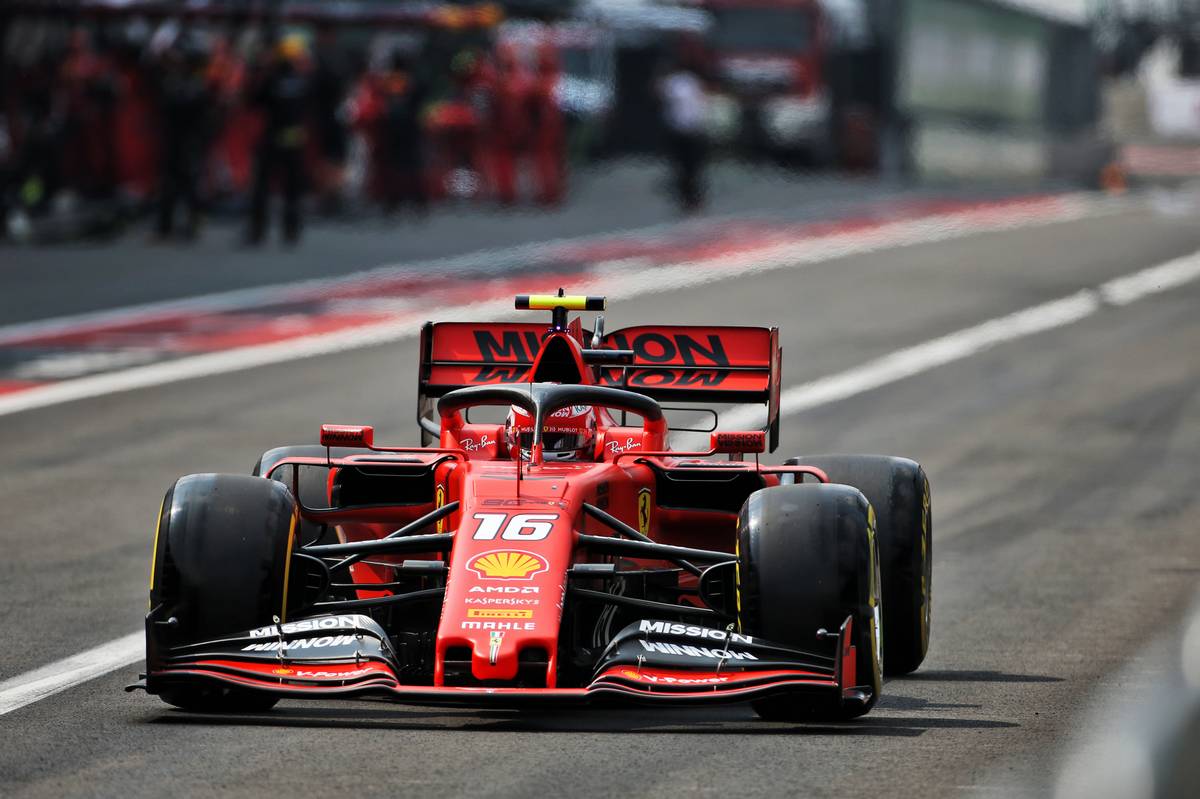 While that left Hamilton in the lead, Vettel's fresh tyres gave him a huge speed advantage - but Vettel was himself under heavy pressure from Bottas. The top three had some breathing space back to Leclerc who was working hard to overcome his pit stop hold up, but the Monegasque was already well out of range of Albon. Verstappen was up to sixth having not stopped again since lap 5, with Perez holding steady in seventh ahead of Ricciardo who had finally made his own single stop on lap 51. Hulkenberg and Stroll rounded out the top ten ahead of the Toro Rossos, and it was proving a bad weekend for McLaren with Sainz now down in 13th and Norris having finally being ordered to retire after falling to the back due to his catastrophic pit stop stop.

By lap 58, the top four were all covered by just 5.5s seconds and only nine cars remained on the lead lap. However, Leclerc's charge back into contention was suspended when the Ferrari went wide while trying to find his way passed the lapped Gasly which cost him two seconds, relieving the mounting pressure on Bottas. Ricciardo also went off-roading when he tried to utilise DRS to pass Perez into the first turn on lap 62, the partisan home crowd cheering with delight as Perez retook the position while the Renault slithered across the grass.

With seven laps to go, Hamilton's margin over Vettel was waning and down to just two seconds, but the well-travelled hard tyres still showed little sign of the widely anticipated drop off the proverbial cliff. Bottas was still lurking menacingly in third while Leclerc was trying to hard to recover the earlier lost time. However the laps were counting down at an alarming rate, and ultimately no one could break the deadlock before the chequered flag finally came out to greet Hamilton across the line for his first win in Mexico since 2016. 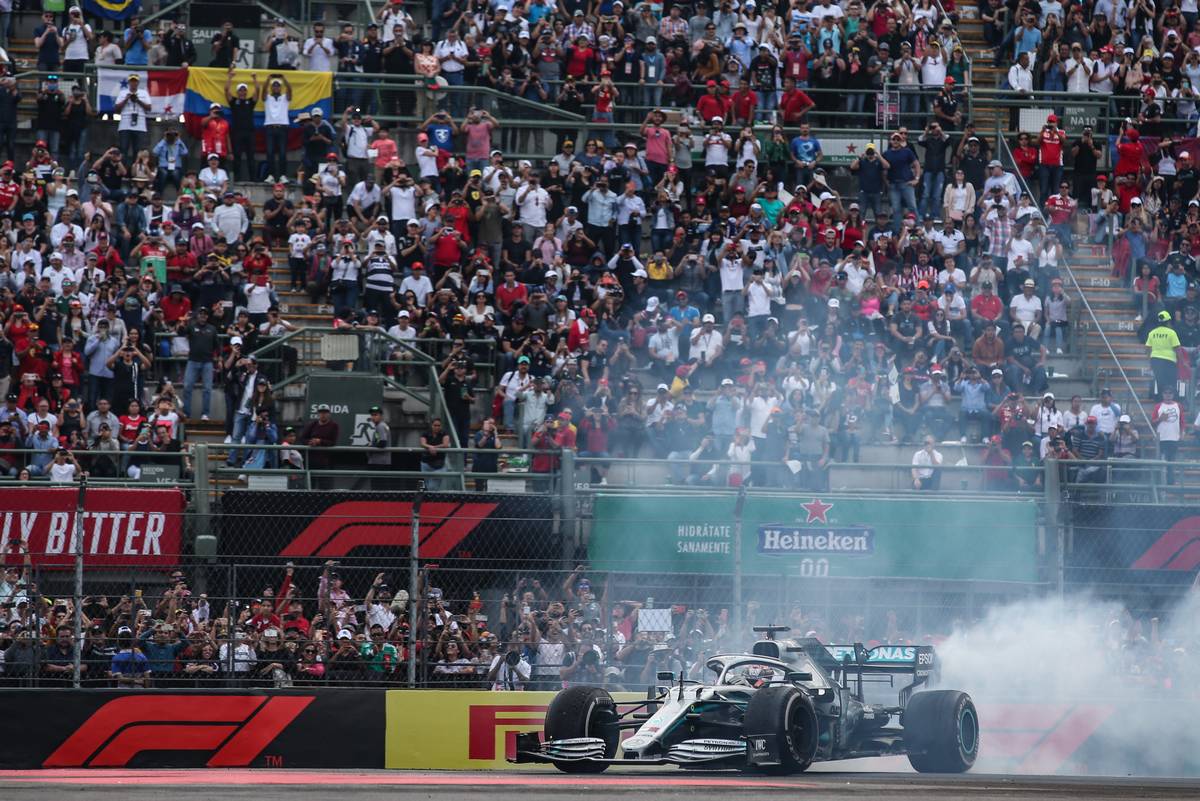 Vettel had to settle for second place, while third for Bottas meant that the Finn is still in with a mathematical chance of catching Hamilton in the drivers championship. Leclerc will be unhappy with missing out on the podium with the bonus point for fastest lap little consolation. Albon took fourth well ahead of his compromised team mate Verstappen, who nonetheless picked up the official F1 driver of the day honours.

Rounding out the top ten at the line were Perez, Ricciardo, Kvyat and Gasly. Hulkenberg missed out on eighth place after being tipped into a spin on the final lap by Kvyat, backing the Renault into the wall and dislodging the rear wing to trigger late local yellows. The incident was immediately placed under review by the race stewards, and Kvyat soon handed a ten second penalty for causing a collision. It dropped him to 11th, restoring Hulkenberg into the top ten in the final classification.

The other drivers missing out on points today were Stroll, Sainz, Giovinazzi, Magnussen, George Russell, Romain Grosjean and Robert Kubica, with Kimi Raikkonen and Lando Norris the only retirements of the afternoon.