McLaren F1 boss Zak Brown says the team's new principal partner deal with British American Toboacco will lead to its cars racing with a "quite impactful" livery next season.

McLaren will extend its commercial partnership with BAT in 2020, with the multinational tobacco company boosting the branding of its cigarette alternatives by taking over significant areas of the future McLaren's real estate.

Brown was mum on the changes, but McLaren's creative department has apparently delivered a stunning livery design.

"Our car design, which we will won't reveal until we unveil our race car in February, it looks quite special," said Brown on Friday.

"I think you'll like what the race car looks like with the various categories that BAT use on the race car.

"So, I don't want to spoil that debut. But I will say it will look quite impactful and be very noticeable on the racetrack."

Brown didn't give out many clues, but the American did reassure McLaren's die-hard fans that 'papaya' would feature prominently in the 2020 concept.

"BAT is our biggest partner but we will always stay core to our papaya," he said. "It is a kind of celebration of the history of McLaren and our colour palette." 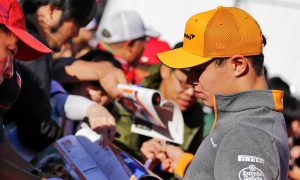