Lewis Hamilton achieved a record 92nd Formula 1 race victory on Sunday in Portimão, despite initially losing the lead during a fraught start to the race.

Both Hamilton and his Mercedes team mate Valtteri Bottas initially struggled to get their tyres up to temperature as light rain fell, allowing Carlos Sainz to take surprise early control.

Hamilton was subsequently able to recover and reclaimed the lead on lap 20 after which it was business as normal, eventually pulling out a whopping 25s advantage over the rest of the field.

Max Verstappen in third and Charles Leclerc in fourth were the only other drivers not to be lapped by the winner, while Pierre Gasly won a tight battle for fifth from Sainz and Sergio Perez. 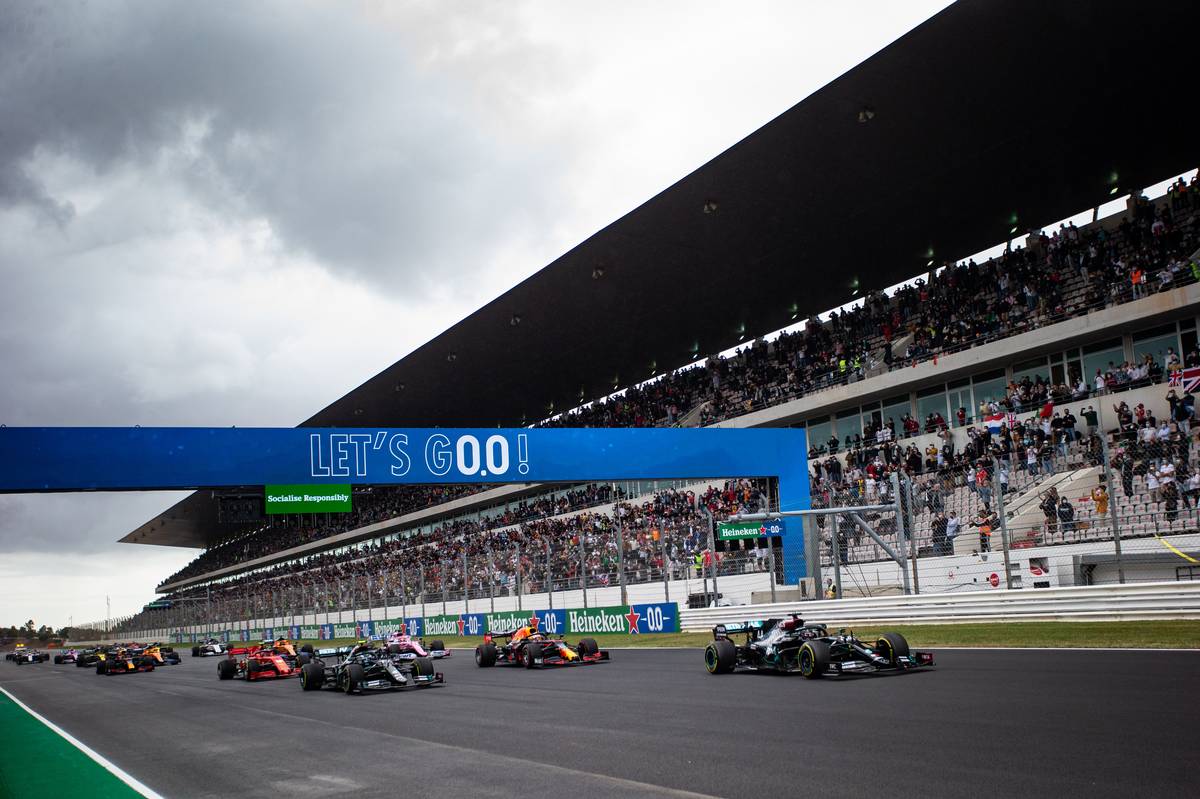 As Lewis Hamilton and Valtteri Bottas led the field to the grid for the start of the first Portuguese Grand Prix in 24 years, the conditions overhead were distinctly more overcast than they had been for qualifying 24 hours earlier. Rain was an imminent possibility, with drivers even reporting drops falling on the formation lap, which was sure to add to the challenge of the newly resurfaced Autódromo Internacional do Algarve.

Hamilton initially got a good launch from pole position while Bottas lost second to Max Verstappen who had the advantage of soft tyres. But Bottas soon muscled his way back in front of the Red Bull, and Verstappen then clashed with Sergio Perez which sent the Racing Point spinning off.

A short spell of fine rain was clearly playing havoc, leaving the two Mercedes struggling to get heat into their medium tyres. Hamilton found it impossible to maintain his early pace and surrendered the lead to Bottas on the first lap. But the real threat came from the McLarens: starting from the fourth row of the grid, Carlos Sainz was able to pass Hamilton and then surge his way past Bottas through turn 5 on lap 2 to claim the lead of the race, while Lando Norris was himself up to fourth place behind Hamilton and ahead of Verstappen. 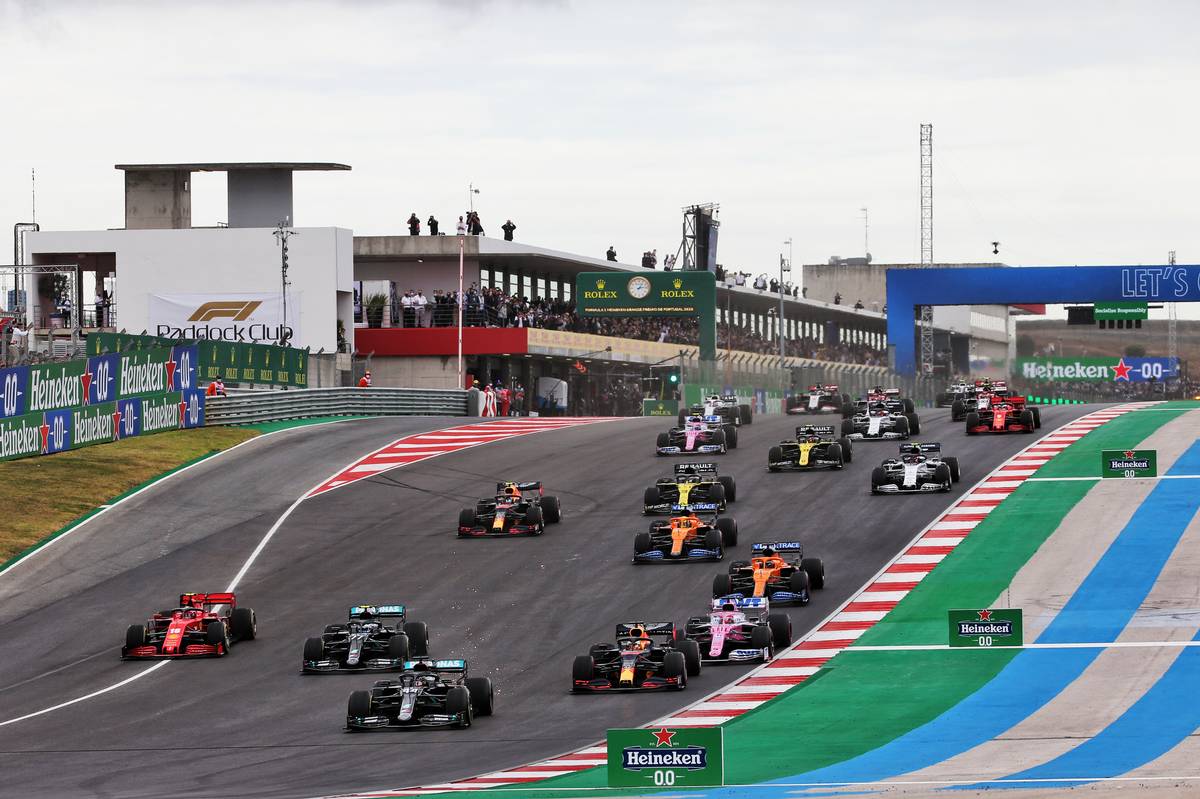 Sainz initially stretched his lead to 1.4s, but after five laps the rain had cleared up allowing the medium compound to get into its temperature window. Bottas was able to re-pass Sainz for the lead, and Hamilton followed suit on the next lap to restore the traditional Mercedes supremacy. Verstappen was also finding his form and soon took care of both McLarens to move up to third place, the usual running order reasserting itself after that hectic, breathless start.

The DRS zone down the main straight was prompting a high number of overtakes, many of them at the expense of Kimi Raikkonen. The Finn had enjoyed a terrific start to jump into sixth from 16th on the grid, but who then lacked the speed in the Alfa Romeo to maintain the position as he was passed each lap by the likes of Charles Leclerc, Daniel Ricciardo and Pierre Gasly. Unsurprisingly he was the first to make a scheduled stop on lap 12 to trade the waning soft tyres for a set of mediums.

Ricciardo had also started to struggle on the soft tyres and was passed in quick succession by Gasly and Lance Stroll, and he was in for service on lap 15. Even Hamilton was complaining about graining on the medium tyres, but this was offset by setting a new fastest lap moments later to close right up to his team mate. Once he was within DRS range the pass became an inevitability, and Hamilton was back in the lead at the start of lap 20. Before Bottas could consider a counterattack, Hamilton was able to scamper away to safe distance. 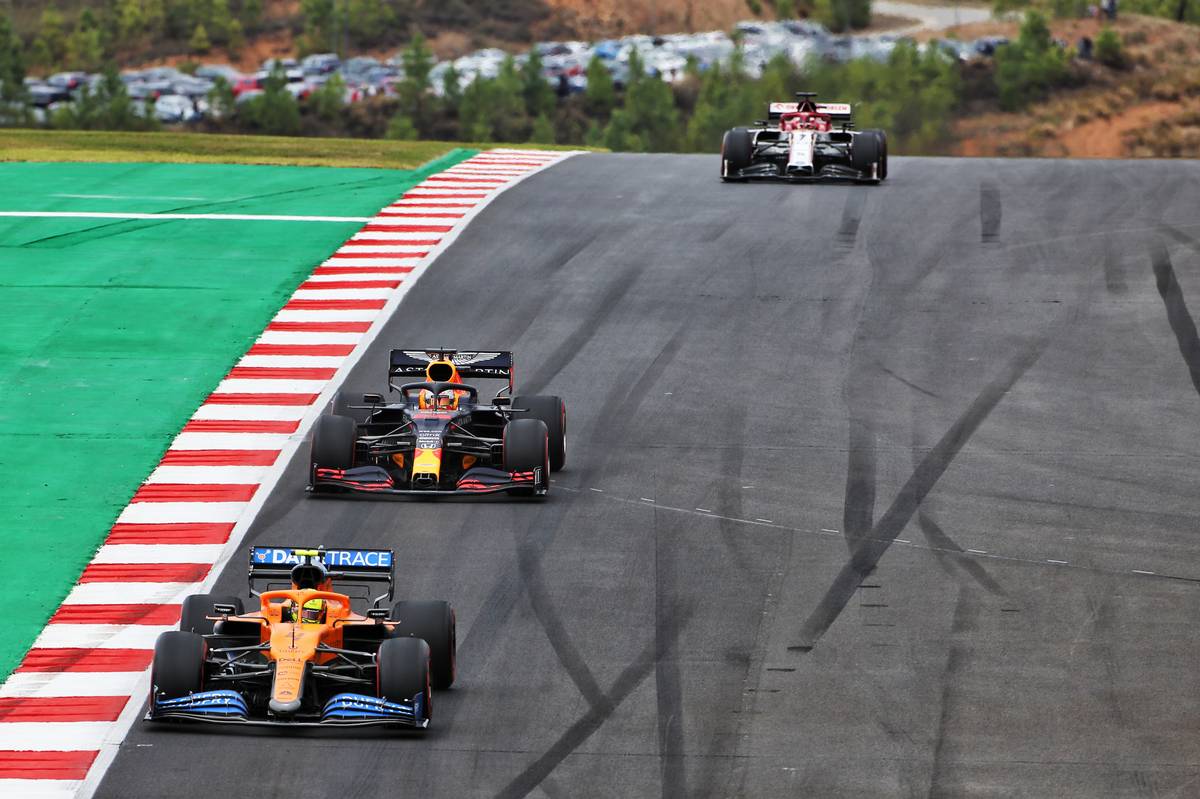 Meanwhile Racing Point's day had taken a turn for the worse when Stroll attempted to pass Norris for seventh and the pair made contact. Stroll found himself in the gravel, and while he was able to recover to the track both cars had suffered damage and needed to make a visit to pit lane for replacement parts as well as new hard tyres. The stewards investigated the incident and deemed Stroll at fault, handing him a five second time penalty. To add insult to injury, he would receive another penalty a few minutes later for persistently exceeding track limits.

Verstappen pitted on lap 24, coming back out on medium tyres in turn 6 which left Leclerc - the only other driver to have started on the mediums - in third ahead of Gasly and Sainz, who were both soon in for their pit stops. That dropped Sainz out of the top ten, where he had a spirited battle with Raikkonen in his efforts to get back into the points. he found the wily veteran a hard nut to crack before the McLaren's superior speed finally put the matter beyond doubt. After that there was a thrilling wheel-to-wheel battle between Esteban Ocon and a recovering Perez over fifth place, which went the Mexican's way.

Leclerc finally pitted on lap 36, switching to the hard tyre and coming back out ahead of Perez. Mercedes waited until lap 40 before bringing Hamilton in for a new set of hard tyres. Bottas contemplated going to the softs but Mercedes told him that the team plan required him to take the same hard selection after all which left him painfully lacking grip on the cold tyres when he came back out. The battle for the race win was effectively over, and Hamilton on his way to setting a new record of 92 Grand Prix victories. 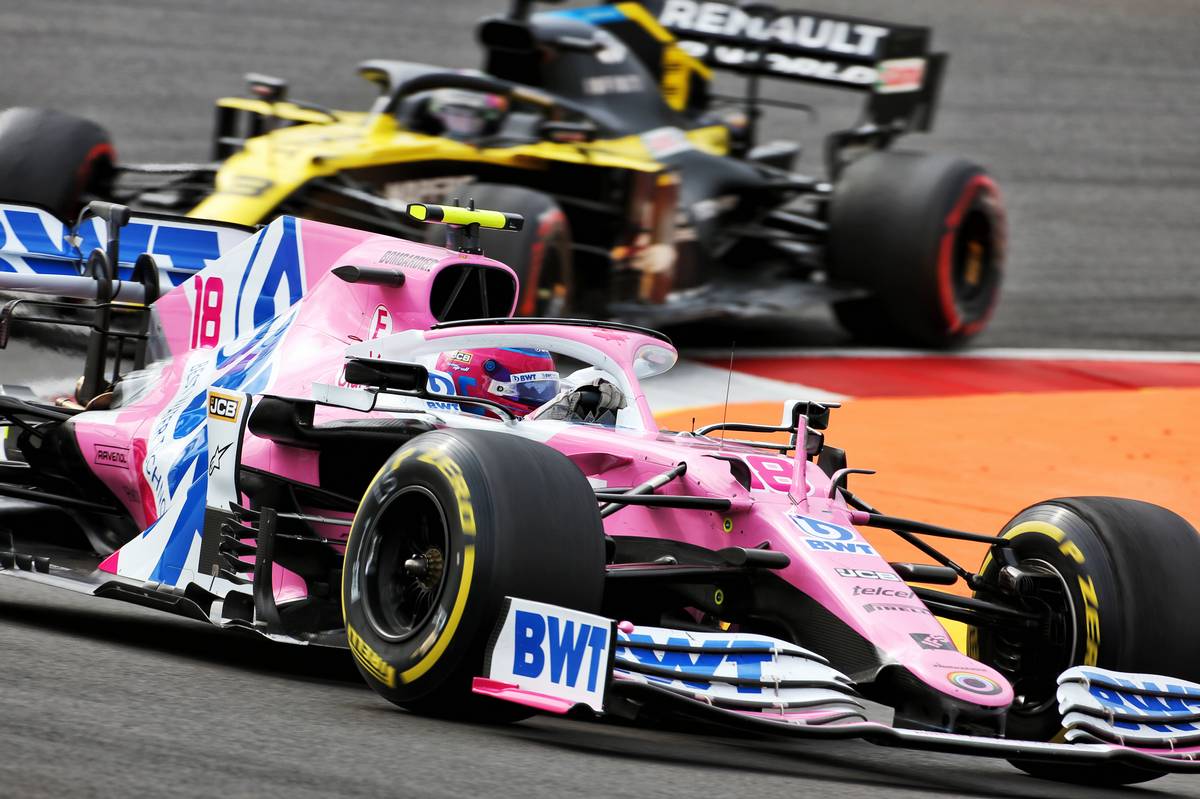 Verstappen was by now in familiar territory in a lonely third place, while Leclerc was back in fourth ahead of Perez and the yet-to-stop Ocon. Gasly and Sainz were passing Ricciardo for seventh and eighth respectively, leaving Raikkonen in the final points-paying positions with Vettel and Albon on the outside looking in. George Russell was up to 13th after passing Antonio Giovinazzi, while Lando Norris had fallen out of the picture and down to 17th following his earlier clash with Stroll and now a slow puncture obliging him into another pit stop.

Stroll himself called it a day on lap 54, pulling into the Racing Point garage to become the first and ultimately only retirement of the afternoon. That was just seconds before Ocon became the last driver to make a pit stop, getting back out behind Ricciardo despite a hold-up during the changing of the front tyres, but soon able to pass his team mate on the fresh rubber. Just behind the two Renaults, Vettel had finally succeeded in passing his old team mate Raikkonen to lay claim to the solitary point for tenth.

By the time the chequered flag came out, Hamilton's lead over Bottas was over 25s - the biggest winning margin of the season so far. Verstappen was a further ten seconds back followed by Leclerc, Gasly, Sainz and Perez. Ocon and Ricciardo were next across the line, followed by Vettel in tenth. 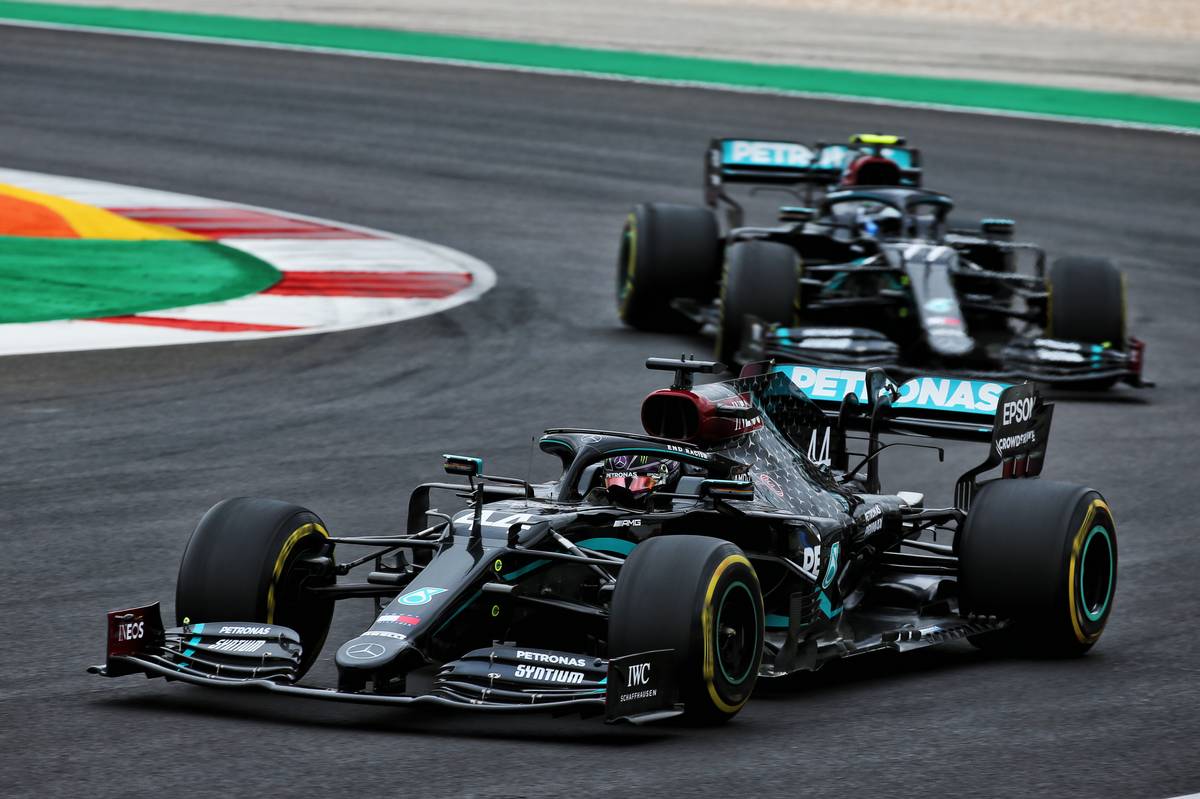 Raikkonen missed out on the points in 11th, followed by Albon. Norris managed to catch and pass Russell for 13th place in the closing laps, with Giovinazzi in 15th followed by Haas pair Kevin Magnussen and Romain Grosjean, and Nicholas Latifi taking 18th ahead of Daniel Kvyat who had been penalised for exceeding track limits too many times.