Valtteri Bottas was left ruing a mysterious lack of pace that cost him a chance of victory in Sunday's Portuguese Grand Prix at the Autódromo Internacional do Algarve in Portimão.

Initially running on the medium tyres, Bottas suffered a sluggish start to the race from second place on the grid and lost out to Max Verstappen in the soft-shod Red Bull into the first corner. However he was able to quickly recover the lost position.

Meanwhile Lewis Hamilton had got a clean start from pole but then struggled to get up to speed, allowing Bottas to pass his Mercedes team mate and then overtake Sainz to claim the lead for himself on lap 4.

But after initially pulling away, Bottas was reeled back in by Hamilton who passed him on lap 20, with Bottas unable to match his pace.

"The opening lap was pretty good," Bottas recalled. "There was a bit of drizzle, which made it a bit tricky.

"Obviously, some cars from behind on the soft tyre had the upper hand, but I was pretty pleased I could get the lead.

"But to be honest, after that I just had no pace today," he said after the race. "I don’t understand why, but no pace.

"I tried to defend but at the rate he was going to close there was nothing really I could do," he sighed.

"Like I said, I have no idea why I didn’t have the pace today. Pushing hard but should have gone faster.” 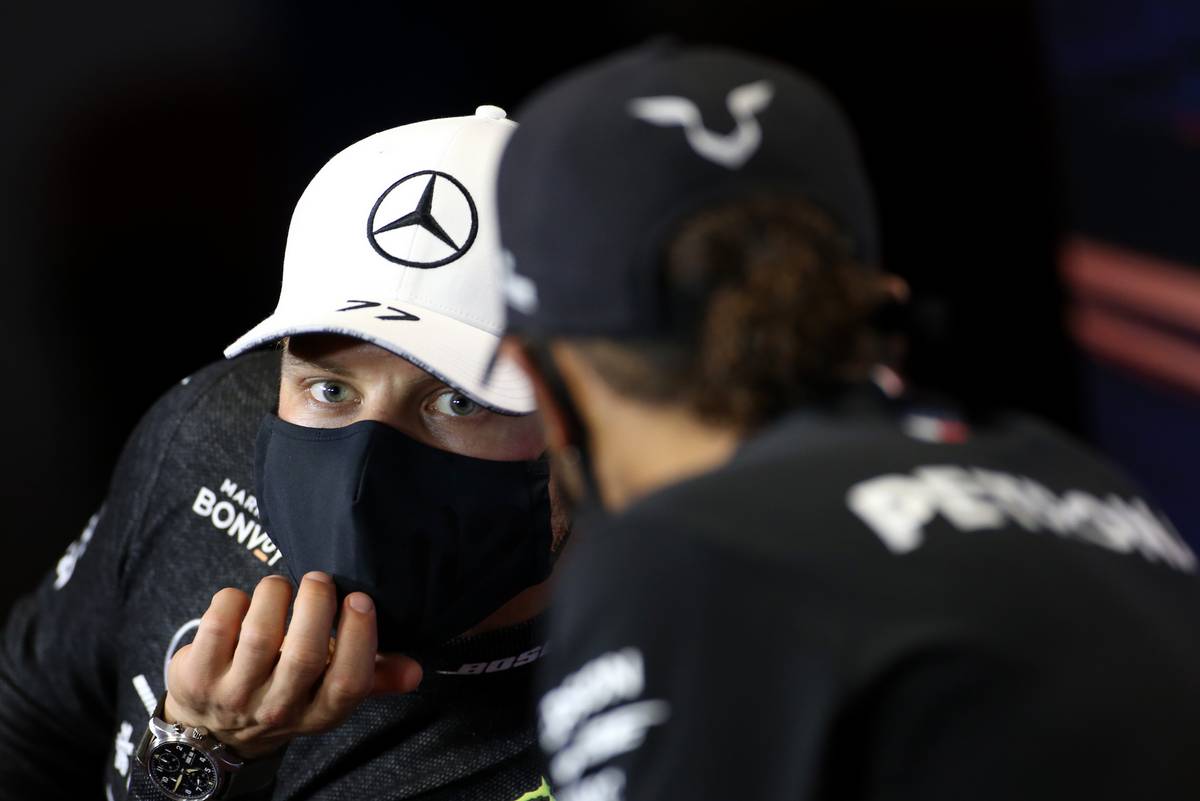 Bottas stayed out on the medium tyres until lap 41, one lap longer than Hamilton.

After Hamilton switched to the hard compound for the final stint, Bottas toyed with going for the soft compound instead only to be overruled by the team.

“I was hoping to extend the first stint a bit and go for the softs at the end, but I don’t think it would have made any difference to the result today,” he said.

"We have done it on occasions but it's always a tricky situation," Mercedes principal team boss explained when asked why they hadn't split the strategies between the two drivers.

"We were pretty convinced that the hard was the better tyre," he continued. "All data that we've seen from cars out there leaned towards the hard outperforming the medium and the soft.

"When you look at Checo and Esteban at the end the soft didn't function at all," he added. "It was actually the weakest tyre at the end of the race.

"We were pretty robust in our decision, because we expected it to be the better tyre," he concluded. "[But] we don't want to interfere too much, and there will be situations where we ware going to allow these calls."

Bottas now trails Hamilton by 77 points in the drivers championship with five races remaining in the 2020 season.

The Finn has 17 points in hand over Verstappen who is currently in third palce in the standings.