Sebastian Vettel was among the first to congratulate Lewis Hamilton on his seventh title after Sunday's Turkish GP, conveying to his old arch-rival a very sincere compliment.

Hamilton defied his rivals and the elements in brilliant style at Istanbul Park, the Mercedes driver sealing a record 94th career win in F1 while equaling the seven world titles of the great Michael Schumacher.

However, it was anything but a straightforward affair for the Briton who had steadily worked his way to the front of the pack in the dismal conditions - and battling with Vettel along the way - to take the lead with 20 laps to go.

Rather than stopping to mount a fresh set of intermediate tyres, as his team requested, Hamilton overruled the Mercedes pitwall and extended his second stint to the extreme, remarkably putting himself out of reach of the field.

After the race, as Hamilton was sat in his car in Parc Fermé soaking up the special moment, Vettel, fresh from his third-place finish, kneeled to offer a few words to the newly crowned world champion.

"I told him it’s very special for us because we can witness history being made today," Vettel said when asked what he had told the Briton after the race.

"I think he is the greatest of our era for sure. I think it’s always difficult to compare… how can you possibly compare Fangio, Stirling Moss to our generation? You can’t.

"But it doesn’t matter, I think every era has its driver or its drivers and Lewis is certainly the greatest of our era." 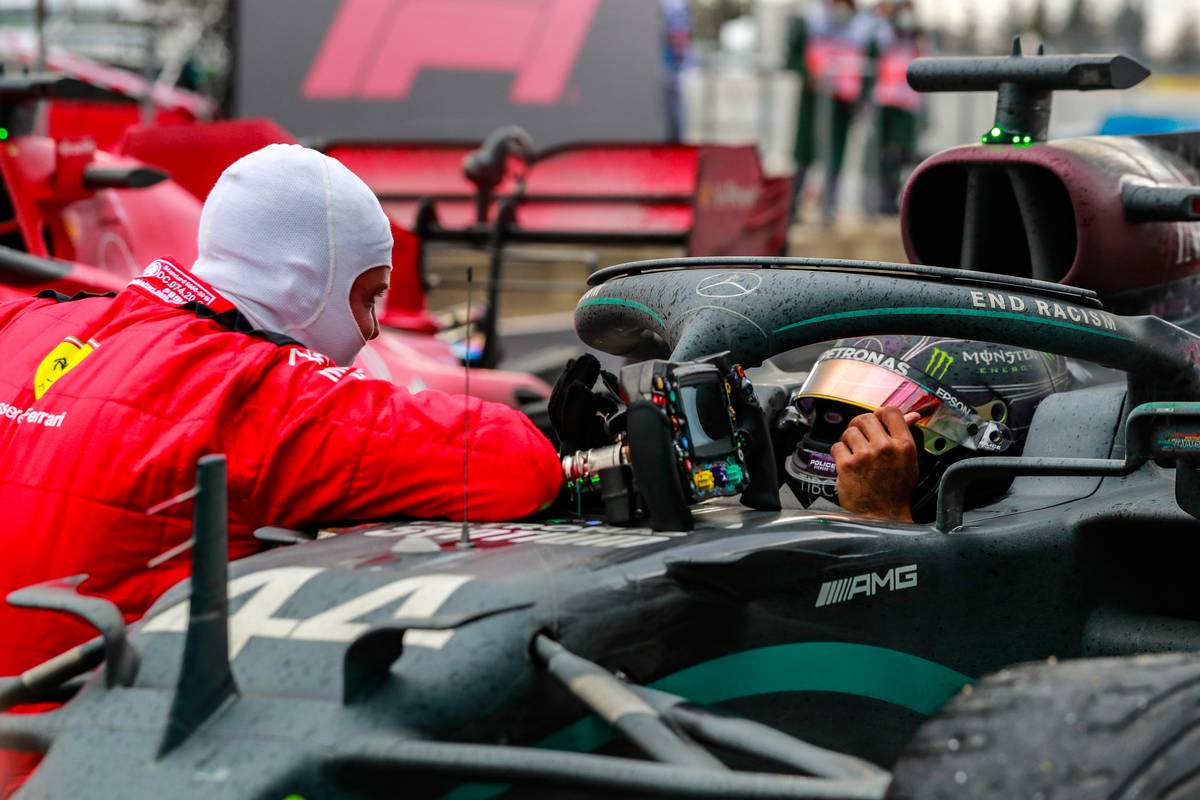 Hamilton's achievement also had a special resonance for Vettel who spared a thought for his personal idol, Michael Schumacher.

"To me, certainly emotionally, Michael will always be the most… the greatest driver, but there’s no doubt that Lewis is the greatest in terms of what he has achieved," said the four-time world champion.

"He’s equalled the championships, he’s won more races, he has a lot more pole positions so I think he’s done everything you can ask for."

But assessing Sunday's race, Vettel underscored Hamilton's extraordinary display of skill and talent in the treacherous conditions that allowed the Mercedes driver "to pull something special out of the bag".

"I think today is the best proof," he added. "It’s a difficult race, a very difficult race to stay on track and two hours long and probably, if we’re honest, it wasn’t his race to win and he still won it.

"I think, once again, he managed to pull out something special out of that bag and therefore I think he deserves everything he has achieved."