Fernando Alonso is sparing no effort to spur on Renault ahead of his return to F1 next season, with the Spaniard pushing the Enstone squad to have its 2021 car in the wind tunnel as soon as January 1st.

Renault F1 executive director Marcin Budkowski offered some insight into the level of Alonso's motivation and determination, and the two-time world champion's support for his outfit's 2021 efforts.

F1's regulations don't allow teams to begin wind tunnel development on their 2021 contender until the start of next year. And Alonso wants Renault to hit the ground running at Enstone on January 1st!

"He’s asking about anything," Budkowski explained. "We were in the windtunnel, and he said, 'so you can't run the '22 car at the moment?’”.

"I said, 'no, we can't do it because of the regulations.' He said, 'when can you start developing?' and I said 1 January.

"This is the level of motivation of Fernando at the moment."

Alonso has already started to stretch his legs on the track ahead of 2021, enjoying a short run with Renault's 2020 car during a filming day at Barcelona before undertaking several days of testing with a 2018-spec machine in Bahrain and last weekend at Abu Dhabi.

"But he also hasn't driven the car for two years. They are bloody fast cars. He needs to get back in shape, get back in the rhythm, so he's taking any opportunity he can to drive." 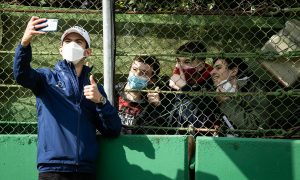