Valtteri Bottas and Lewis Hamilton were unaware that their Mercedes engines were marginally turned down for Sunday's Abu Dhabi GP to safeguard against a potential MGU-K failure.

Red Bull's Max Verstappen cruised to a dominant win in Formula 1's season finale at Yas Marina, with Bottas and Hamilton trailing the Dutchman by over a 15-second margin at the checkered flag.

Wolff suggested that Mercedes had "taken a bit of performance out" of its engines. But that was news to Bottas and Hamilton after the race.

"Honestly, I wasn’t aware that the engine was turned down," said Bottas. "I can’t really say much. I don’t know if it was how much it was. So, I don’t know.

"Red Bull was obviously quicker and for the first time this year they have such a gap on the race pace against us so… not much more to say." 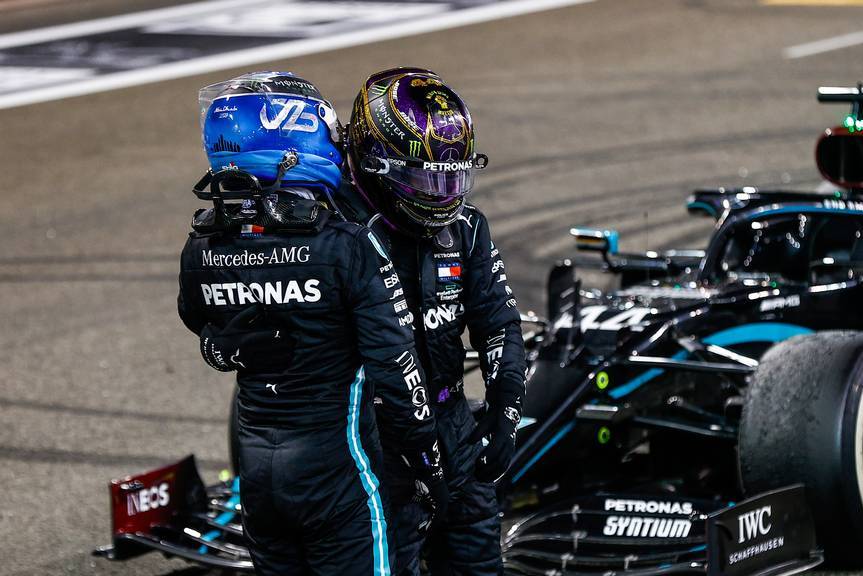 Hamilton was also unaware of any power output changes, but admitted that they would have made sense in light of the MGU-K issues encountered recently by Racing Point and Williams.

“When we go back now we’ll ask about it because I wasn’t aware of that personally, I arrived late Thursday night," said the seven-time world champion.

"HPP and Mercedes have done an amazing job this year. If you look at my reliability for example it’s managed to finish every race so it’s been really fantastic.

"There have been issues with other engines that Mercedes have done for example for the Force India [Racing Point] and with the Williams. So we definitely have work to do.

"If they have done something then it would make sense for sure."

On Sunday evening, Mercedes' head of trackside operations Andrew Shovlin confirmed the manufacturer's engine had been set to a more "conservative" mode although the change may have not been perceived by the drivers.

"It’s not fully understood yet but there have been failures related to the K on Mercedes engines in the last couple of events," Shovlin explained.

"I would say that rather than being acutely aware of a specific problem, we are operating the power unit in a way that’s as conservative as we can be in order to try and avoid a problem.

"When you don’t understand exactly the string of issues all you can do is just be a bit cautious. So during the race we were trying to reduce the duty marginally.

"The drivers wouldn’t have necessarily been aware of it. It was just something we were trying to manage in the background."