VeeKay delivered to Ed Carpenter Racing it's first win since 2016 but the van Kamlthout's victory also extended a series of remarkable opening races for the 2021 NTT IndyCar Series, with three first-time winners – VeeKay, Alex Palou and Pato O'Ward – in the five races held so far.

Dale Coyne Racing rookie Grosjean led the first half of the race, but the Frenchman was undercut and overhauled by VeeKay on lap 49 of 85 and unable thereafter to regain an edge over the flawless Ed Carpenter Racing charger, crossing the checkered flag 4.95s adrift from the latter.

“We had an awesome start to the weekend. I knew we had the car; we were so fast," said Rinus VeeKay. "I'm so happy for the team, so thankful. I couldn't have done it without them.

"A perfect day. It's amazing and thank you to all the fans coming out. Getting my first podium here last year and now winning, it's a dream." 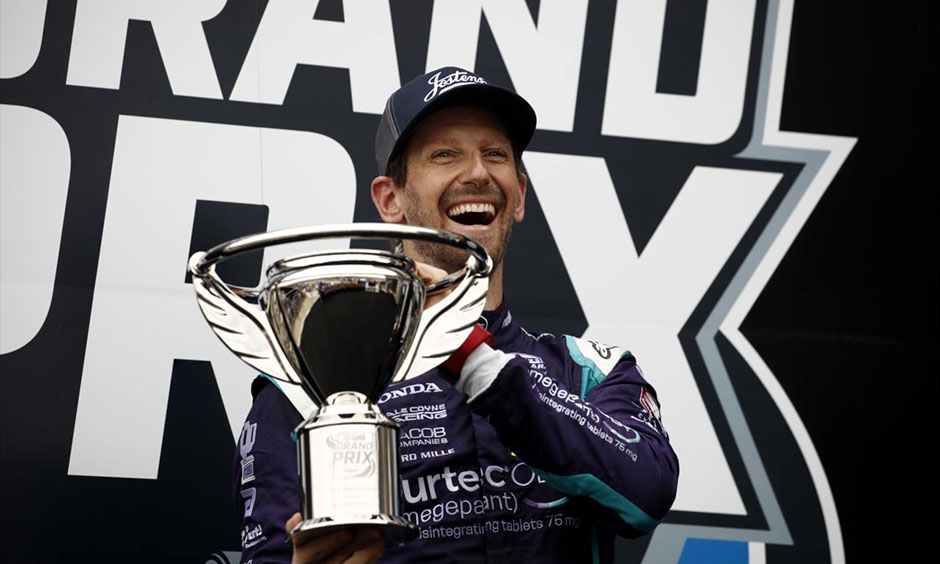 Grosjean, who enjoyed his first top-three finish in a motorsport event since the F1 Belgian Grand Prix at Spa with Lotus in 2015, was happy with his day overall but reckoned that traffic had likely cost him his maiden IndyCar win.

“That’s really a good day,” Grosjean said. “I think we’ve done really good work this weekend. We learned at the start of the race, and we were super fast.

"We were a bit unlucky with the slower cars and traffic, but P2 in my third INDYCAR race is not too bad.”

“In Formula 1, I was shown the blue flags quite a bit over the last few years and it was terrible for us!” he said.

“[But] the leader complained that it wasn’t good enough. Today I wish [blue flags were shown] more often because I was the guy that was chasing them, but it’s the rule that IndyCar use.

“Is there room for improvement? Probably. Is there a perfect solution, but definitely traffic cost us the win today.”

As Grosjean continues to establishes himself in IndyCar, the man who "walked out of fire" in Bahrain six months ago has already won over the hearts of many American supporters who were quick to acclaim the former Haas driver after his impressive weekend in Indiana.

“People have been very good to me,” he said. “I’m very grateful for all of the support for me and my family.”