NASCAR legend Jeff Gordon revealed that a promotional test with Williams in 2003 led to tentative discussions about racing in F1 that got "a lot more serious" than the American driver thought.

In 2003, at the height of his career in NASCAR, Gordon traded places for a day with Williams charger Juan Pablo Montoya, with the pair swapping their Chevrolet Monte Carlo and Williams FW24 rides for each other to sample on Indy's road course.

Speaking to F1's Tom Clarkson on the latter's latest Beyond the Grid podcast, Gordon revealed just how close he got to making a switch from the world of stock car racing to Formula 1.

"So there were a lot of discussions that went on that got more serious than I thought they would after that [test], because I did have so much fun with it and I started thinking: ‘Can I train my neck enough to do this, can I learn the tracks, can I be competitive?’" remembered Gordon.

"I went to the Spanish Grand Prix in Barcelona, just on vacation really, just walking around, but it happened to be when the Formula 1 race was happening and so we went to the race.

"Jimmie Johnson was actually with me and all of a sudden a couple people are like, ‘hey, such-and-such would like to talk to you’ and I’m over in the Jaguar paddock – ‘hey, tell us about what’s going on with your future, we saw you drove the Williams’. 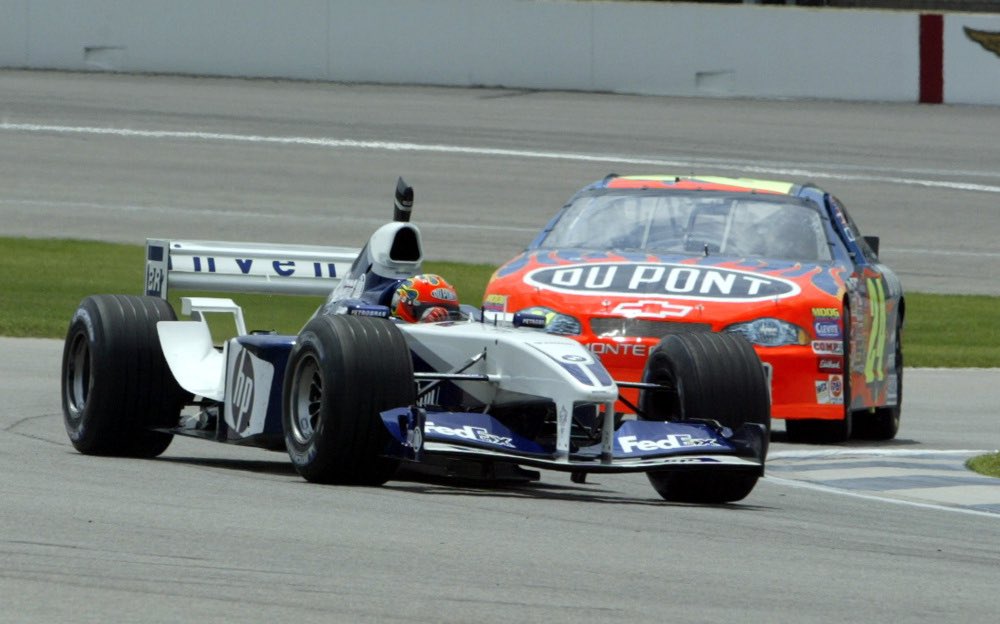 The four-time Winston Cup champion said that talks were held with Williams, but also with the new BAR team that had taken over Tyrrell on the eve of the outfit's entry into F1.

"There was one other conversation: Jacques Villeneuve was a part of these talks and conversations when he was at BAR… when that was all being formed, I think they wanted an American driver, somehow I got on the list, and we had a lot of discussions," added Gordon.

And sensing a lucrative PR coup for the sport, none other than F1 supremo Bernie Ecclestone also got involved in Gordon's discussions!

"He was involved yes, I had discussions with him and they were not long discussions, you know, but I think there was some talks about a big interest in an American driver. There always has been, right?"

In the end, Gordon said the talks never reached a decisive level where a concrete offer was put on the table from any party.
"It probably was, more than anything, did I have any money to bring to Formula 1 and did I want to be a Formula 1 driver?" he recalled.

"I sat down with Frank [Williams], I think he came to Indianapolis after that test for the actual race. I went and sat down and had coffee with them and we talked about it.

"It might have been a similar kind of probe. It really never got serious or went anywhere, and I really at that time didn’t expect it to because I was so established in NASCAR.

"Ten years or eight years prior to that, had that happened, it would have been different."

Vettel wondered 'who is next' after Baku tyre failures

Irvine: Hamilton 'the top driver' but Verstappen the 'ultimate talent'