Red Bull's Christian Horner said this weekend that if his team can beat Mercedes fair and square at Paul Ricard, then the bulls can beat the reigning world champions anywhere.

And the reason perhaps lies in the optimized balance of Red Bull's RB16B coupled with the car's straightline speed. Putting the two together adds up to a near perfect package as poleman Max Verstappen aptly demonstrated in qualifying.

Many deplore the presence of the chicane that splits Paul Ricard's long Mistral straight, but the venue still delivers reasonably big numbers when it comes to maximum velocity.

Verstappen clocked in at 328.7 km/h at the end of the first part of the Mistral straight when F1's main speed trap is situated this weekend.

It's been two years since F1 last raced at Paul Ricard, and the Dutchman's top speed was approximately 14 km/h slower than the fastest speed recorded in 2019, achieved back then by Renault's Daniel Ricciardo.

Comparing Red Bull and Mercedes, or rather Verstappen and Hamilton, the Briton was beaten by his championship rival by 0.258s in Q3, but only a small portion of that deficit was due to the 4 km/h difference in top speed between the two drivers.

Still, an edge is an edge, and Mercedes will perhaps need to get creative on the strategy front to put one over the raging bulls this afternoon.

But then again, there's always the unexpected... 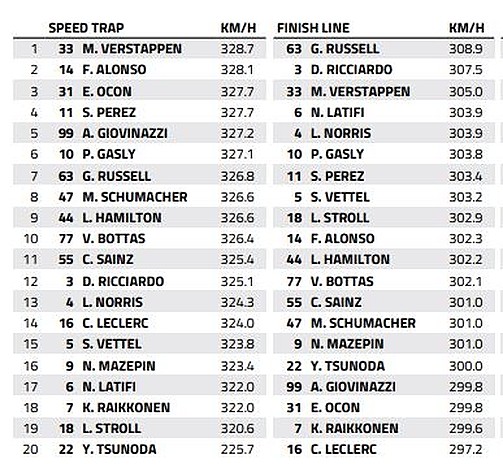