Lewis Hamilton took his 101st career Formula 1 pole position with Valtteri Bottas alongside him on the front row for tomorrow's Hungarian Grand Prix, after Mercedes appeared to play tactical games with their rivals heading into the final qualifying run on Saturday.

In a surprise development, Max Verstappen still start the race from third place on the soft compound rather than the expected mediums. He'll be alongside his Red Bull team mate Sergio Perez on the second row of the grid ahead of AlphaTauri's Pierre Gasly and McLaren's Lando Norris.

Charles Leclerc will line up in seventh place, but his Ferrari team mate Carlos Sainz was eliminated after crashing in Q2 and triggering a red flag. He will start from 15th place unless the overnight repairs incur further grid penalties.

While Saturday had initially got off to a cooler, cloudier start than Friday, things were already warming up by the time the cars came out for final practice, and by the start of qualifying it was once again sunny and hot, almost a match for the searing conditions that had caused such discomfort in practice although gusty winds were causing concern. With just fractions of a second separating the top runners, such details could prove crucial to the drivers as they headed out to get the session underway. 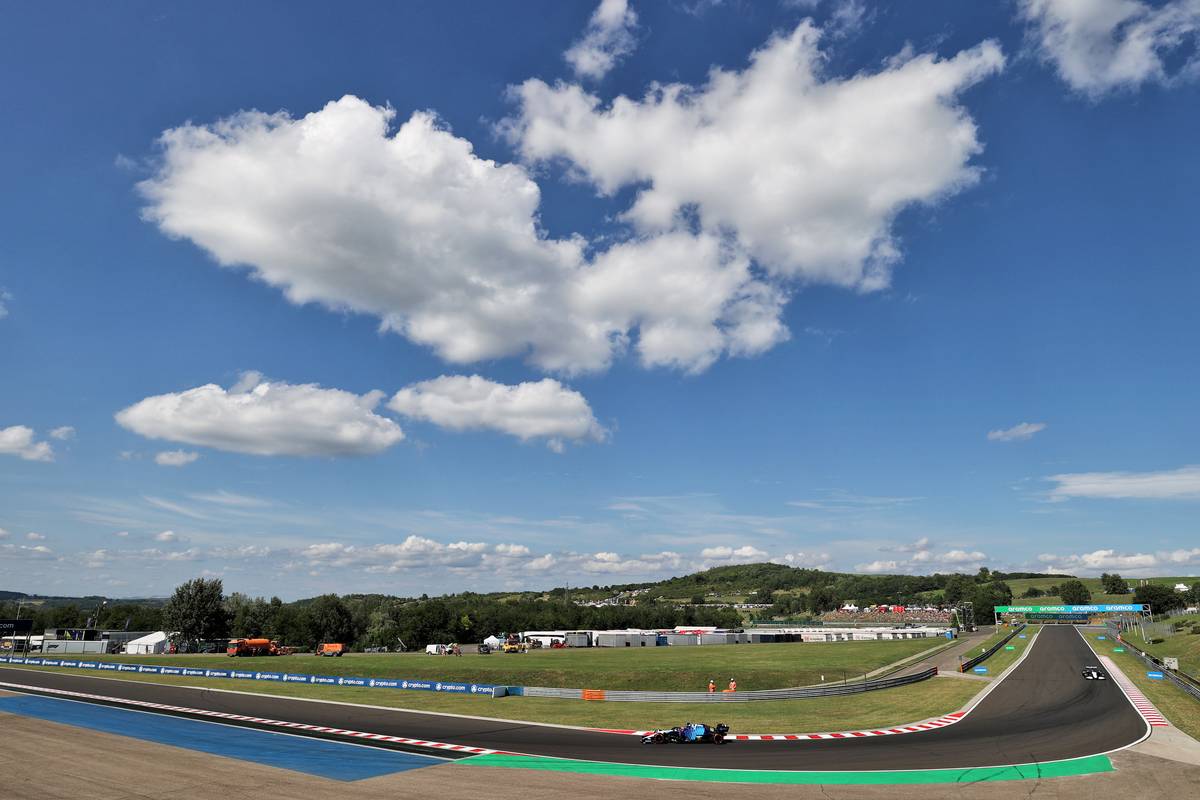 Q1: Verstappen quickest as Tsunoda and Russell miss the cut

Having missed most of Friday practice, Yuki Tsunoda was understandably keen to get started and was first to head out ahead of the Alfa Romeos of Antonio Giovinazzi and Kimi Raikkonen, all of them on softs. They were followed by Haas' Nikita Mazepin, whose team mate Mick Schumacher would took no part in the session after his car was badly damaged in an accident during FP3. Even if he had been able to take part, a five place penalty for a replacement gearbox would have made the matter academic and a back row start for tomorrow's race inevitable. Fortunately the 22-year-old had escaped unhurt from the accident and already passed fit to take part in tomorrow's Grand Prix.

Tsunoda set the initial pace with a time of 1:18.163s but this was soon bettered by Raikkonen by precisely two tenths as Giovinazzi slipped into second. The next batch of drivers to venture out included both Mercedes drivers and Max Verstappen, plus a full contingent from both Williams and McLaren. Valtteri Bottas soon took charge with a time of 1:16.610s and Hamilton improved on this by 0.186s to take the top spot, but this was quickly bettered by Verstappen going a fraction over two tenths quicker still.

Behind them, Pierre Gasly claimed a strong fourth to put him ahead of Lando Norris and Daniel Ricciardo with his first run. Sergio Perez debuted in sixth to split the two McLarens, but was then bumped down by Fernando Alonso. Ferrari were next in action, Carlos Sainz going fourth fastest despite inadvertently blocking Tsunoda's second run as he came out of pit lane ahead of the Japanese rookie, while Charles Leclerc was quick enough for seventh.

Going into the final push laps, Tsunoda had been left in the drop zone along with George Russell, Nicholas Latifi and Nikita Mazepin. None of them were able to do anything to avoid elimination, a particular surprise for Russell who up to now had successfully made the cut at the end of Q1 for all ten races so far this season. Giovinazzi was the driver to squeak through in 15th, with Ricciardo also cutting it fine in 14th. 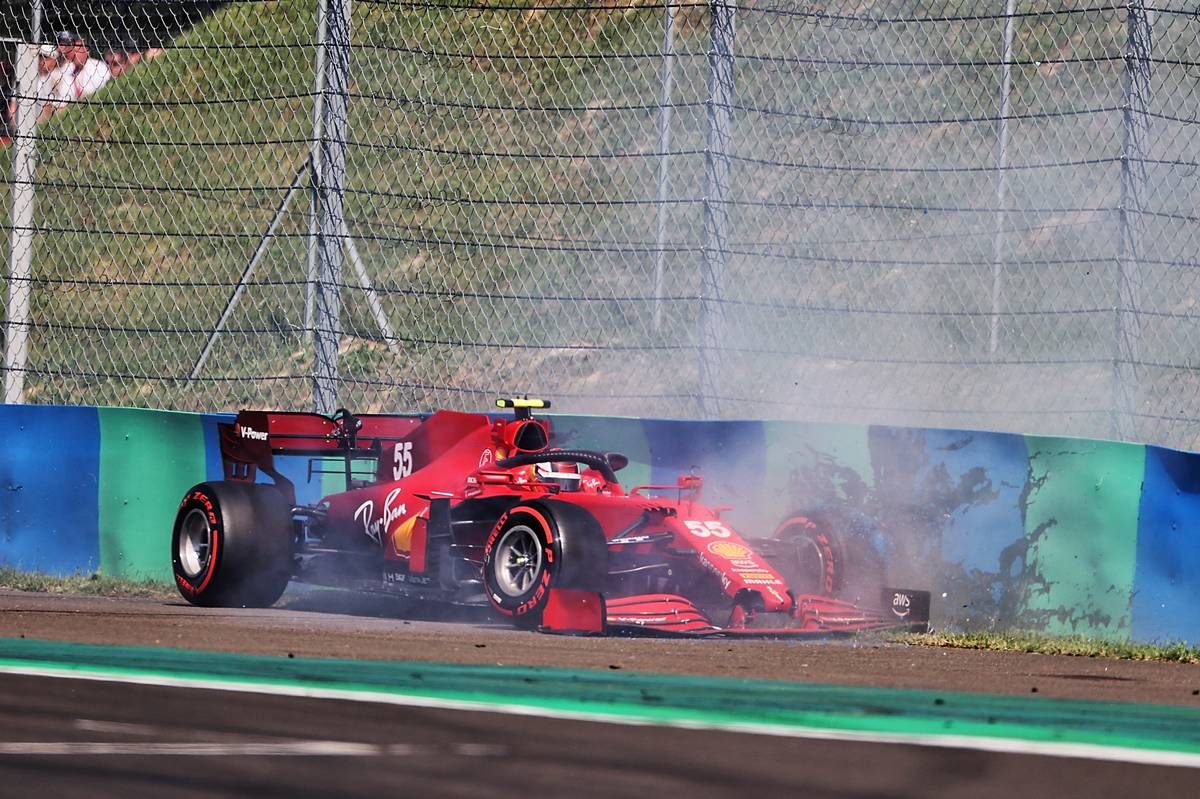 When the second round got underway after a slight pause even after the lights went green on pit lane, the top runners opted to head out on medium tyres as the preferred compound on which to start tomorrow's race. No one else felt secure on their pace and duly opted to play safe on the faster soft rubber.

Hamilton drew first blood with an initial time of 1:16.553s, two tenths quicker than Verstappen. Bottas was a further three tenths back in third with Perez looking commendably swift just a tenth behind. But the soft compound then enabled Alonso to go fourth ahead of Sebastian Vettel and Pierre Gasly, shuffling Bottas and Perez backwards. Even better was Leclerc who slotted into second, only for his team mate Sainz to oversteer through the final corner on his first flying lap and hit the barrier sideways-on. The impact dislodged his front wing which went under the car and prevented him crawling back to pit lane under his own power, forcing a red flag with six minutes and 40 seconds remaining on the clock.

Those now at risk of missing the cut were Norris, Stroll, Raikkonen and Giovinazzi with Sainz himself obviously out of contention. However things were also looking very tight for the likes of Bottas, Perez, Ocon and Ricciardo should any of those currently behind them find extra pace when the session restarted.

Even when the track reopened for business, the teams held back until the optimal moment before sending their cars out for their final runs ensuring a congested track. Only Bottas was still on the mediums, with Hamilton and Verstappen both switching to softs. While it was just a precaution on the part of Hamilton, Verstappen actually improved on his earlier time meaning he will be starting the race on the red-walled compound - as would Perez, who was also safely through in fourth. Of the rest, there were better laps on the softs that saw Norris finish the session in second, Gasly third and Alonso fifth, with Hamilton's original time remaining good enough for sixth ahead of Leclerc, Bottas, Ocon and Vettel.

Missing the cut and failing to progress to the final top ten pole shoot-out round were Ricciardo, Stroll, Raikkonen and Giovinazzi, together with the sidelined Sainz. 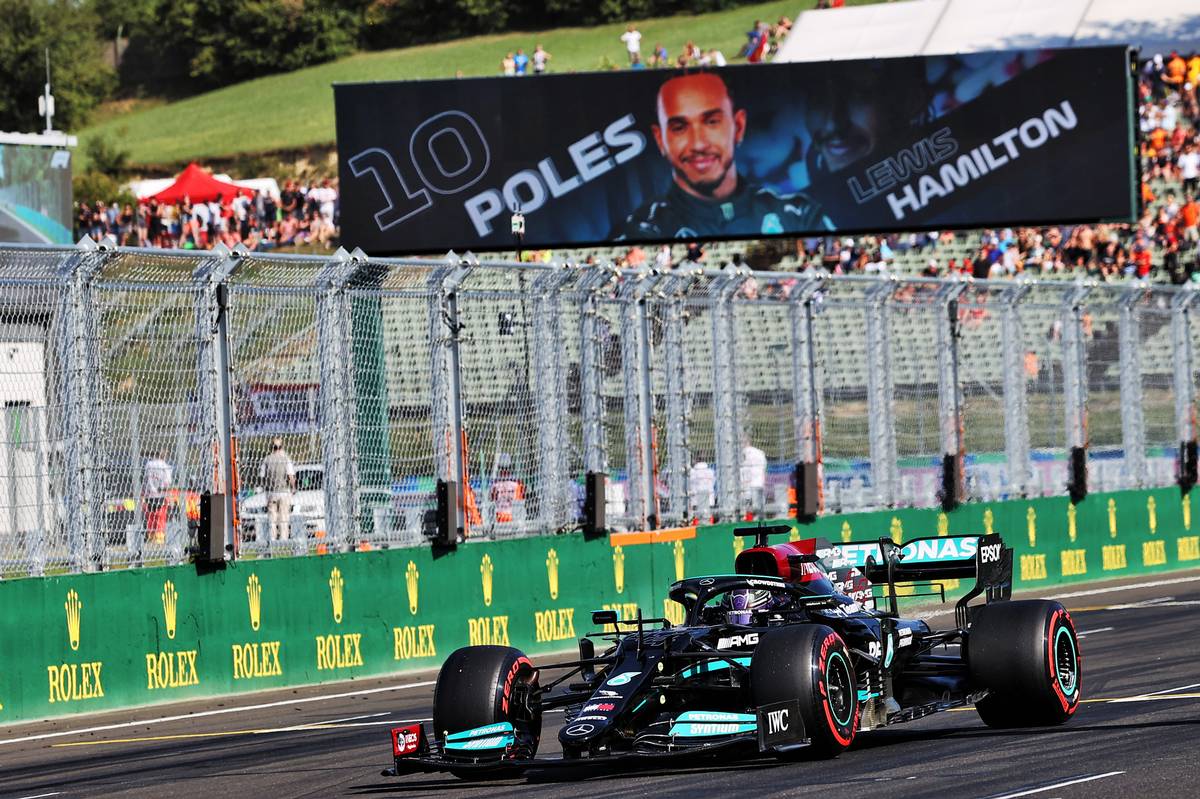 Whatever the repercussions of Red Bull's late switch to the soft tyres to start tomorrow's race, these were secondary concerns when the lights went green for Q3 and it was down to a pure speed trial on the soft compound.

Vettel and Norris had both used four sets of the soft compound to get them through to this point leaving Vettel sitting out the early minutes of the final round and Norris initially heading out on a set of used tyres. Hamilton had no such concerns and went top with a time of 1:15.419s which was three tenths quicker than Bottas, with Verstappen over half a second off his title rival's pace after a scrappy first attempt. Perez was nearly another half second behind in fourth, with Leclerc in fifth followed by Ocon, Gasly and Alonso, with Norris ninth.

Vettel made use of the ensuing lull to take advantage of the empty track, but his time was only good enough for a provisional eighth place. He headed back to pit lane as the rest of the field took centre stage. Running on track behind the midfield cars, Bottas led the leaders to the start line to begin his final run but then appeared to slow up, backing Hamilton up into Verstappen and Perez. All four seemed to lose speed as a result of the shenanigans with Hamilton even locking up in the final corner, while the delay meant that Perez actually failed to reach the line before the chequered flag came out.

Hamilton's earlier effort proved good enough to secure pole with Bottas holding on to second even in the face of a slight improvement from Verstappen. Despite not getting a final run, Perez will start from fourth with Gasly improving to fifth ahead of Norris, Leclerc, Ocon and Alonso as Vettel dropped back to tenth by the time the dust settled on a controversial end to the afternoon.

Hamilton fired up after getting booed in Hungary