Lewis Hamilton says he trusted the Mercedes team's forecast for rain for the second standing start of Sunday's Hungarian Grand Prix, which led to his decision not to pit for a set of slick tyres, contrary to the entire field behind him.

After the race was suspended following a multi-car pileup at the first corner triggered by Valtteri Bottas, everyone regrouped.

But as the field headed out for its formation lap - led by Hamilton -ahead of the race's restart, conditions warranted a change to dry tyres.

Every driver except for Hamilton thus pulled into the pitlane at the end of the formation lap, a move that led to the unusual sight of the seven-time world champion sitting on his own on the grid, and on the wrong tyres as it were! 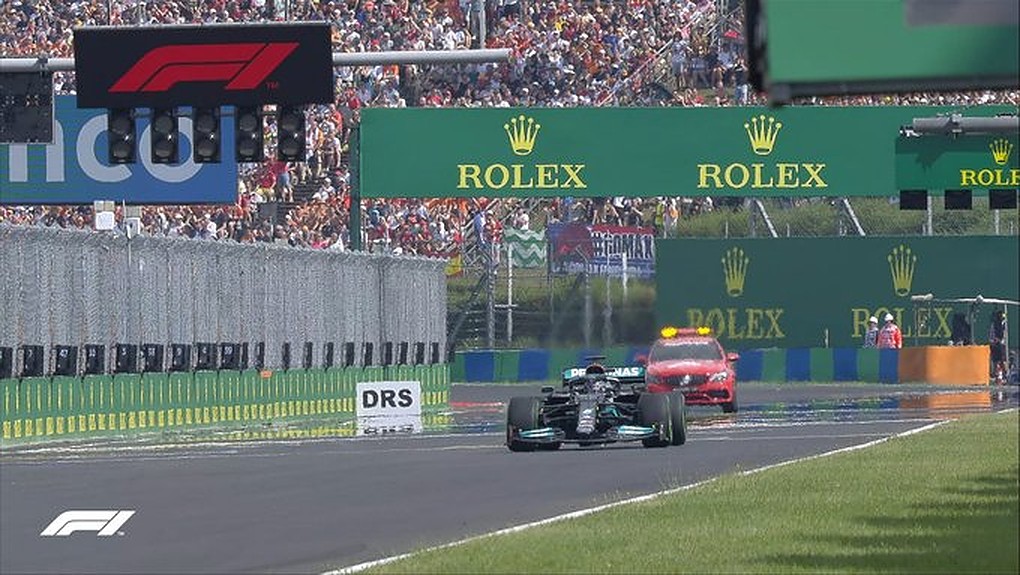 "I was telling the team how the track was through the lap, but they said the rain was coming, when we got in the car, so I thought they had other information and I saw everyone diving in."

Hamilton was left with no choice but to pit for slick tyres, relinquishing his lead and setting himself up for a chase from behind and a difficult afternoon, but one that yielded a productive P3 spot on the podium.

However, the Briton paid a heavy tribute to his efforts, suffering from dizziness and dehydration on the podium.

"Today was definitely tough," he admitted. "We always make it difficult for ourselves and crazy to think we were the only ones on the grid at the start but these things happen and we learn from them.

"I gave it everything and I had nothing left at the end."

When all was said and done, Hamilton was quick to congratulate first time winner Esteban Ocon for his outstanding win.

"Huge congratulations to the Alpine team and to Ocon," said the Mercedes driver. "He’s been a shining star for some time now so it’s been a long time coming and I’m really, really happy for him.

"It’s great to see Aston Martin up there, their best result so far and I know there’s more to come."

'What a moment!' - Ocon jubilant after Hungary victory

Verstappen rues being 'again taken out by a Mercedes'