Pirelli says that Zandvoort's new banking did not require the company to modify the structure of its F1 tyres, as their current construction suits the demands imposed by the fast inclined corner.

The 18-degree flat out sweep that leads back on to Zandvoort's main straight is a spectacular feature of this weekend's Dutch Grand Prix.

Pirelli initially feared that the extra loads would require changes to the construction of its tyres, but the overall structural modifications to all its rubber undertaken ahead of the 2020 season proved sufficient for its product to cope with the characteristics of the new Arie Luyendyk Corner.

"At the beginning of 2020, when Zandvoort was in the calendar for the first time, we had a very preliminary simulation," explained Pirelli F1 boss Mario Isola said.

"The teams were not sure about what was going to happen. The track was not finalised yet, they were working on the two corners and most of the circuit.

"And now I believe we have much better information and we have a better product. So for these two reasons, we don't need to have any different construction in Zandvoort."

When Zandvoort first revealed its plans to change the design of the final right-hand sweep, F1 teams were wary of the idea, remembering how the banking at Indianapolis had wreaked havoc on Michelin's tyres at the US Gran Prix in 2005.

While Zandvoort's banked curves do put Pirelli's tyres to the task, Isola says corners at other tracks share the same level of severity. 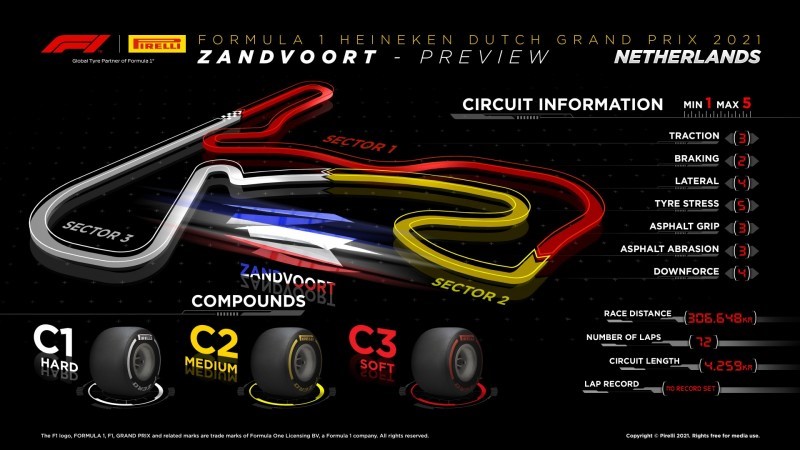 "The prescriptions are not crazy, and are in line with other high severity circuits, both in terms of camber and the minimum starting pressure," added the Italian.

"That is what we have seen from simulations, it is clear that the tyres in the two corners with banking are loaded more compared to a flat corner.

"But then we see the absolute numbers, and we have other circuits with such level of severity.

"So, for example we have Silverstone that is more severe, we have also Spa that is more severe. The corners with banking are only two, let's say one and a half, because one is very, very short. So it's affecting the prescription, but not completely making a revolution of that."