Lewis Hamilton continued to look very much in charge of proceedings at Istanbul Park, as he topped the times at the end of second practice for the 2021 Turkish Grand Prix.

Hamilton was 0.166s ahead of Ferrari's Charles Leclerc followed by his own Mercedes team mate Valtteri Bottas, and also enjoyed a strong edge over the other drivers when it came to longer distance runs in race trim.

A largely incident-free hour-long session saw a subdued run from Red Bull with Sergio Perez edging Max Verstappen to fourth as the Dutch driver struggled to find the optimum balance for his RB16B.

It had been a brisk start to the weekend in a low-key, straightforward start to the weekend in Friday morning practice which saw Lewis Hamilton break the track record for Istanbul Park and go four tenths quicker than his main title rival Max Verstappen, albeit in the knowledge that he would have a ten place grid spot drop for Sunday's start after electing to take a new ICE. With conditions unchanged after lunch, the question was whether the Mercedes driver would be able to maintain that momentum into FP2. 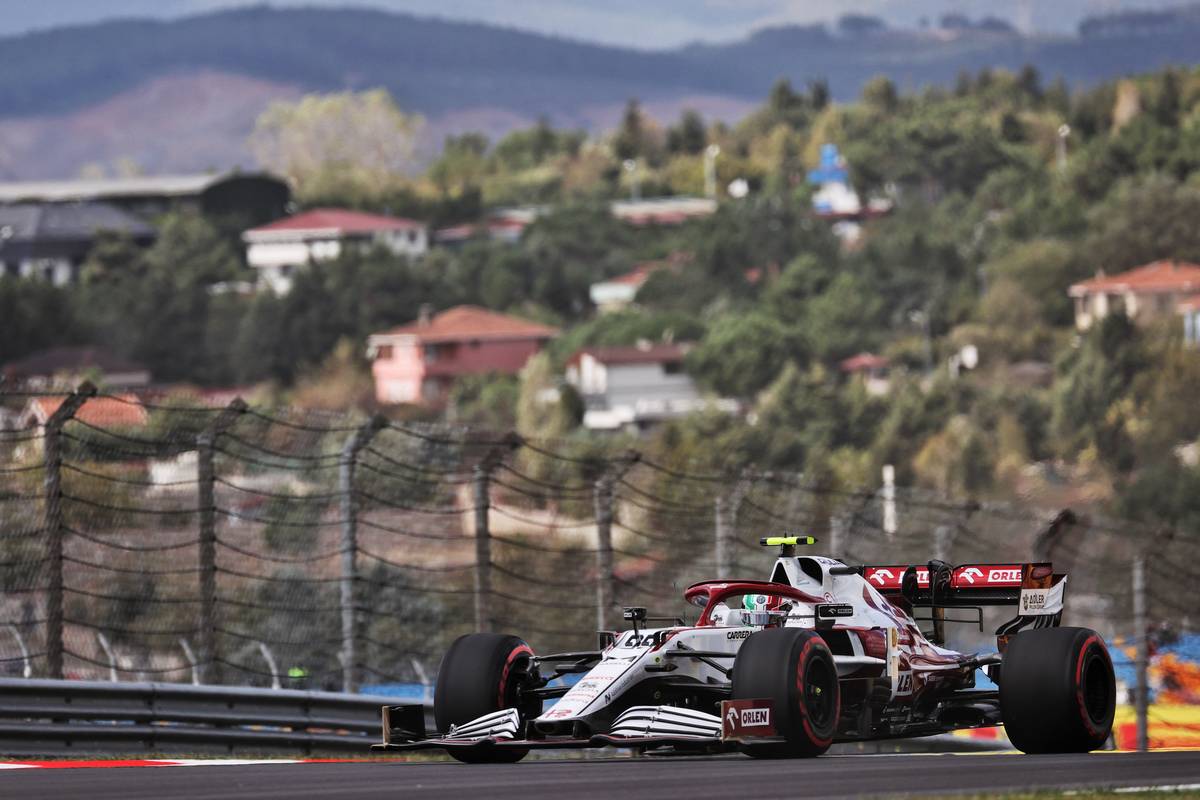 Alfa Romeo's Antonio Giovinazzi was first to break cover and head out on track but he wasn't on his own for long, as the drivers and teams were once again keen to get as many laps in the books as possible given how different the circuit was from last year's event. The Red Bulls were soon top with Sergio Perez heading the early times with a 1:25.278s, a third of a second quicker than his team mate Verstappen as both started their session on the medium tyres.

A log jam at turn 12 caused by Aston Martin's Lance Stroll coming to a near halt in readiness for starting a timed run meant that Hamilton had to abort his first flying lap and return to pit lane, still not entirely happy with the handling of the Mercedes. The chicane also saw a harmless spin for Nicholas Latifi, the Williams soon able to recover and get back underway without interfering with the running of the session.

Ferrari's Charles Leclerc soon set a new benchmark but was soon displaced by Perez improving to 1:24.985s which proved one thousandth of a second quicker than Hamilton whose next run was a rare dead heat with team mate Valtteri Bottas. Leclerc then moved the goalposts once more with a new benchmark of 1:24.102s, and Lando Norris popped into second despite running the nominally slower hard tyres. Verstappen had been pushed back to sixth by this point, complaining about snaps of mid-corner oversteer. 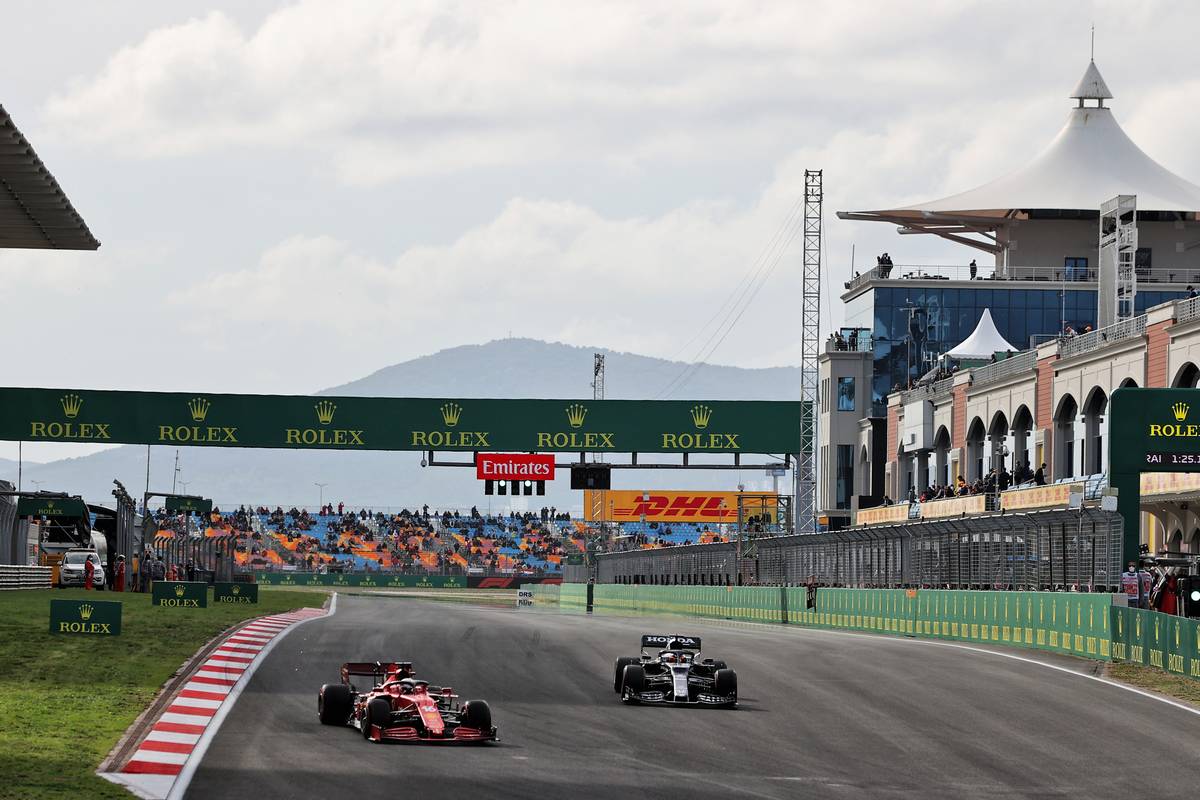 Both Mercedes drivers improved on their next runs but not by enough to catch Leclerc. Drivers then started to try out the soft compound tyres but there was no instant dramatic improvements on the timing screens with Leclerc still in charge based on his earlier time. Further back, Carlos Sainz and Fernando Alonso edged up to sixth and seventh respectively followed by Verstappen, Lance Stroll and Pierre Gasly.

Norris' first run on the softs offered the promise of a small tow to Bottas, but the McLaren cut across the apex in the middle sector curtailing both drivers' endeavours. Meanwhile Hamilton did find enough extra pace to take the top spot with a time of 1:23.804s, three tenths quicker than Leclerc and Bottas. Perez was still showing good pace in fourth putting him well in front of Verstappen and Norris, with a strong lap from Yuki Tsunoda putting the AlphaTauri in seventh ahead of Sainz and Gasly before Giovinazzi was able to jump into the frame just ahead of the Japanese rookie.

More drivers were struggling at turn 9 with frisky tailwinds contributing to both Leclerc and Tsunoda overshooting the corner. Leclerc's next run was more successful and he closed up to Hamilton at the top of the timesheets, although not by enough to regain the initiative. That signalled the end of the soft compound qualifying laps and teams returned their focus to longer distance runs with 20 minutes remaining on the clock. 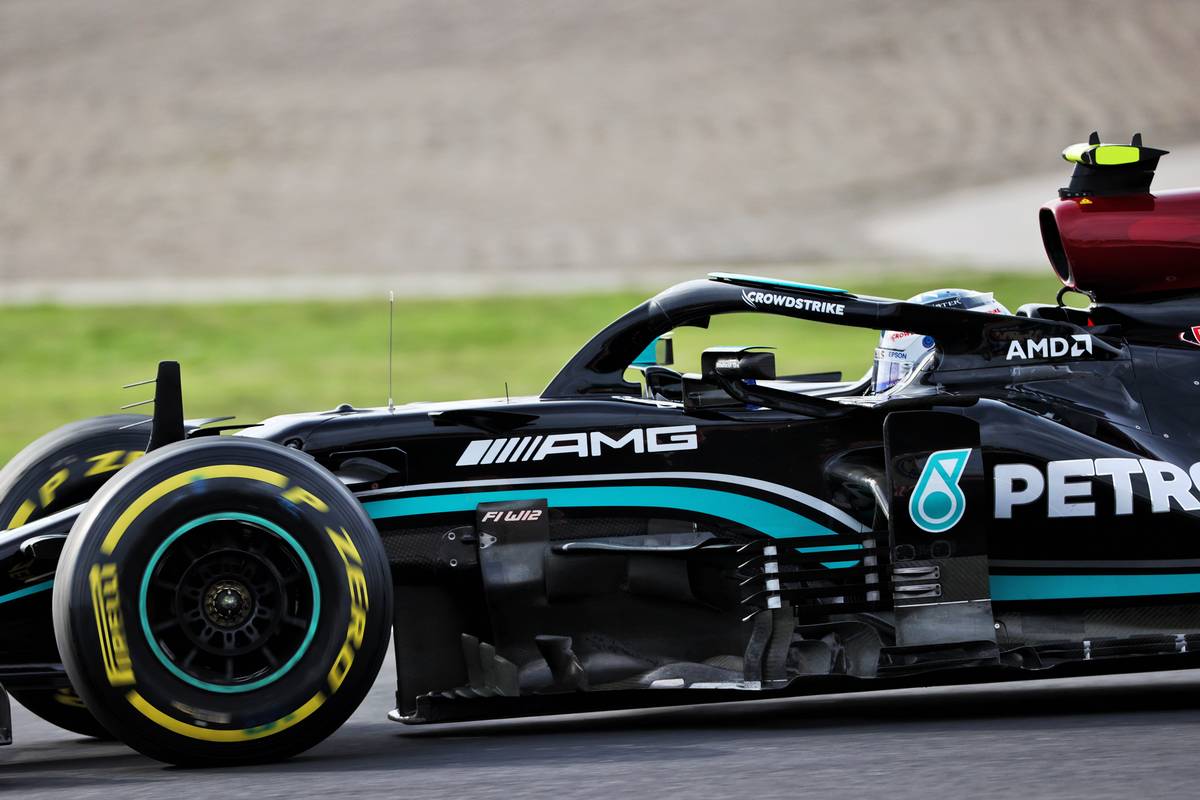 Even in race trim on the medium tyres, Bottas was still struggling to keep the Mercedes on the track at turn 1 as he tried out some late-braking strategies for the start of Sunday's race. Gasly was also pushing, resulting in a spin as he exited turn 5 having previously declared to the AlphaTauri pit wall that "My arms are too short to turn the wheel!" after finding that understeer meant he was struggling to navigate some of the corners.

The most entertaining exchange between driver and pit wall was over at Alfa Romeo, with Kimi Raikkonen reporting that his drinks system was "leaking like f***" resulting in the cockpit becoming awash with water and castigated the team by pointing out that it was "the most simple part of the car and we can't fix it".

When the chequered flag came out it was Hamilton on top for the second time today followed by Leclerc, Bottas, Pere, Verstappen and Norris, with Alpine pair Alonso and Esteban Ocon looking strong in seventh and eighth ahead of Gasly and Giovinazzi. Tsunoda had been pushed out of the top ten ahead of Sainz and Stroll. Daniel Ricciardo struggled to get a clean quick lap in the books and ended up 14th ahead of Raikkonen, Sebastian Vettel and Williams duo Latifi and George Russell. Haas were slowest of all, with Mick Schumacher two tenths quicker than Nikita Mazepin.

The drivers then took the opportunity to conduct practice starts on the grid, but Ocon hit a problem and was left marooned in the middle of the track waving for assistance. It's unlikely to be a major issue, and the team will look into it overnight.