Sergio Perez was particularly delighted to be celebrating a return to the podium in Turkey on Sunday, after a recent string of unlucky races had left him feeling frustrated and thwarted.

Perez clinched his maiden win with Red Bull in Azerbaijan, and followed that with a podium in France, but since then he's come annoyingly close but no cigar.

In Italy he finished the race in third place only to be handed a five second penalty for leaving the track and gaining an advantage, meaning he ended up classified in fifth. And in Russia he was in the running for a podium when the late rain caused him to spin.

"It has been a while since I have been up there, I think the last two or three races we should have been on the podium, but we have been so unlucky," Perez told the media after the end of the Turkish Grand Prix at Istanbul Park.

"It's been coming already for many races," he said. "In Monza I finished on the podium but I had the penalty. In Russia with three laps to go, I was on the podium [but spun].

"But certainly it's nice, especially in a race like today where I felt so uncomfortable with the car," he continued. "We didn't have quite the pace to match the Mercedes [but] I feel like we maximised our result today.

“This podium is very special because it was not an easy race for me, it was hard and exhausting at times, so I am very happy this evening.

"I got a good start, I think there was some contact between Fernando [Alonso] and Pierre [Gasly] into turn one so there were three cars, including me. I thought we weren’t going to make it, but in the end it was a good result for me."

Perez played a crucial role in stopping Lewis Hamilton from charging his way to the front after serving his ten place grid penalty. A late stop for fresh inters also had to be carefully timed to get the most benefit over Hamilton and Charles Leclerc. 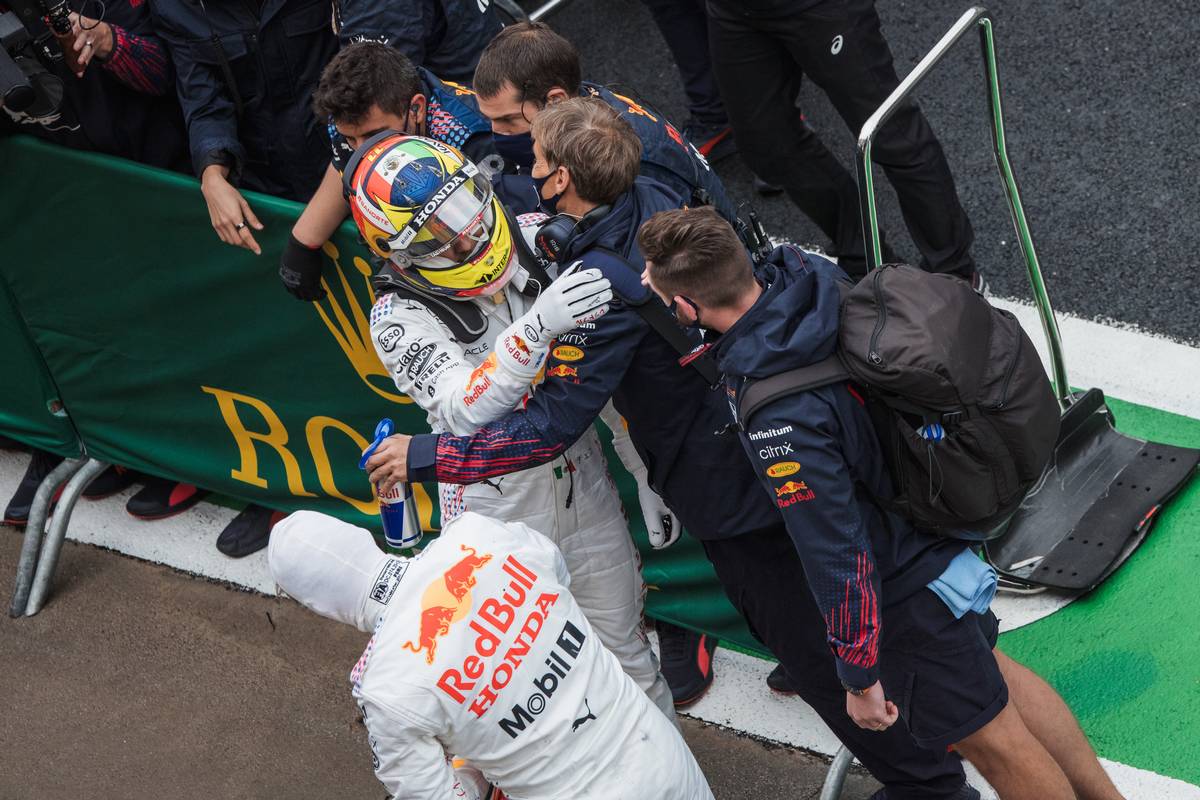 "It was the right call when we pitted," he insisted. "I had the time to really introduce my tyres and really learn what went wrong on my first stint to try to apply it for my second.

"I didn’t feel comfortable in the first stint with the car and I lost a lot of ground, but then the second stint was all about pushing at the right time and using my experience to get a podium for the team.

"I think we took a good advantage on that second stint," he added. "It really made my race. Lewis was closing in really fast and at that time I was struggling quite a lot with my tyres, he had good pace and I thought he might get past me but it turned into a good fight and I came out on top."

And finishing on the podium alongside Max Verstappen also means the team scored crucial points in the constructors championship.

"I'm sure that if we are able to do that for the next six races we can still win this championship," Perez predicted. "There is a lot we can learn from this race, it is a good result for the team and now we’re looking forward to Austin.”

Even so, a win for Valtteri Bottas and fifth for Hamilton means that Mercedes has actually slightly extended their lead in the standings by three points, while Verstappen is back on top in the drivers' title battle.

Horner never doubted Hamilton would have to pit