In the commotion of the opening lap dive into Istanbul Park's Turn 1, Gasly was sandwiched between Alonso on his right and Red Bull's Sergio Perez on his left.

As the trio negotiated the corner side-by-side, the Frenchman drifted a bit away from Perez but in doing so made contact with Alonso and nudged the Alpine driver into a spin.

The incident was immediately investigated by the stewards who handed a five-second time penalty to Gasly and two penalty points.

It was a harsh sanction by any measure, although FIA race director Michael Masi later explained that Gasly was "wholly to blame" for the contact that justified the penalty. 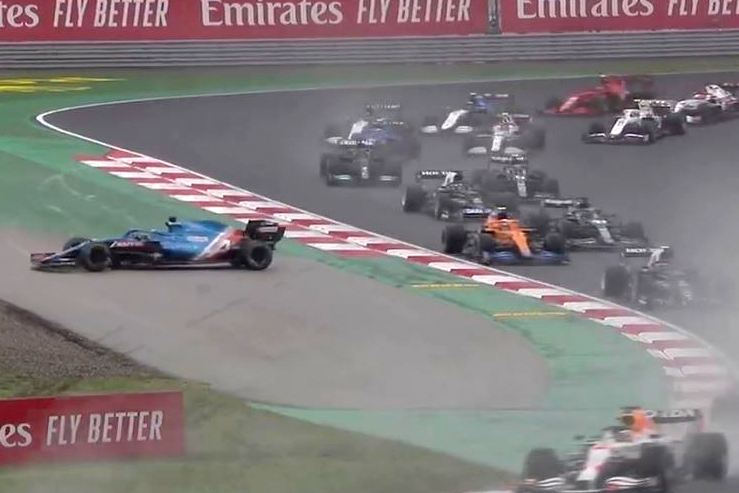 "One of the things if we go back to the start of the year, if you recall, pre the first event was that following discussions with the drivers and the teams is that we had to sort of ratchet back a little bit the let them race principles in general," said Masi after last Sunday's race.

"And one of them was first-lap incidents, and that if a driver was wholly to blame for an incident, then it would likely result in a penalty."

But looking from the outside, Albon was adamant that no punishment should have been levied upon Gasly.

"No way, not to me," he said on F1's official YouTube channel.

"To me, that’s as much ‘let them race’ as it gets, in a sense that Checo’s had a good start and he’s put his nose in, as he’s entitled to do.

"Pierre gives him the space. Obviously, gets sandwiched, as he says on the radio, but more than anything, I don’t know what the stewards expected Pierre to do.

"The only thing I could say or think that they think about, is that he left a bit too much space in between himself and Checo.

"But honestly, in these conditions, when you do have a car coming in on the inside like that, you’re not going to give them the exact car width.

"You’re going to give them a car width and a little bit more."