Mercedes drivers Lewis Hamilton and Valtteri Bottas remained top of the times in second practice for the Saudi Arabian Grand Prix in Jeddah, with AlphaTauri's Pierre Gasly close behind for AlphaTauri under the floodlights.

Max Verstappen remained in touch in fourth place ahead of Alpine pair Fernando Alonso and Esteban Ocon, but his Red Bull team mate Sergio Perez still finding it hard to match the pace of the leaders as he ended the day in eighth.

Traffic proved to be the biggest headache for the drivers with the session running uninterrupted until the final few minutes, when the session was prematurely red-flagged after a heavy solo accident for Ferrari's Charles Leclerc. 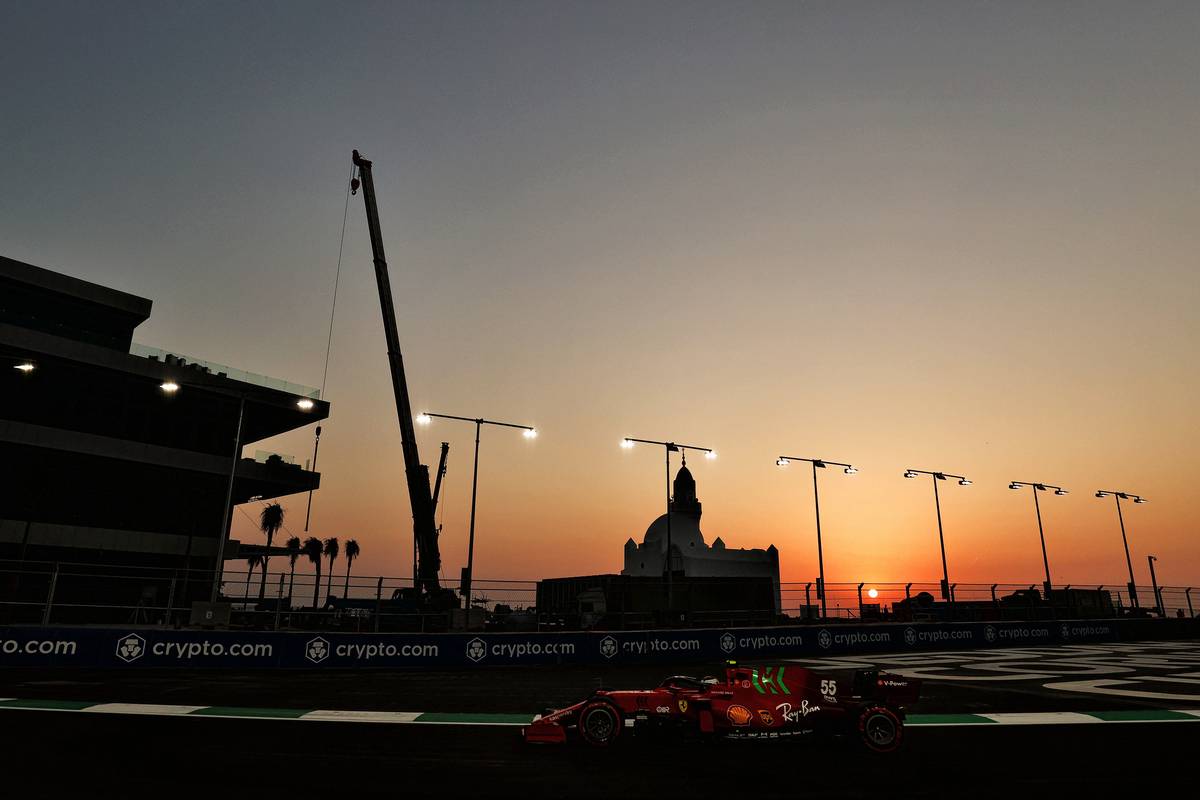 The drivers had already had a first getting-to-know you opportunity with the brand new Jeddah Corniche Circuit in the late afternoon sunshine, with the usual names of Lewis Hamilton, Max Verstappen and Valtteri Bottas quickly assuming control of the timesheets. There had also been a surprisingly swift Antonio Giovinazzi in fifth for Alfa Romeo, and a strangely sluggish Sergio Perez ending up 11th for Red Bull after what had proved to be a notably incident-free hour-long session.

But in many ways all that was immediately irrelevant, as it had taken place in daylight conditions very unlike those that everyone would experience in tomorrow's qualifying session and Sunday's race. It was only with the sun having set and the circuit floodlights taking over that things got more serious and meaningful with the start of Friday evening's Free Practice 2.

First out on track was Carlos Sainz, sporting a set of hard tyres on his Ferrari. He was briefly top but Alpine's Esteban Ocon soon went 1.28s ahead with quicker times also coming from Fernando Alonso, Daniel Ricciardo, Lance Stroll, Sebastian Vettel and Pierre Gasly as everyone quickly got down to work. Best of the first flurry of fastest laps was McLaren's Lando Norris who recorded a time of 1:30.771s on soft tyres to put him a quarter of a second quicker than Lewis Hamilton and Sergio Perez. 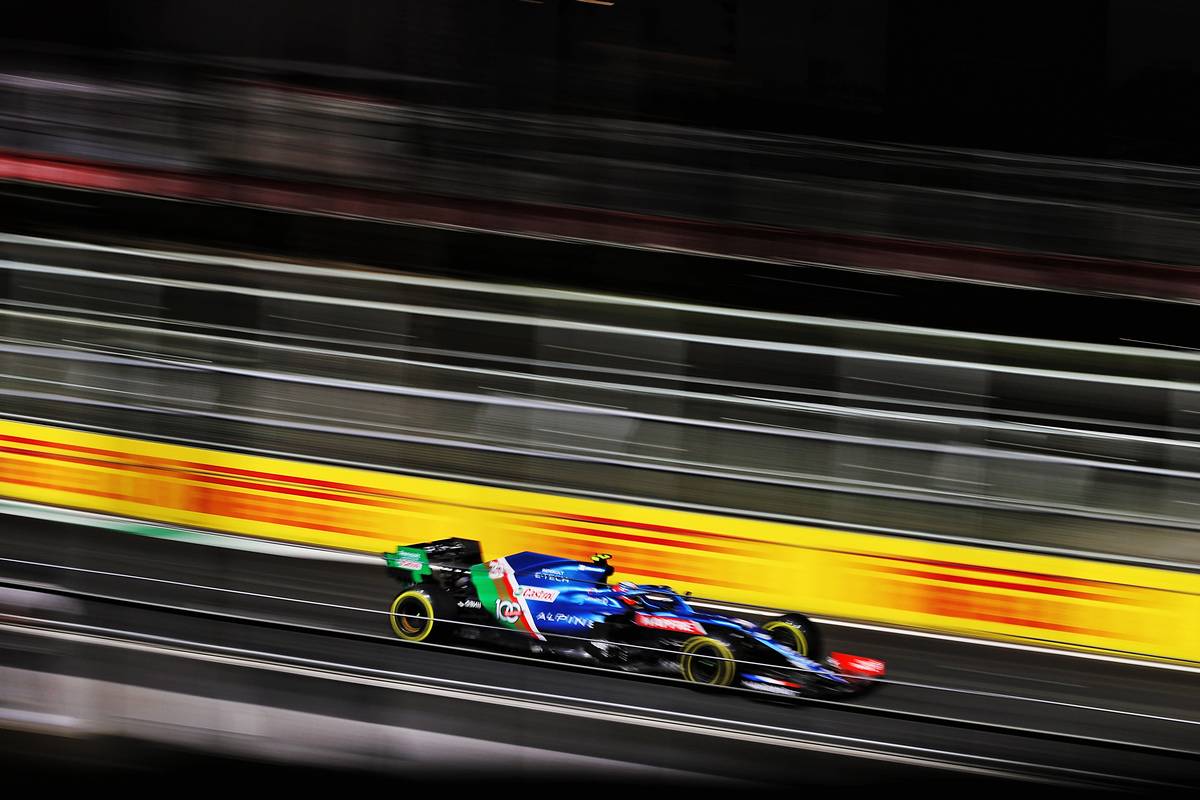 Max Verstappen moved the goalposts a further two thirds of second down the road with his subsequent first flier, with improved laps following from Ocon, Ricciardo and Sainz pushing Norris down to fifth. Charles Leclerc then got within a tenth of a second of Verstappen with his latest push lap as the times continued to tumble, the Red Bull driver responding by shaving a further four tenths off with his next run clocking in at 1:29.706s followed by Leclerc, Sainz, Alonso, Hamilton, Ocon, Norris and Perez in eighth.

AlphaTauri's Yuki Tsunoda put in a strong lap on hard tyres to briefly go top, before another push from Verstappen on mediums was quickly followed by the best yet from the similarly-shod Bottas that was enough to put the Finn quickest by two tenths with a time of 1:29.079s, before his Mercedes team mate then pipped him by 0.061s. At the other end of the times, George Russell was able to move up to 17th ahead of Nicholas Latifi and the two Haas cars despite having reported a brake-by-wire issue on the Williams, which fortunately self-corrected in time without the need for a visit to the team garage.

A general move to the soft compound just before the half hour mark signalled the start of qualifying-type speed trials, but traffic was increasingly proving an issue. It prevented both Mercedes drivers from improving at the front, with only Ricciardo having a clean run to ninth and Alonso springing up to fourth. Pierre Gasly was also able to make inroads into the top ten, but otherwise there was surprisingly little change before drivers headed back to pit lane to take on more durable tyres for high fuel load runs to finish off the evening. 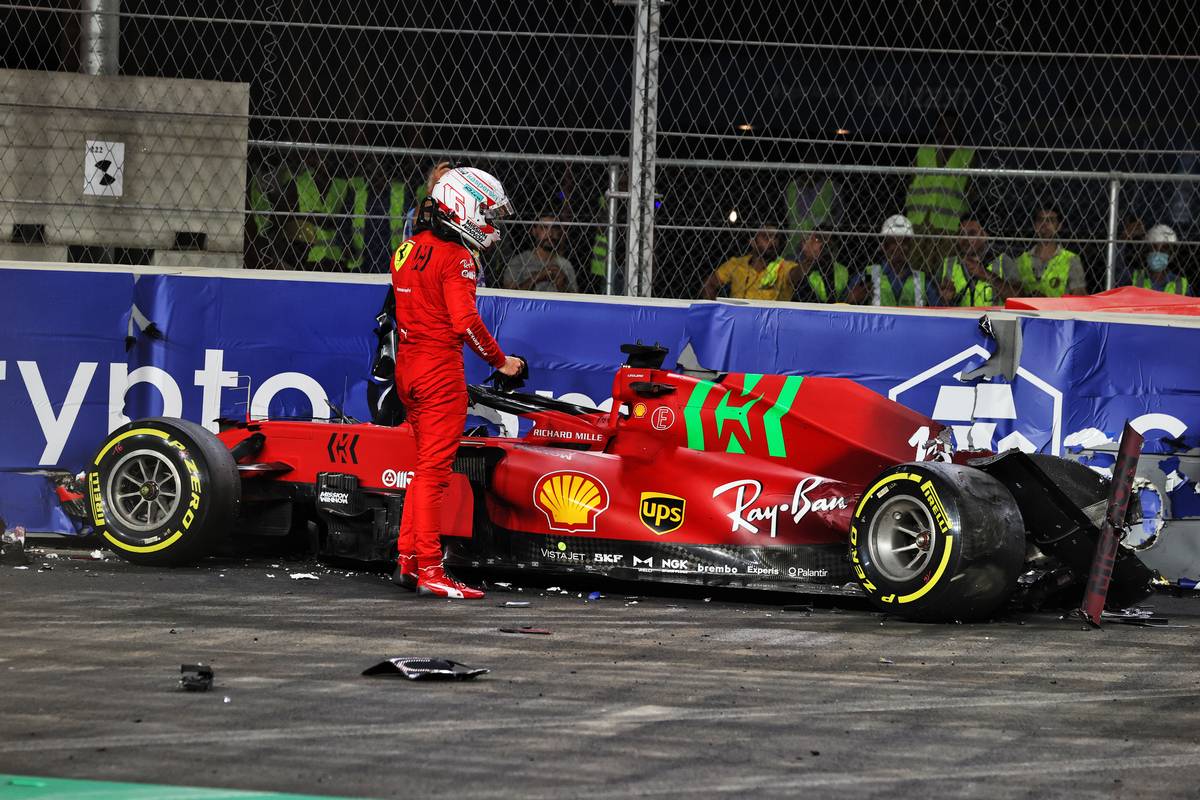 It meant that Hamilton's previous run of 1:29.018s remained top of the timing screens ahead of Bottas and Gasly all within a tenth of each other, followed by Verstappen, Alonso and Ocon. Sainz improved to sixth ahead of Tsunoda whose early effort remained good enough for seventh ahead of Perez and Leclerc. That pushed McLaren's Ricciardo and Norris out of the top ten, followed by Alfa Romeo pair Giovinazzi and Kimi Raikkonen and the Aston Martins of Stroll and Vettel.

The session was without significant incident until the final ten minutes, with Nikita Mazepin spinning while accelerating out of turn 2 with ten minutes remaining, fortunately without collecting Hamilton or doing any harm to his Haas in the process. However a few minutes later there was a much bigger accident for Leclerc when the Ferrari took too much kerb and spun at the apex of turn 23 sending him backwards into a heavy hit with the concrete wall that inflicted major damage to the car.

Fortunately Leclerc signalled he was okay and was able to climb out of the car, while red flags signalled an early end to the evening's track activity.