Sainz was in fourth position when the safety car was deployed with five laps to go following Nicholas Latifi's crash at Yas Marina's Turn 14.

However, the Ferrari driver was tenth in line behind the safety car ahead of the race's restart.

A train of five lapped cars positioned between race leader Lewis Hamilton and second-placed Max Verstappen were waved through, but behind the Dutchman, the lapped cars of Daniel Ricciardo and Lance Stroll, who were followed by Sainz, were ordered to remain behind Verstappen.

"It was certainly a very strange situation for me," said Sainz. "Because I was obviously battling for a podium with Valtteri [Bottas] and some AlphaTauris behind with a medium tyre, while I was on a very used hard.

"At the beginning I was told they were not going to be allowed to unlap themselves, the people in front of me. 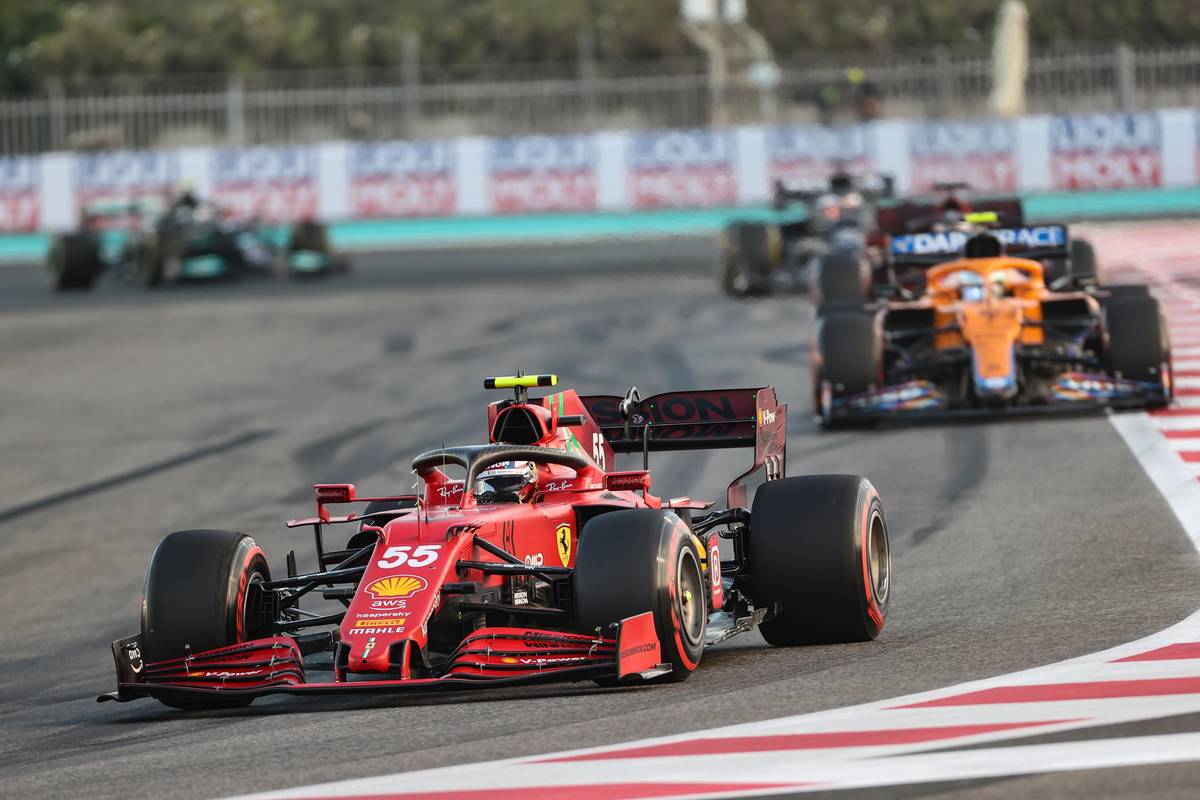 "Then it was decided to unlap themselves, and some people unlapped themselves, but there was still, I think it was an Aston Martin and a McLaren of Ricciardo, between the two leaders and myself.

"And this I’ve never had before, having to restart the race with these two guys in front of me, and while fighting for a P3.

"So I do believe it was a strange one, and maybe something to look at because it was very strange to see, and it nearly cost me my podium, to be honest."

On the final lap, when everyone was released, Sainz charged to the chequered flag but with AlphaTauri's Yuki Tsunoda snapping at his heels.

The Spaniard nevertheless snatched his fourth podium of the season, but with just 0.519s in hand over his impressive Japanese rival.

"It’s truly a great way to end a very positive first year in Ferrari for me," said a delighted Sainz. "A very challenging year but in the end, it turned out to be a very strong one.

"A year that I’m quite proud of and yeah, to finish it with a podium that probably no-one will remember – I’ll add it to the collection – because of whatever was happening in front.

"I enjoyed it a lot and put together everything that I have learned through this first year to put probably my strongest race in Ferrari together."

"It’s not like finishing fifth, sixth or seventh in the championship today would have changed my mood going into the winter break," he commented.

"Especially the way it finished in this last third, just gives me a lot of confidence going into 2022, for whatever happens and whatever car Ferrari and I have, we will go for it, because my confidence is high."

Latifi 'sorry' for crash and unintended impact on title battle