A return to Qatar and a Singapore double-header are reportedly being considered by F1 as potential replacements for the cancelled Russian Grand Prix.

Sochi lost its spot on the sport's 2022 calendar following Russia's invasion of Ukraine, with F1 terminating its contract with the country's race promoter.

Qatar's Losail International Circuit - which signed a long-term deal with F1 and where the sport raced for the first-time last year - does not figure on this year's calendar as the peninsular country is hosting the FIFA World Cup.

But it recently emerged as possible venue to host a race in late September – over a month before the start of Qatar's World Cup - that would initiate a Qatar-Singapore-Japan triple-header.

However, as a second option F1 is also considering running two races on consecutive weekends at Singapore's Marina Bay Street Circuit, with different starting times for the pair of events.

A return to Bahrain's outer loop has also been earmarked as a possible replacement event.

Melbourne Speed Trap: Who is the fastest of them all? 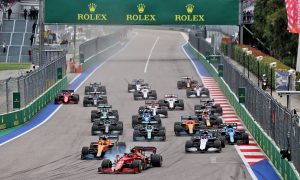