Moto GP world champion Fabio Quartararo says he hopes to enjoy a track day with the Mercedes F1 team at the end of the 2022 season.

The French rider who won the MotoGP title with Yamaha last year was a guest of Mercedes at last month's French Grand Prix at Paul Ricard, the 23-year-old sharing Petronas and Monster Energy sponsorship with the team and with Lewis Hamilton.

Quartararo had an opportunity to sample the Brackley's squad's F1 simulator last year, an experience he hailed as "amazing" and which whetted his appetite for a proper test.

Speaking ahead of this weekend's MotoGP round at Silverstone, the Yamaha charger confirmed that a plan was currently being put in place for him to sample a silver arrows in the future.

"About Mercedes, it’s something I’m working to, it’s not something planned yet," he said, quoted by Motorsport.com. "But of course it would be something that I would love to try.

"I’ve been to the simulator, I’ve been in the car but I’ve never had a chance to test it."

Earlier this week, Quartararo joined Hamilton in southern France for a day on the water.

"I spent a really nice day with Lewis but we were not talking about racing, just having fun on the surf and the jet ski, it was a good day," he said.

Quartararo would not be the first MotoGP world champion to test for Mercedes.

In 2019, the championship winning team rolled out one of its cars at the Ricardo Toma circuit in Valencia for Valentino Rossi as part of a ride swap between the legendary rider and Hamilton. 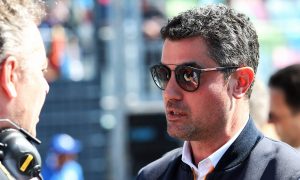