Jaguar's Mitch Evans claimed a comfortable victory in the maiden Seoul E-Prix on Saturday, round 15 of the 2021-22 ABB FIA Formula E world championship.

Evans took the lead on the first lap of the race and never looked back, holding up to a two second advantage over the rest of the field before a late full course yellow resulted in the race finishing behind the safety car.

The result means that Evans stays in contention for the title, having slashed his deficit to championship leader Stoffel Vandoorne from 36 to just 21 points, after the Belgian finished the race in seventh.

Mahindra's Oliver Rowland had taken pole position in the rain-hit qualifying session, with Venturi's Lucas di Grassi lining up alongside him on the front row ahead of Evans in third place. Vandoorne has missed out on the qualifying duels and lined up in seventh on the grid.

With his championship hopes very much on the line, Evans was on the attack from the moments the lights went out. While di Grassi successfully took the initial lead from Rowland, the Kiwi emphatically took charge seconds later.

However the real drama was taking place further back. Although the rain had stopped, the circuit was still wet from earlier rain catching out a number of cars going into turn 21 where they aquaplaned off into the barriers resulting in a seven-car pile-up. 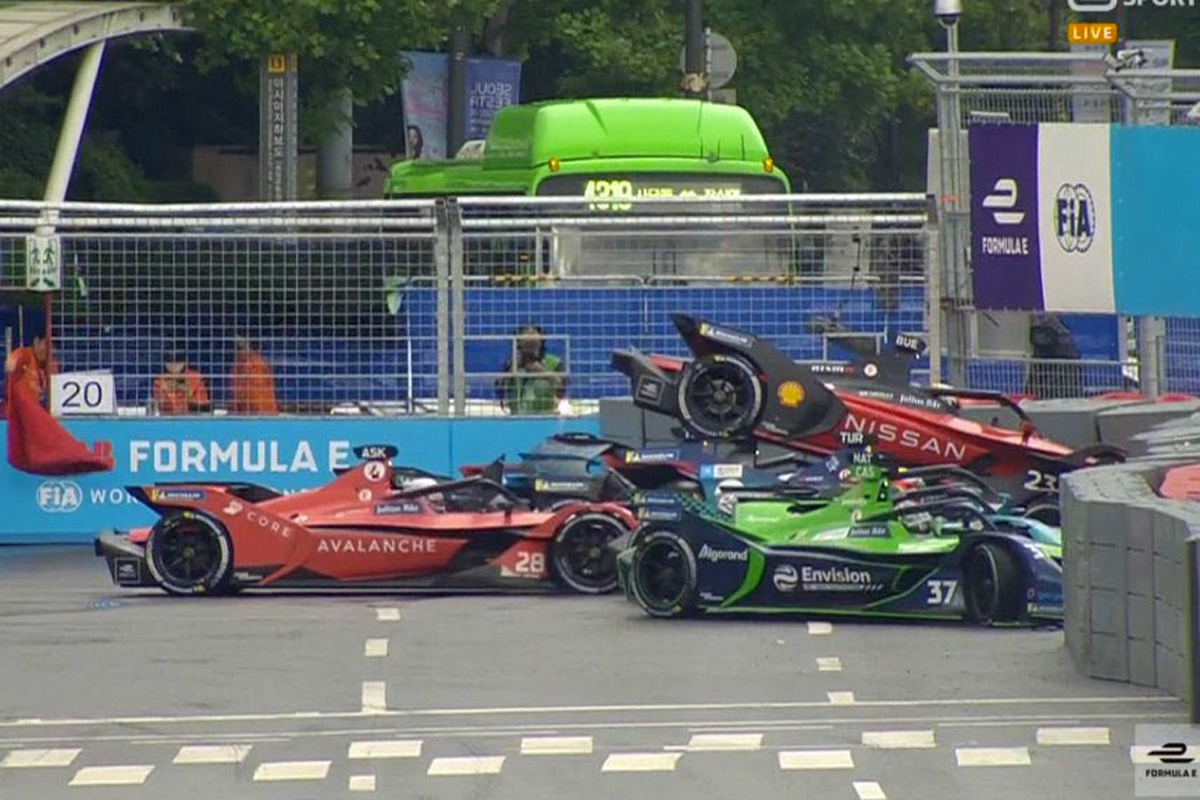 Among those affected were Norman Nato, Dan Ticktum, Nyck de Vries, Nick Cassidy, Oliver Turvey, Andre Lotterer and Oliver Askew. With de Vries' Mercedes having wedged itself underneath Buemi's Nissan (with no harm to either driver) there was an immediate red flag as marshals ran to help.

A lengthy delay ensued while the track workers cleared the scene. Cassidy and Nato were both able to get back to pit lane in a fit state to continue, but the other five cars were all too badly damaged to take their place for the restart.

When the race resumed with 43 minutes remaining on the clock, Evans restarted behind the safety car followed by Rowland and di Grassi followed by Andretti's Jake Dennis and Edoardo Mortara in the second Venturi.

DS Techeetah's Jean-Eric Vergne had improved to sixth place before the stoppage after gaining a position on Vandoorne, who was having to put safety first and protect his points lead in the championship.

When the race got back up to speed, Dennis was the first to take Attack Mode, while Mortara was handed a five second time penalty for too many changes of direction while defending from Vergne. 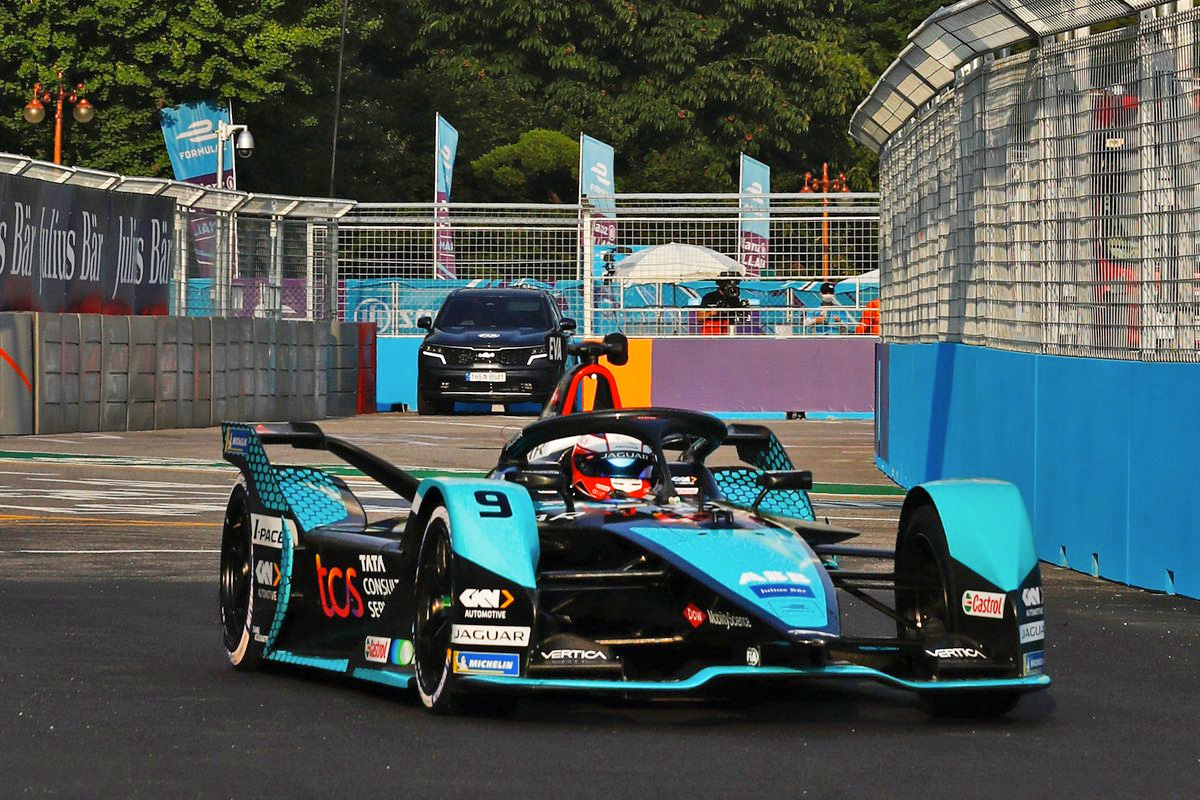 While Vergne went on to press Dennis for fourth place, Vandoorne was able to dispatch Mortara and then line up an attack of his own on the Techeetah. Further back, Antonio Giovinazzi's Dragon Penske spun after being rear-ended by Alexander Sims for which the Mahindra driver was handed a five second penalty.

Evans continued to lead, having used both his Attack Modes early to keep him 1.7s ahead of Rowland and di Grassi, with Dennis holding on to fourth after Vandoorne successfully pushed his way past Vergne to claim fifth.

Already hit by a penalty, Mortara's day (and any remaining championship hopes) ended prematurely when a left rear tyre puncture resulted in the car tapping the wall, forcing him to retire moments later.

That left Porsche's Pascal Wehrlein in seventh ahead of Robin Frijns in eighth for Envision Racing. But Sims missed out on nine place when he lost the back end of the Mahindra and slid into the barrier in the stadium section to bring out a full course yellow with the race ending behind a safety car. 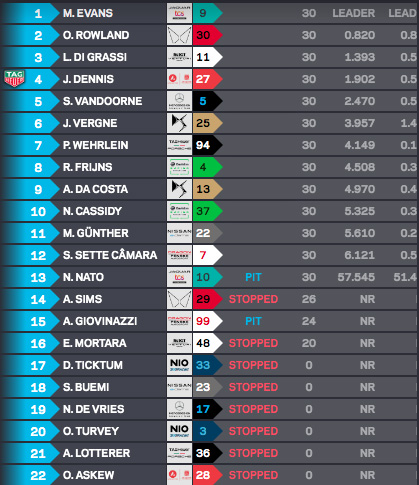 Evans' victory means he takes the championship battle to the final round tomorrow when conditions are expected to be wet. However he missed out on the bonus for fastest lap which went to Dennis leaving him 21 points behind Vandoorne going into the season finale with a maximum 29 available.

Ahead of their final Formula E race, Mercedes also retains a strong lead in the team championship with 301 points compared with Venturi's 270.