Max Verstappen looked in ominously unstoppable form in Saturday's qualifying session at Spa-Francorchamps, the Red Bull driver ending the day six tenths faster than the rest of the field.

But due to grid penalties, it's Ferrari's Carlos Sainz who will start from pole position for the Belgian Grand Prix after narrowly holding on despite a scrappy final Q3 run. Sergio Perez is set to start alongside him on the front row of tomorrow's grid.

Charles Leclerc and Esteban Ocon were next quickest in Q3 but further penalties for them mean that Fernando Alonso will pick up third on the grid, putting the Alpine alongside Lewis Hamilton, whose Mercedes team mate George Russell is set to start one place back next to Williams' Alex Albon.

The weather was cool, grey and overcast again at Spa-Francorchamps although at least the track itself was dry. There was only a very low chance of further precipitation this afternoon after the intermittent rain that had plagued free practice on Friday. Red Bull had been fully in charge at the end of Saturday morning final practice with Sergio Perez ahead of Max Verstappen, and Carlos Sainz third after his Ferrari team mate Charles Leclerc had an excursion into the gravel triggering a late red flag - fortunately with only a broken front wing to show for it.

However that incident wasn't the reason for the late start to qualifying, which was instead for barrier repairs arising from a violent accident in the Porsche Supercup support event that had bent the Armco barrier. By the time that the lights went green at the end of pit lane to get the first round underway, the session was running 25 minutes behind the scheduled start time. 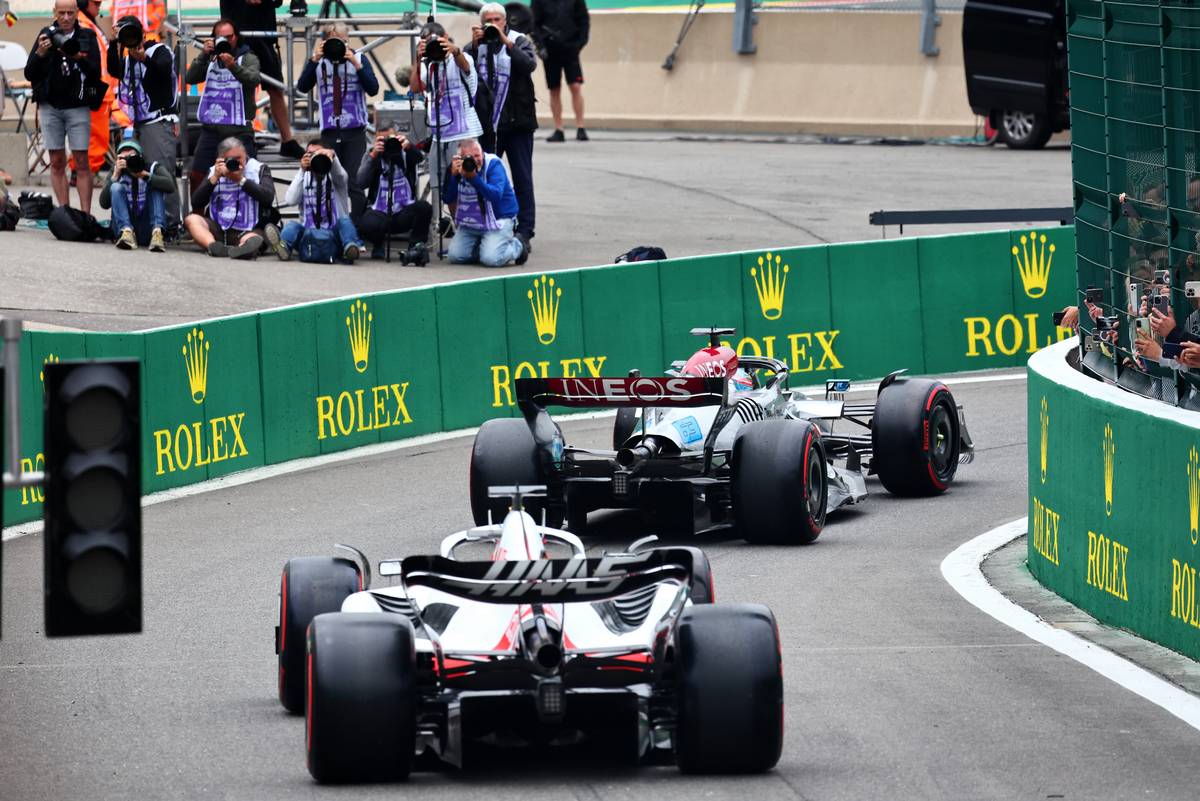 Q1: Verstappen pips Sainz and Perez in delayed first round

First out on track was Williams' Nicholas Latifi, although the medium tyres gave away the fact that it wasn't for a full-fledged qualifying run and he pitted at the end of his sighting lap. That left the field clear for Mick Schumacher to break cover in the Haas, keen to get going after losing most of FP3 to technical problems; he clocked in with a time of 1:47.929s on the soft compound.

But by now, everyone had woken up and headed out on track. Mercedes' George Russell briefly took charge of the timesheets, but Perez was then quick to improve and set a new target time of 1:45.377s, still some three tenths slower than his FP3 time. Sainz was then able to find those three tenths, but almost immediately he was knocked off the top by Verstappen's maiden Q1 time of 1:44.581s which was already nearly half a second quicker than the rest.

Leclerc's time was just within a second of his Red Bull rival for fourth, but Esteban Ocon and Fernando Alonso were almost 1.5s off the top time meaning they and the rest of the field certainly couldn't afford to rest on their laurels and still feel comfortable about progressing to the next round. The two Mercedes cars immediately went for another push lap, but Russell couldn't improve on what was now tenth place. Hamilton did find some extra pace, enough to move him up to 11th behind his team mate. but still not showing the sort of pace that the Silver Arrows had been hoping for this weekend.

After regrouping in the pits, the drivers - with the exception of the top four - were ready to head back out on track for their final flying laps of this opening round. Latifi was first to cross the line and moved up to 13th with Stroll improving to tenth, but it was Zhou Guanyu who impressed as he leapt out of the drop zone into seventh place for Alfa Romeo assuring the Chinese rookie of progressing. The Mercedes pair then finally sparked into life with Russell up to fifth ahead of Hamilton, until they were split by a stunning effort from Alex Albon which put the Williams into sixth.

As the dust settled, Schumacher had narrowly scrapped through in 15th place but Sebastian Vettel missed the cut by two thousandths of a second, along with Latifi. Kevin Magnussen was also eliminated, as were Yuki Tsunoda and Valtteri Bottas. The Finn already knew his grid position would be 14th as the driver who had incurred grid penalties but not 'back of the grid' penalties, meaning there was little more to be achieved in this session. 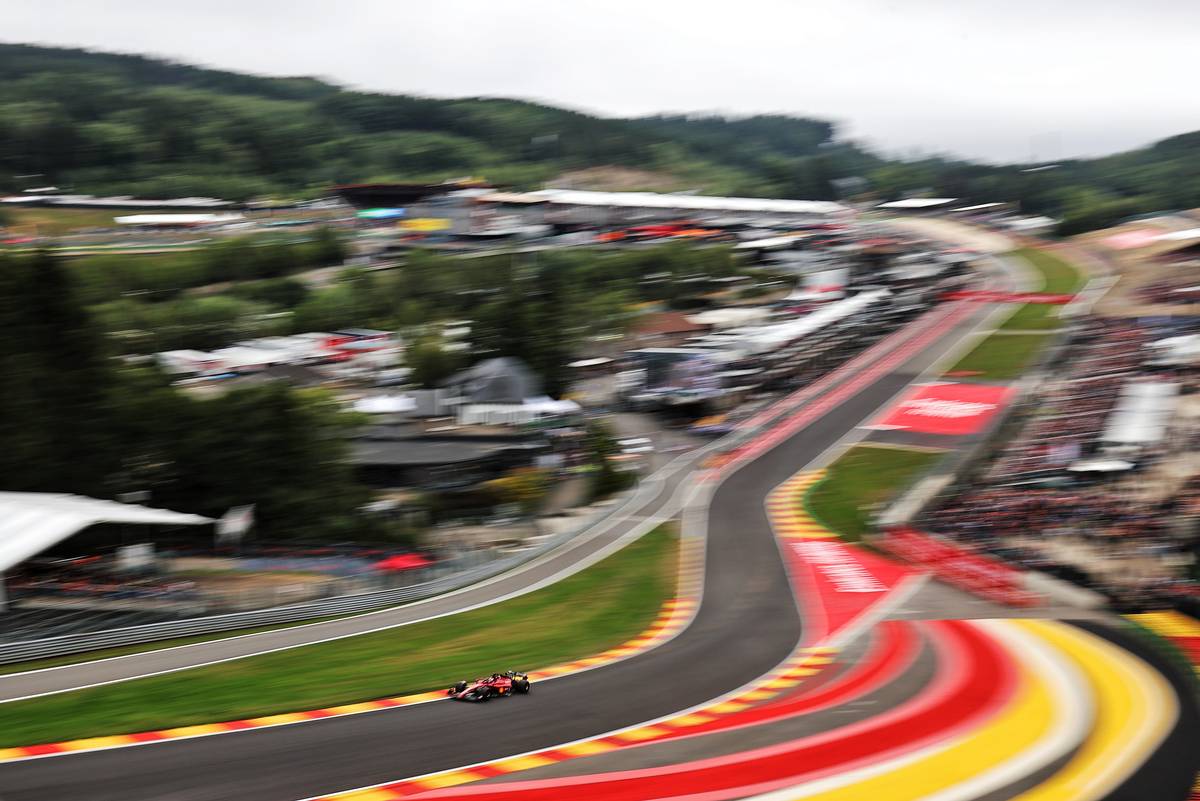 Q2: Leclerc goes quickest ahead of Verstappen and Perez

The drops of rain reported by some drivers at the end of Q1 hadn't amounted to anything as Hamilton and Russell were straight back out on track when the lights went green for the start of the second round. They were on used softs for an early banker lap, perhaps betraying anxiety in the team about whether they would be able to make it through to the final top ten pole shoot-out round.

Hamilton set the first time of the session with a 1:46.622s, but Russell was nearly four tenths quicker with his first run. Neither were on the same planet as Verstappen who posted a time of 1:44.723s, also on scuffed softs. His team mate Perez nearly matched it and was just 0.071s slower - but that was on a new set of the same compound.

Sainz was almost seven tenths behind the Red Bull in third followed by Ocon and Lando Norris, with Leclerc into sixth despite a huge slide across the curbs in the final corner. It was still enough to put him ahead of Alonso, Russell and AlphaTauri's Pierre Gasly. That left Hamilton on the bubble in tenth and Albon, Zhou, Stroll, Schumacher and Daniel Ricciardo all in grave danger of elimination, the Australian yet to complete a timed lap.

The Alpine pair were first to get back to it, Ocon leading Alonso. The Mercedes drivers held back to find some space on track, with Albon last to emerge and Red Bull happy to sit this one out. Ocon's purpose was to give Alonso a tow up the hill, but the timing didn't come together as well as the team might have hoped. It was still enough to promote the Spaniard to fifth, one place behind Ocon's earlier effort. Gasly also improved only to be quickly ejected from the top ten by a flurry of late fliers: Hamilton and Russell moved ahead of Ocon and Alonso, and Norris made it through in ninth ahead of an impressive effort from Albon which saw the Williams take tenth place at the cost of Ricciardo.

As well as Ricciardo and Gasly, it was the end of the qualifying road today for Zhou, Stroll and Schumacher who failed to improve after locking up on his final run. At the other end of the table, Leclerc put together a strong final run to show the Red Bulls that today's battle was far from over, successfully taking the top spot with a lap of 1:44.551s which was 0.172s quicker than Verstappen who was watching on from the Red Bull garage. Of course, neither would be claiming pole position today whatever happened because of their 'back of the grid' penalties. So who would inherit the crown in their stead? 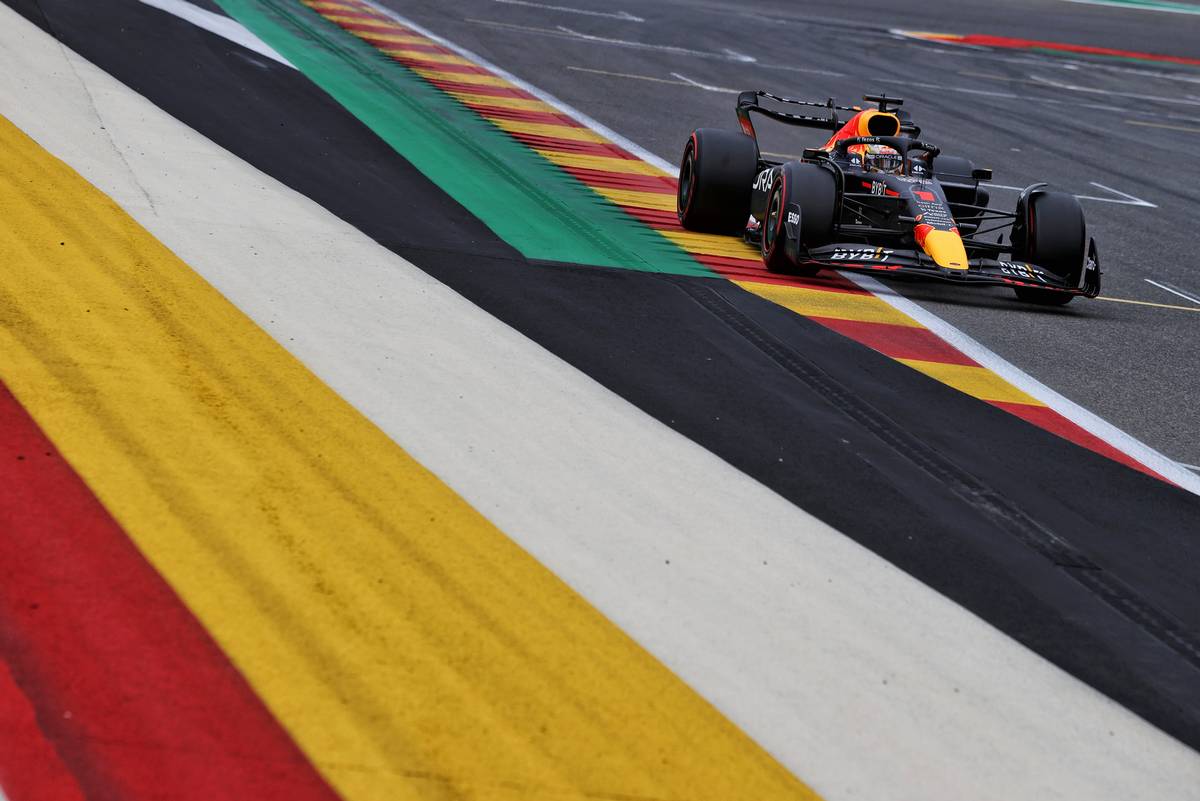 Q3: Verstappen flies to the top, but Sainz clinches pole from Perez

Happy to make it into the final round, Albon set the first time of Q3 with a lap of 1:46.369s. The Red Bulls immediately went a whopping two seconds quicker, Verstappen going top with a lap of 1:43.665s putting him far ahead of Sainz, Perez, Ocon and Norris, leaving Russell only sixth ahead of Albon and Hamilton. But there was consternation at Ferrari: they had sent Leclerc out on new tyres instead of a set of used in order to help out Sainz with a tow. Making the most of the situation, Leclerc managed to go fourth fastest.

Verstappen and Norris called it a day at this point, leaving the drivers without penalties to fight it out over pole, but Leclerc was back out to try and help Sainz with a tow up Eau Rouge and along the Kemmel Straight. Sainz had been unsettled by jostling with Alonso on the out-lap, which might have contributed to his straying into the gravel on his push lap leaving him half a second slower than his existing lap time. Fortunately for Sainz, Perez was also unable to find any extra speed and remained a tenth and a half slower than the Ferrari.

It meant that despite Verstappen's scintillating lap - six tenths quicker than anyone else - it was Sainz who had clinched pole position from Perez, with Leclerc and Ocon next on the timesheets but both heading to the back of the grid on Sunday. That will mean promotions for Alonso, Hamilton, Russell and Albon, who is set to start from sixth place once race control have figured out how all the penalties play out.