Max Verstappen always looked favourite to clinch pole position for his home Grand Prix this weekend, but in the end the Red Bull was pushed hard all the way in the final seconds of Saturday's qualifying session at Zandvoort.

Verstappen's best Q3 time of 1:10.342s was just enough to keep him ahead of the two Ferrari drivers, with Charles Leclerc and Carlos Sainz both within a tenth of a second of the Red Bull as the chequered flag came out.

A late spin by Verstappen's team mate Sergio Perez meant that Mercedes pair Lewis Hamilton and George Russell were unable to complete a final flying lap and will start from P4 and P6 respectively in tomorrow's race.

It was a lovely hot and sunny day beside the seaside as the teams prepared for qualifying for this weekend's Dutch Grand Prix at Zandvoort. With no prospect of rain, it was perfect conditions for going racing. 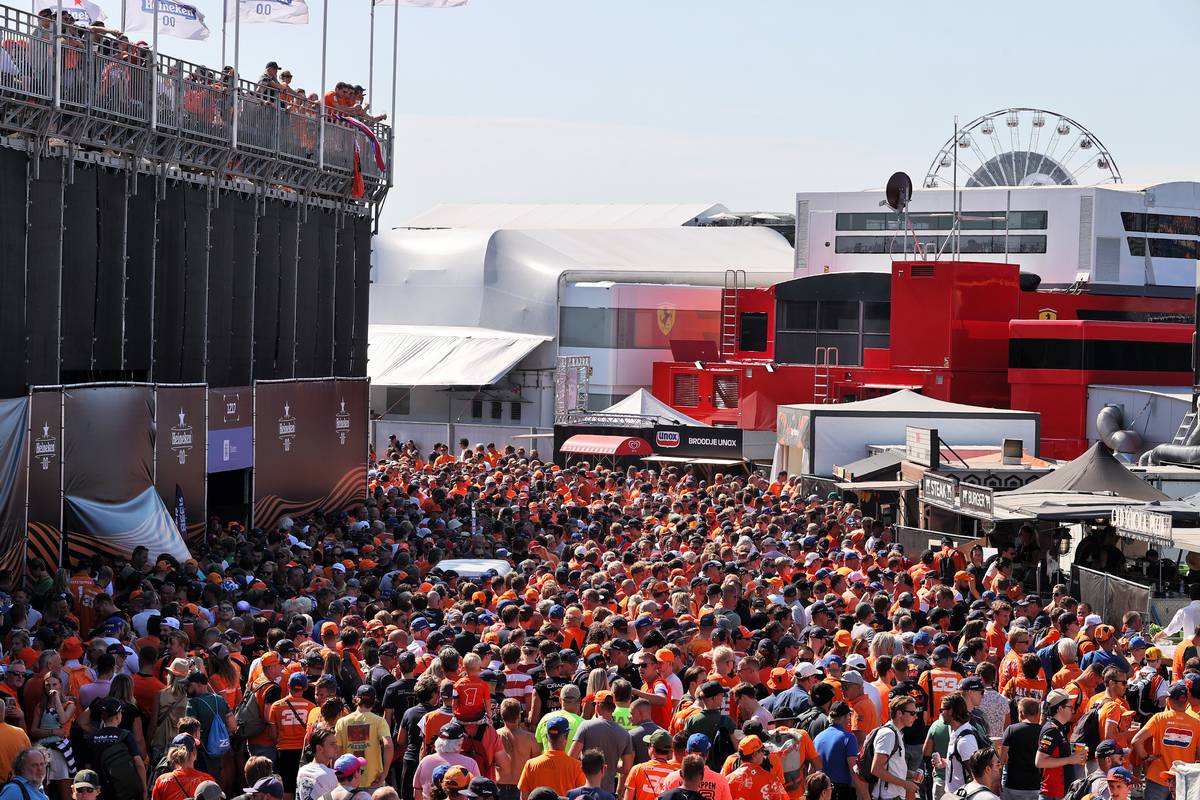 After a slight pause, the two Haas drivers were first to hit the track when the lights at the end of pit lane went green, and they were soon joined by the drivers from Alfa Romeo, AlphaTauri and Williams. The pacesetter of this early motley collection of cars was Zhou Guanyu with a time of 1:12.641s, followed by Kevin Magnussen and Mick Schumacher and then Valtteri Bottas initially in fourth.

The Aston Martin drivers were next to check in, Lance Stroll going top by half a tenth from his team mate Sebastian Vettel. But the man that the crowds were here to see - Max Verstappen - was next up and he took top honours with a time of 1:11.317s. Despite a bit of a scare in the final corner, it was a full second quicker than his Red Bull team mate Sergio Perez. Into this gap slotted Carlos Sainz and Charles Leclerc, and then McLaren's Lando Norris further split the two Ferraris for third place, before the Mercedes drivers checked in with George Russell second and Lewis Hamilton third.

However the track was rapidly evolving once the sand blown in from the neighbouring dunes had cleaned off the racing line, allowing cars to go quicker with each subsequent moment. Leclerc soon improved to second ahead of the two Silver Arrows, with Perez improving to fifth putting him ahead of Fernando Alonso. That left Sainz in seventh and Yuki Tsunoda up to eighth on his second set of soft tyre ahead of Zhou and Stroll. 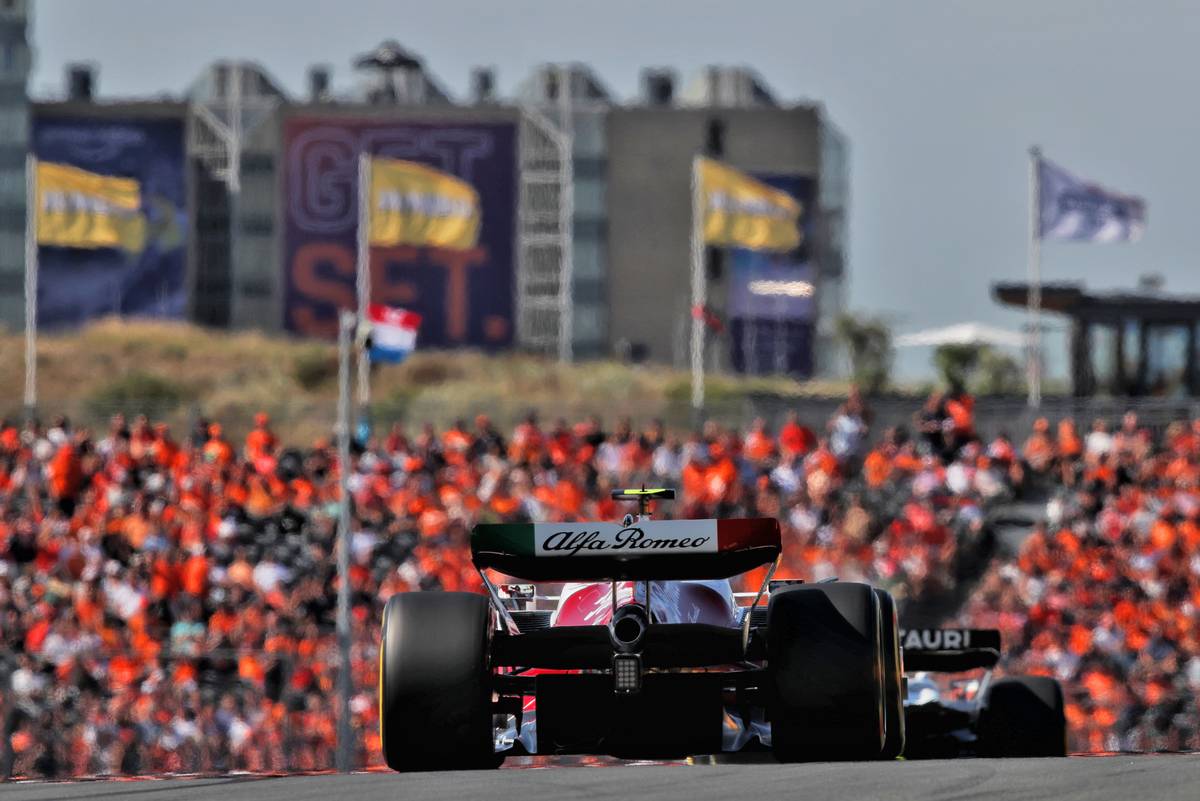 Alex Albon was next to move on to a fresh set of tyres and was duly rewarded by taking seventh place, with Schumacher also improving to eighth showing there was still plenty of pace to come from the track. Sure enough Stroll then popped up to fourth, and Vettel looked set to join him before being forced to abort his lap after running wide into the gravel at the final corner. Tsunoda then punched in a time good enough for second place, underlining the fact that almost no one could feel entirely safe in the final seconds before the chequered flag.

The one exception - the man who was very safe indeed - was Verstappen, whose initial time remained good enough for the top spot by 0.014s from Hamilton's latest flier which left Tsunoda in third from Leclerc, Norris and Russell. At the other end, Sainz didn't get to put in a new lap but squeezed through in 14th anyway ahead of Zhou, while Bottas just missed out and was eliminated along with Kevin Magnussen, Daniel Ricciardo, Sebastian Vettel and Nicholas Latifi.

Just half a second covered the first fifteen drivers, meaning that - despite playing no further part in the session - Bottas had finished just 0.644s behind P1. Even allowing for the short nature of the circuit, this underscored how close everyone was this weekend. 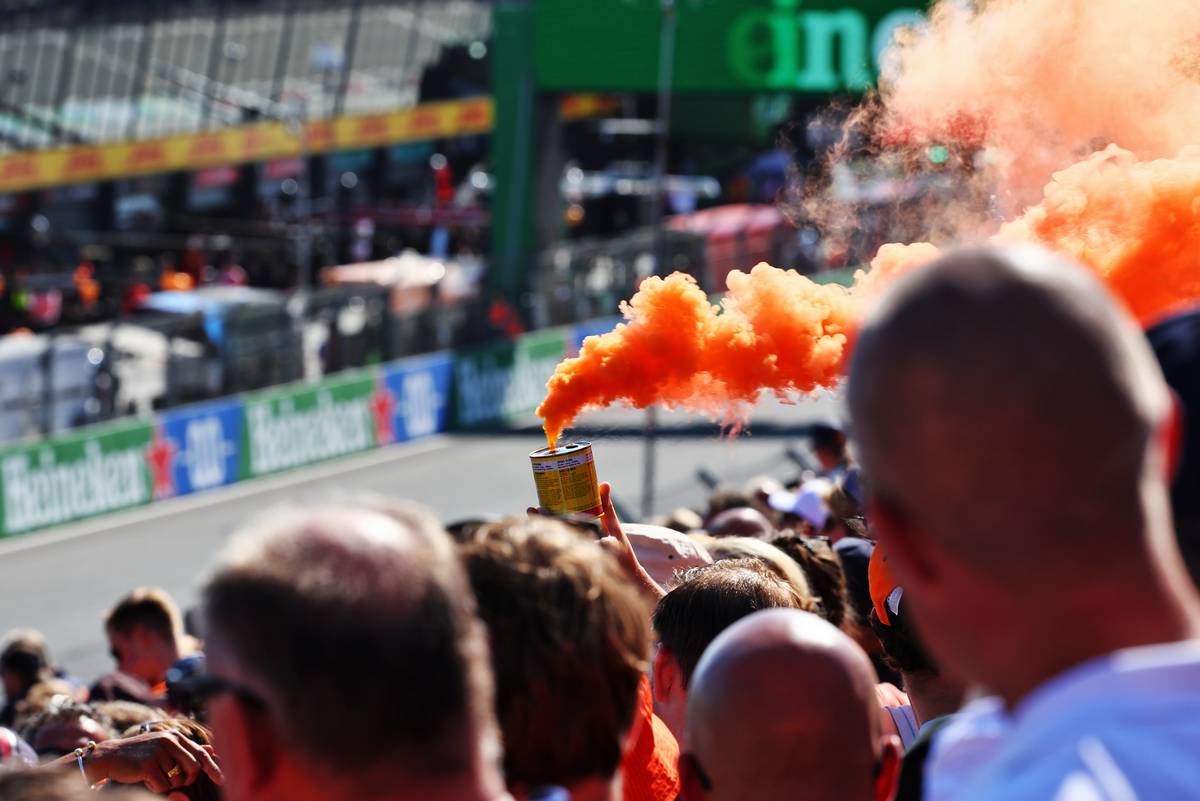 Q2: Sainz and Russell quicker than Verstappen, but both Alpines miss the cut

Alex Albon had just left pit lane at the start of the second round when the session was red flagged for a flare that had landed on the track. Even before the marshals could clean it up, it had blown away and Albon was more distracted by the number of birds cooly strutting around the periphery: "There are a ton of pigeons around," he complained on the Williams team radio. Moments later the marshals were redeployed to do their best to shoo them away before the session resumed.

Albon was first (and indeed only) car in line on pit lane waiting for the session to resume, with a little over a minute lopped off the session time. The Red Bulls also decided to leap straight into action, likewise on used soft tyres to put in an early banker lap to guard against being caught out by any further interruptions. Albon's 1:12.078s offering was quickly put in its place by Verstappen's latest lap clocking in at an impressive 1:10.927s with Perez second, slower by just under four tenths.

As more drivers completed flying laps, Hamilton went second with Russell just behind Perez in fourth. Leclerc was fifth ahead of the two Ferraris of Sainz and Leclerc. An impressive run by Stroll then put the Aston up into fourth ahead of Russell pushing Albon in ninth ahead of Pierre Gasly who was currently also provisionally safe in the top ten. That left Ocon, Zhou, Tsunoda and Schumacher at risk of elimination along with Alonso who was yet to set a time. When he did, he moved into eighth place, thereby consigning Gasly into the drop zone in the process. 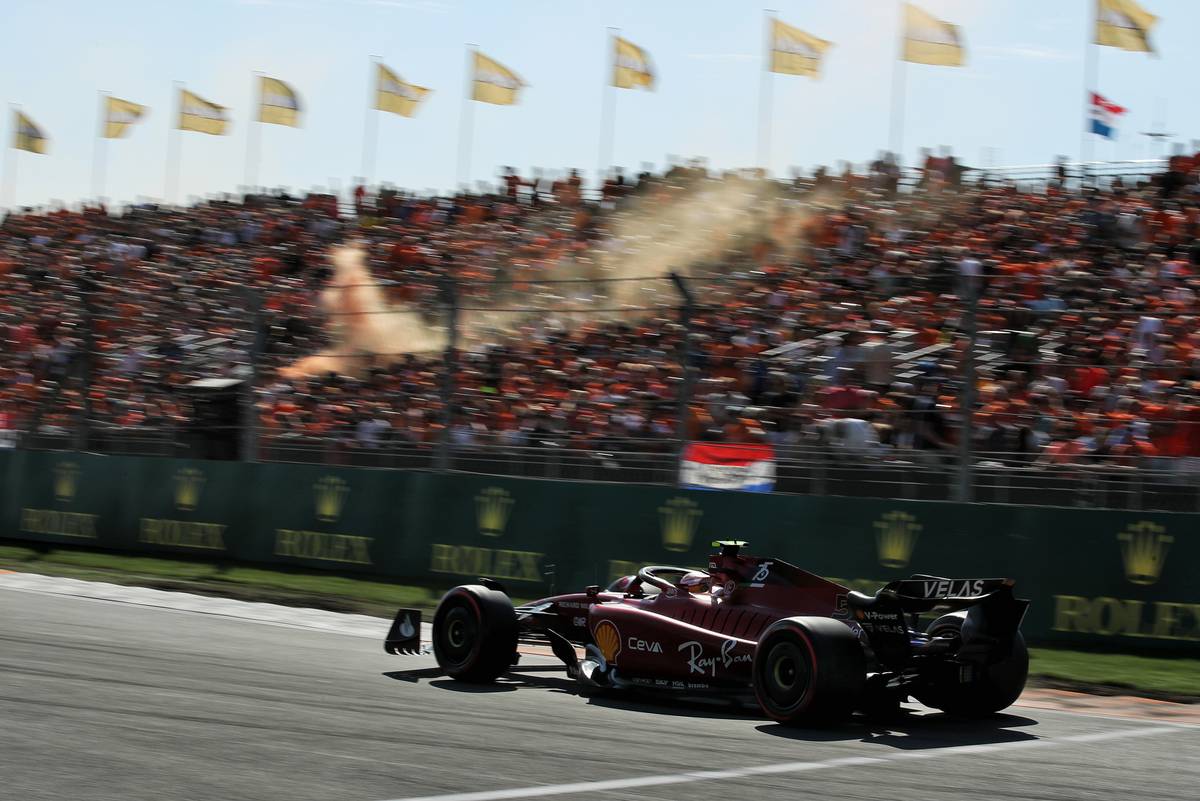 There was still plenty of time for everyone to make another run, although track evolution was not quite as pronounced this time and the top three - Verstappen, Hamilton and Perez - didn't feel the need to stir themselves. On such a short track, traffic was inevitably a problem for those who were out and badly needed to find improvements to secure their progression to the final top ten pole shoot-out round.

Leclerc certainly found some extra pace to go second, still 0.061s behind Verstappen. Despite being one of those to have hit traffic on his out lap, Sainz went quicker still to take the top spot from Verstappen, with Russell then slotting into second by one hundredths of a second from the Spaniard. By the time the dust and sand settled, the inactive Hamilton had been pushed down to fifth ahead of Norris, Perez, Stroll, Schumacher and Tsunoda, leaving the Japanese driver's team mate Gasly on the wrong side of the cut line together with the Alpines of Ocon and Alonso as well as Zhou and Albon.

Alonso was particularly unhappy with the outcome, complaining that he had been impeded by Perez. However replays suggested that the Red Bull had done what he reasonably could to get out of the way and any suggestion of a penalty for the Mexican appeared unlikely. 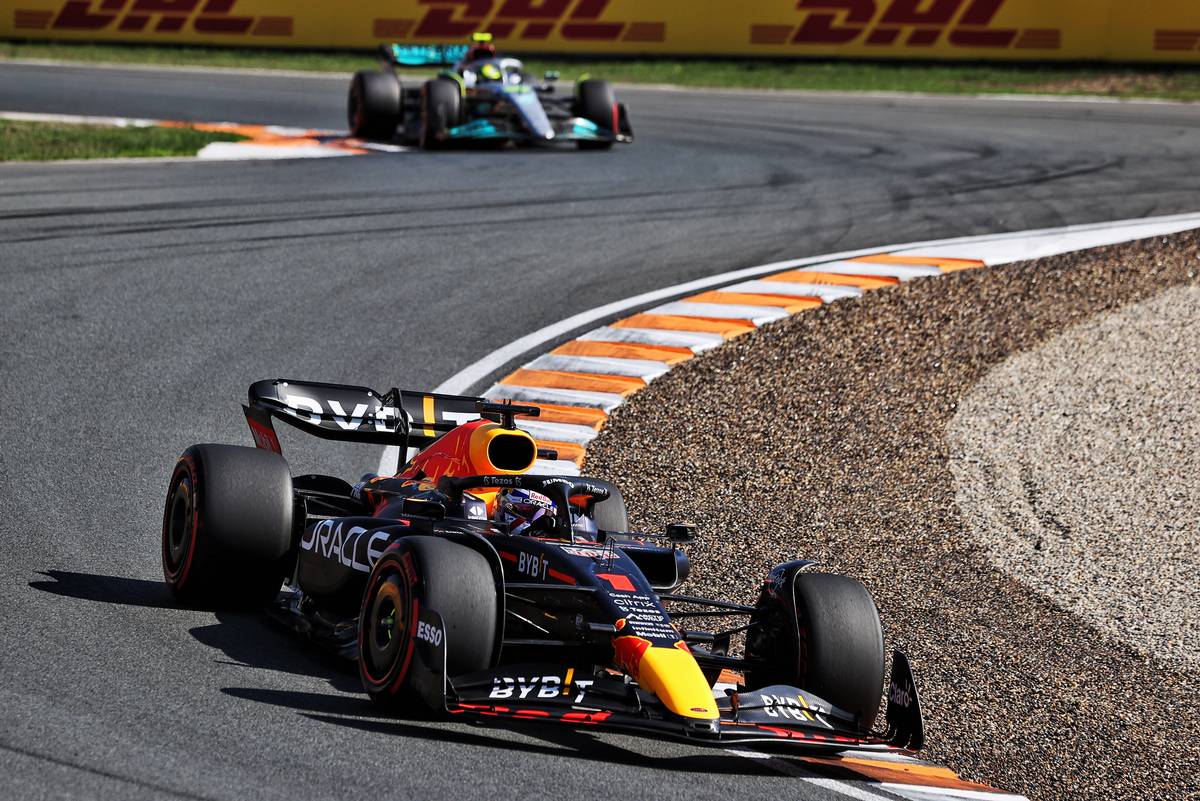 Q3: Verstappen fends off threat from Leclerc and Sainz as Perez spins at the end

To the delight of the orange-clad fans packed into the grandstands and singing their hearts out, Verstappen was first to head out on track and this time there was no mucking about on used tyres - it was a fresh set of the shiny soft compound for the Red Bull while behind him Schumacher, Tsunoda and Norris were all making an initial run on second hand rubber.

Verstappen's 1:10.515s was the best time of the weekend so far despite a small error on the way suggesting better still to come. It was more than half a second clear of Perez in second, but the Mexican had himself been on a used set as was Norris over a full second slower still. Next up on new tyres was Hamilton whose time was good enough for second place, and then Leclerc went quicker still (also on new tyres) to take provisional pole by 0.059s from Verstappen. Sainz slotted into fourth ahead of Perez and Russell, with Norris followed by Tsunoda and Schumacher. Stuck in the pits with a technical issue was Stroll, who would have to settle for P10 on tomorrow's grid as a consequence.

Just under three tenths covered the top four, and Perez and Russell had been on used tyres suggesting that all six were still in contention for pole position as the drivers regrouped and came out for their final runs of the afternoon. Leclerc was first on track followed by Norris and Schumacher, with all eyes on Verstappen who was running ahead of Sainz and Perez. Mercedes left it late, Hamilton heading Tsunoda and Russell to the line as the chequered flag came out. 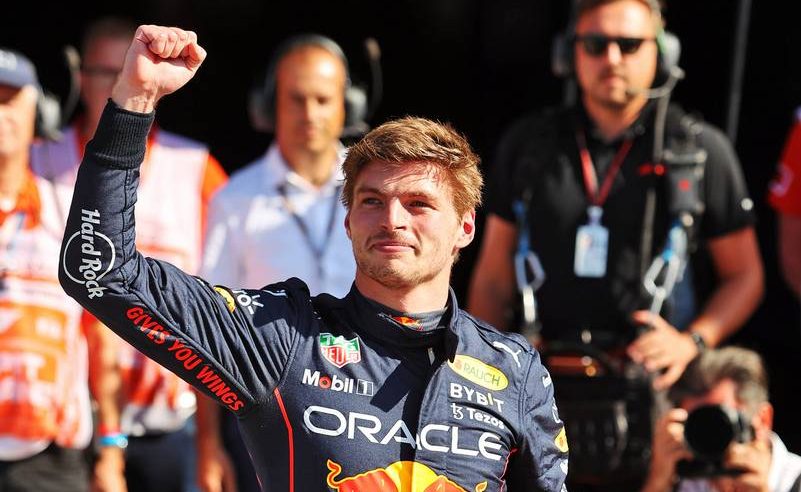 Leclerc went purple in the first sector but lost time in the middle sector, while Verstappen was slower at the start but then put in a thumping middle sector. It meant that he just managed to clinch pole with a time of 1:10.342s which was 0.021s quicker than Leclerc, followed closely by Sainz. Behind them there was a spin for Perez at turn 14 that forced the final drivers to back off because of yellow flags. It left Hamilton in fourth and Russell in sixth, with Norris also unable to improve meaning he remained seventh ahead of Schumacher and Tsunoda.

The roar from the grandstands confirmed that there could have been no more popular outcome today than Verstappen securing his second consecutive home pole as his march to a second world championship continued in impressive style.