Mercedes proved to be the masters of the wet conditions at Suzuka on Friday, with George Russell and his team mate Lewis Hamilton topping the timesheets in the second free practice session for the Japanese Grand Prix.

Red Bull pair Max Verstappen and Sergio Perez were closest to the Silver Arrows pair and the only other drivers within a second of Russell, but the times were largely irrelevant and down to the luck of the draw about the conditions when the drivers made their runs.

A number of drivers including Perez, Charles Leclerc and Yuki Tsunoda had brief wayward moments during the session, which had been extended to 90 minutes to allow for a Pirelli 2023 tyre test that was ultimately postponed due to the rain. 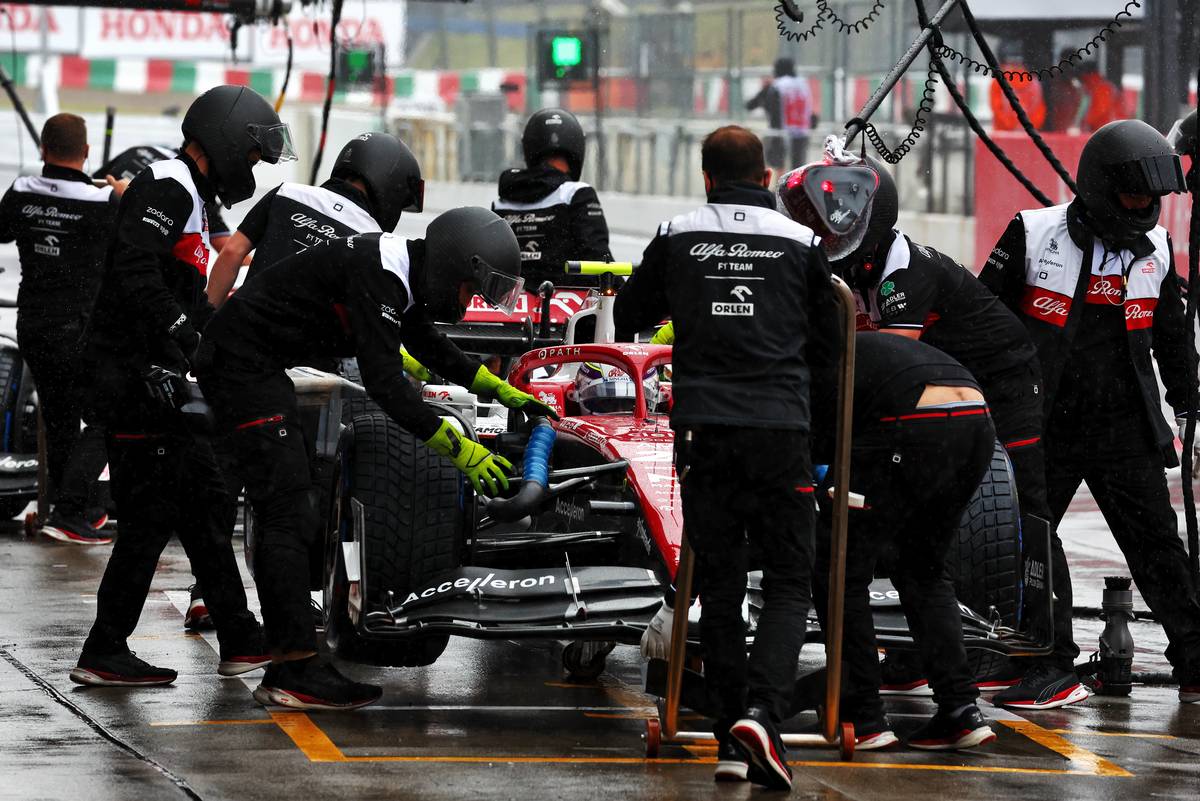 It had been a cold, grey and wet first practice at Suzuka, with only a brief window of opportunity allowing teams to upgrade from full wet tyres to intermediate, meaning that best times had been the result of good timing rather than superior pace and performance with Fernando Alonso coming out top for Alpine. Conditions were little better for FP2, with the drizzle persisting and the track sodden once more, to the exasperation of Pirelli which had been planning to have an extra half hour of testing for its 2023 slicks. The test would now move to Mexico at the end of the month, but the extra 30 minutes would remain.

A number of drivers were sitting in their cars when the lights went out at the end of pit lane to get the session underway, but there was a short pause before Nicholas Latifi actually rolled out of the Williams garage to get started on full wets. He was quick to report back: "There's a little stream at turn 8, but everywhere else is okay for inters." He went on to set an essentially irrelevant time of 1:52.233s which was soon eclipsed by Carlos Sainz who was 2.6s quicker as the next man to complete a timed lap. Daniel Ricciardo (McLaren) and Alex Albon (Williams) were also circulating, all on the wet compound; they were not as fast as the Ferrari but both were quicker that Latifi, who entertained the soaked crowds by running on at the final chicane. That might have changed his view on inters; certainly Sainz was saying it was far too soon for them. 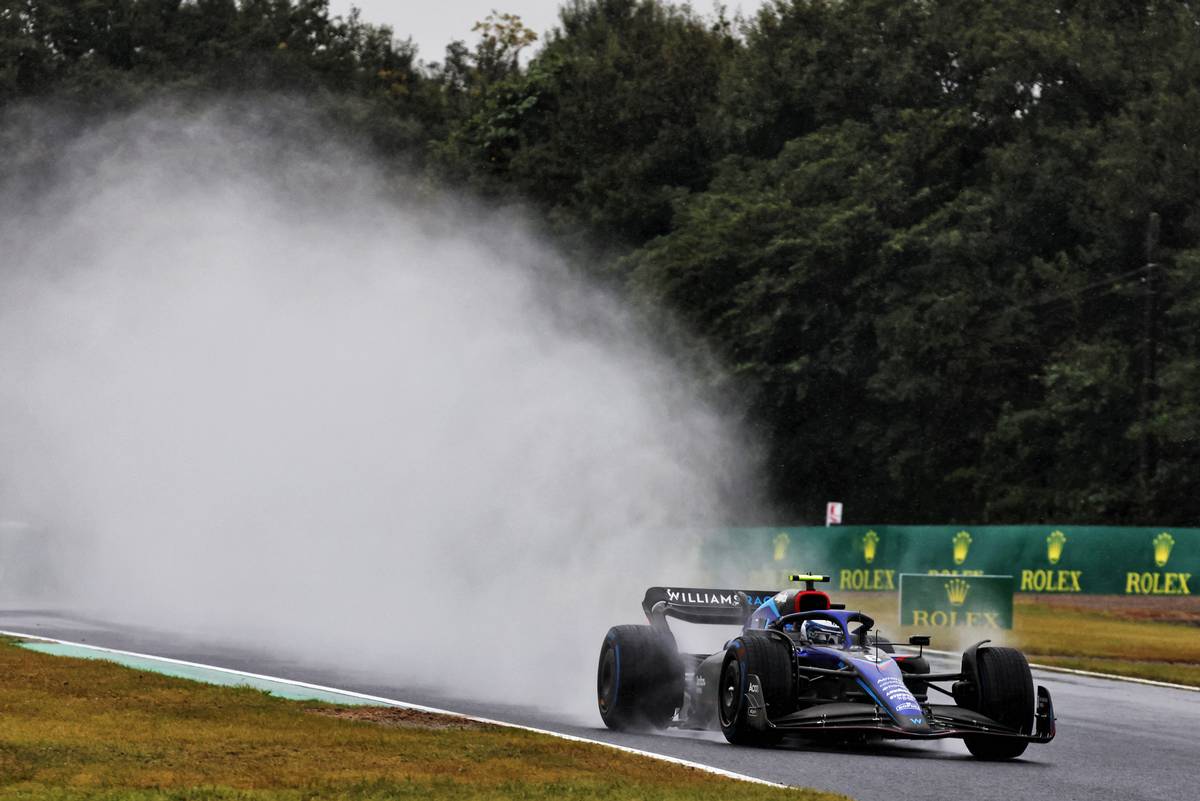 George Russell was next out, having lost time in FP1 while Mercedes completed an engine change after finding an oil leak. He'd had a shakedown in first practice but was now keen on making up lost time in the extended second session. Kevin Magnussen emerged not long afterwards, the only Haas in the session because of Mick Schumacher's crash after the chequered flag at the end of FP1 had which had forced the team to move to a new chassis when the initial monocoque safety cell was found to have been damaged. After that, Lando Norris (McLaren) and Zhou Guanyu (Alfa Romeo) made it eight cars to have braved the conditions in the first 20 minutes. While no one was able to catch Sainz' initial 1:49.615s, Norris and Ricciardo were closest. Asked how the track was, Norris' reply was succinct: "Wet!"

With the weather showing little sign of changing, more drivers grudgingly headed out including Lewis Hamilton and AlphaTauri pair Yuki Tsunoda and Pierre Gasly. Hamilton was able to depose Sainz from the top of the timing screens by a tenth, but his team mate Russell was the first man to switch to a new set of inters and he immediately went almost 2.6s quicker with a lap of 1:46.891s - although it was clearly tricky to hold on at points as he subsequently ran wide at the exit of Degner. Even so, everyone was now choosing the inters for their next runs - or first, in the case of those just joining the action such as Aston Martin pair Sebastian Vettel and Lance Stroll. Even Valtteri Bottas had shrugged off his raincoat to climb into the cockpit of the Alfa Romeo. With a little over 35 minutes gone, it was finally time for Charles Leclerc and Red Bull pair Sergio Perez and Max Verstappen to turn a wheel as well. 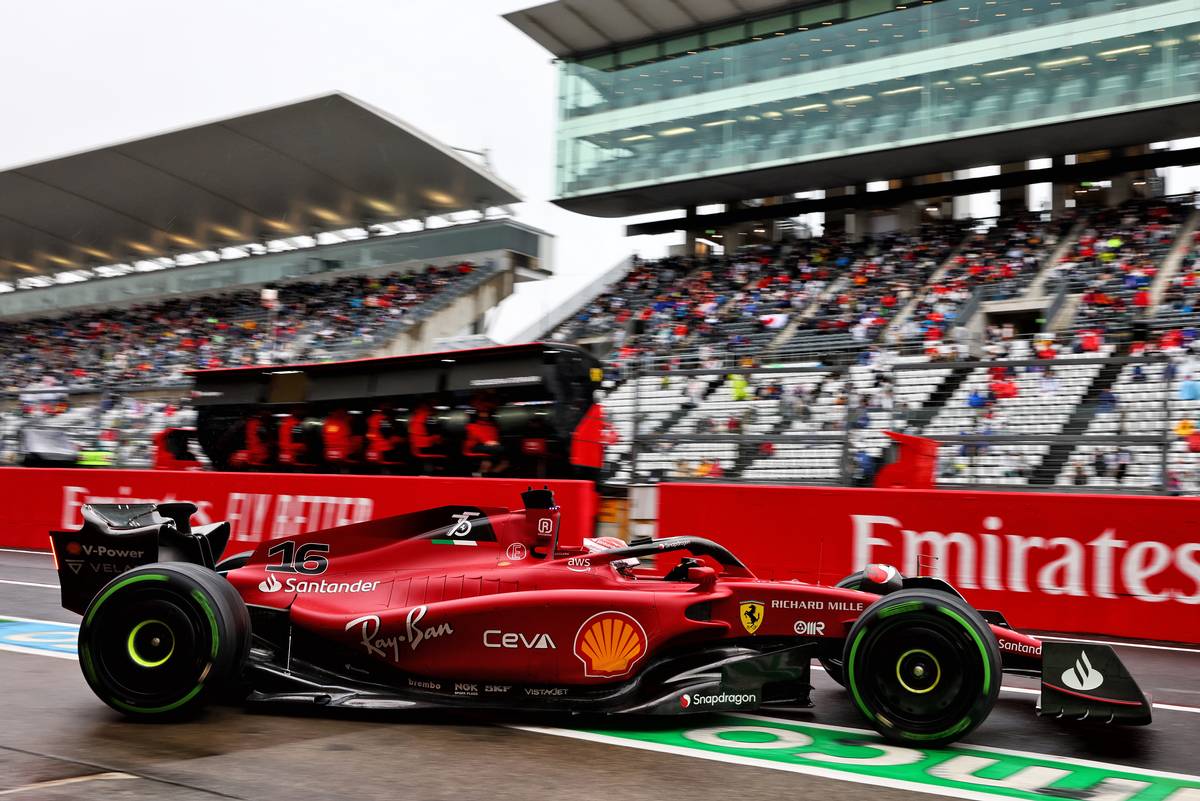 After some confusion during his pit stop (where only three intermediate tyres were ready for him initially), Tsunoda had more problems when he went into Degner too hot and sailed off into the gravel. Fortunately the speed helped him avoid getting beached. Also having trouble with Leclerc, who went off at turn 1 and narrowly missing hitting the barrier as he tip-toed his way out of the gravel. It had done his left front tyre no good, and his first laps after that were slow as a result. He was only sixth fastest by the time he came back to pit lane for investigation into a suspected brake issue. Perez was also finding it hard to find any speed at this point of the session and was still outside the top ten by the time he also came back in.

Verstappen was enjoying more success with his initial laps to go top with a time of 1:43.571s, seven tenths quicker than Hamilton's latest effort. The Briton improved again next time around to retake the top spot albeit only by 0.035s. Verstappen soon jumped back to the top, and then it was Russell's turn to set a new fastest lap time of 1:42.968s as the track improved thanks to the cars clearing a slightly drier line with their constant running and the drizzle finally easing off. 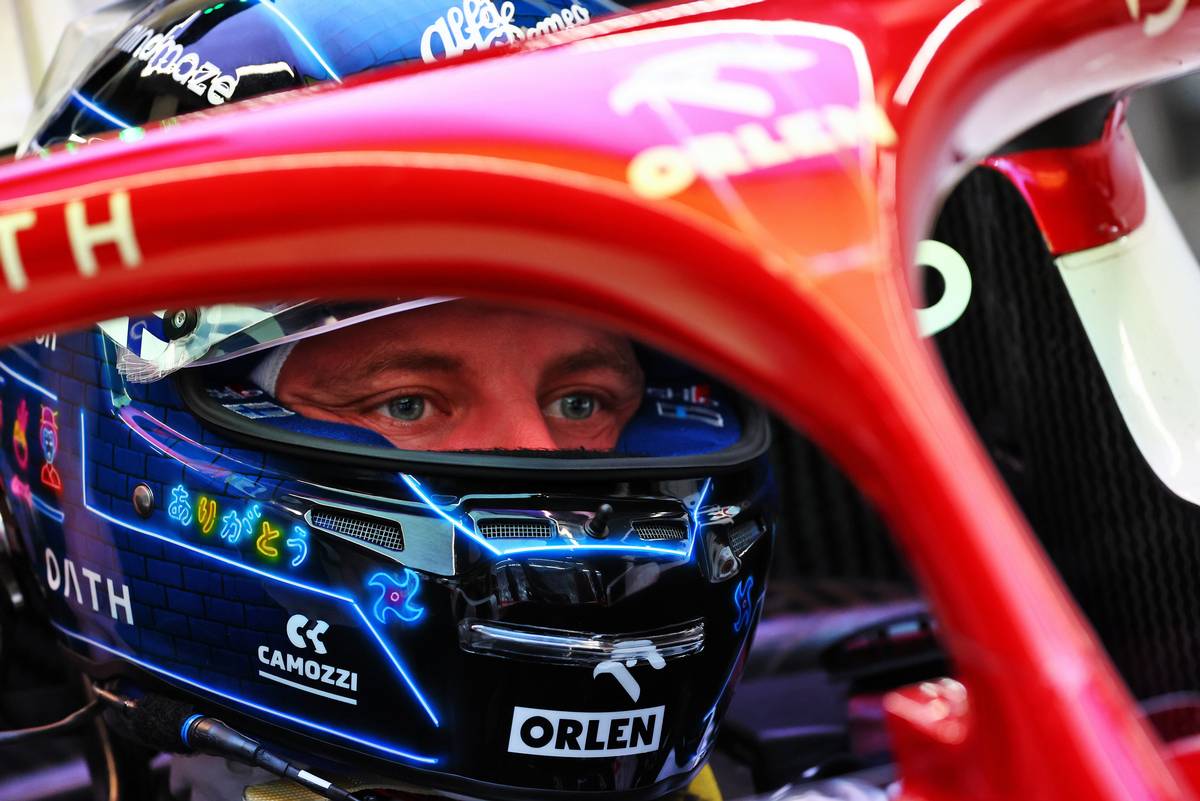 Sure enough, Russell's next run moved the goalposts once more as it clocked in at 1:41.935s putting him closer to the time identified by Pirelli as the crossover point between the inters and slicks. By now, all the drivers (bar Schumacher) had been out, FP1 pace setter Fernando Alonso the last to emerge and immediately into the top six with his first timed run in the Alpine. Leclerc was also back in action but still unhappy with the handling at the front of the F1-75, reporting: "The feeling is totally bad for some reason. I will try to make it better", but his lap was no improvement on his earlier effort. Perez had moved up to fourth just behind Verstappen while continuing to struggle, running off at the hairpin but avoiding getting stuck in the wet gravel.

Into the final 'extra' half hour, the rain was threatening to pick up again. Hamilton was back out on a new set of intermediates but looked to be fuelled for a long distance stint, while Sainz was reporting degradation on both the front and rear tyres of the Ferrari, and Verstappen was frustrated by a lack of grip toward the end of his long run. Missing from action for a spell was Magnussen as the Haas mechanics implemented significant set-up changes, but once he got back out in the final five minutes he shot up to fifth place ahead of Sainz. McLaren appeared to have called it a day despite limited running, with Norris P16 and Ricciardo P17 having been kitted out with the new sidepod upgrades first trialled by his team mate last week in Singapore. 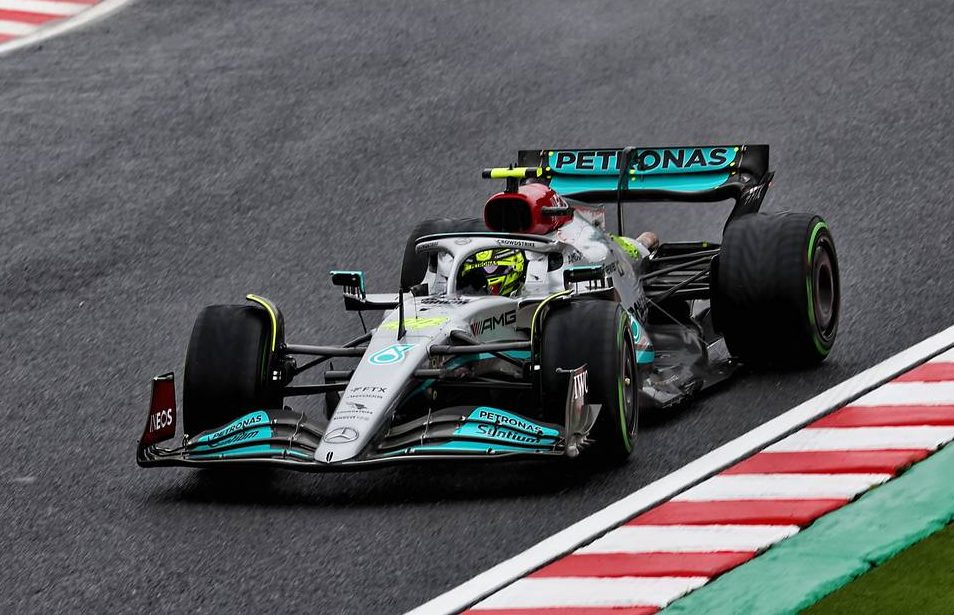 In fact the track was getting quieter, with teams wary of not wanting to run through their limited sets of wet weather tyres ahead of Saturday and Sunday in case the weather proved equally dismal at any point. It meant that Russell remained fastest ahead of Hamilton, with Verstappen and Perez all within one second of each other as the chequered flag came out. They were followed by Magnussen, Sainz, Alonso, Bottas, Ocon and Zhou, with Leclerc dropping to 11th. Latifi and Albon were next, and then it was Tsunoda, Vettel, Norris, Ricciardo and Stroll with Gasly slowest of the 19 runners, a little over five seconds behind Russell's top time..